Travel by colour: a rainbow journey around the world

A colour popping, destination hopping celebration of the planet’s most vibrant places

Sunbathing beside a limoncello yellow parasol. Drinking in a burnt orange sunset over impossibly blue waters. Seeking shade beneath verdant green palm trees. Many of our most memorable travel experiences are linked to colour, thanks to the varying psychological influences different shades can have on our mood – from calming blues and greens to uplifting yellows, colourful destinations can help trigger positive emotions. A symbol of love, diversity, and equality, follow all the colours of the rainbow this Pride Month and beyond…

From Scandi cabins and Parisian cafés to Japanese shrines and Bhutanese robes. 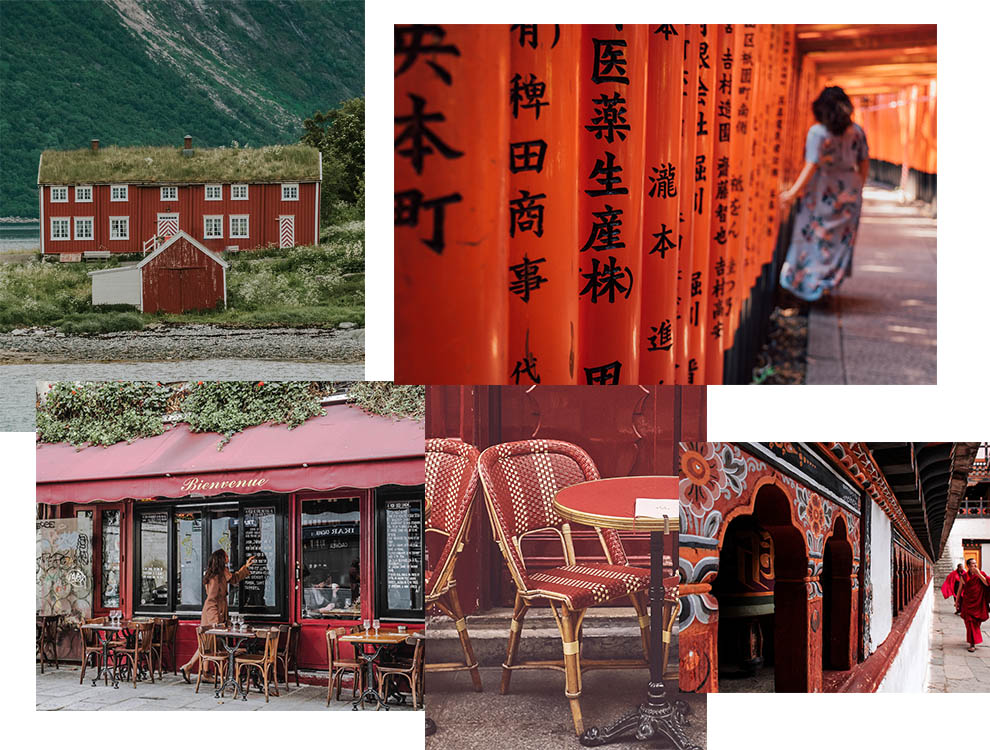 Norway…This untamed Scandinavian landscape is scattered with rustic red cabins, traditionally known as rorbuer. Originally built as fishermen’s homes in northern Norway, you’ll find most of these cosy shelters stand out from the surrounding wilderness in red (the most affordable paint at the time).

Paris, France…Take a stroll through the French capital and you’ll begin to notice that red is the most popular colour choice for the bistro chairs sitting prettily outside café after café. The Parisian café culture is for those who like to see and be seen, so pull up a seat and order café au lait on repeat.

Kyoto, Japan…Stroll through a red tunnel of vermilion torii gates at Fushimi Inari Shrine, an important Shinto shrine in southern Kyoto. While most visitors come to explore the wooded trails surrounding the sacred Mount Inari, the shrines themselves are a must-see.

Paro, Bhutan…The maroon Kasaya robes of Buddhist monks in Bhutan is a shade you’ll also find on many brightly painted façades in the Paro Valley, with clusters of colourful farm houses decorated in traditional Bhutanese style to be seen. 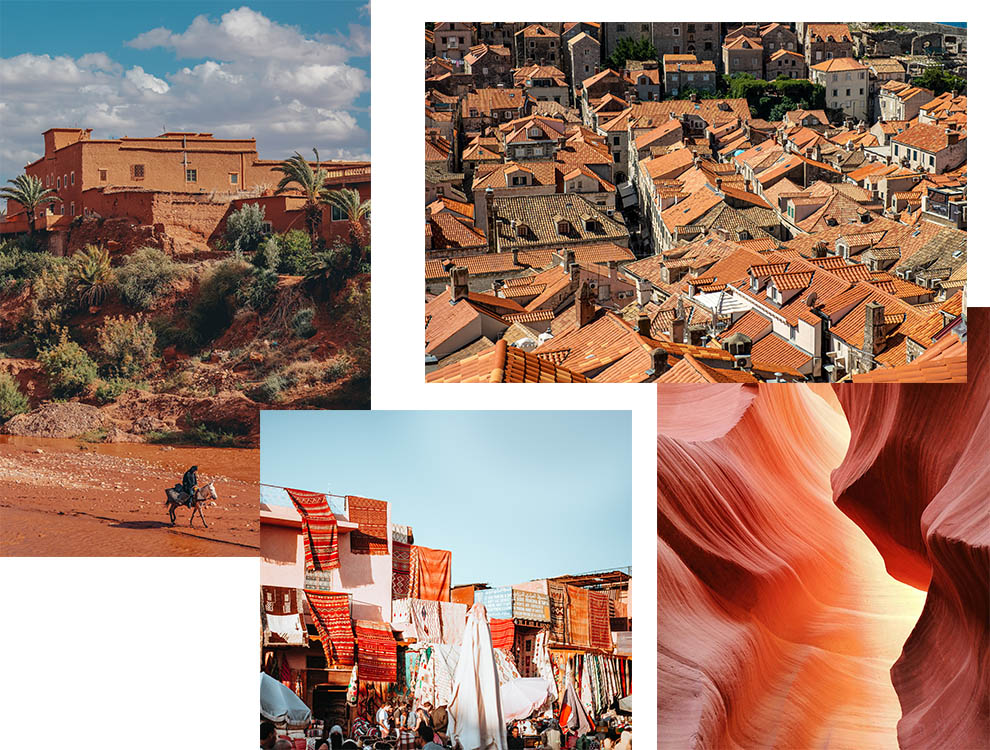 Antelope Canyon, Arizona…This natural wonder of orange-hued swirling sandstone is the product of millions of years of water erosion. The magnificent slot canyon lies just east of Page in Northern Arizona, with canyon walls climbing 120 feet above the stream bed.

Morocco…A multi-coloured mish-mash of markets, mosques, and riads, the Moroccan palette is beautifully diverse. Though it is the sweeping sand dunes throughout this desert land which wrap the sun-soaked kasbahs in an orange glow, from soft apricot sunrises to fiery sunsets.

Dubrovnik, Croatia…The distinctive terracotta rooftops of Dubrovnik’s UNESCO-listed Old Town are best viewed from its impressive city walls, which encircle the many Gothic, Renaissance and Baroque architectural gems below.

The happiest of all colours, from citrus and saffron to sandy beaches and sunshine. 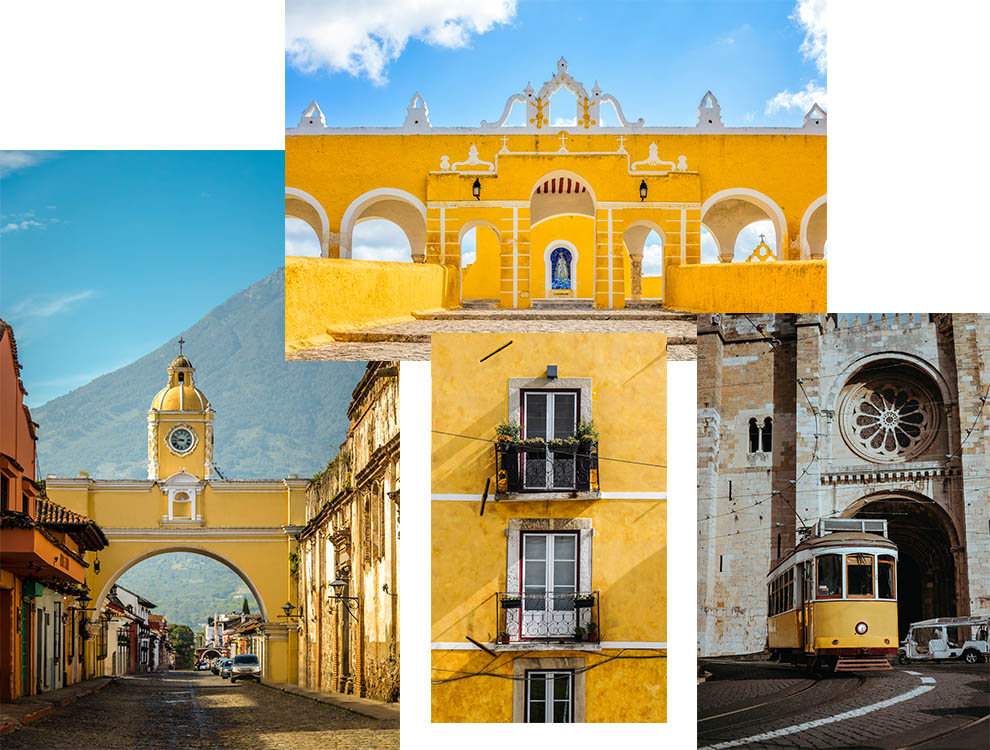 Antigua, Guatemala…The canary yellow Arch of Santa Catalina is one of Antigua’s most recognisable landmarks, standing tall above a colourful cobbled street and framing Agua Volcano which dramatically rises in the background.

The Yucatán, Mexico…Home to Izamal, Mexico’s ‘Yellow City’, where rows upon rows of buildings are painted in egg yolk yellow – this sacred site was originally a place of pilgrimage for the Mayans to honour their sun god.

Lisbon, Portugal…The most authentic way to soak up the atmosphere of Portugal’s capital is by hopping aboard one of the historic Remodelado trams, the quaint yellow shuttles which rattle and screech through the city’s narrow streets.

These green and pleasant lands are filled with verdant vineyards, luscious jungles, flourishing forests and more. 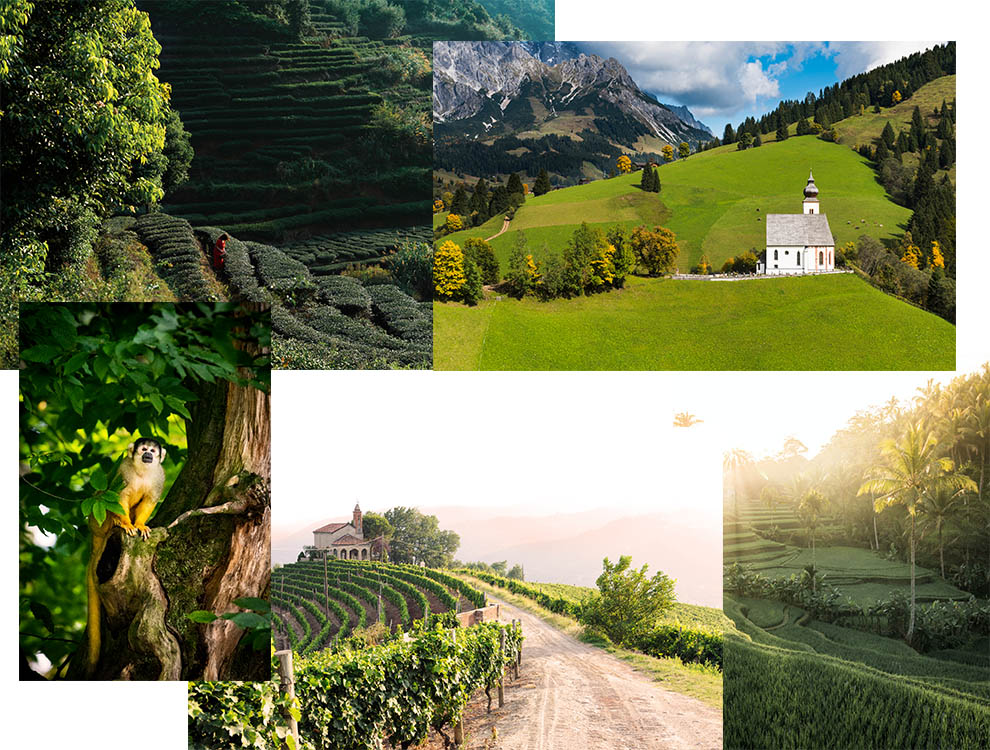 Anxi, China…Just like the perfect cup of Tieguanyin, a luxury break in Anxi is best enjoyed slowly. Here, the landscape is a deep-green patchwork of terraced tea plantations, winding up into the hills.

Bali, Indonesia…Venture into rural Bali and you’ll find an emerald world of palm trees, rice fields and terraces like the green carpeted tiers of Tegalalang just north of Ubud.

Tuscany, Italy…Savour the quiet life at a country retreat among rolling hills lined with cypress trees, vineyards and olive groves, and sample Tuscan delicacies and some of Italy’s finest wines.

Costa Rica…Costa Rica is the definitive tropical paradise – a small country that’s bursting with wildlife, from the rainforests of the Arenal Volcano National Park and Manuel Antonio to the tangled mangrove trees at Ojochal de Osa.

Austria…The hills really do come alive in the Austrian Alps during summer, a grassy green scene of mountainside meadows overflowing with wild flowers, and pasturelands as far as the eye can see.

The soothing shade of the sea, these destinations are awash with the most calming colour of all. For more things bright and blue-tiful, drift away here. 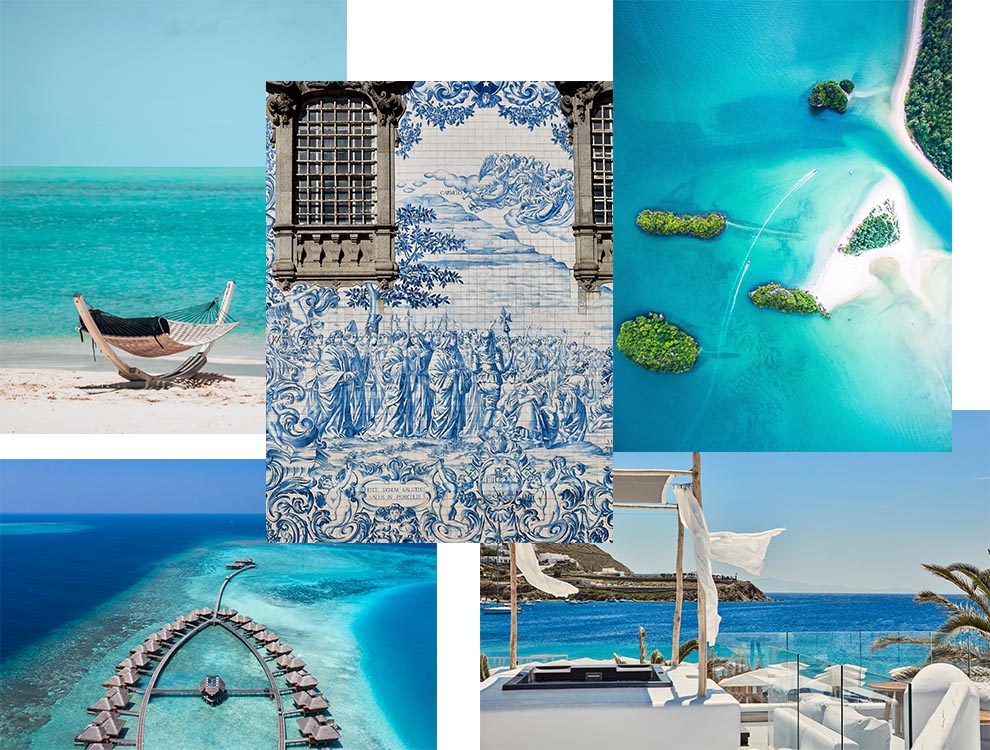 Thailand…Boasting some of the brightest blue waters in the world, Thailand’s surrounding islands lap up their reputation for coconut sipping, hammock swinging, and palm swaying in rustic beach bungalows or hopping from one traditional long-tail boat to the next.

Maldives…For this archipelago nation made up of more water than land, the Maldives is home to some of the purest blue waters in the world – thanks to the tropical temperatures of the Indian Ocean, and the reflection of blue and green light which is absorbed by phytoplankton on its coral reefs.

Mykonos, Greece…Virtually synonymous with the colours of its national flag, Greece is home to whitewashed walls, cerulean blue cupolas, and postcard-worthy waters. Since its days as a quaint fishing village, the windmills of Mykonos boast some of the Aegean’s bluest views.

Porto, Portugal…Follow the trail of azulejo blue tiles around Porto, including the Capela das Almas – the city’s most photographed building – read more about this ancient artform from an authentic tile-making atelier here. 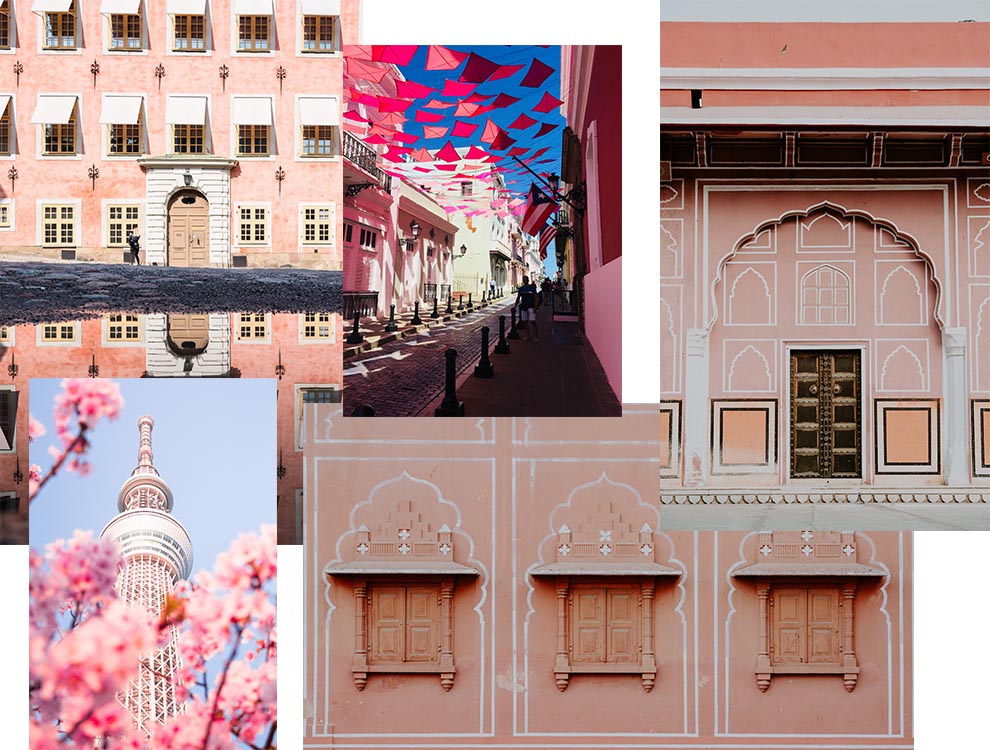 Jaipur, India…Known as the Pink City of India, Jaipur was originally painted in the colour symbolising hospitality by Maharaja Ram Singh to welcome his royal guest – Queen Victoria’s son, Albert Edward, Prince of Wales. A law was soon passed to maintain the pink colour for any future buildings in the city, which is why you’ll find almost every façade is still peachy today.

Tokyo, Japan…From late March to early April each year, Tokyo is bursting with cherry blossom. During sakura season, thousands of trees come into bloom – read our full guide to this magical time here.

San Juan, Puerto Rico…The colourful, cobblestoned streets of Old San Juan are lined by colonial churches and historic buildings, but there is one spot in particular that is eye-catchingly beautiful. Fortaleza Street was recently home to an aerial art installation of vibrant umbrellas, which has since been replaced with bubblegum coloured kites.

Stockholm, Sweden…Stockholm’s old town island of Gamla Stan is a maze of centuries-old buildings in warm colours, but it’s the dusky pink palace of Riddarhuset that steals the show. 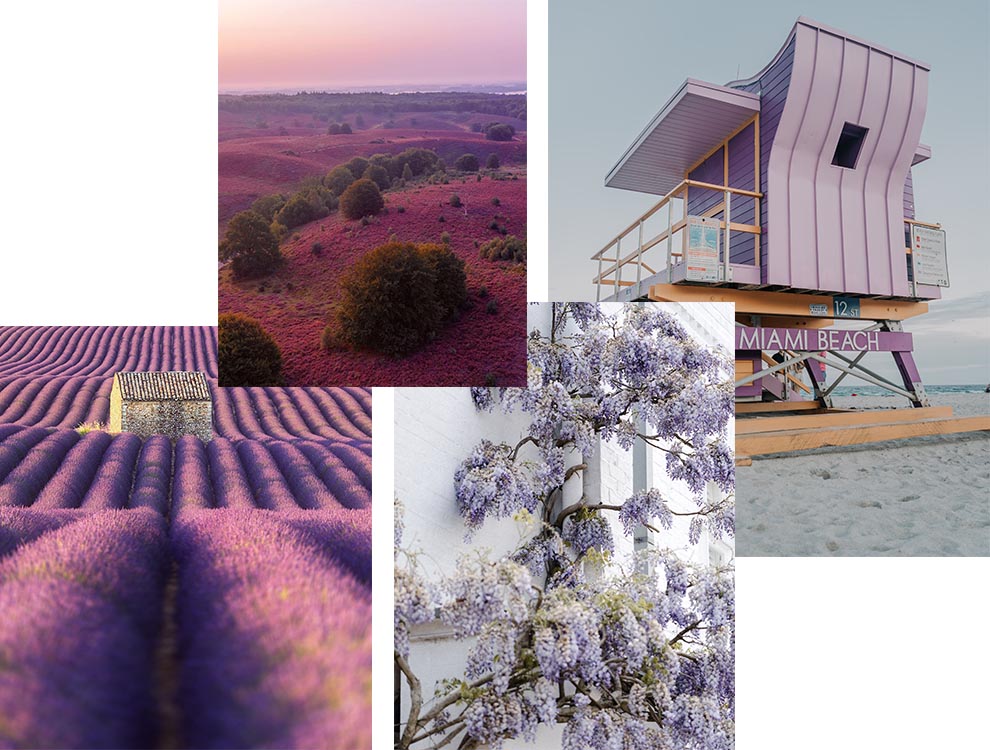 Top left image: ‘Purple Haze in the Netherlands’ by @boyanoo

Provence, France...A rolling landscape of scented lavender fields, olive groves, and pine forests, with a smattering of honey-hued villages and cobblestone streets, Provence is prettiest in its purple-tinged lavender season from mid-June to mid-July. For a classic postcard shot, head to Notre-Dame de Senanque, a 12th-century abbey overlooking one of France’s most famous fields.

London, England…Wisteria hunting in the capital has become somewhat of a summer sport for photographers. Some of our favourite spots include Notting Hill, Chelsea’s petite Cheyne Walk, and the lilac tunnel pergola at Peckham Rye Park.

Miami Beach, USA…Miami Beach may be best known for its Art Deco architecture along the likes of Ocean Drive, but its quirky lifeguard towers strung along the golden sand are also amongst some of the city’s most recognisable icons.

The Netherlands…Fields of tulips might come to mind first, but the Netherlands are also blooming with grape hyacinths in the springtime. Lisse’s Keukenhof Park in southern Holland is one of the largest flower gardens in the world, where you can see these bulbous beauties up close.