The Wilderness Edition: 10 remote destinations to get away from it all

Escaping everything and everyone might be high on your post-lockdown list after spending many months indoors this year. Breaths of fresh air have been limited, and the freedom of travel restricted. If it’s all beginning to feel too close to home, here are ten far-flung corners of the world to go off-grid and off-the-beaten-track once this is all over – social distancing guaranteed.

A dramatic landscape of black volcanic beaches, ethereal blue lagoons, lunar-like glaciers, spellbinding waterfalls, bubbling springs and lava fields, Iceland is an other-worldly escape for back-to-nature seeking travellers. While the natural beauty of this Nordic island can be experienced all year round, it feels that bit more magical during the winter – when the fjords are frozen, the rustic cabins dusted with snow, and the Northern Lights come out to play. 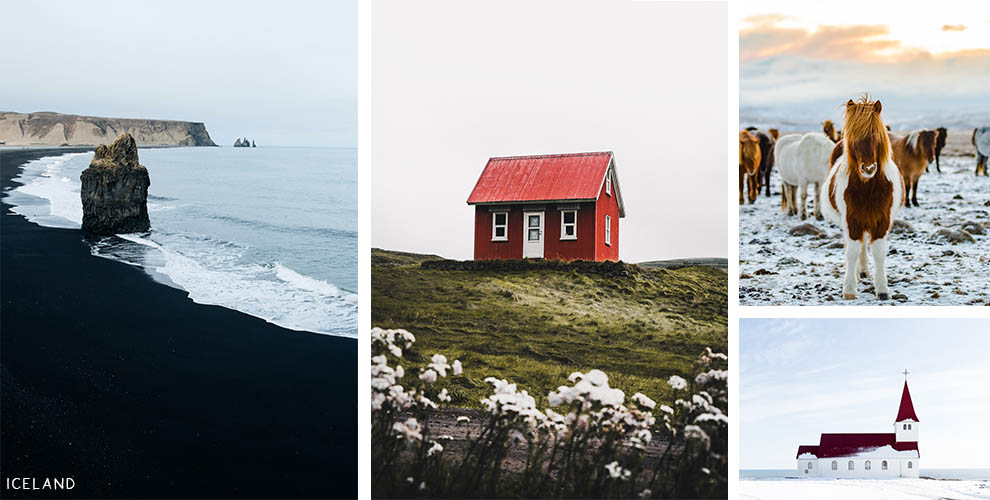 From heater-dotted coastlines, hilltop castles and stone-clad villages to craggy peaks and mystical lochs, Scotland is home to some of the most ruggedly beautiful scenery in the world. There is no place quite like the Highlands for completely disconnecting from daily life, where red deer roam the valleys of Glencoe and dolphins swim in the Moray Firth – all with the spectacular backdrop of the UK‘s highest peak, Ben Nevis. 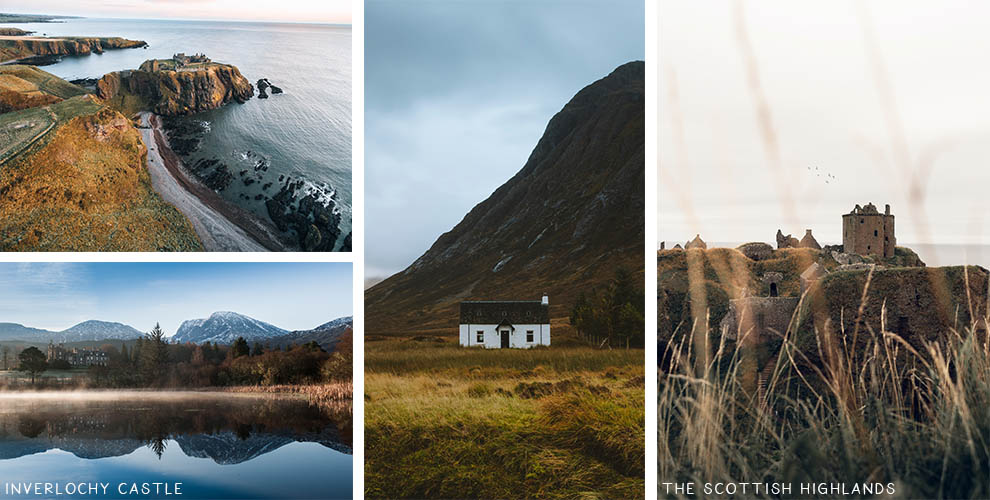 Inverlochy Castle, Fort William…From the dove-grey stone walls and romantic turrets, through to the sumptuously furnished rooms, this Scottish masterpiece of 19th-century baronial splendour is located in a postcard-worthy setting three miles from Fort William. Make the most of the Nevis Range during winter with the snow sports at nearby Aonach Mor.

There’s going off-the-beaten-track, and then there’s Mongolia. Sweeping grassy steppes are home to herds of native horses, which outnumber the country’s human population of largely nomadic caravans. With the Gobi Desert to the south, and the Altai Mountains to the north-west, Ulaanbaatar sits between some of the world’s most extreme terrains – and ranks as one of the coldest capital cities. 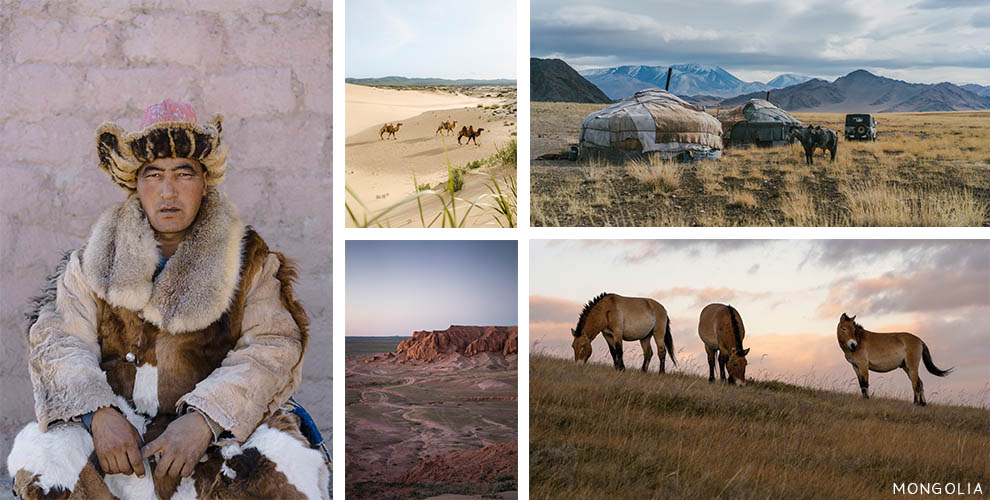 Terelj Hotel, Ulaanbaatar…Set on the banks of Terelj River in a remote spot surrounded by wild, tree-covered mountains in the Gorkhi-Terelj National Park, this elegant outpost is huddled amongst some of the most carefully protected parkland in the country. The great outdoors is right on your doorstep, from bird watching to horseback riding through meadows of edelweiss.

Nestled in the middle of Swedish Lapland, Harads takes you to the Arctic heart of the wilderness. Here, trees heavy with snow are silhouetted against the Northern Lights and traditional red lodges line the Lule River. Home to snow-topped mountains, seemingly endless forests and fast flowing rivers, National Parks cover much of Swedish Lapland. Canoe through birch lined rivers to spot beavers, moose and even wild reindeer in their natural habitats. 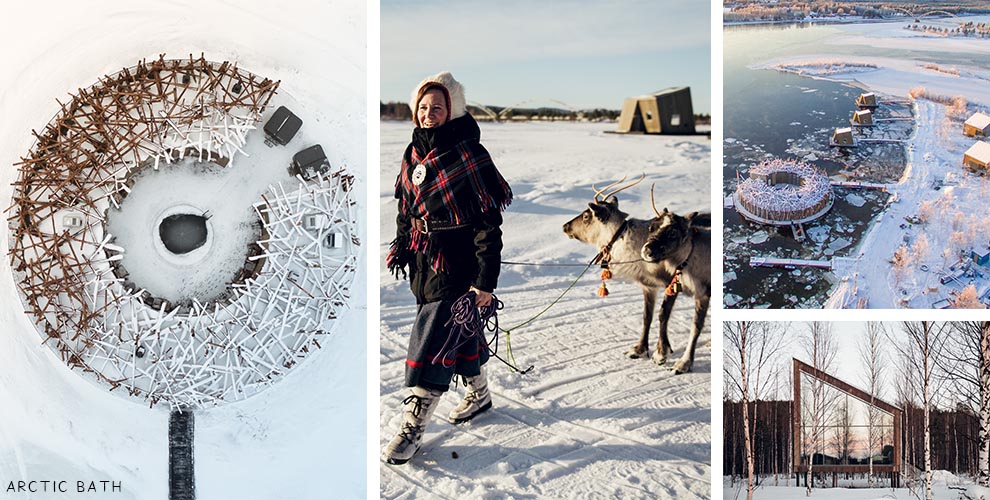 Arctic Bath, Harads…Glass walls, floating walkways and sky-gazing decks connect the inside with the great outdoors at this one-of-a-kind resort, where cosy cabins seem to hover above both land and water. Wildlife enthusiasts can join a Sámi reindeer herder at an Arctic circle camp, canoe alongside beavers, embark on a moose safari, photograph golden eagles or go bear spotting.

With panoramic scenery stretching as far as the eye can see, it’s no wonder New Zealand has become the dream destination of many a film director. You’ll find the south island a little cooler than the north, and it tends to have more defined seasons, all equally picture-perfect. There is no shortage of ways to explore the unspoiled landscape of snow-capped mountains, fern covered forests and rolling valleys – from whale watching, bungee jumping, and helicopter rides over glaciers, to skiing and snowboarding some of the world’s best powder snow in the winter. 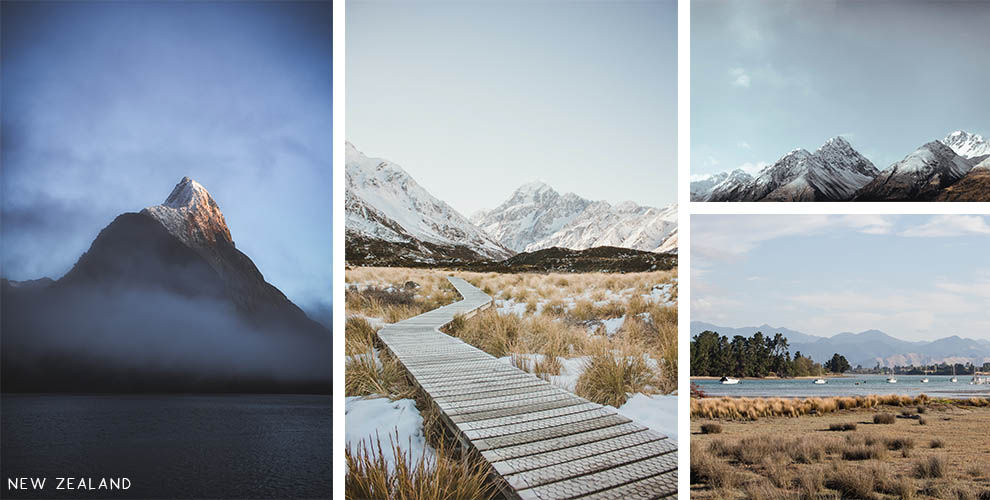 Bay of Many Coves, Queen Charlotte Sound…Set in a tranquil cove with beautiful views of the Marlborough Sounds, this exclusive retreat is surrounded by an eco-marine haven, way off the beaten track. You will soon understand why Captain Cook chose this area as his favoured anchorage while visiting New Zealand.

Boasting the world’s longest coastline, with the Atlantic to the East, the Pacific to the West, and the Arctic Ocean stretching along the North, Canada‘s geography is as varied as its spectacular seasons. Everything about this vast country is big: the Niagara Falls, the surf swells, the famous moose and infamous grizzly bears. Get lost in the wilderness of backcountry skiing in British Columbia, polar bear spotting on the northern tundra, whale watching on the picturesque waterfront of Vancouver Island, and canoeing along auburn tree-lined waterways in Nova Scotia. 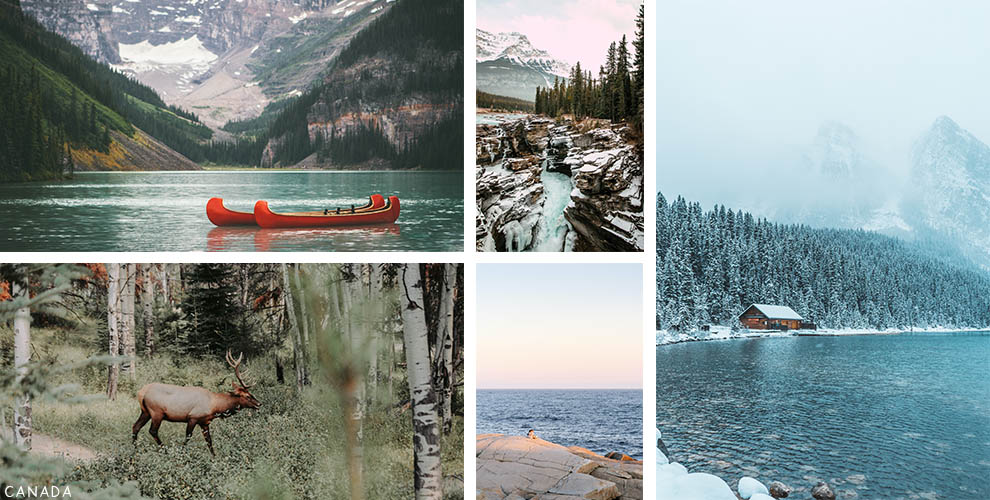 Trout Point Lodge, Nova Scotia…A secluded nature sanctuary on the banks of the Tusket River and next to the Tobeatic Wilderness Area, this luxury lodge is surrounded by swathes of forestland. Giving guests the perfect base to discover the backwoods, you are guaranteed to get up close with the local wildlife.

If you’re after luxury in one of its most remote, authentic settings, the last remaining Himalayan Kingdom won’t disappoint. A year-round destination for experiencing nature in its purest form, Bhutan is one of those special places which has to be seen to be believed – hilltop fortresses with fluttering prayer flags, ancient Buddhist monasteries, rhododendrons springing into full bloom, and sedges of endangered Black-Necked Cranes circling the Phobjikha Valley each winter. 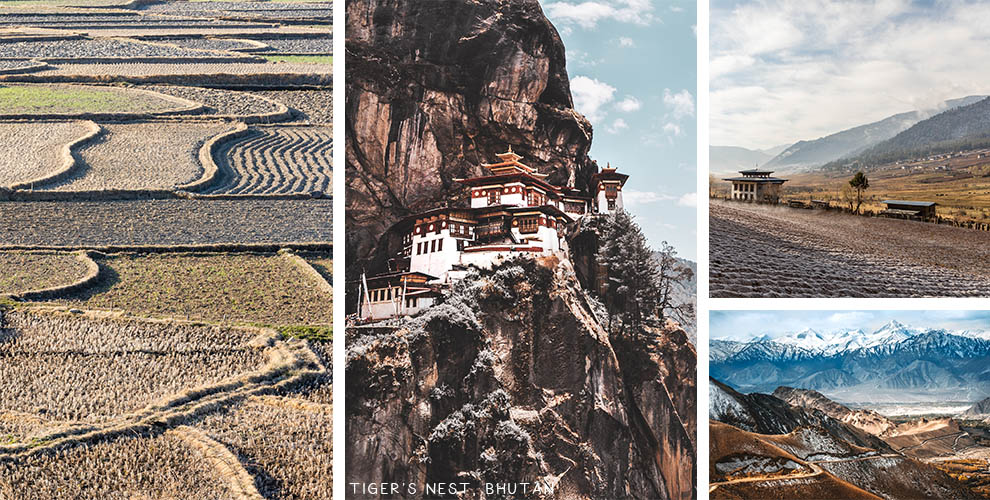 Gangtey Lodge, Phobjikha Valley…A world away from the everyday, this all-suite Himalayan hideaway immerses guests in traditional Bhutanese culture, offering an array of authentic experiences including Buddhist meditation classes, archery, and hot stone baths back at the farmhouse.

Bhutan Spirit Sanctuary, Paro…Inspired by traditional dzong architecture, this high-altitude retreat is perched amongst the clouds in Neyphu Valley, against a backdrop of rugged cliffs and pine trees. As the first and only traditional spa-inclusive resort in Bhutan, guests of the Sanctuary can enjoy a bespoke programme of treatments in the hands of the in-house medicine doctors.

Arriving in Colorado feels a little like setting foot in the Wild West – with copper-red canyons and characterful ranches. Home to the Rocky Mountains, high plains, and desert lands, this scenic state enjoys 300 days of sunshine each year whilst also welcoming snow-seekers to world-renowned ski resorts almost all year round. Its great outdoors are made to be explored, whether on foot, skis, or horseback. 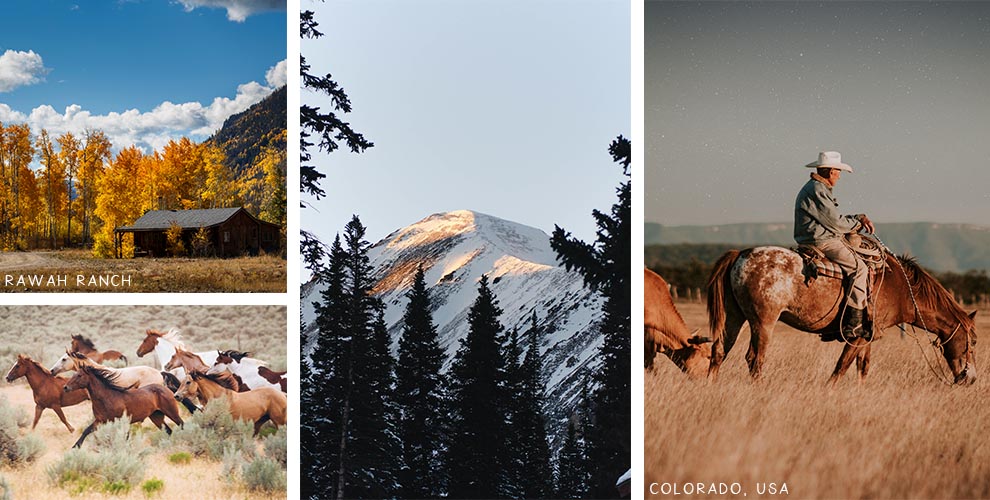 Rawah Ranch, Glendevey…This self-styled ‘dude’ ranch and fly-fishing lodge is straight out of a Western movie – historic Colorado-style cabins in the wild Laramie River Valley. Channel your inner cowboy and ride through thousands of acres of pristine and protected high-country Colorado wilderness.

One of Europe’s best-kept secrets, Lithuania has something of a fairytale feel about it – with tranquil lakes, soaring mountains, and enchanting castles. The countryside is at its most colourful in spring and autumn, but once the snow sets in, the landscape is transformed into a winter wonderland. The five lakes around the small city of Trakai are home to a vast array of wildlife, while its woodlands are designated as a Historical National Park – the only one of its kind in Europe. 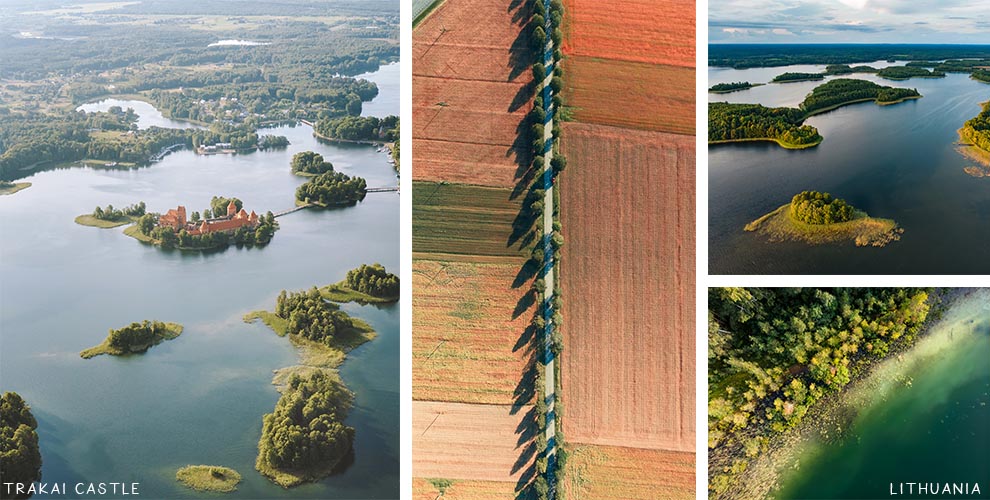 Esperanza Resort & SPA, Vilnius…Surrounded by 14 hectares of expansive forests and set beside a beautiful lake, this eco-friendly resort allows guests to make the most of its pristine setting. Spend summer days on forest walks or messing about on the lake. In the winter, snowmobiling, cross-country skiing and ice fishing are just a few of the available activities.

Discover ends-of-the-earth luxury in the wilds of Patagonian Argentina, with its wide steppes, grasslands, and dramatic desert scenery where cougars, guanacos, and flamingos roam free. Nature lovers won’t be left wanting in Villa La Angostura, a secluded spot in the beautiful Argentinian Lake District with the snow-dusted Andes in the background. Home to the Los Arrayanes National Park and its extraordinary rare rust-brown coihues and ñires – rumour has it that these trees inspired the imaginary forest in Walt Disney’s Bambi. 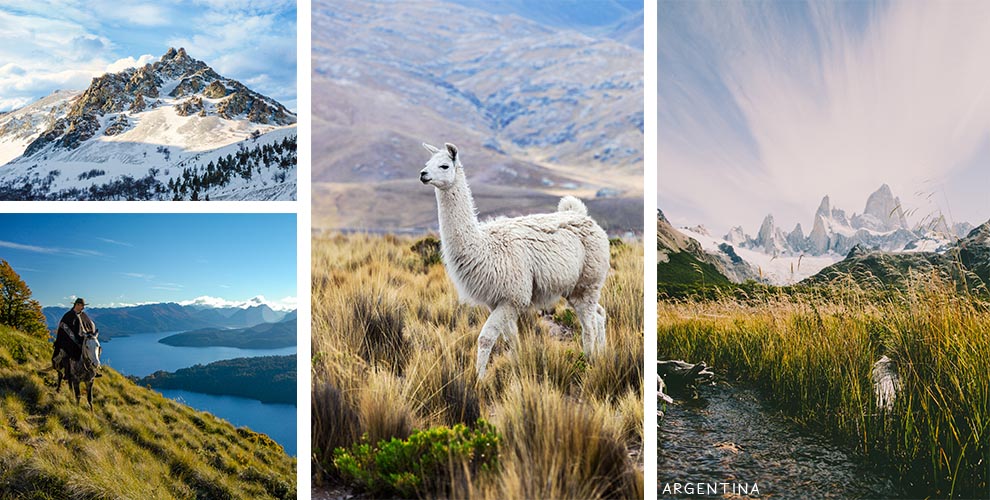 Correntoso Lake & River Hotel, Villa La Angostura…Nestled in the shadows of the Andes, this lakeside beauty has a spectacular setting on the shores of Lake Nahuel Huapi. Here, nature meets nurture with rooms that have the most exhilarating lake and mountain views, and guests are perfectly placed for snow, forest and water escapades.