10 of the best afternoon teas in the UK

Is there a more quintessentially British way to spend an afternoon? Whilst we’re not here to settle the cream-or-jam-first debate, there’s no arguing with these utterly fabulous afternoon teas served at some of the UK’s finest country house hotels and boutique city boltholes. Save this scrumptious selection for some post-lockdown indulgence, or spoil someone special with a tea time tête-à-tête to look forward to with an SLH e-Gift Card. 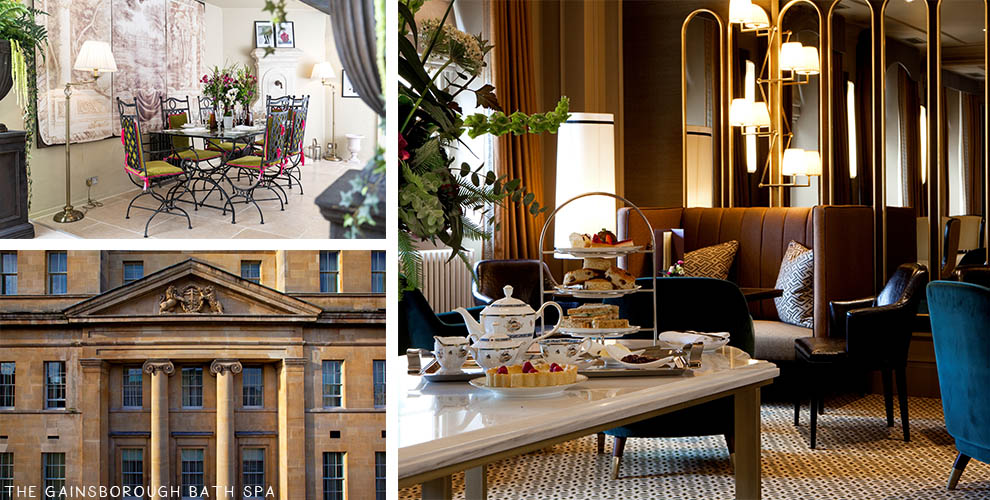 Let your period drama fantasies run riot at The Gainsborough Bath Spa, an elegant Georgian heritage hotel housed within two Grade II Listed buildings with a grand façade and colonnades straight from the 1800s. If Lady Whistledown’s Bridgerton society papers have inspired you to take a turn about the Royal Crescent, or a dip into Roman Britain at the Baths and Pump Room, then settle down in the vintage-inspired Canvas Room back at The Gainsborough for a delectable afternoon tea – expect airy scones, alongside picture-perfect pâtisserie and loose leaf tea blends – or champagne, for dialling up the decadence. Our verdict? It’s Duke of Hastings spoon-licking good… 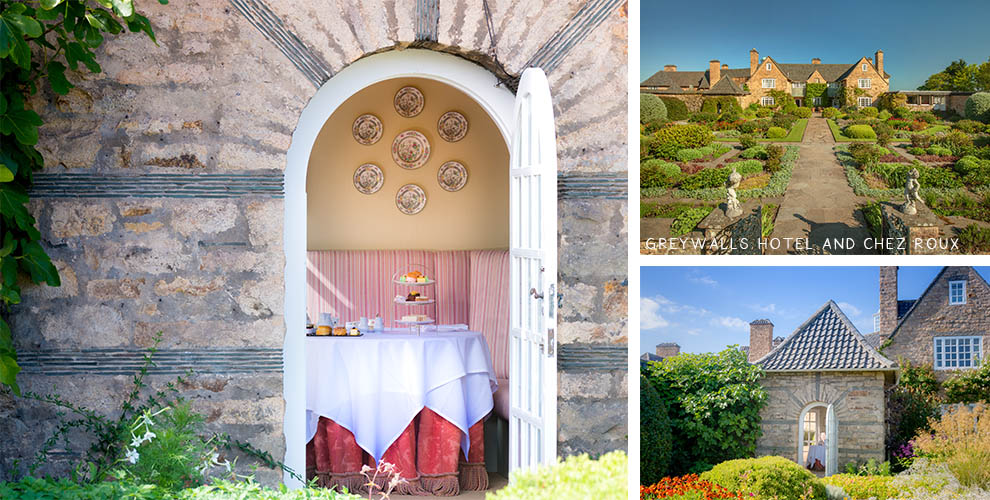 With Michelin-starred chef Albert Roux’s name on the in-house restaurant, Greywalls Hotel and Chez Roux serves up only the finest ingredients on its seasonal menu. Tucked away within the walled gardens of this Edwardian country house, afternoon tea here is a charming affair in the new Summer House Tea Room – a private and secluded space which seats up to six guests. Select your choice of tea leaves from the hotel’s very own tea menu before feasting on the chef’s artisan finger sandwiches, freshly made scones (complete with Albert Roux’s jam and clotted cream) and an assiette of sweet delicatessens. 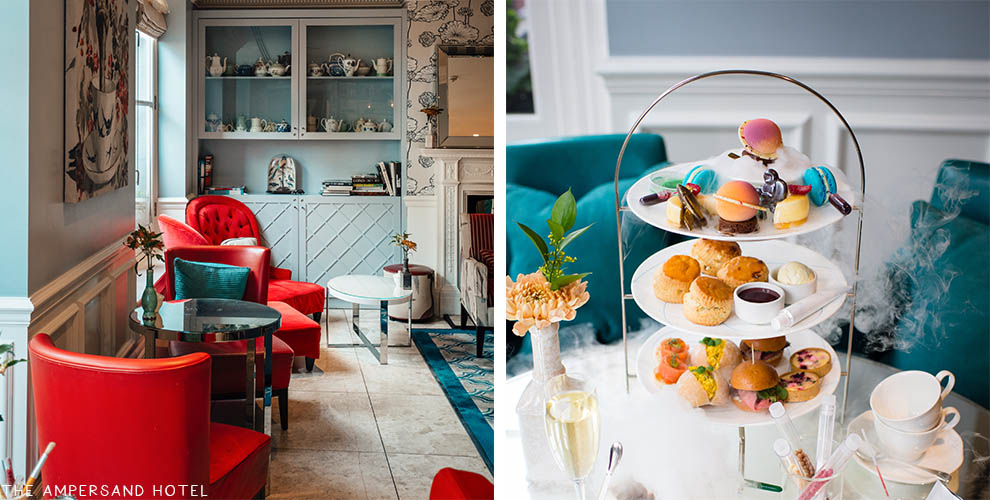 There’s more than a hint of Victorian whimsy about The Ampersand Hotel, a grand boutique with a few surprises up its sleeve. Filled with vintage curiosities and oozing contemporary elegance, it takes its design cues from London’s most famous museums – including its South Kensington neighbour, the Science Museum, for its out-of-this-world afternoon tea. Physics, chemistry and gastronomy meet in a curious alchemy of dishes, from jams served in petri dishes, to chocolate spacemen and dinosaur biscuits, all served in a delightful English drawing room. 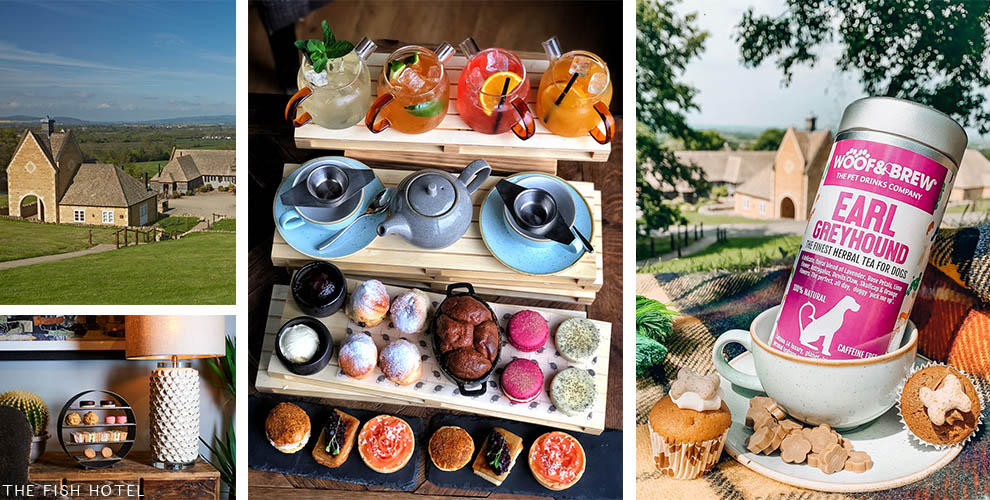 This village-style collection of houses, huts and hideaways set within 400 acres of rolling Cotswolds countryside turns tradition on its head. Tipsy Tea at The Fish Hotel is a playful take on quite possibly the most British of all institutions, and above all is just jolly good fun. Start by sampling one of the house blended Hoogly tea infused cocktails, including white tea infused prosecco, marzipan mule and chocolate brownie with a slug of rum. Pair your cocktail with a selection of tasty teatime treats such as a crab, prawn and Crème Fraîche puff, and Welsh Rarebit with beetroot chutney before topping it all off with something sweet – think pineapple tipsy cake and scones with lashings of clotted cream and strawberry jam. Ever the accommodating hosts, four-legged friends can swap cucumber sandwiches for a dog-friendly afternoon tea, featuring canine tit-bits from Woof & Brew, The Barking Bakery and Cotswold Raw.

Tipsy Tea and Doggy Afternoon Tea will be making a comeback from Thursday 20th May 2021 and will be served all week from 2pm – 4:30pm. 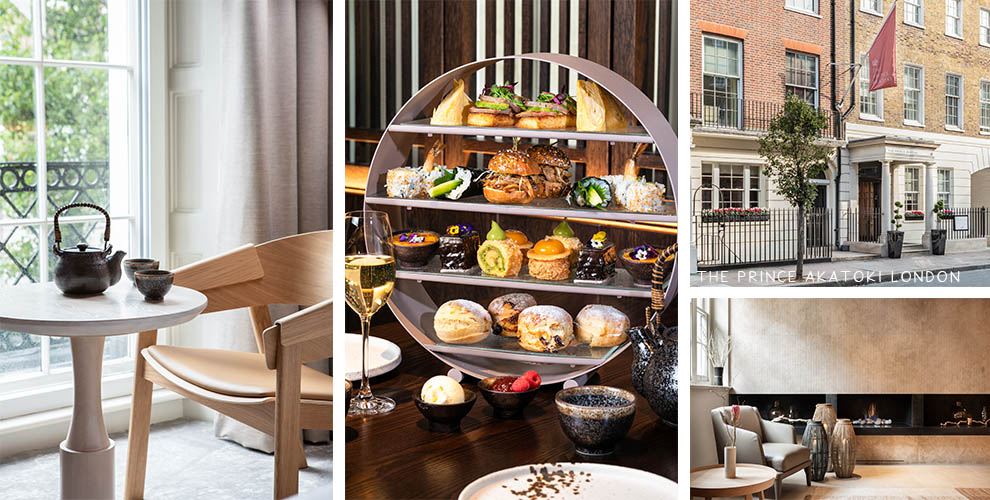 East meets West End London in this Japanese-inspired boutique, where you can say sayõnara to any traditional sense of afternoon tea. Instead, TOKii Restaurant at The Prince Akatoki fuses authentic Japanese flavours with homegrown produce from suppliers around London, resulting in an afternoon tea with an oriental and original twist. Scones appear alongside the likes of chicken teriyaki buns, prawn tempura rolls, and tamagoyaki, which can be experienced in the elegant Malt Lounge & Bar on the ground floor of the hotel. 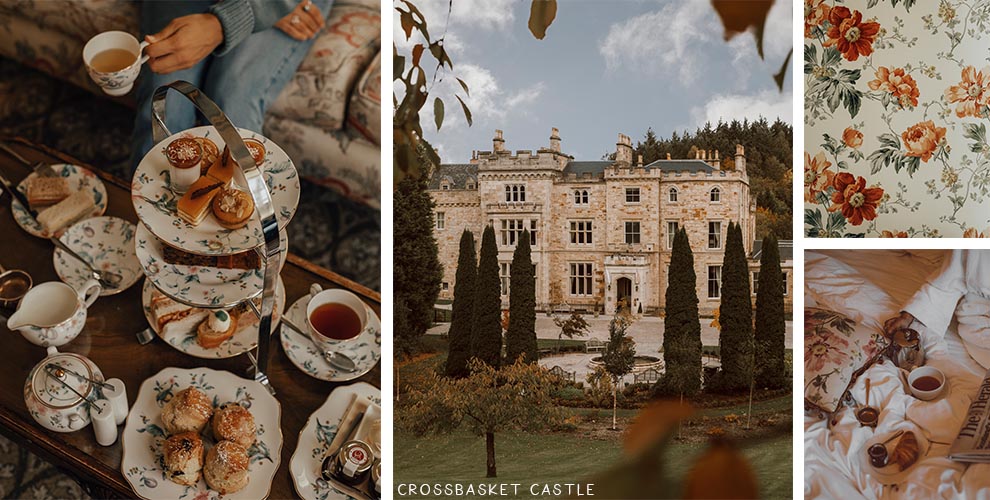 Well…who wouldn’t want to experience afternoon tea in a Scottish castle? The fairytale setting of soaring turrets, canopied beds, and antique-dotted suites at Crossbasket Castle provides the perfect backdrop for its enchanting afternoon tea, courtesy of the Roux family. Served on pretty porcelain plates, wash down freshly baked fruit scones with a glass of Albert Roux’s Blanc de Blanc Champagne, all the while overlooking the River Calder which runs through the estate. 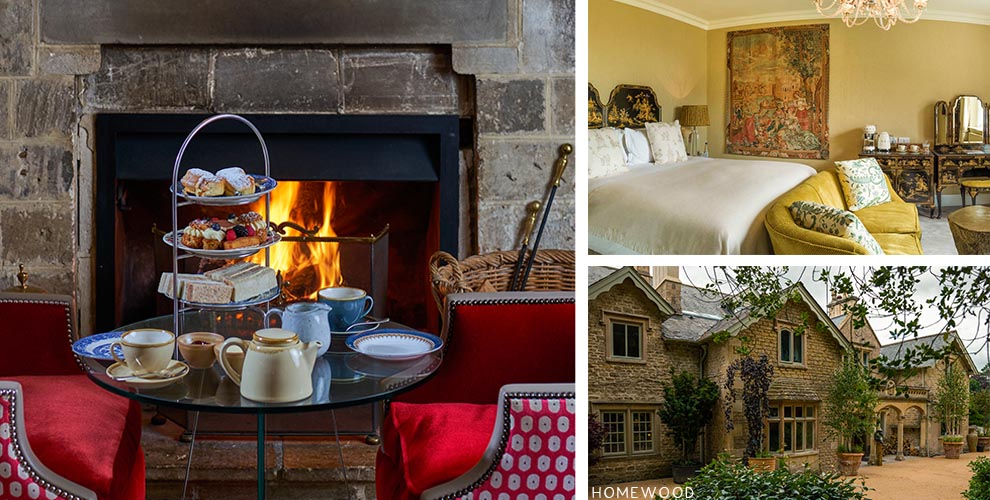 The rolling hills of Somerset form the glorious scenery to the eclectic, colourful, and luxurious Georgian country house that is Homewood, which elevates afternoon tea to an art form. Cosy up by the fire, or bask in the sunshine on the terrace to enjoy a lavish spread with seasonal treats and a glass of champagne. The delicate but indulgent array of gorgeous goodies includes slender sandwiches, dainty pastries and scones with world-famous West Country clotted cream and homemade jam. 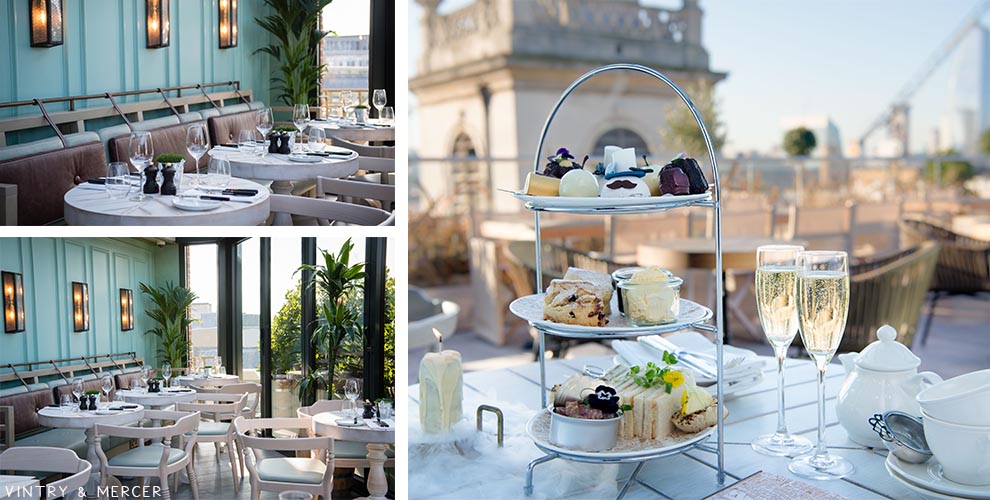 Immersed in the commerce and culture of the City of London – both past and present, Vintry & Mercer takes inspiration for its Guilds of the City Afternoon Tea from the historic trades, guilds and and merchants that once used to line the banks of the River Thames, as far back as 1394. Sip from a creative collection of ‘Tea Pot-Tails’ including the Cooper (a cocktail of Portobello gin, camomile and thyme, Knightor Vermouth, Mandarin saccharum) and nibble on themed pastries, from the Vintner (a dark chocolate barrel filled bourbon and orange Mercer) to the Mercer (a salted caramel mousse with passion fruit jelly and chocolate feuilletine). The Mercer Roof Terrace comes with sweeping views of London’s skyline, from the dome of St Paul’s Cathedral to the glass tip of The Shard. 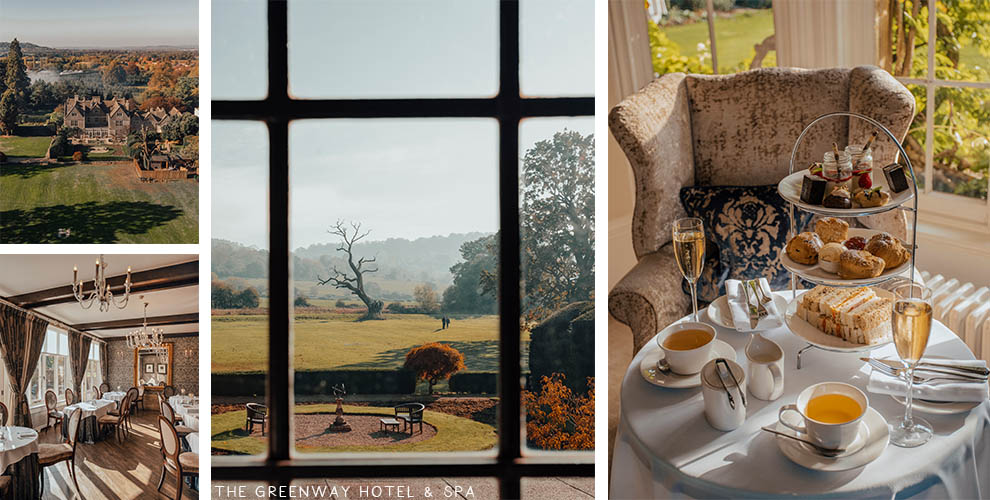 The Greenway Hotel & Spa is a charming honey-coloured stone, 16th-century Elizabethan manor house set in eight acres of manicured gardens. Guests can take their afternoon tea anywhere they like, from the Garden Room Restaurant which is bathed in natural light and boasts verdant views, to the tranquil terrace. From classic teas and infusions to specialty coffees, this Cheltenham tradition is as refined as the atmosphere is relaxed, served everyday between 2.30pm and 4.30pm. 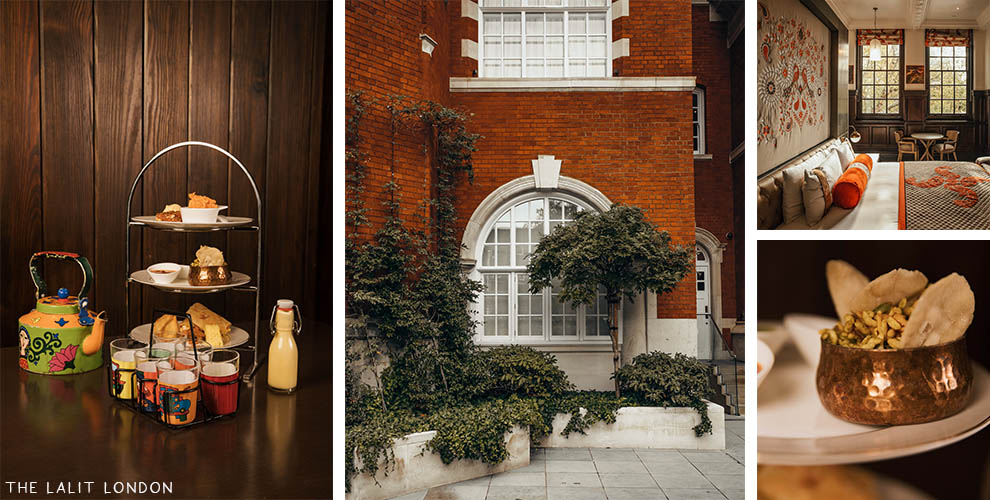 Taking up prime position on the Thames’ south bank, the stately red brick building of The LaLiT London is just a stone’s throw from the iconic Tower Bridge. Indian hospitality meets British tradition at Baluchi Restaurant, which dishes up a contemporary take on traditional regional Indian cuisine. Among the peacock blue heights of The Gallery, the table is set for an Eastern-inspired afternoon tea – begin ‘High Chai’ with delectable savouries like veggie or chicken kathi rolls, bombay bhel and a punjabi samosa, alongside a refreshing glass of Mango Lassi, followed by some traditional Indian sweets and a bespoke tea selection presented by a professional Tea Sommelier.