See the world on two wheels: boutique hotels with bicycles

The wind in your hair. The sun on your face. The childish delight of a downhill slope. Going on a bike ride is undoubtedly one of life’s simple pleasures, and one of the most accessible outdoor activities to enjoy on holiday. There is fun and freedom to be found behind handle-bars, but it is also a slow, more sustainable way to see the world for the eco-conscious traveller. Go off-the-beaten track and sightsee from the saddle with these boutique hotels which offer complimentary bicycles to guests. 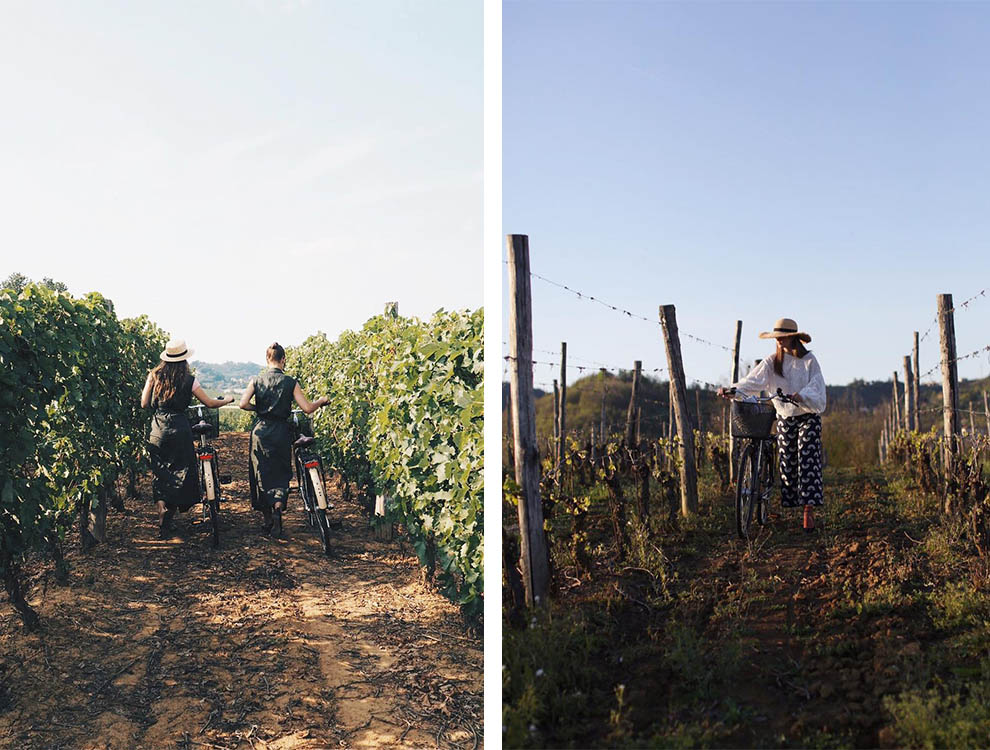 Verdant hills, vineyards, and terracotta roofs – Villa La Madonna sits within the blissful Bormida Valley in Piedmont, a timeless spot where life slows down. Take in the rolling scenery at your own pace with the villa’s bicycles, which come with a handy front basket to transport your freshly baked pastries for a dine-between-the-vines experience. 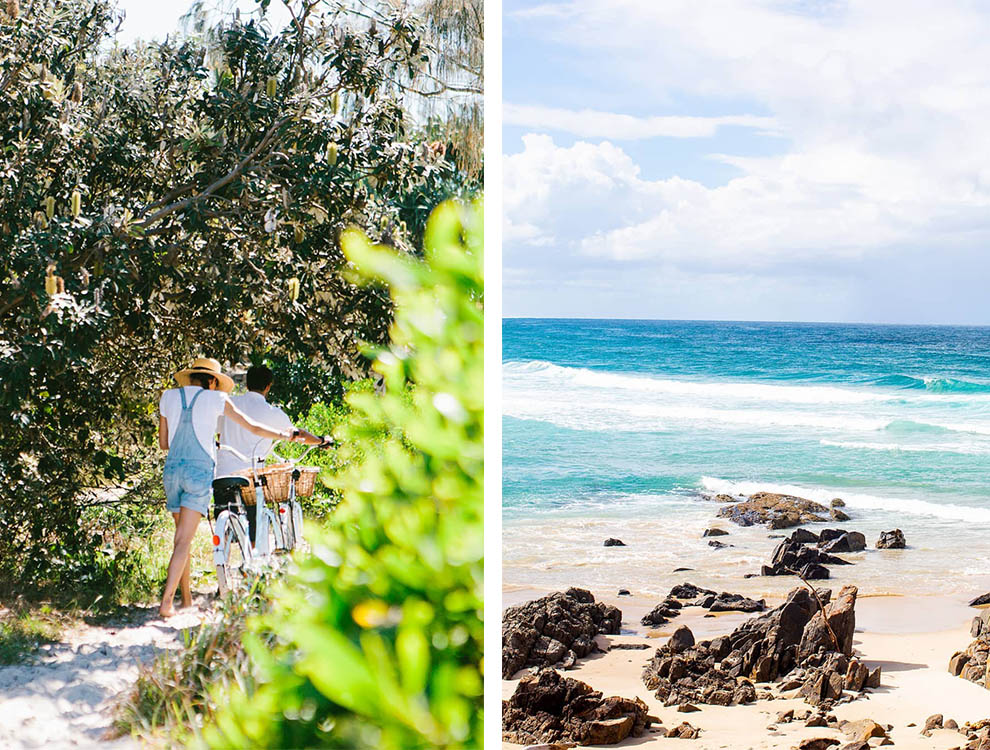 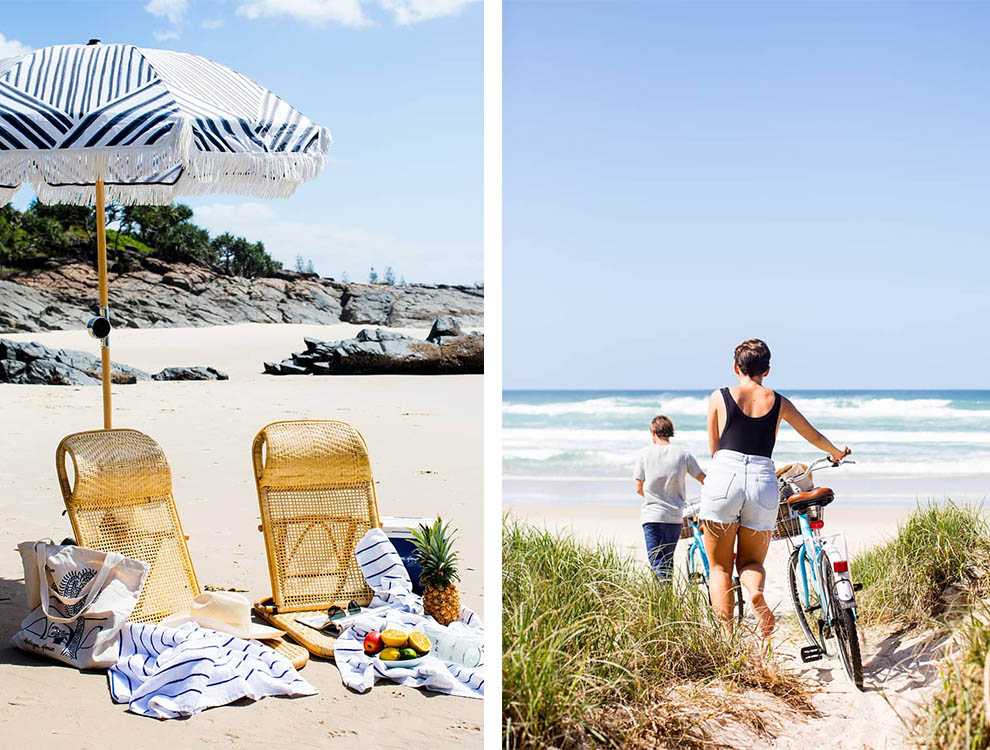 A classic surf spot which captures the feeling of endless summer, wake up to the sound of waves at Halcyon House. This effortlessly cool boutique is perfectly placed for cyclists to explore miles of sandy shoreline, with pretty coastal towns like Kingscliff just a peaceful pedal away. Don’t forget to pop a picnic in your basket for a seaside spread of dreams. 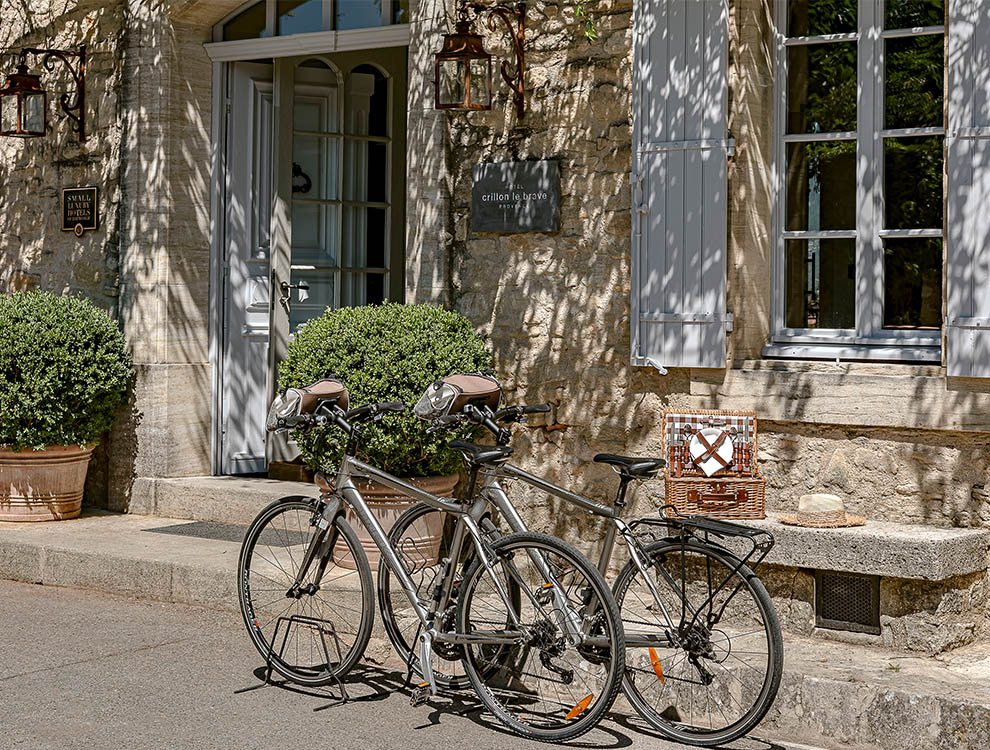 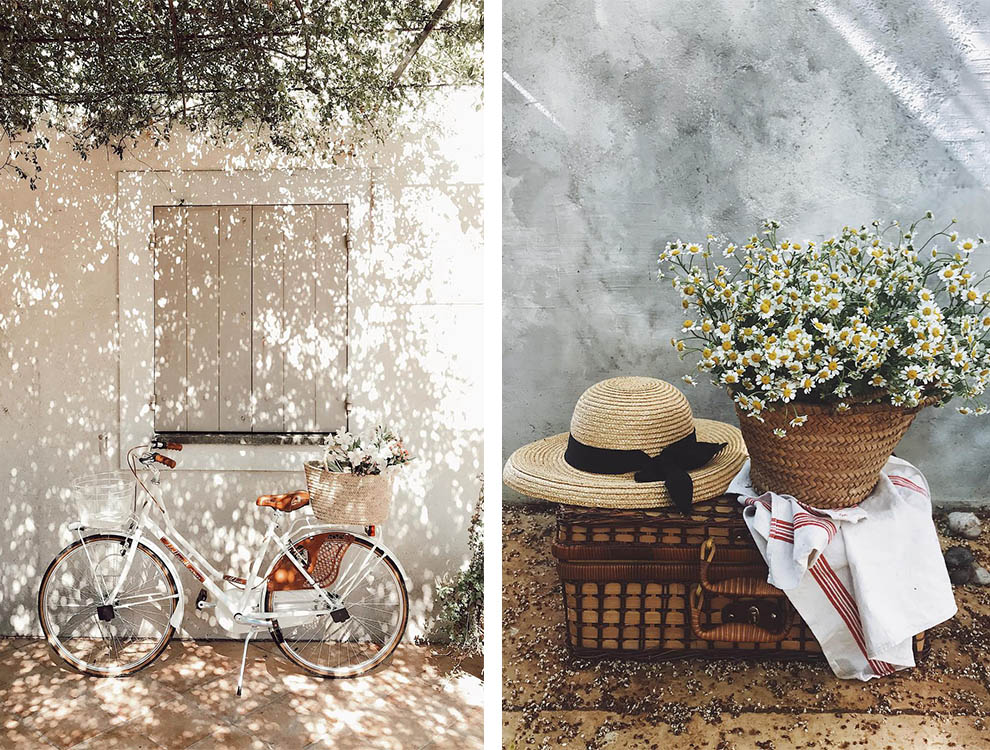 A rolling landscape of scented lavender fields, olive groves, and pine forests, with a smattering of honey-hued villages and cobblestone streets bathed in the beautiful light that has inspired generations of great artists. And if, like Van Gogh and Cezanne, you plan to head for the hills of Provence, the best way to do so is by bicycle. Thankfully, the hilltop hamlet-style Hôtel Crillon le Brave has bicycles and experienced guides on hand for you to discover the region like a local. Read more here. 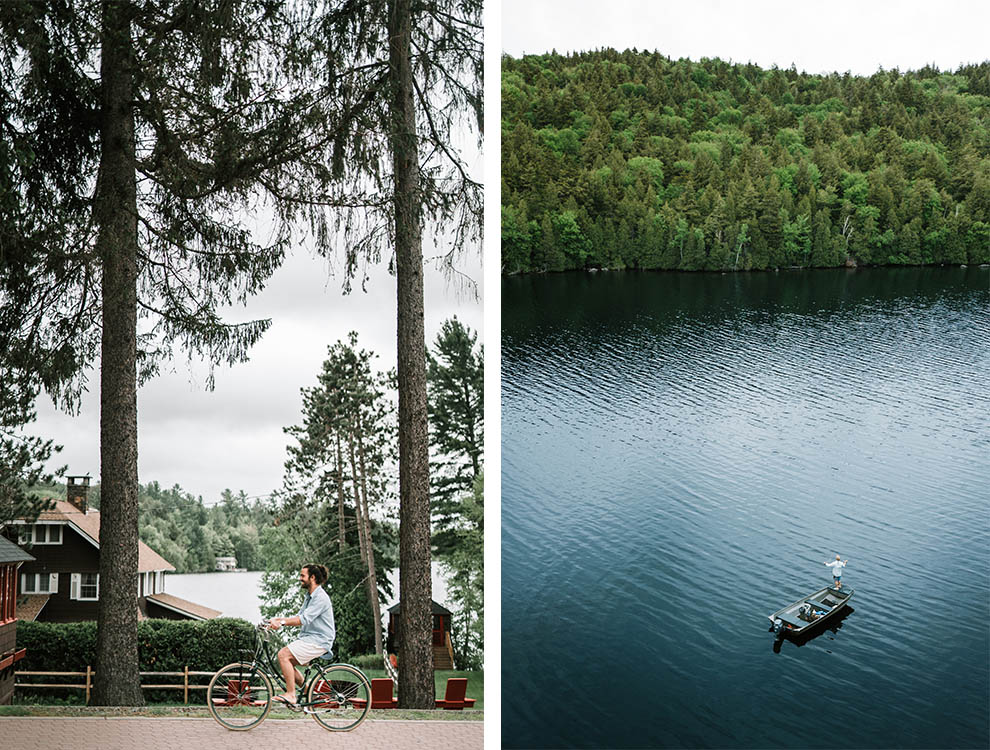 In a beautiful lakeside setting surrounded by the Adirondack Mountains, Mirror Lake Inn has unrivalled scenic views and sits within eight acres of landscaped gardens. Keen cyclists can explore over 100 miles of newly built mountain bike trails, and with trail heads as close as half a mile away, the inn makes an ideal base for your lakeside adventure. 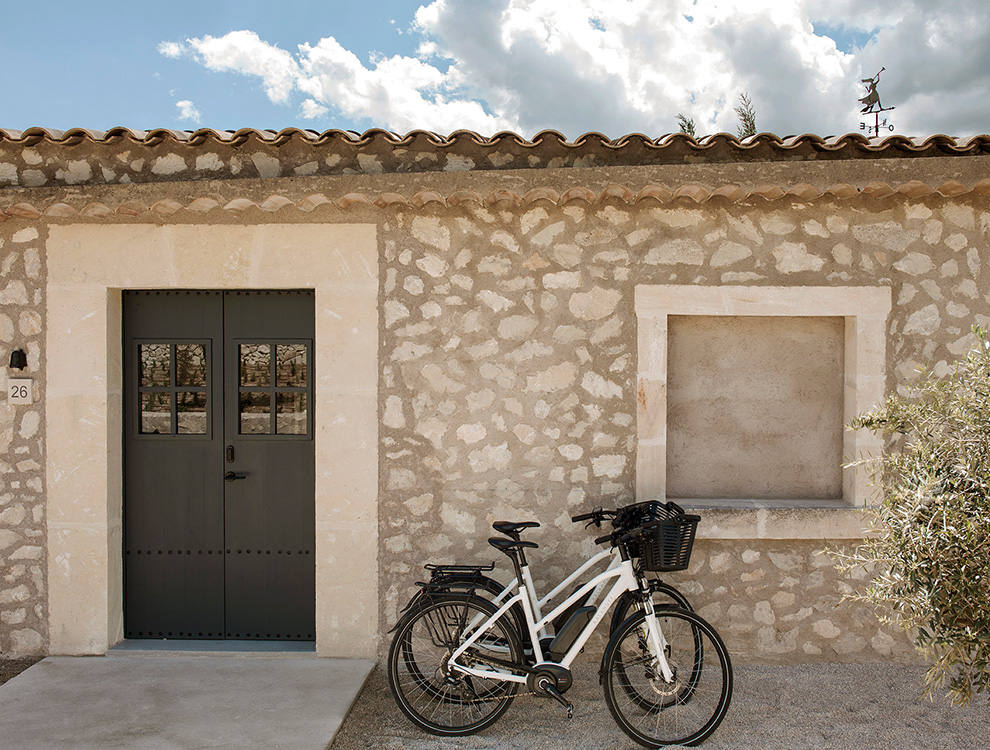 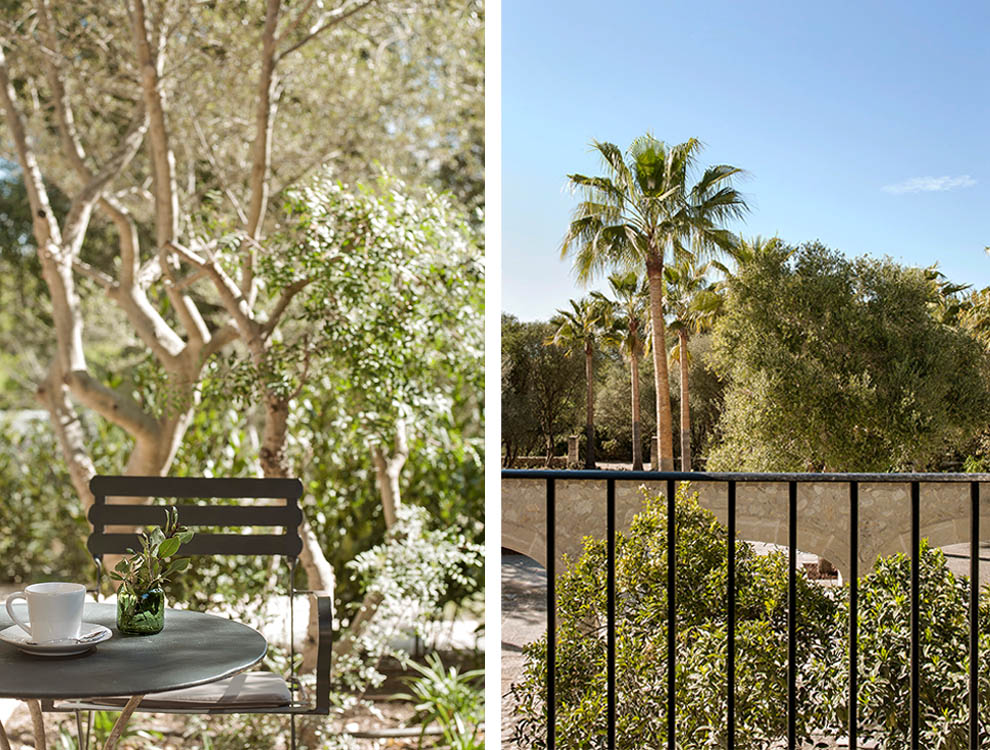 A rustic retreat in the heart of the Mallorcan countryside, Finca Serena is as idyllic as its name suggests. The delicate scent of olive trees greets you as you walk through the hotel grounds – past cypresses and lemon trees – with rippling hills and dramatic peaks as far as the eye can see. Hop on one of the hotel’s mountain or electric bikes and take the scenic route to nearby Montuïri, a traditional rural village surrounded by old stone windmills. 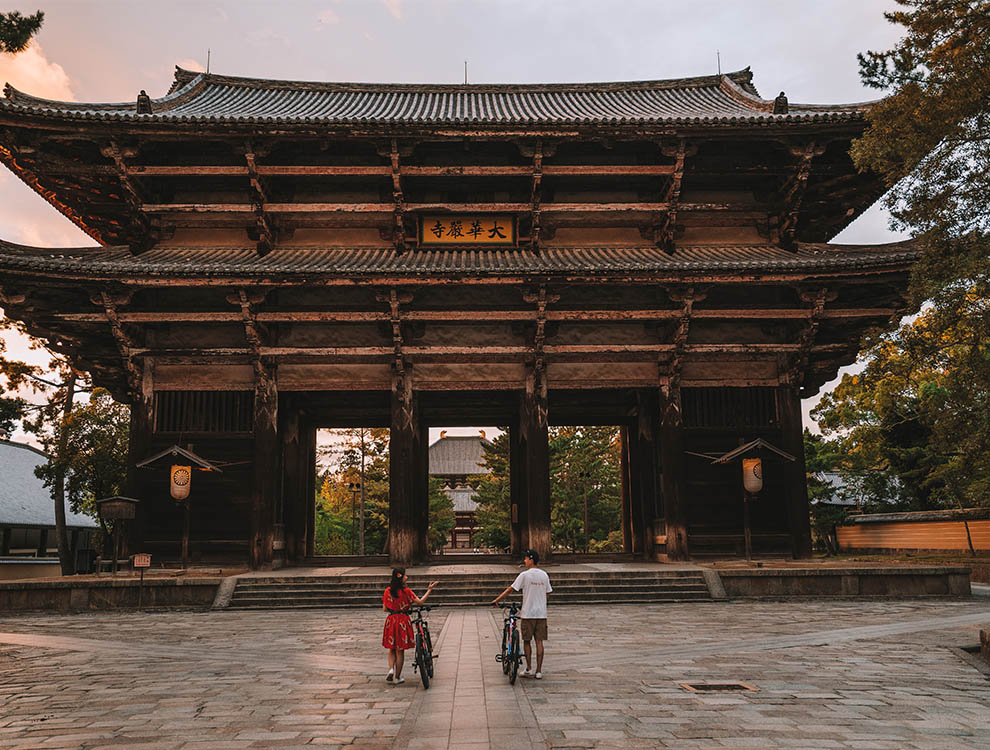 Set in the enchanting city of Nara that holds numerous historic treasures and a stunning deer park, Noborioji Hotel Nara is nestled at the foot of the temple of Kofuku-Ji. Japan’s capital city in the 8th century, Nara has some of the country’s oldest and largest Buddhist temples and Shinto shrines, many of which are World Heritage sites and are easily accessible via bicycle from the hotel. The Todai-ji and Horyu-ji temples are a must-visit. For a taste of rural Japan, go for a countryside spin through paddy fields to nearby Asuka Village. 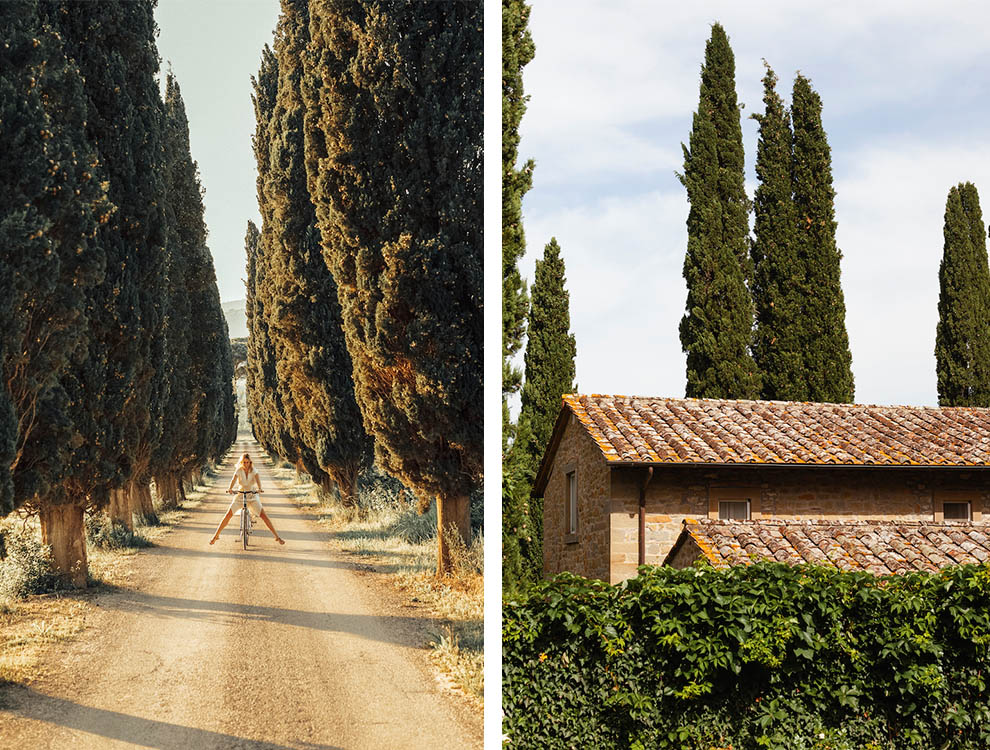 Time seems to move more slowly at Villa di Piazzano, a down-to-earth country estate on the border between Tuscany and Umbria. Grab a bike and head out to tackle some of those famous Tuscan hills, explore captivating medieval cities like Siena, or hop over the border to pretty Perugia. Cortona, with its Renaissance piazzas and ancient Etruscan heritage, is just a cypress tree-lined cycle away. 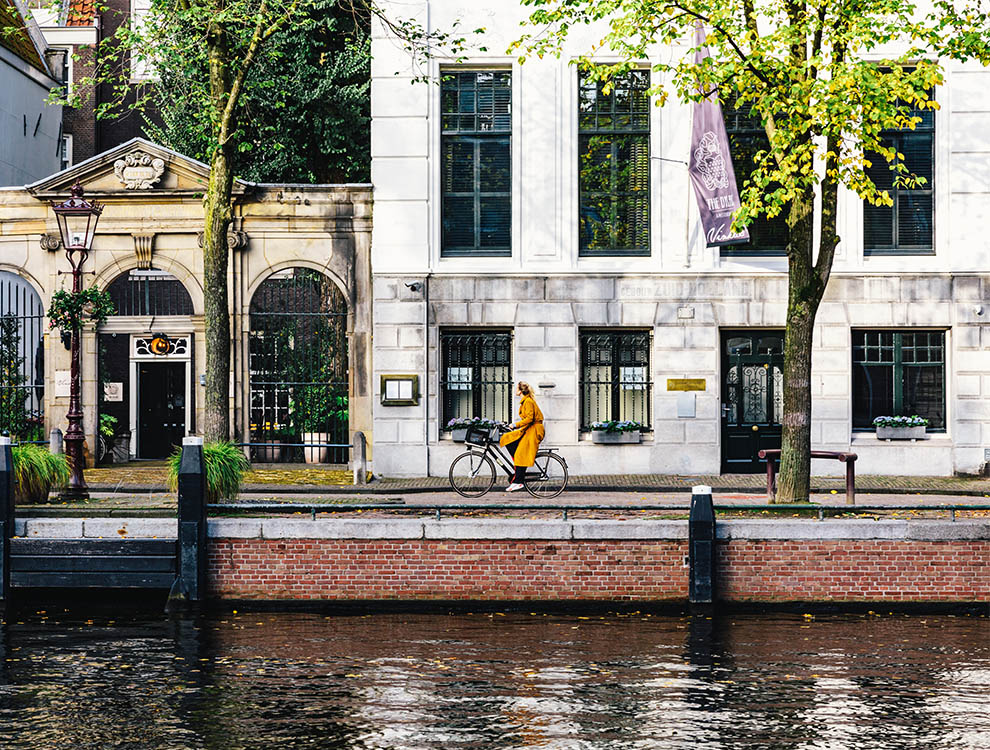 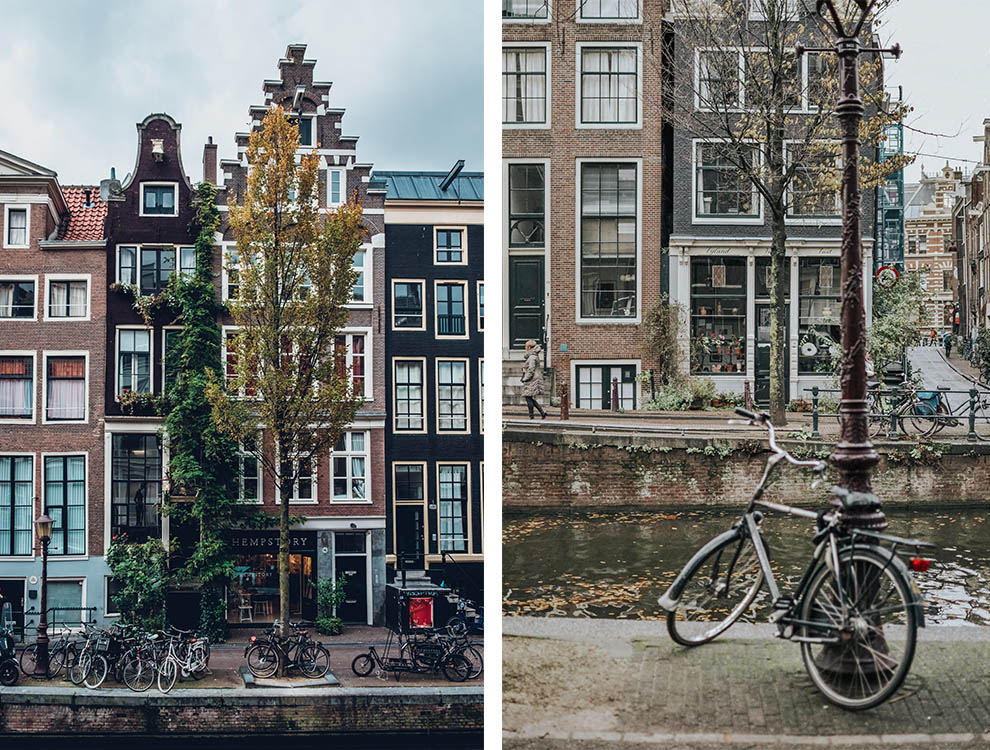 On any visit to the city of canals, you’ll quickly encounter that ubiquitous Amsterdam presence: bikes. Impeccably dressed locals seem to glide effortlessly around the city’s cycle lanes. And with such an extensive network of paths, it’s easy to follow your own, self-guided tour. Hire a bicycle from The Dylan, an elegant former 17th-century waterfront theatre, and discover the chic shopping district, the Negen Straatjes. 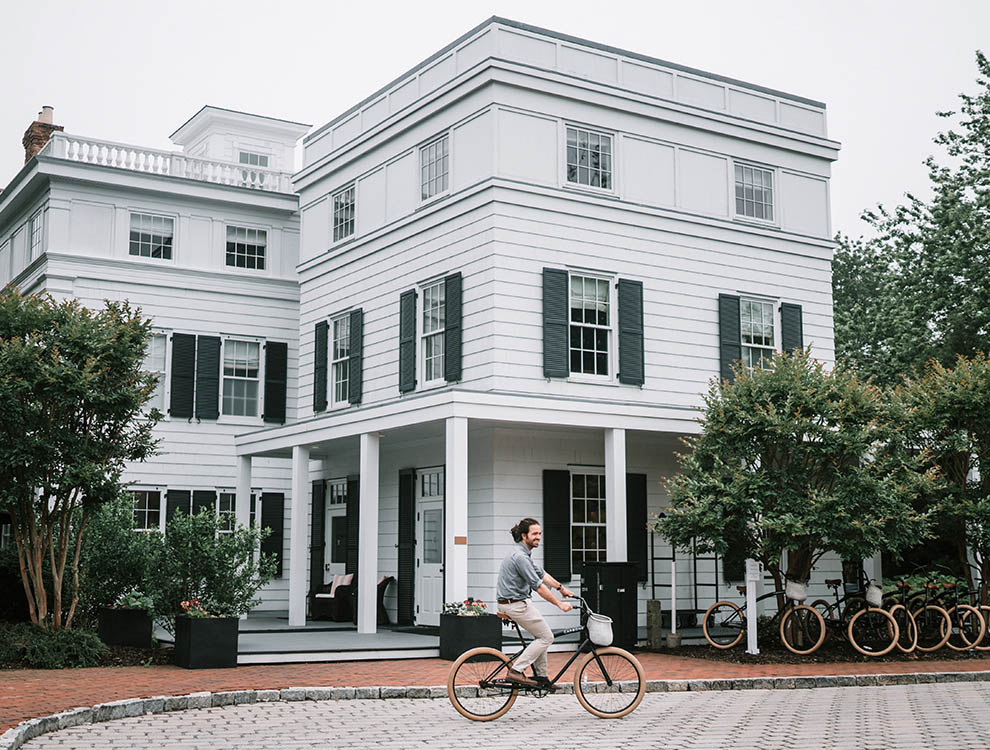 A renovated 19th-century mansion near Long Island’s eastern shore, Topping Rose House is the only full-service hotel in the Hamptons. The area’s beautiful beaches a must – and with the hotel’s bicycles, they’re easy to reach. Long Island is also famed for its vineyards and – of course – the Gatsby-style mansions on its Gold Coast. Plenty of scenic cycle material here. 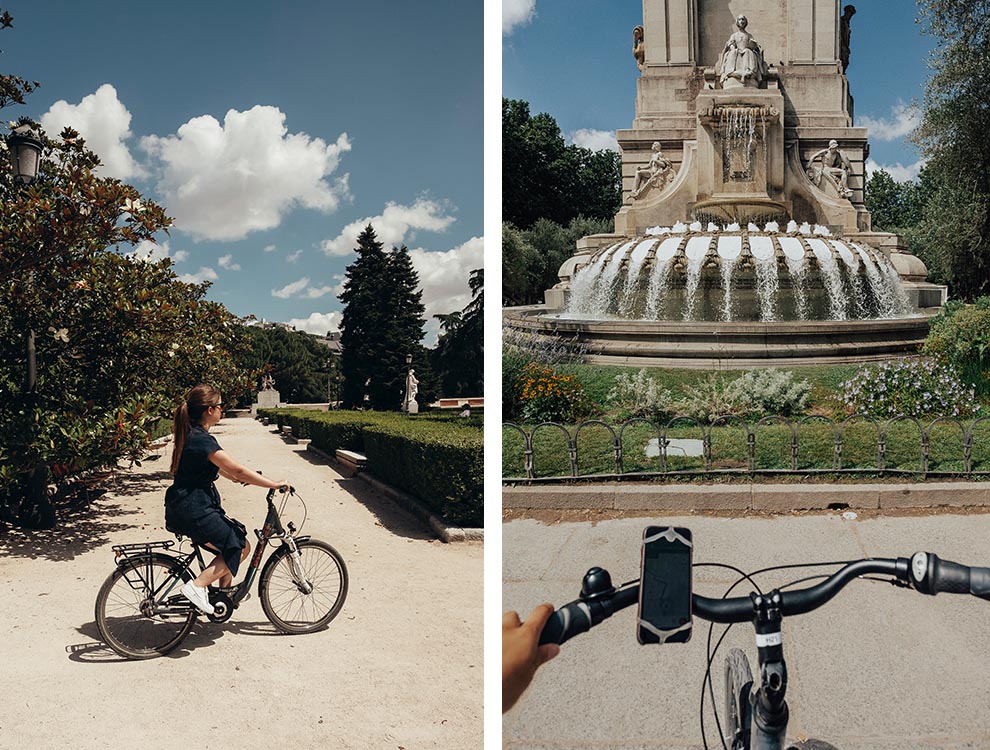 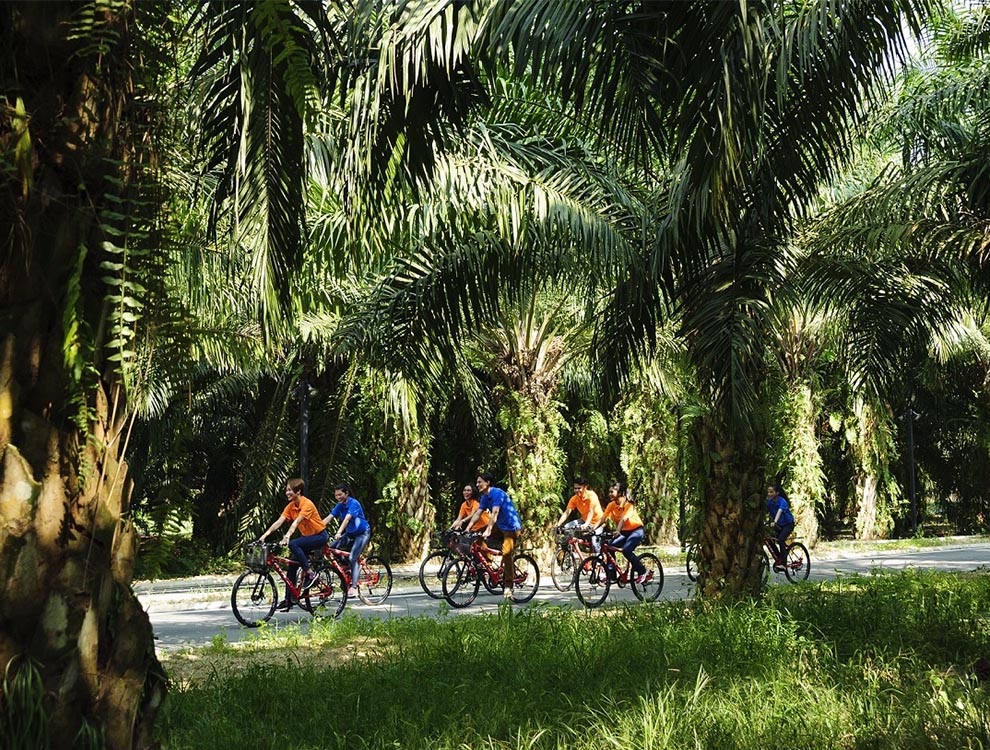 In keeping with its impressive eco-friendly ethos, Mangala Resort & Spa encourages guests to discover its surrounding lush patchwork of wetlands and palm forests by the most considerate means possible – from a nature walk guided by the resident naturalist, a kayak across the lake, or a cycle around the fauna-filled grounds accompanied by tropical birdsong. 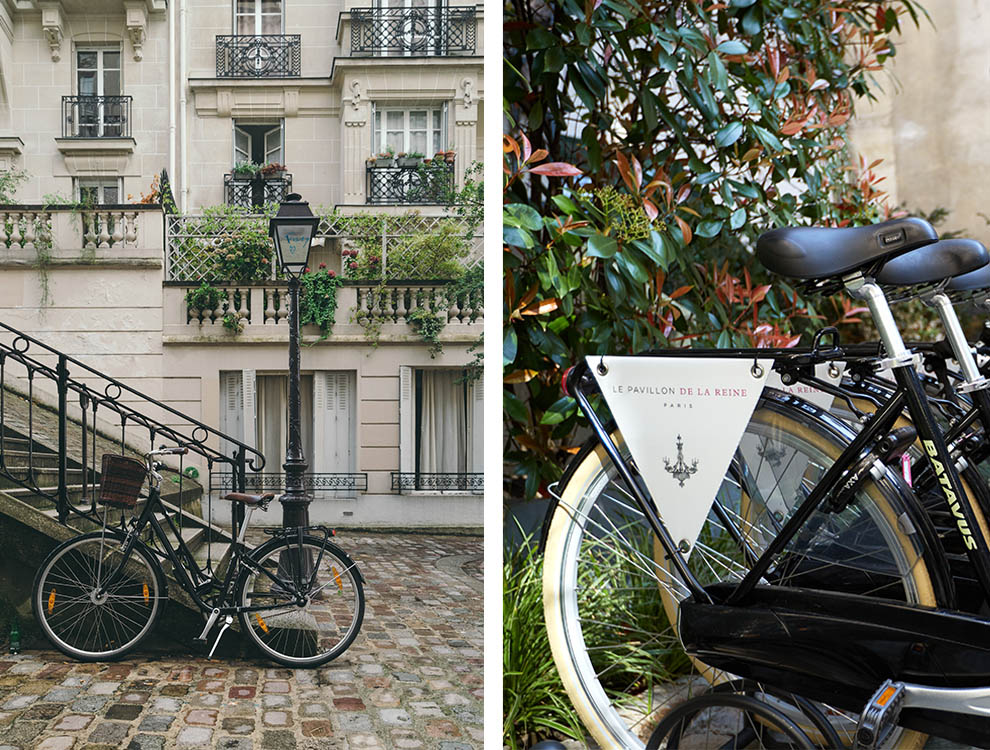 Set on one of Paris’ oldest and most beautiful squares, Le Pavillon de la Reine & Spa is a secret world away from the bustle of the city. This impressive 17th-century residence, clad in greenery, faces a beautifully manicured garden and has a pretty flower-filled courtyard, along with a rack of complimentary bicycles for guests. If you’re hesitant about tackling the infamously busy roads, start with a guided bike tour. If you’d rather go it alone, the Seine river path and large parks such as Bois de Boulogne are ideal for quieter rides. 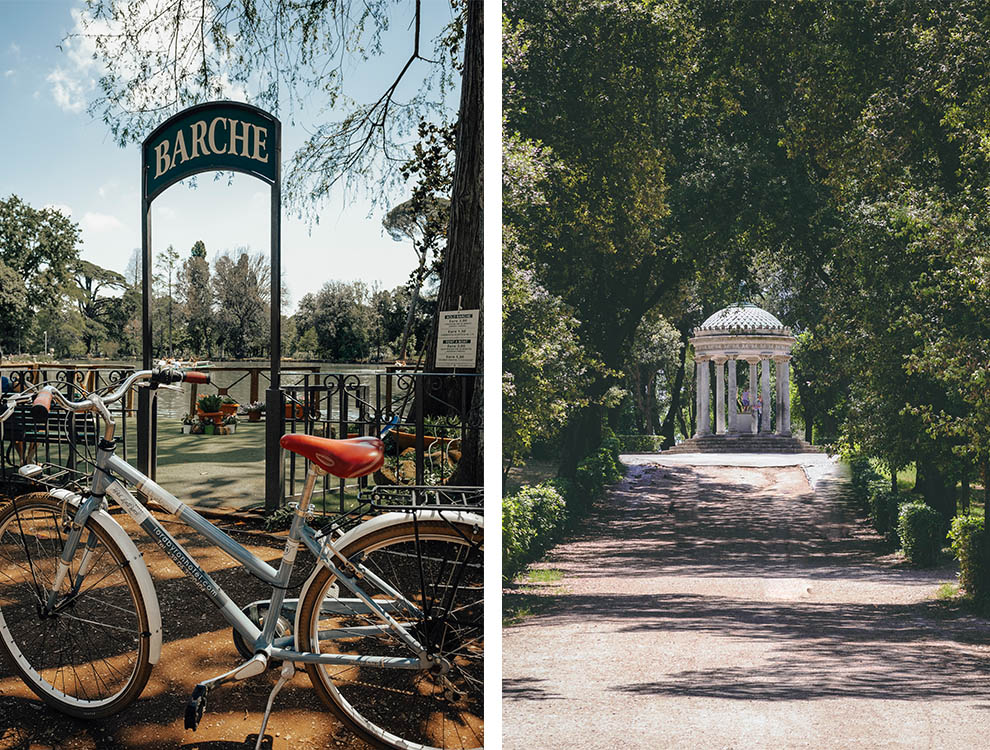 A short cycle from the beautiful Villa Borghese, Hotel Lord Byron is a hidden gem beautifully decorated in 1930s style. Start the day with a picturesque pedal through the nearby Borghese Gardens, close to popular Eternal City landmarks such as the Spanish Steps and Piazza del Popolo. Access to the gardens is free of charge, and they’re open from dawn to dusk. 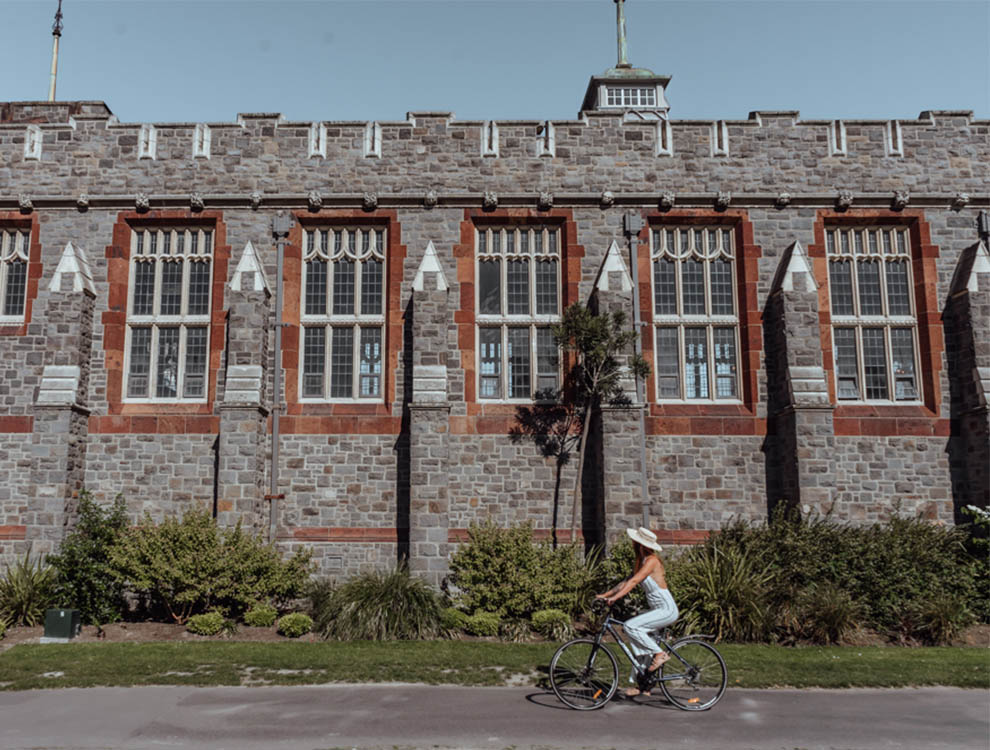 A stylish urban sanctuary within easy cycling distance of Christchurch centre, The George is situated in a peaceful spot overlooking the Avon River and Hagley Park. Known as the Garden Town thanks to the numerous parks and green, open spaces, Christchurch promises sunny cycles through beautiful botanical gardens with the feel of a quintessentially English town. 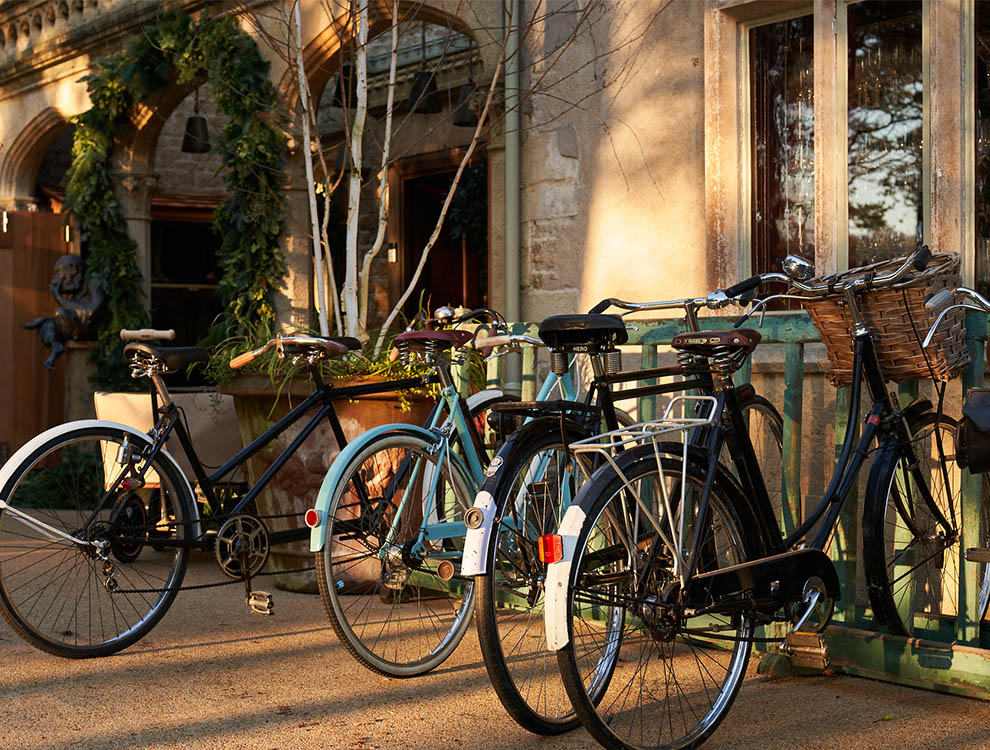 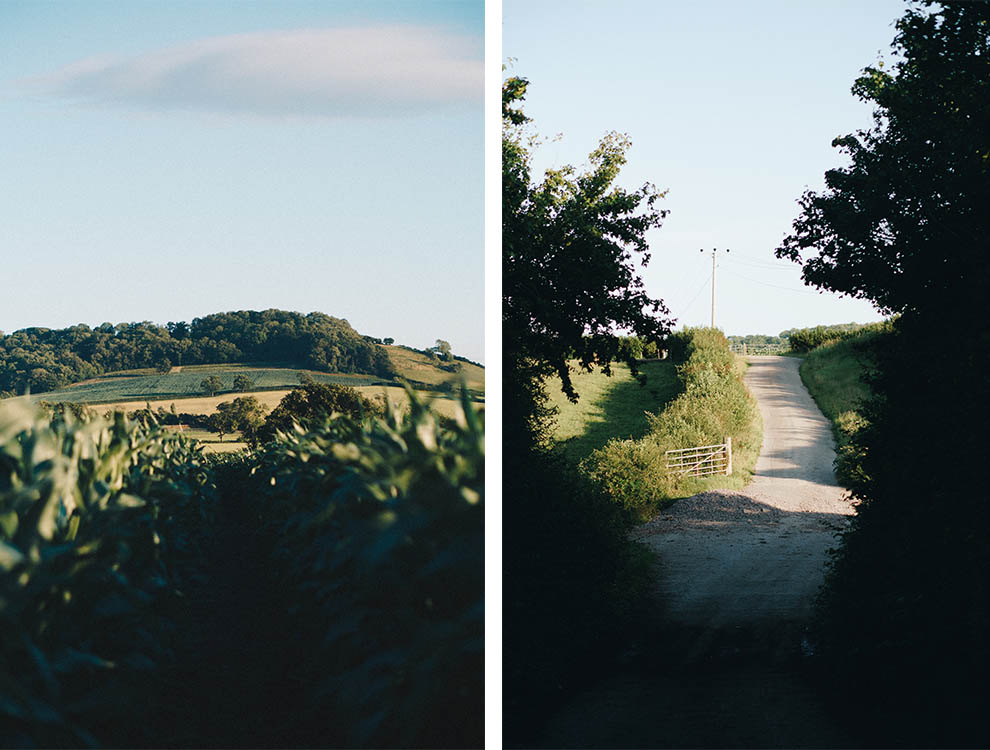 The rolling hills of Somerset form a glorious backdrop to the honey-coloured Georgian house that is Homewood. The hotel’s complimentary bicycles can take you from town to country, with a scenic six mile cycle to Bath’s cobblestoned city centre in one direction, and the Somerset Lavender Farm just down the road for a Provençal day out. Read our ultimate city guide to Bath here. 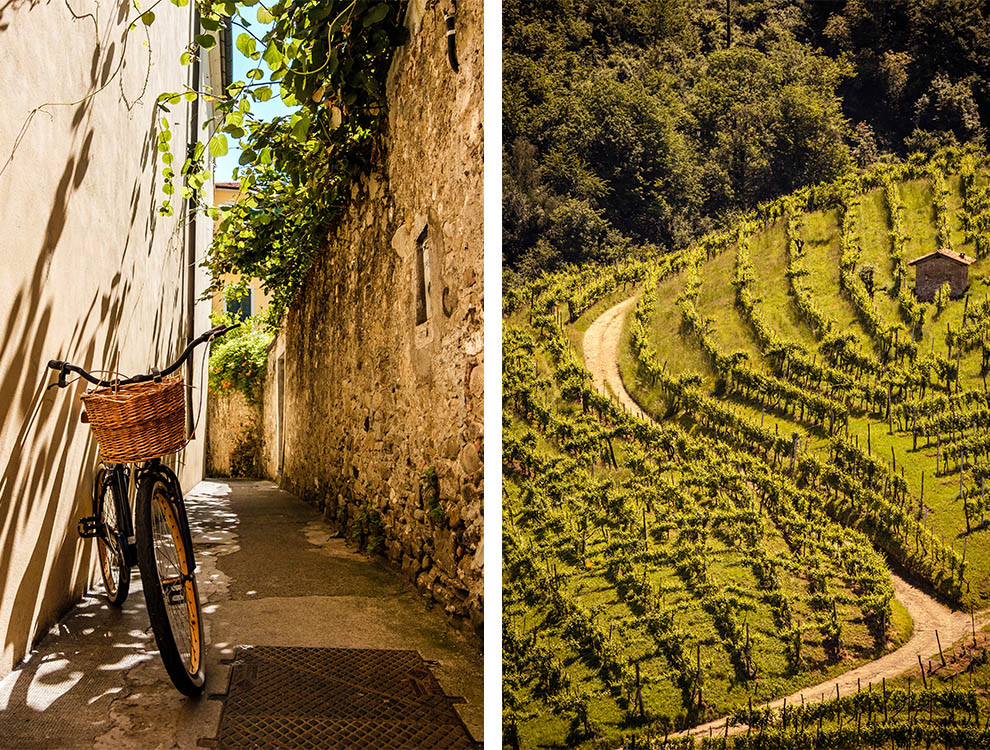 Overlooking beautiful parkland, filled with swathes of fragrant pine and cedar trees, Villa Soligo is perfectly positioned for guests to explore the Prosecco Hills. Vineyards as far as the eye can see, long, winding trails with scenic stop-off points to enjoy Italy’s most famous fizz. The villa not only offers guided bike tours and various cycle maps graded by difficulty, but also boasts an on-site bicycle workshop for any holiday repairs. 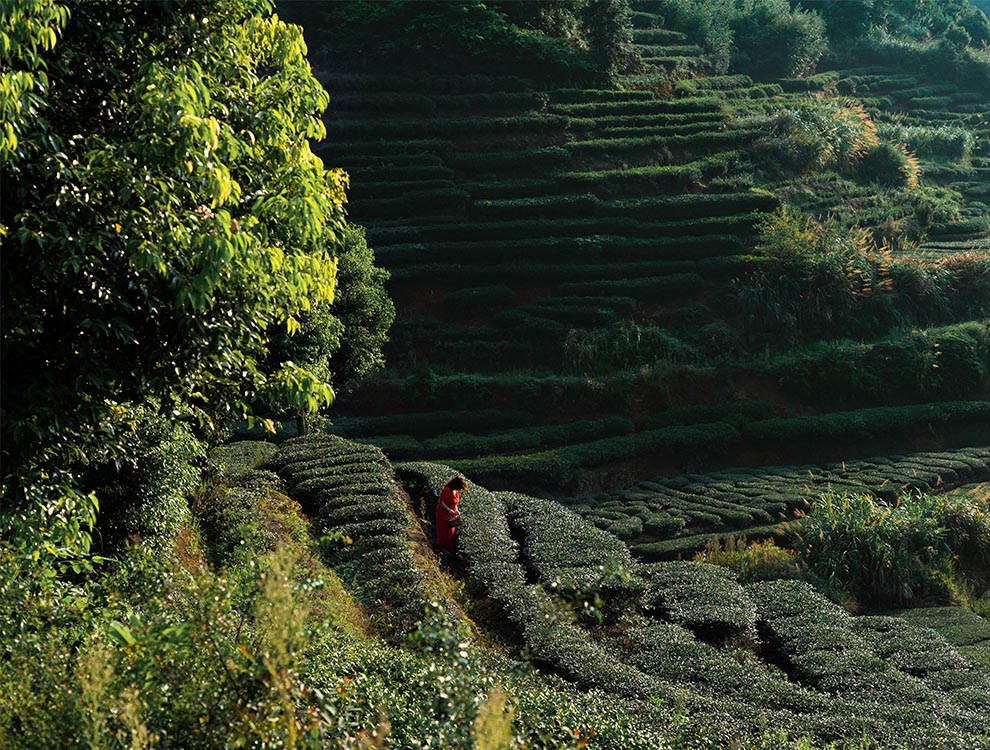 Among the tea terraces of southern China you’ll find Elite Spring Villas – a collection of Zen-infused villas beside natural hot springs. When you’re ready to explore, hop on one of the resort’s bikes to cycle through the hills of Anxi. Take a tea-tasting tour to try revered varieties such as Iron Guanyin, a variety of Oolong tea. Or go slightly further afield to Qingshuiyan, a hillside temple built almost a thousand years ago.