April Hot List: 4 UK hotels to have on your radar

As the UK slowly emerges from its national lockdown, there is a sense of springtime optimism in the air. Picnics are popping up a plenty, pub gardens are overflowing with Pimms, and hotels are opening their doors again for what we hope will be a great British summer. Just in time for the ease of restrictions, we’ve added four must-visit boutique hotels to our UK portfolio for your staycation wishlist… 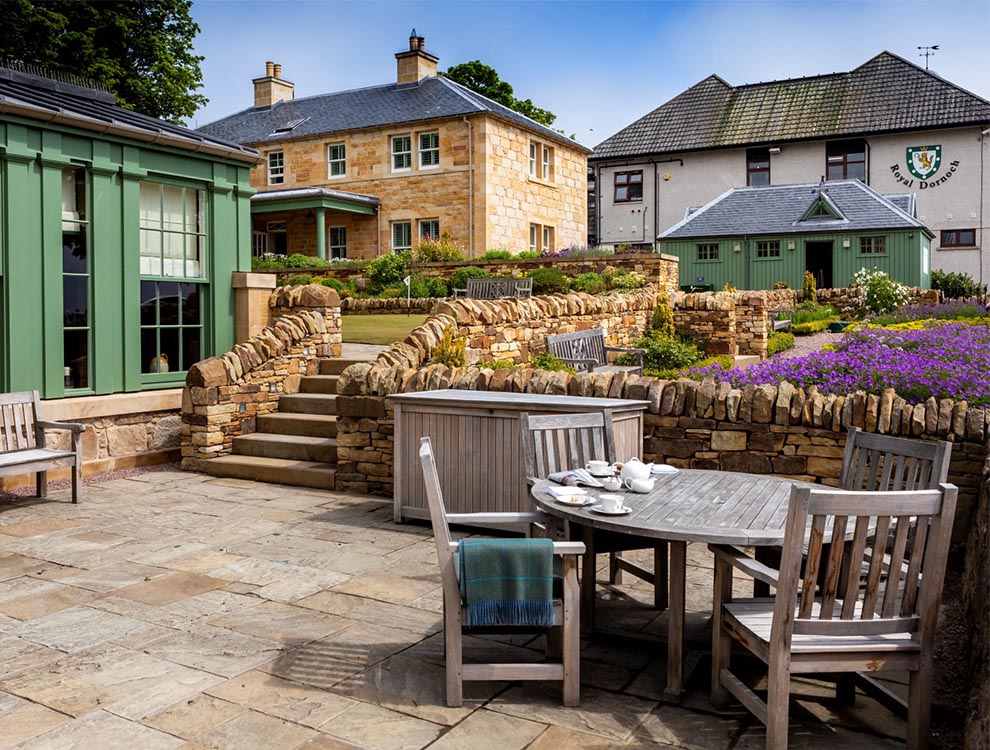 The award-winning Links House at Royal Dornoch effortlessly fuses tradition with a modern sensibility. The hotel is Scotland’s most northerly luxury destination and sits in the rugged and romantic Scottish Highlands. It boasts 15 luxurious rooms, eight of which are luxury suites alongside a lavish penthouse apartment – Glenshiel – the hotel’s most recent addition. All 15 rooms are named after salmon rivers in the North Highlands and feature underfloor heating, Hypnos beds and Italian linen. Links House at Royal Dornoch is enveloped by beautiful grounds and manicured gardens, including a significant herb garden that supplies the hotel’s kitchens. Undoubtedly the allure of golf at the spellbinding Royal Dornoch is a big draw for guests, but beyond golf, Dornoch town has plenty of attractions, including The Dornoch Cathedral and the award-winning Carnegie Whisky Cellars. Further afield, guests can enjoy salmon and trout fishing and drives around the North Coast 500 – a 500-mile route around the top of Scotland.

The hotel officially opens on 26th April, with ‘a flavour of Mara’ launching the same day – a new dining concept led by Executive Chef James McDonald designed to celebrate the best of Scotland’s larder. It perfectly complements the hotel’s other eateries, The Courtroom and The Courtyard.

SLH Insider Tip: Dornoch enjoys a microclimate since it lies only six degrees south of the Arctic Circle and is circled by the sun so enjoy its sandy beaches and longer days by going for a cycle with the hotel’s resident mountain bike guide. 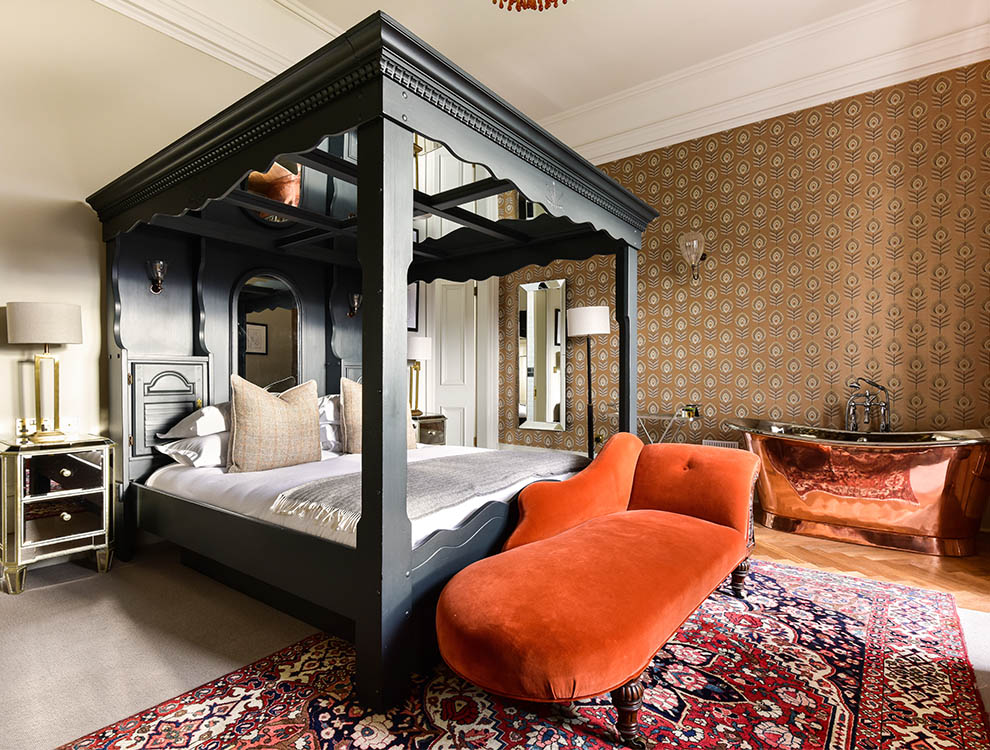 Bringing a breath of fresh Orkney air to the heart of the Scottish capital, The Dunstane Houses stylishly blends the owners’ Orcadian roots with the neoclassical design of old-town Edinburgh. The hotel is split between two meticulously restored Victorian townhouses which stand across the road from each other (Dunstane House and Hampton House) and provide 35 of the most generously sized rooms and suites Edinburgh has to offer.  Think warm hues of ochre, burnt orange, teal and a sumptuous combination of locally made tweeds and velvets, dotted with roll-top baths and open fires. 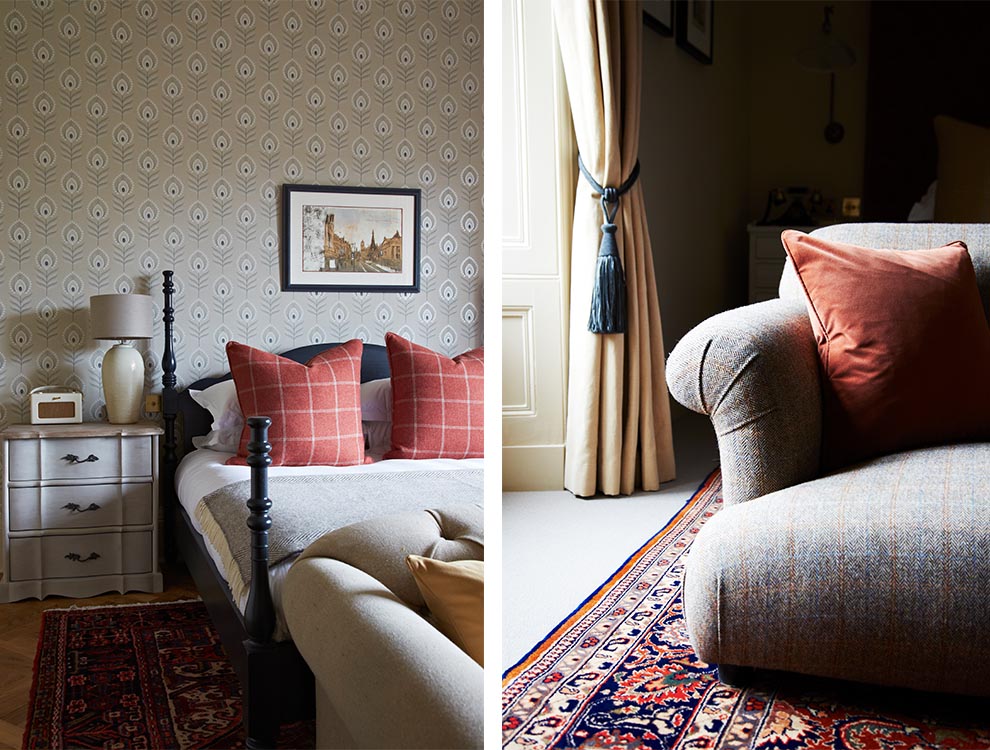 Meet the Mowats, owners of the Dunstane Houses, in our Independent Minds interview here.

Ba’ Bar is the hotel’s all-day Scottish dining offering, which is based on the Kirkwall Ba’ – the traditional street football game that has been played in Orkney for centuries. Boasting a collection of over 70 different malt whiskys, guests can sip on Scotland’s finest while getting a taste for Highland culture – and the impressive selection of artisan gins means you could stay for a week and never have the same G&T twice.

Beyond the characterful and evocative walls, the city’s Old town awaits, only a 15-minute scenic stroll away. Guests are also just a short drive from some of Scotland’s most sought-after beauty spots, from the fabled peaks of the nearby Pentland Hills to the mystical shores of Cramond Beach, Gullane or Elie. Four-legged friends are also welcome at this pet-friendly hotel, where they’ll be welcomed with a dog-friendly hamper and glass of ‘paw-secco’ on arrival. 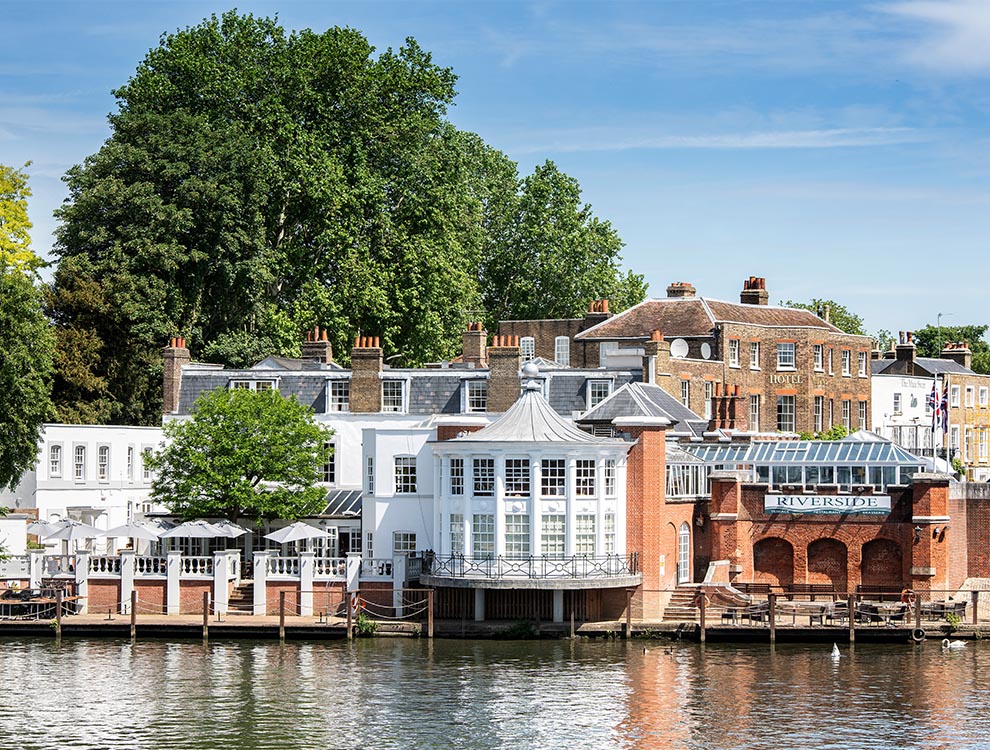 With its waterfront location and royal connections, The Mitre Hotel can easily be described as ‘fit for a king’ or his friends at least. The Grade II-listed property launched in September 2020 and was originally built in 1665 to accommodate King Charles II’s courtiers. It has been reincarnated numerous times throughout the centuries, currently, as the elegant 36-room hotel. The Mitre Hotel enjoys an enviable position sitting on the banks of the River Thames in Hampton Court and provides a relaxed and stylish retreat where no two guest rooms are the same. Interior designer Nicola Harding has given each room an individual stamp, with clever use of contrast and coordination. Her refreshing palette of bold colours and textures gives the hotel a uniquely playful ambience while paying homage to its heritage and neighbourhood. Rooms and suites come with either views over the River Thames, Hampton Court Palace and garden or picturesque internal courtyards. 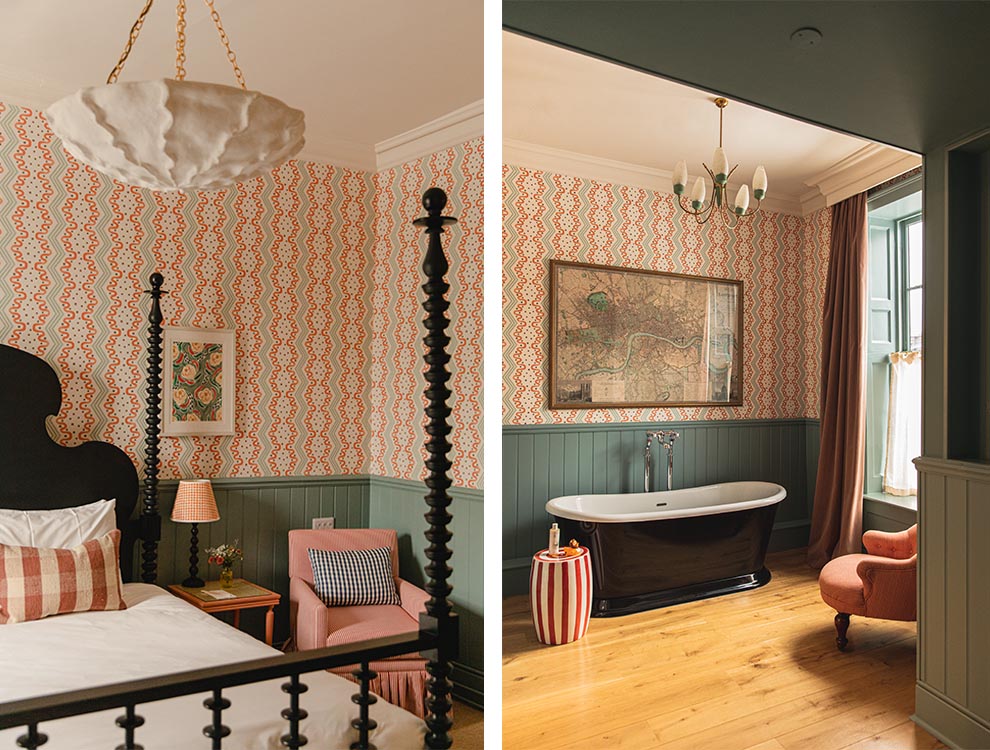 Food takes centre stage at the hotel with a 60-cover riverside restaurant (1665), a 70-cover brasserie and bar (CopperNose), an 80-cover Orangery, and a large riverside terrace home to the world’s first stand-alone Whispering Angel Bar. The boat house bar is perfect for enjoying sundowners with a cold glass of the world class Whispering Angel rosé in hand. The hotel will reopen with a packed programme of activities, including bike and private boat picnics, Live Jazz on the Terrace and a ‘Taste of summer’ supper club, amongst other entertainment. 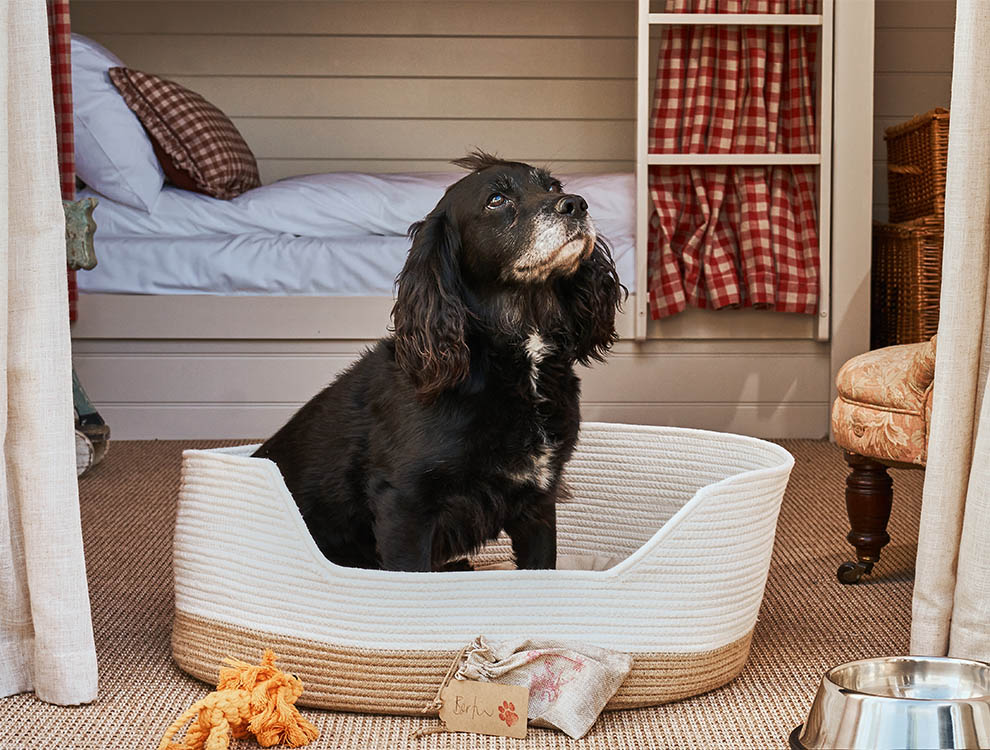 Well-behaved dogs are welcome to stay in the five dog-friendly rooms at The Mitre, located on the ground floor of the hotel with outside terrace access. You can dine with your dog in the Coppernose restaurant for breakfast, lunch, and dinner, after working up an appetite on one of the many scenic walks surrounding the hotel, including The River Path and Bushy Park on your doorstep. 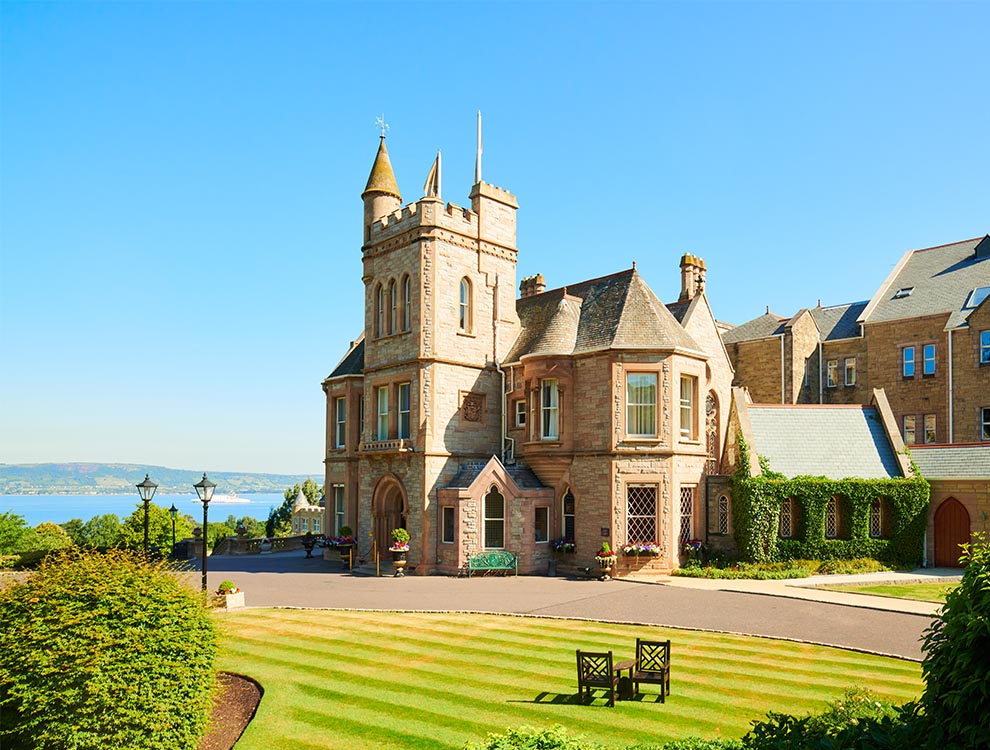 Northern Ireland’s first five-star hotel, Culloden Estate and Spa stands majestically on the slopes of the Holywood Hills, overlooking Belfast Lough and the sprawling County Antrim Coastline. There are 98 well-appointed rooms and suites within the Gothic property, which was originally built as the official palace for the Bishops of Down. Last year the hotel unveiled a significant renovation to its leading spa, which features a Tylarium (steam and sauna combo), large pool, Jacuzzi, and curated ESPA treatments.

With three different dining options, you’ll be spoilt for choice at Culloden. From fine dining at The Vesper and more relaxed dining at The Lough Bar to Culloden’s own onsite pub – The Cultra Inn, where guests can mingle with locals as they pull their own pints of Guinness. The hotel chimes beautifully within the surrounding 12 acres of secluded gardens and woodland and will reopen its palatial doors at the end of May. Guests will be welcomed back with a new Bridgerton-themed afternoon tea, the return of the hotel’s summer ‘Art in the Garden’ exhibition – which will showcase the works of Dali, Picasso, Warhol and Banksy, to name a few – and the introduction of a new outdoor ‘Bollinger Bus’ to heighten the experience of luxury alfresco dining.

SLH Insider Tip: The County Antrim Coastline is famed for being featured in Game of Thrones and has also been named one of the world’s top 16 coastlines, so hire a Culloden bicycle and explore it for yourself at leisure.