5 of the best Christmas light displays in the world

Though many of us might be staying closer to home for the holiday season this year, a winter wonderland of twinkling lights and festive delights can still be enjoyed from a distance. The most magical time of the year has never been so needed, so what better way to lift your spirits than to see these seasonal street lights (first hand, or from afar).

Home to the largest holiday lights display in the UK, the skies above Regent Street, St. James’s, Oxford Street and Carnaby Street are lit up with hundreds of thousands of lights and decorations from November to January, while the picturesque piazza and cobbled market streets of Covent Garden are the perfect backdrop for its annual 60-foot tree (sparkling with some 30,000 lights). Although there will be no switch-on ceremonies this year due to social distancing measures, it is still uplifting to see some of the capital’s most fashionable areas all dressed up for Christmas. 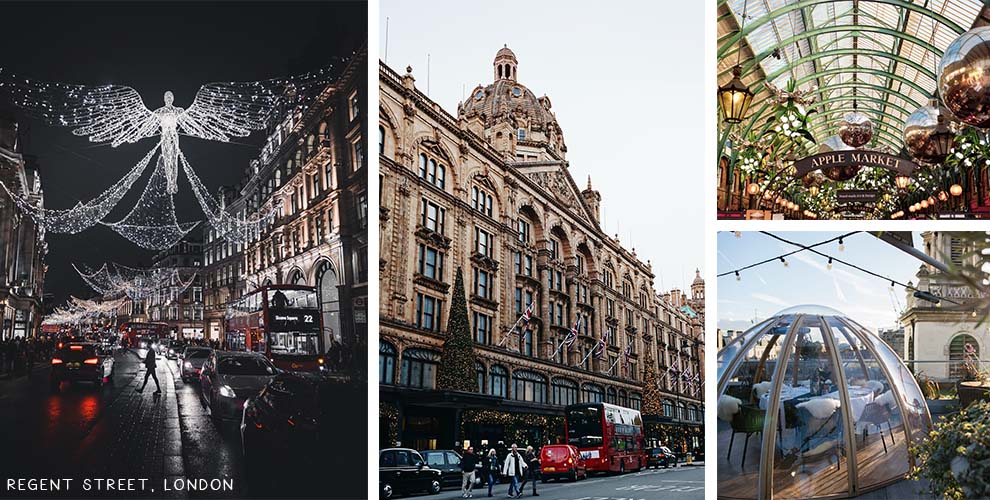 Any of our ten London boutique hotels will put you in the heart of the holiday action – The Capital Hotel, Apartments & Townhouse is literally yards from Harrods, Harvey Nichols and Sloane Street, the luxury stores of Knightsbridge are on the doorstep of The Franklin, while St. James’s Hotel & Club, Flemings Mayfair, and DUKES London are within walking distance of the West End.

Bright idea: For a private dining experience with some of the best views over the city, Vintry & Mercer’s roof terrace boasts two winter igloos which can accommodate up to six guests each.

For more than eight decades, the Rockefeller Center Christmas Tree has stood as a holiday beacon for New Yorkers and visitors alike. Though the lights, decorations, and stars might have changed over the years, visiting the iconic tree remains a quintessential New York holiday experience. This year, the 88th Rockefeller Tree will be displayed between West 49th and 50th streets and Fifth and Sixth avenues, and will be lit on the 2nd December 2020. Sadly, there will be no public access to the tree lighting ceremony this year, but you can still view the live national broadcast “Christmas in Rockefeller Center” from home on NBC. 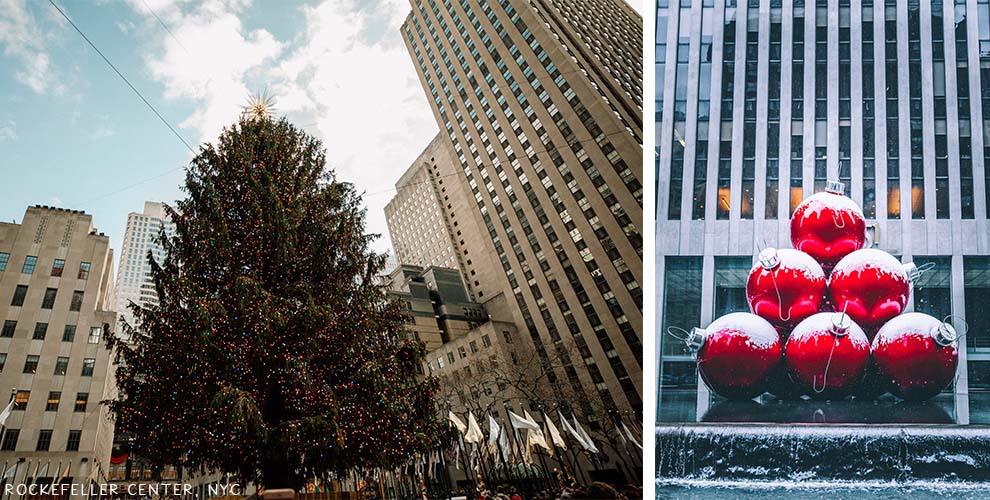 Our collection of luxury New York City hotels are all within easy reach of the Rockefeller Center, both on foot or via the instantly recognisable yellow taxis. Superbly central to Manhattan’s wealth of attractions, The Iroquois Hotel is a short walk away from Fifth Avenue, while HGU New York and Refinery Hotel New York draw a creative crowd in the trend-setting NoMad and Garment Districts.

Bright idea: Go for a spin around the picture-perfect Rockefeller ice rink, which is scheduled to open on the 21st November 2020 with limited tickets for social distancing reasons.

A long standing Christmas attraction for both locals and tourists, Tivoli Gardens have been the centre of Copenhagen‘s festivities since they opened in 1843. This year, the decorations in front of Nimb Hotel will have an extra sparkle, courtesy of a ten-metre tree decorated from top to bottom with 3,000 Swarovski crystals. During the annual Christmas light ceremony, Tivoli lake is illuminated with a dazzling display of lights and fireworks. 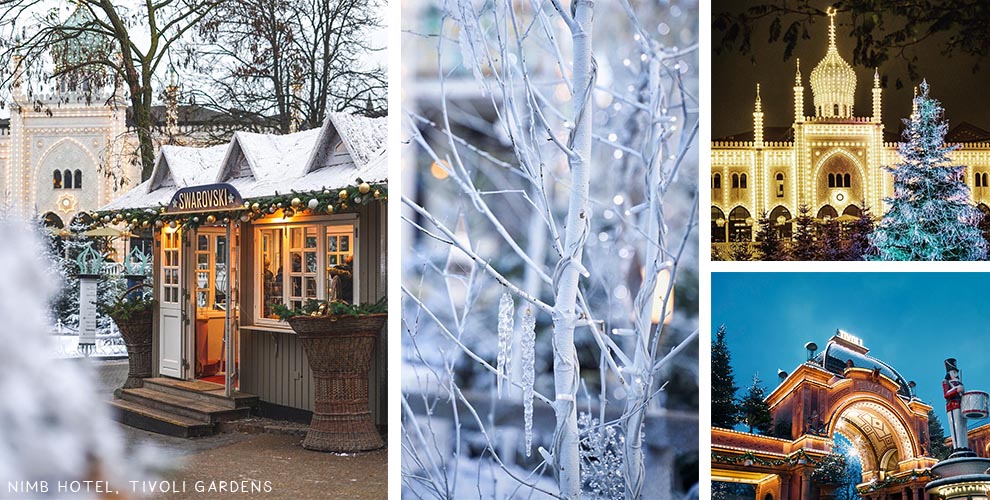 Bright idea: Visit Santa Claus in his grotto at Honey Cake Castle for some hot chocolate and to decorate your very own honey cake heart – admission is free for all the Gardens’ visitors, but tickets must be booked in advance.

It feels as though every tree-lined street is lit up during Tokyo’s Winter Illuminations, as many parts of the city put on one sensational display after another from November to February. From the Ao no Dokutsu (Blue Cavern) in Shibuya, to the 2km of pink LED lights designed to resemble cherry blossoms along the Meguro River (which will be displayed virtually this year), there is something different to see in almost every district. 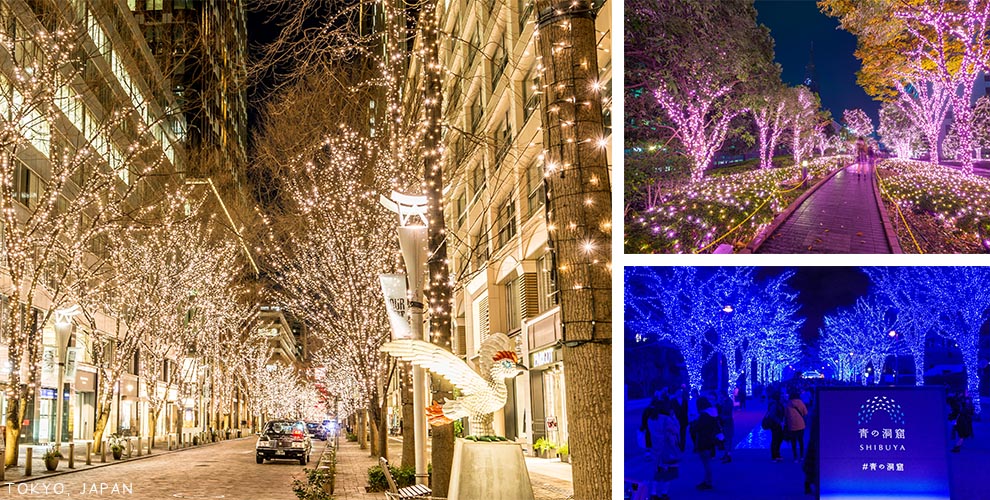 Either Hotel Gajoen Tokyo or The Tokyo Station Hotel makes the ideal base to explore the capital at its brightest – located in the hip neighbourhood of Meguro, the luminescent blossoms of Meguro-gawa Minna No Illumination (named for its environmentally friendly self-generated pink bulbs) are just a short stroll away from Hotel Gajoen.

Bright idea: One of the best views in the city is from the Mori Art Museum’s Sky Deck, overlooking the glittering illuminations below.

A highlight of the holiday season, Amsterdam Light Festival is celebrating its ninth edition this year with the theme When Nature Calls, featuring dazzling works by Dutch and international artists. Slightly dimmed-down for 2020, the festival will feature just nine installations which can be enjoyed through a theatrical walking experience, as a socially distanced alternative to the traditional viewing by boat. Time slots for the ‘Light Walk’ can be booked in advance online to experience the city’s canals at their most magical. 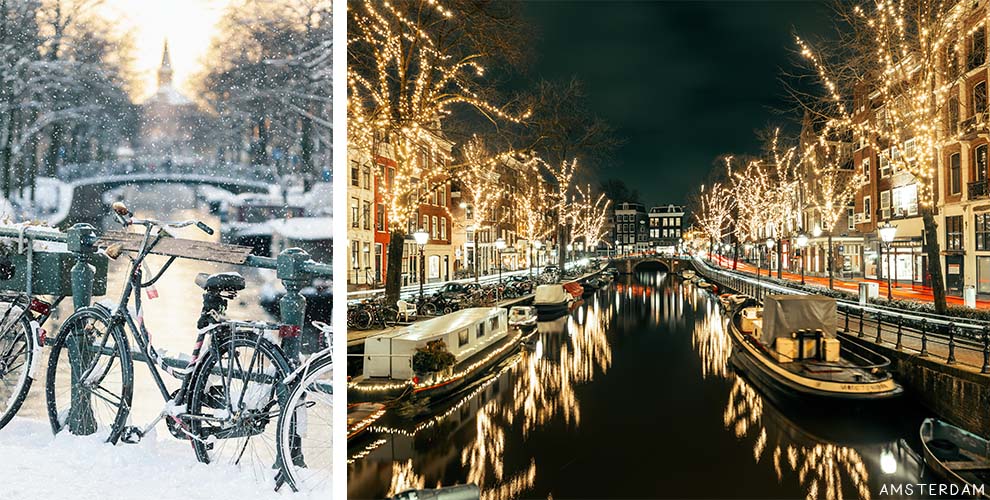 Our trio of Amsterdam boutique hotels are perfectly placed in the city centre, two of which are situated on some of the capital’s main canals – The Dylan, an elegant former 17th-century theatre, and Canal House, three historic merchant houses that overlook the Keizersgracht.

Bright idea: Celebrate Christmas like an Amsterdam local by indulging in some traditional Dutch sweets, including olieballen and appelbeignets.