Where to enjoy wildlife responsibly: 10 epic experiences for animal lovers

There is something undeniably magical about wildlife-watching, if done respectfully to the animals and their natural habitat. Driven by conservation and community spirit, a growing number of sustainably-minded safari hotels are encouraging responsible interaction with wildlife which balances animal welfare with the viewing pleasure of travellers. From a Kenyan retreat supporting rhino rehabilitation, to a Himalayan hideaway protecting the world’s only alpine crane species, these back-to-nature boutique hotels are proving that it’s possible to take a walk on the wild side while treading carefully on your safari destination of choice. 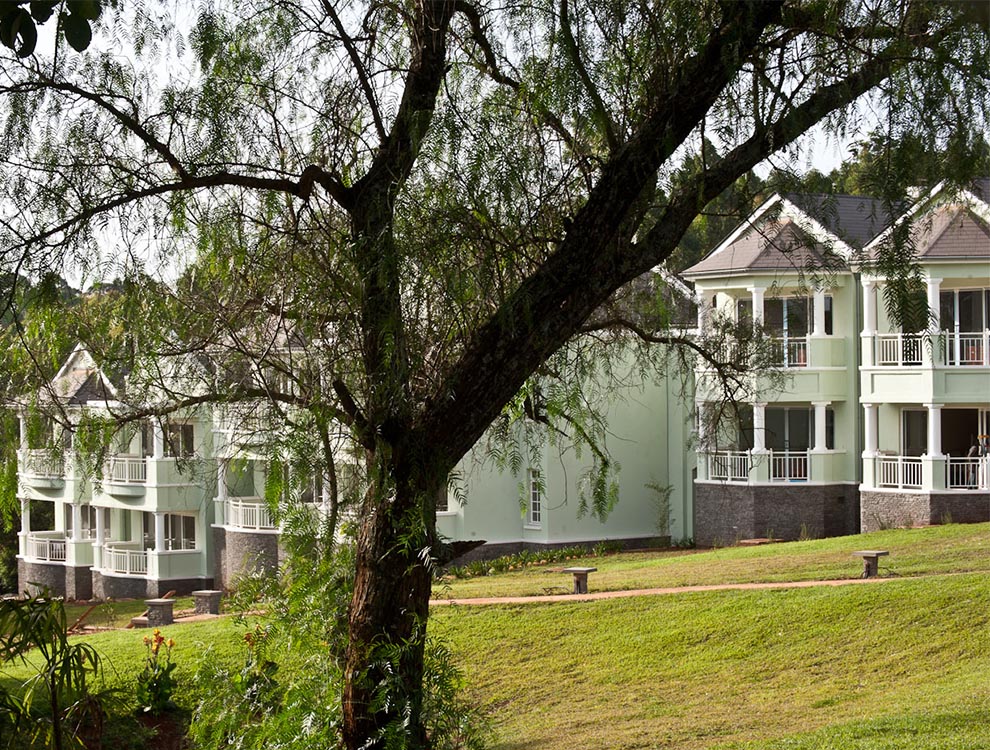 Nestled between Nairobi National Park and the foot of the Ngong Hills, Hemingways Nairobi is an all-suite boutique hotel far from the bustle of the Kenyan capital which purchases locally wherever possible to support its close-knit Karen Blixen community. Adventure-seeking guests are perfectly placed to enjoy the wide open grass plains and scattered acacia bush which play host to a wide variety of wildlife including the endangered black rhino, lions, leopards, cheetahs, buffaloes, giraffes, hyenas, and diverse birdlife with an experienced guide. 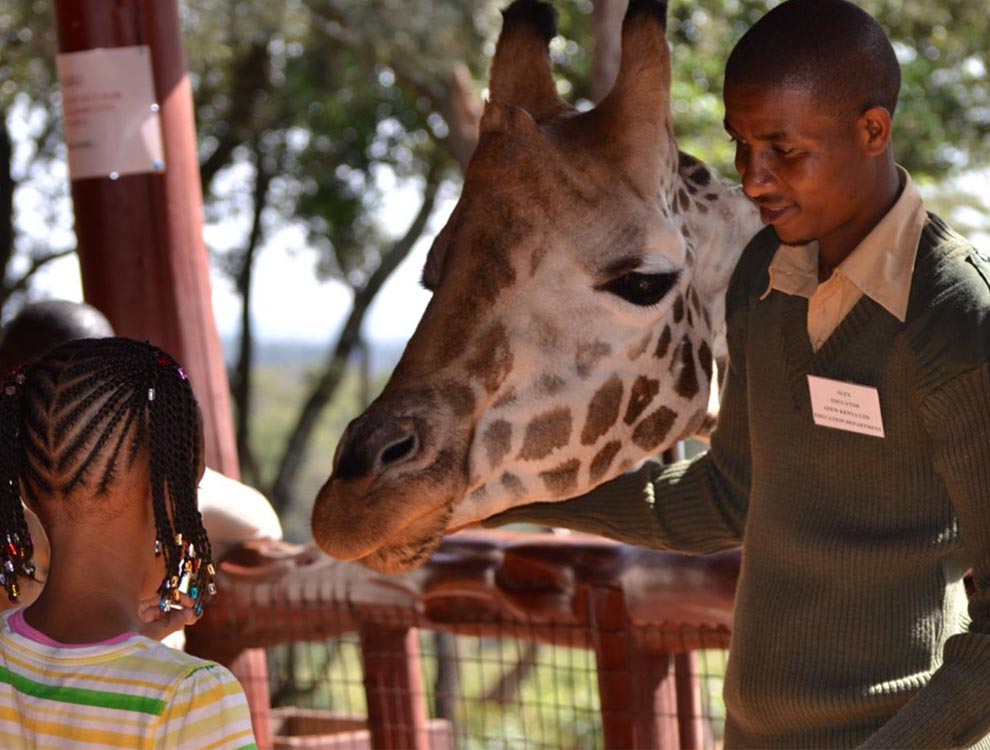 The hotel also encourages guest visits to the nearby Giraffe Centre (pictured above), a non-profit conservation and educational organisation established to protect the endangered Rothschild Giraffe species where visitors can hand-feed these gentle giants from an elevated platform, and to the David Sheldrick Wildlife Trust – the most successful orphan-elephant and rhino rescue and rehabilitation programme in the world. Spend some precious time in the company of young orphans and learn about the team’s invaluable rescue efforts, with the opportunity to adopt and sponsor members of the herd to make a more lasting contribution. 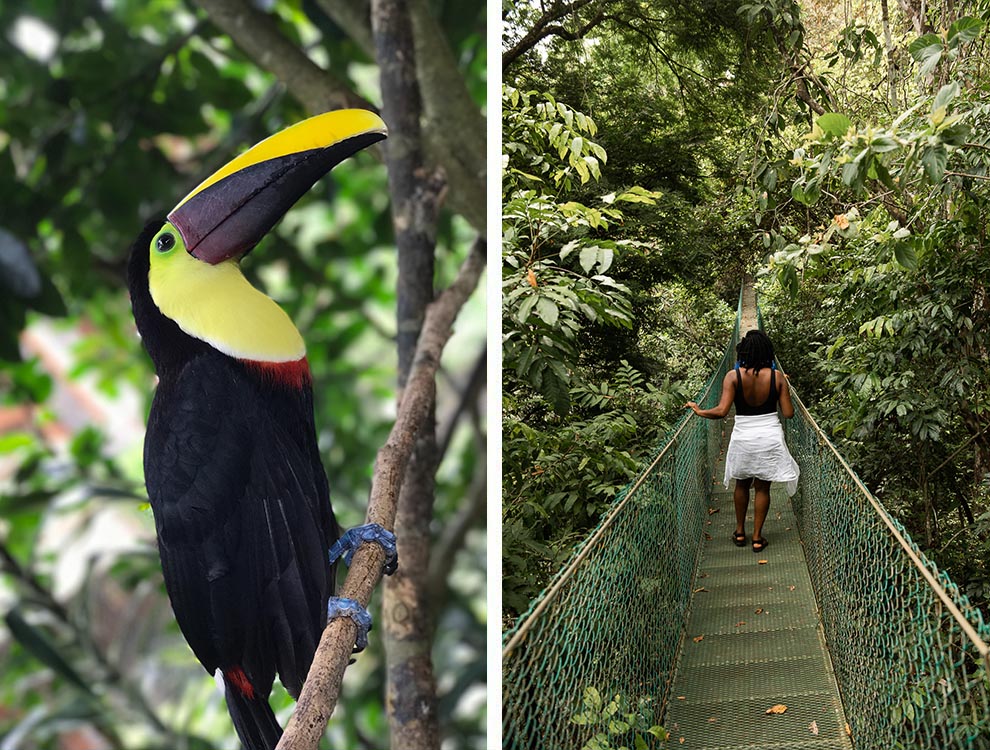 Natural beauty abounds at Hotel Nantipa, with its jungle-meets-ocean backdrop within easy reach of Montezuma Waterfall, Blanco National Park and Curú Wildlife Refuge. On the doorstep for Nantipa guests, this sustainably managed farm-style reserve is the first of its kind in Costa Rica, which is home to an array of wildlife – from white-faced monkeys and scarlet macaws to iguanas and coyotes – in addition to one of the most beautiful beaches and protected bays on the Nicoya Peninsula. 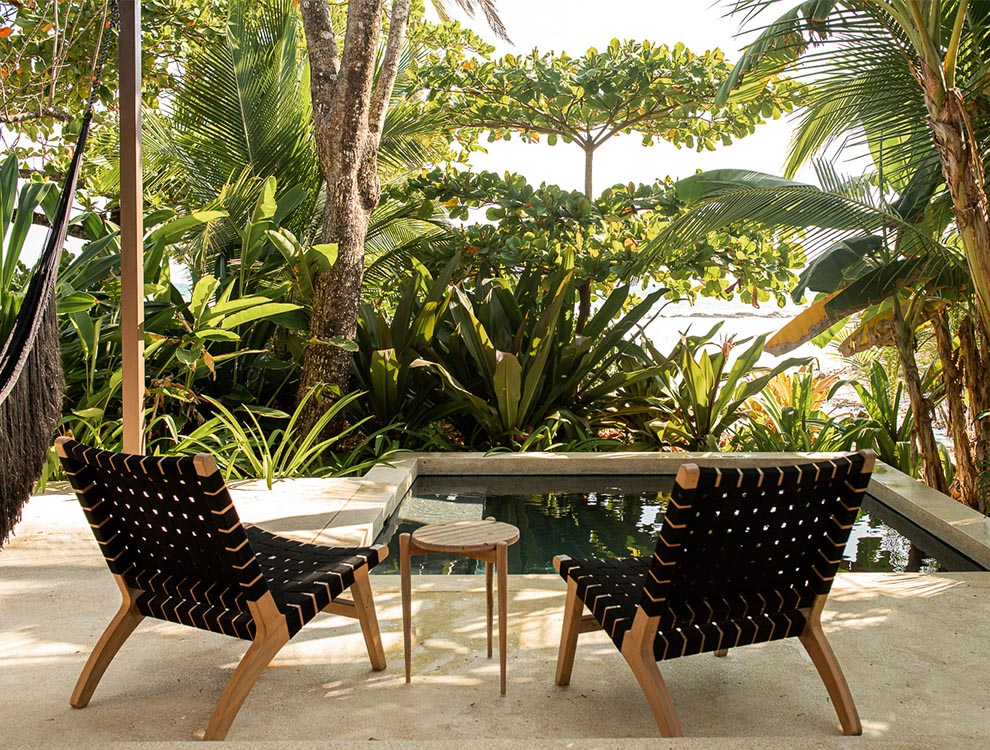 The refuge protects its threatened and endangered forested habitats such as mangroves, tropical moist and dry forests, and coral reefs, alongside reintroducing various species into remote parts of the reserve through its ‘Set Us Free’ project. Learn the rainforest’s secrets from one of the Curú ecologists or marine biologists, either on foot or on horseback, before returning to Hotel Nantipa which rewards guests who participate in the daily beach clean-up with a refreshing smoothie from its toes-in-the-sand bar.

3. Dolphin spotting at Bay of Many Coves, New Zealand 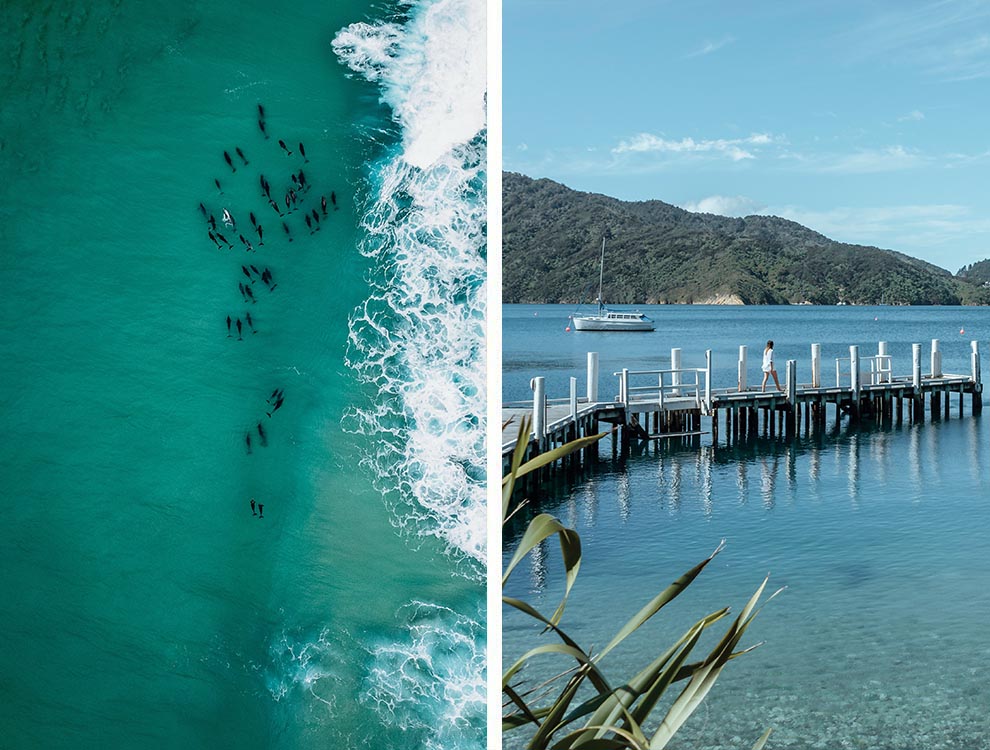 Set in a tranquil cove with beautiful views of the Marlborough Sounds, Bay of Many Coves is surrounded by an eco-marine haven, way off the beaten track. The clear cool waters, sheltered coves and native bush backdrops provide a spectacular setting for wildlife watching, where playful fur seals and island birds can be spotted from your private balcony. Kayaks and paddleboards are available for those looking to take to the water, while the half-day ‘Swim with Dolphins’ experience in Cloudy Bay and Cook’s Strait is a once-in-a-lifetime opportunity to observe large pods of dolphins with an ethical marine guide from E-Ko Tours, without disturbing the animals’ natural feeding, resting and migrating behaviours. 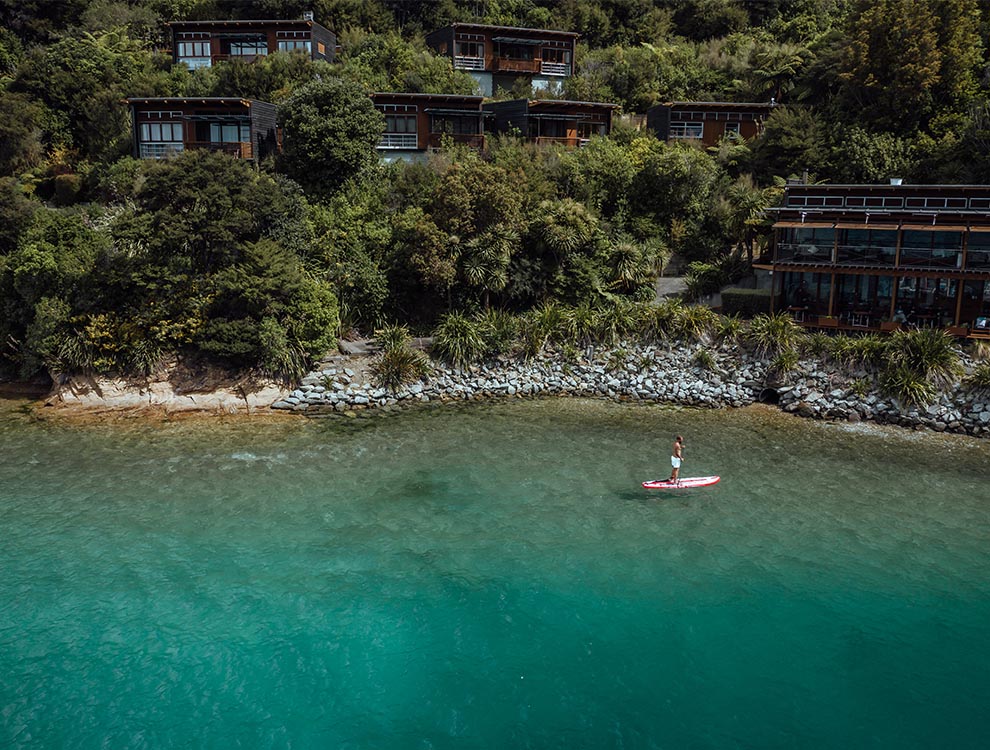 E-Ko Tours was the first SMART (Sustainable Marine Mammal Actions in Recreation and Tourism) operator in New Zealand to be certified by the Department of Conservation, and the very first World Cetacean Alliance dolphin swimming operation in New Zealand. As the only operator in Picton whose guests are able to swim with dolphins, E-Ko organised encounters are respectful and relaxed. The marine-friendly group follow practices that allow the dolphins to choose whether they interact with tourists or not, and constantly constantly rotate the species that they swim with to minimise pressure on the local dolphins and ensure their wellbeing. Meanwhile, nearby Motuara Island has a resident pod of Hector’s Dolphins, thought to be the rarest marine dolphin in the world. 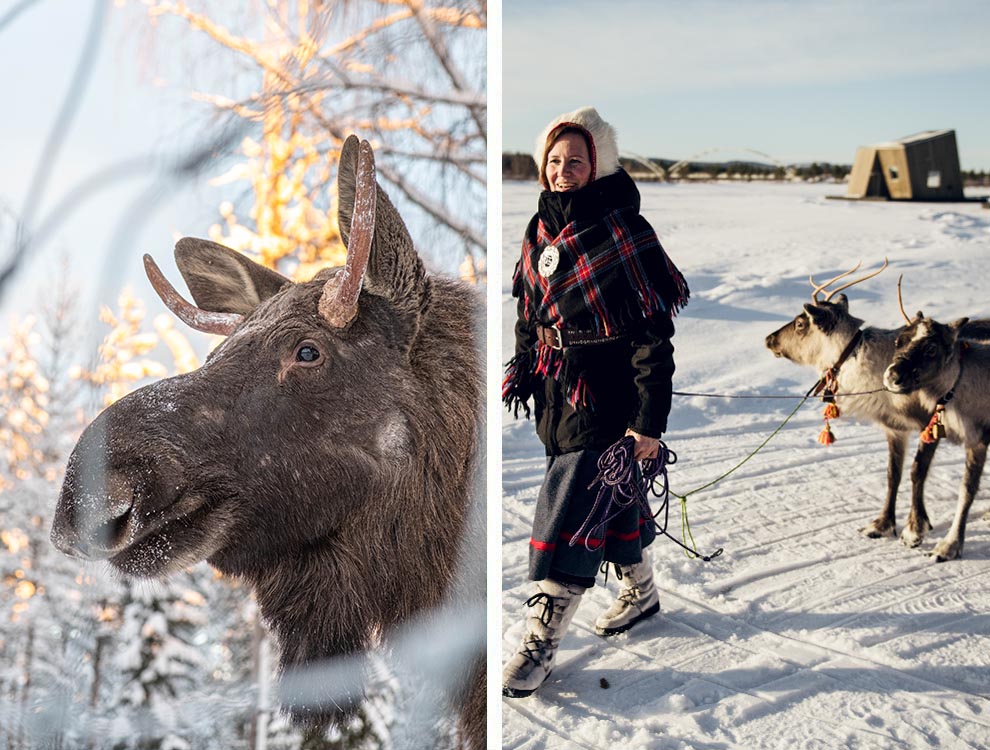 Immersing guests in the dream-like landscape of Swedish Lapland, Arctic Bath is made up of twelve sustainably constructed, glass-fronted lodges hovering above land and water inspired by the surrounding forest. The entire retreat is run on 100% renewable energy, and strives to spread the message of the indigenous Sámi people to take care of and live in harmony with the natural world. The hotel works closely with a network of Sámi guides, including Mikael “Micke” Suorra from experiential wildlife company Hide & See, a nature conservationist who offers moose safari sessions to Arctic Bath guests in the surrounding frost-crowned forests, and Anna Kuhumen, a reindeer herder at an Arctic Circle camp on the outskirts of Jokkmokk, who invites guests into her lávvu (tent house) to sit around the fireplace and listen to stories and joik (traditional Sámi singing). Learn about the Arctic way of life as you feed the friendly reindeer and simply soak up the magic of Northern Europe’s last remaining wilderness.

5. Whale watch from your window at The Marine, South Africa Perched on a clifftop along the rugged Hermanus coast overlooking the picturesque Walker Bay, The Marine more than lives up to its nautical name with two refreshing saltwater swimming pools, and by offering some of the world’s finest land-based whale watching between June and November each year – often directly from the comfort of the sea view bedrooms. Though there are water-safaris and boat tours along the Overburg shore which will take tourists closer to these majestic mammals, as well as seals and dolphins, land-based whale watching is kinder to the marine life, generates next to no carbon footprint in comparison with motor boats, and can be just as thrilling. 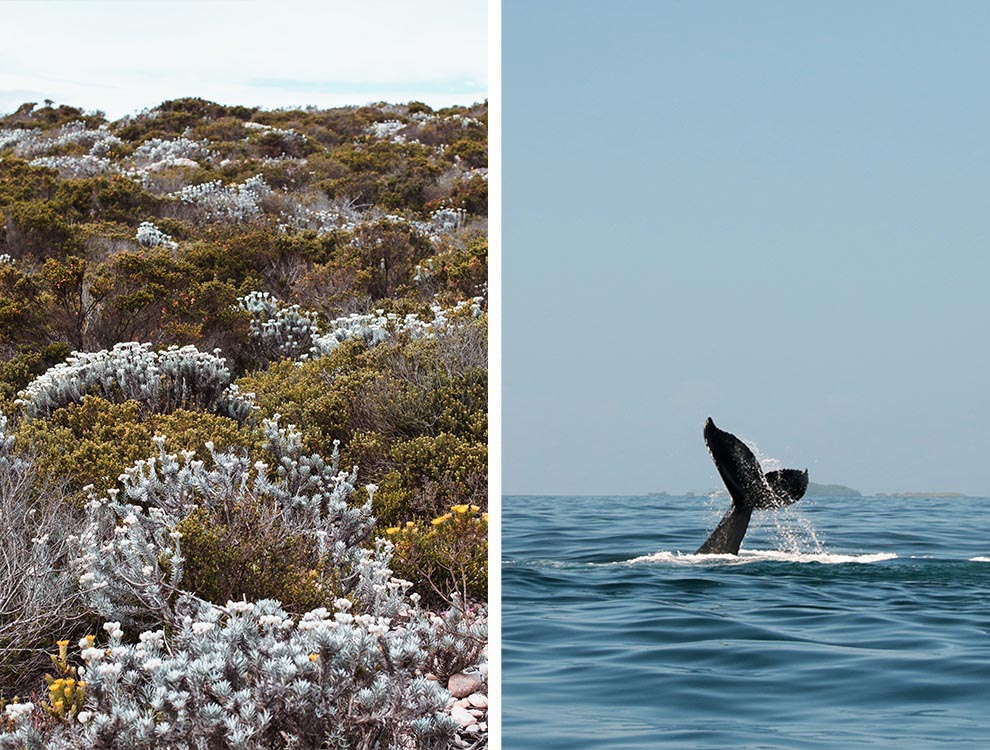 Just below The Marine is Hermanus’ iconic marine tidal pool, which offers fresh, bracing ocean water packed with micronutrients, as well as mesmerising views. Bring your binoculars and take a coastal dip – you might just spy the tail of a southern right whale, or an African penguin frolicking in the waves.

Top tip from SLH: Never expect a whale sighting, nor choose an operator who guarantees one. It’s a privilege, not a right to share in the joy and wonder of these sea creatures.

6. Release the turtles at The Fortress Resort & Spa, Sri Lanka With every room offering an awe-inspiring view of the Indian Ocean, the Fortress Hotel & Spa in Galle puts coastline protection front and centre of their agenda. The Considerate Collection resort is endorsed by Green Globe, an international sustainability standard, for its exceptional efforts in keeping its coastal environment pristine. But that’s not all. The hotel runs its own turtle conservation project to help protect the area’s endangered native sea turtles, with an on-site turtle hatchery to keep the eggs safe from both human and natural threats. Every year from October to April guests can take part in releasing the tiny hatchlings into the ocean – a truly once-in-a-lifetime experience in a very special place.

7. Take to the skies while supporting critically endangered birds at The George, New Zealand

An urban oasis overlooking the Avon River and Hagley Park, The George is an EnviroGold-rated property which continually thinks outside of the eco-box. Its latest environmentally-friendly initiative is a partnership with Christchurch Helicopters to sponsor Flight Path – a fundraising programme and experience that supports the critically-endangered orange-fronted kakariki karaka, a small, native parrot that lives ‘locally’ in the foothills and valleys of the Southern Alps and is New Zealand’s rarest forest bird. The venue is only accessible by helicopter and numbers of guests are limited to minimise forest intrusion and any negative impacts on the birds. 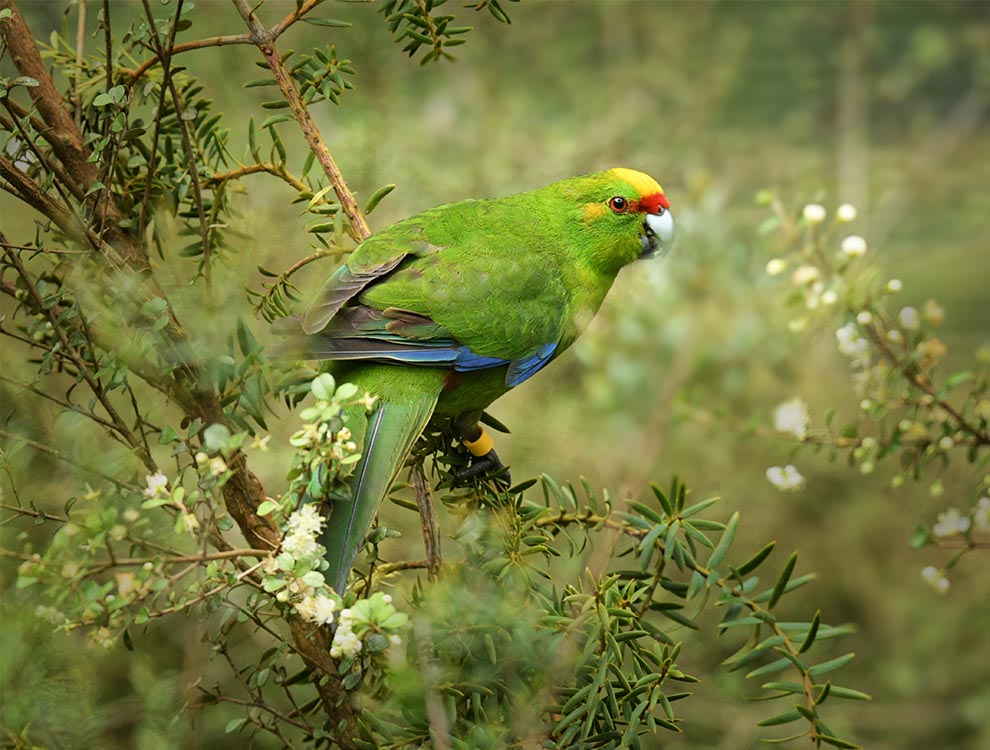 A percentage of every flight is donated to the parrot recovery programme, which helps fund intensified monitoring and research, increased genetics to encourage optimal pairings, and support purpose-built at-place breeding aviaries to reduce the stress on the birds who have to be translocated to breed. A handful of lucky guests can even experience the releasing of the birds back into the wild, set to a soundtrack of the New Zealand forest dawn chorus. 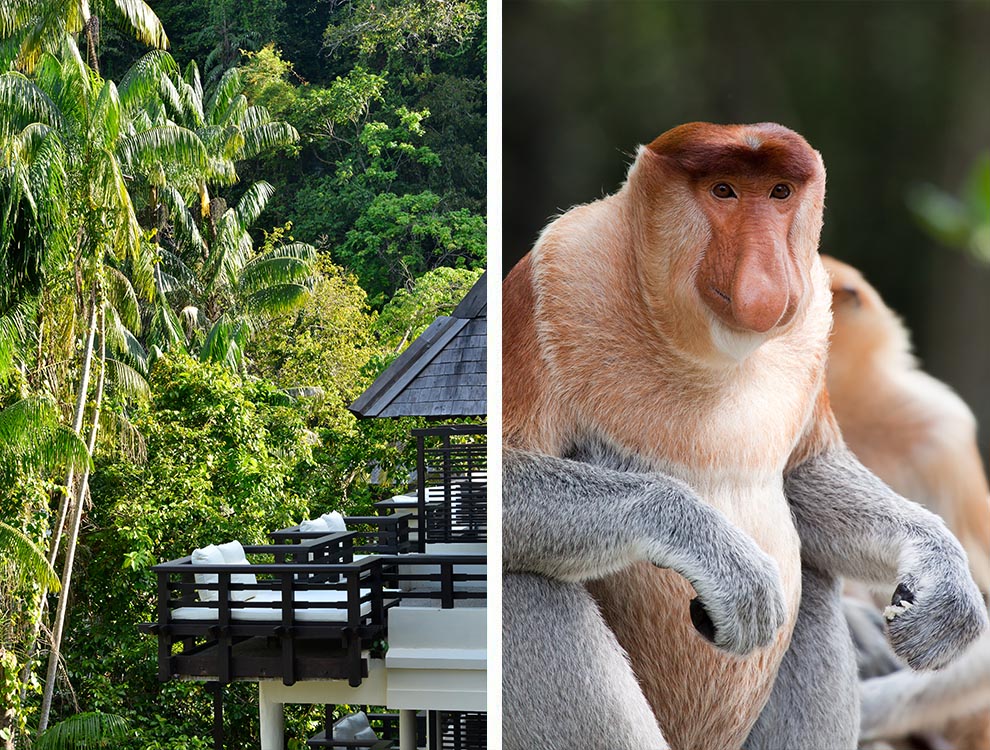 Fringed by a golden beach and backed by lush rainforest, Gaya Island Resort is an eco-conscious retreat set on an exotic island in the midst of the South China Sea. Just over 100 villas can be found tucked into the rainforest canopy, with a variety of views including mangrove, tropical rainforest and Mount Kinabalu in the distance. The resort’s resident naturalist takes guests on guided walks along the Proboscis Monkey Jungle Trail to the observation platform to try to catch sightings of these reddish-brown, long-nosed primates, that happen mostly between April to early July. 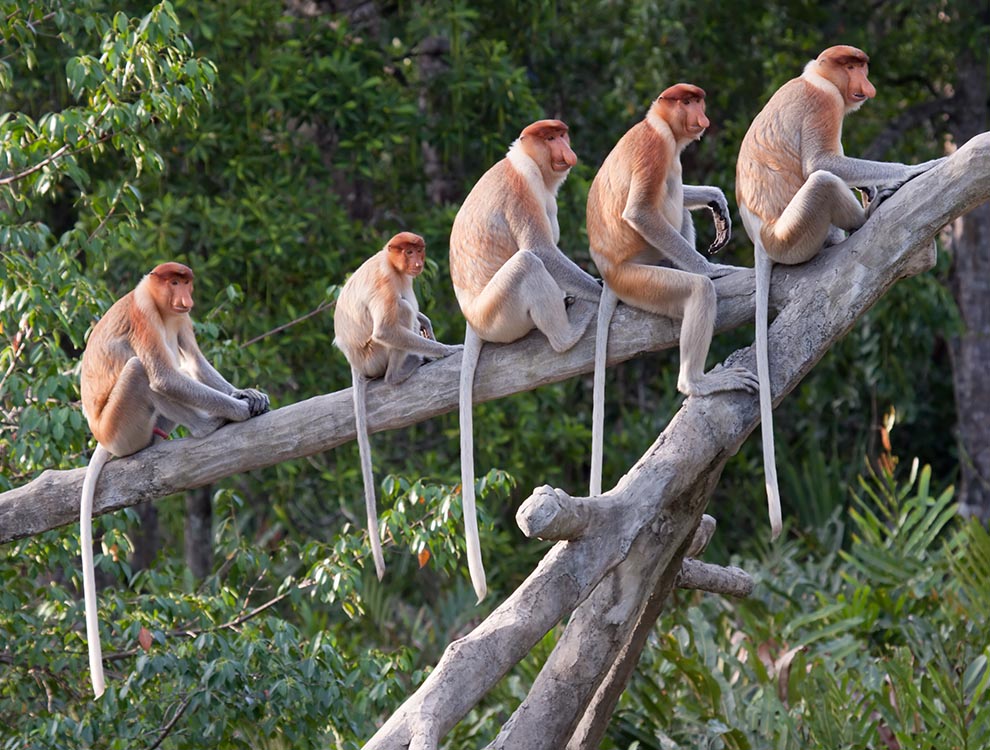 The resort also builds artificial nesting boxes for the Red Giant Flying Squirrels which can be spotted around the gardens in the evening, and installs them on trees within the resort’s grounds. You might also come across  Timmy and his family – the resident wildboars of Gaya Island Resort who visit the private beach of Tavajun Bay in the evenings. And if this wasn’t enough for you to give the resort a glowing review, a firefly habitat is currently being established in the island grounds for guests to experience fireflies at twilight on their doorstep in the near future. 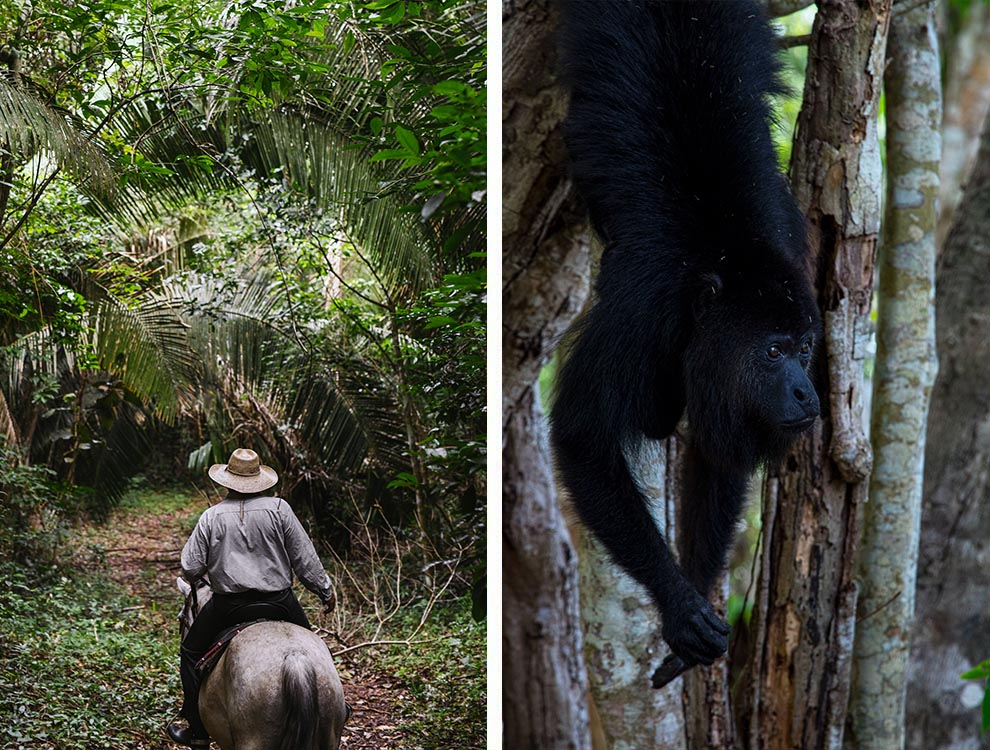 Wake to the sound of cascading waterfalls and tropical birds. Watch the sunset turn the skies crimson and gold over the mountains. The unspoilt natural beauty of Belize flows through GAÏA Riverlodge, a recharging retreat that blends effortlessly with its surroundings. Many of the tranquil and technology-free bedrooms, created in the style of rainforest cabanas, come with views (and sounds) of the falls – while others look across at the mountains. After enjoying a farm-to-fork dinner made using ingredients grown and harvested at the hotel’s Mayan organic garden, join one of GAÏA’s nationally certified guides on a walk through the tropical broad leaf forest to experience the sights and sounds of the rainforest inhabitants at night. From pygmy owls to basilisk lizards, you never know what you might see, (and there are plenty of unusual Belizean animals which you might never have heard of) which is all part of the fun! 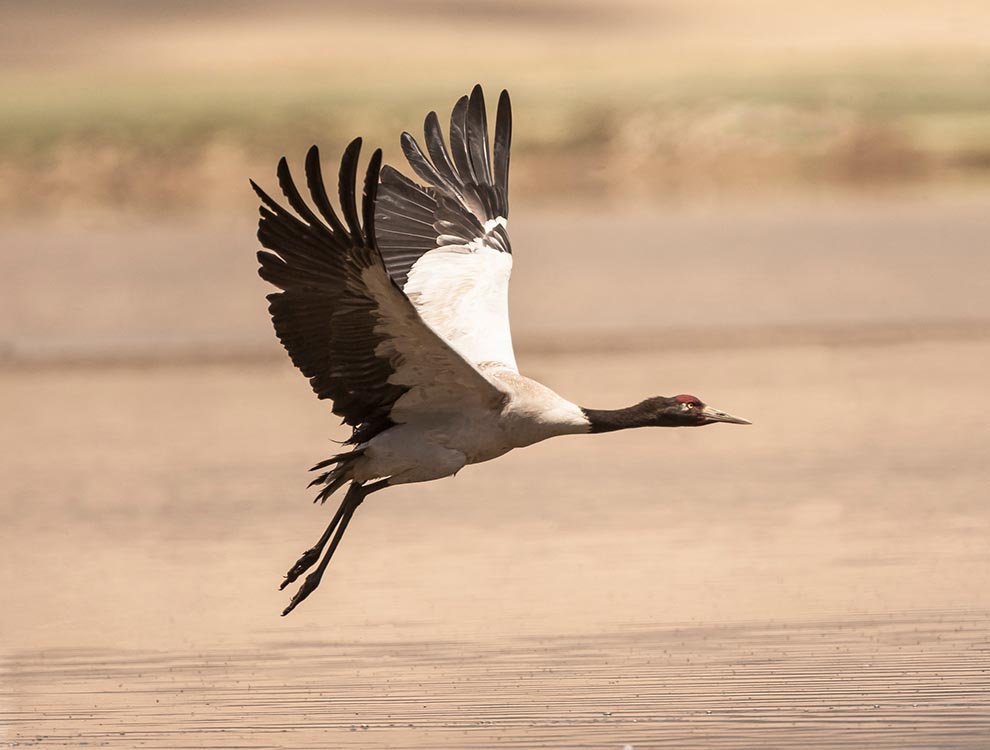 Hidden away in the Himalayas, Gangtey Lodge blends Bhutanese farmhouse living with down-to-earth luxury. Nestled in one of the last strongholds of the threatened black-necked crane, Gangtey Lodge and its local community are flocking together to help ensure that the cranes continue to return to Phobjikha Valley, where around 500 of the vulnerable species spend the winter. Gangtey Lodge regularly hosts educational evenings at the Black-necked Crane Centre, alongside leading an annual cleaning of the black-necked crane roosting grounds in the valley’s protected nature reserve. Revered as a symbol of longevity, these rare cranes are painted on the walls of temples throughout Bhutan, and form an integral part of life for the people who live here. Every November, local children, farmers, and monks celebrate the arrival of these beloved visitors, which then roost amid the farms and cottages of Phobjikha throughout the winter and have become the subject of Bhutanese folktales and songs. Since 1998, the Black-necked Crane Festival has drawn an increasing number of travellers to this remote valley each year, creating a valuable revenue stream for Bhutanese residents and the community working to protect and honour the world’s only alpine crane species.