If the pandemic pressed pause on your summer holidays, and you’re not planning to go into hibernation this winter, ski season might just be the most socially distanced of them all. Face coverings are the outfit du jour, the average length of a pair of poles is more than two metres, and with many resorts restricting the number of visitors and limiting lift passes, there’ll be plenty of space to enjoy to yourself on and off piste.

Rustic mountain lodges in picturesque, traditional villages set the scene for any Austrian adventure, but the hills truly come alive when sprinkled with snow. Significant investment in lift systems means less time spent queuing and more time on the slopes. Don’t be put off by Austria’s low-altitude reputation – sophisticated snowmaking machines can be found in most resorts, while its pastureland is mostly still skiable in low snow fall compared with mountainous heavy weights such as France and Switzerland. Here are the best boutique places to warm up after hitting the slopes with some Schnapps, strudel, or schnitzel… 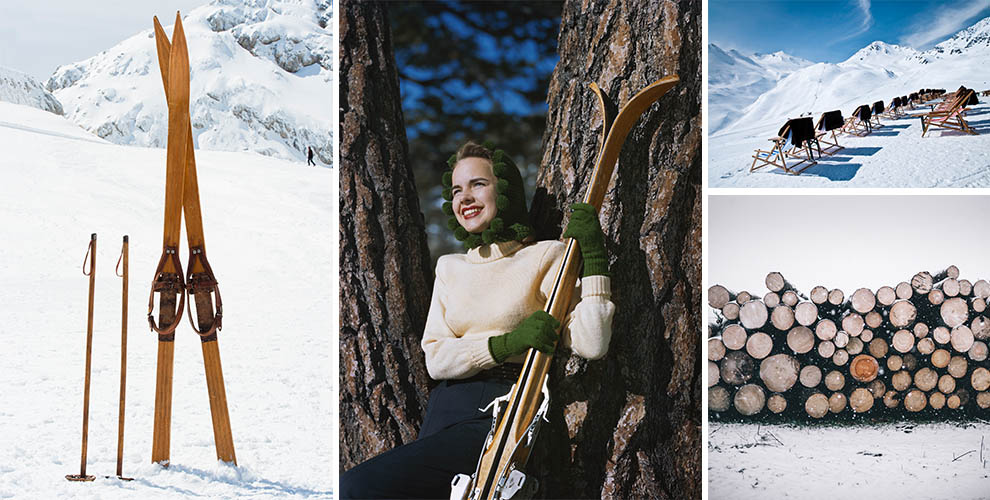 Art & Relax Hotel Bergwelt, Obergurgl…set on a sunny plateau with the highest pool in the Alps, this chic chalet retreat takes high altitude luxury to the next level.

DasPosthotel, Zell am Ziller…an eco-conscious lodge with a solar-heated swimming pool, DasPosthotel stays green (on the inside) all year round.

Grossarler Hof, Grossarl…nestled in one of Austria’s most beautiful mountain valleys, you will have powdery pistes a plenty to choose from. Stop off at a cosy mountain hut along the Salzburger Almenweg and relax with a hot Gluehwein drink. 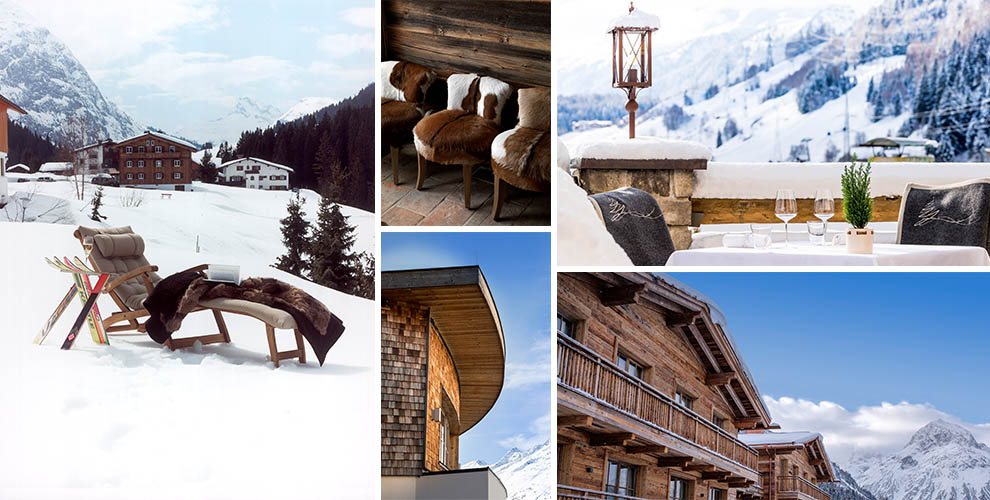 Hotel Tannenhof, St Anton am Arlberg…originally built in the 1920s, this glamorous local landmark was rebuilt piece-by-piece in 2011 and restored to its former glory. Located in the sunniest spot in St Anton, known as the ‘cradle of Alpine skiing’, follow in the footsteps of the social elite at this timeless Tyrolean retreat.

Kristiania Lech, Lech am Arlberg…offering a personal ski guide to show you the best ski pistes and routes in the Arlberg, this homely hideaway takes service to new heights.

Severin’s – The Alpine Retreat, Lech am Arlberg…just a short ski-lift ride away from the world-class pistes of Lech and St Anton, this contemporary chalet also comes with state-of-the-art in-suite technology to make the most of down time as well as your slope sessions.

Home to the best variety of ski resorts in the world, there is something for everyone and every level in France. From the glitz and glamour of Courchevel 1850, Val Thorens, and Méribel in Les Trois Vallées to the quieter, tree-lined slopes of Megève in the foothills of Mont Blanc, you’ll also be perfectly placed to enjoy some of the most legendary après ski spots in the Alps – where the days of shotskis in swanky clubs might now be better enjoyed sipping mulled wine slopeside. Be sure to pack your most stylish pair of salopettes for these chic retreats… 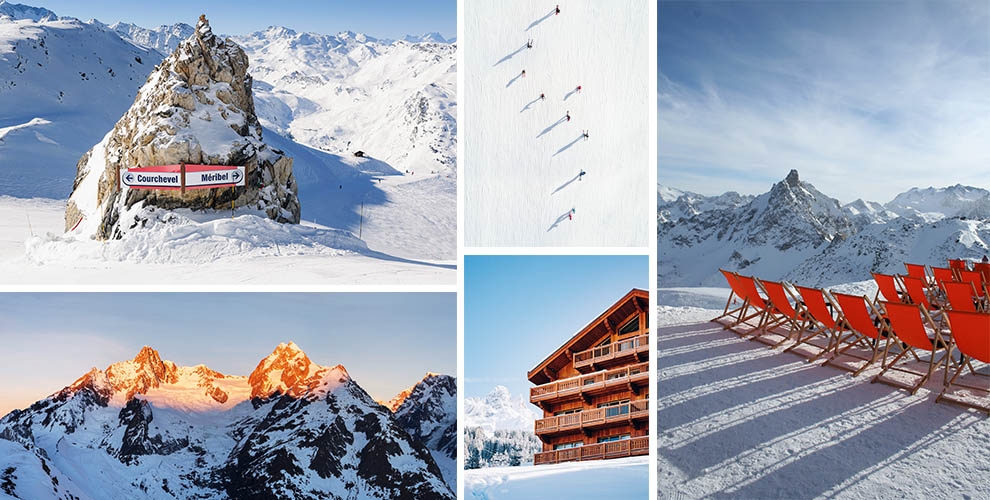 Hôtel Le Strato, Courchevel 1850…set in an enviable ski-in ski-out position, this glamorous refuge sits at the foot of the Cospillot piste and is only five minutes from La Croisette.

Hôtel Pashmina Le Refuge, Val Thorens…at 2,300+ metres, you’ll have panoramic views over the Tarentaise Valley, along with an onsite Goitschel shop for all your snowsport needs.

Le Coucou, Méribel…spanning ten floors built into the mountainside, this ski-in, ski-out lodge continually brings the outside in. Pierre Yovanovitch’s chic interiors run from the rooms to the restaurants – Beefbar has a terrace you can ski straight onto for lunch on the mountains. 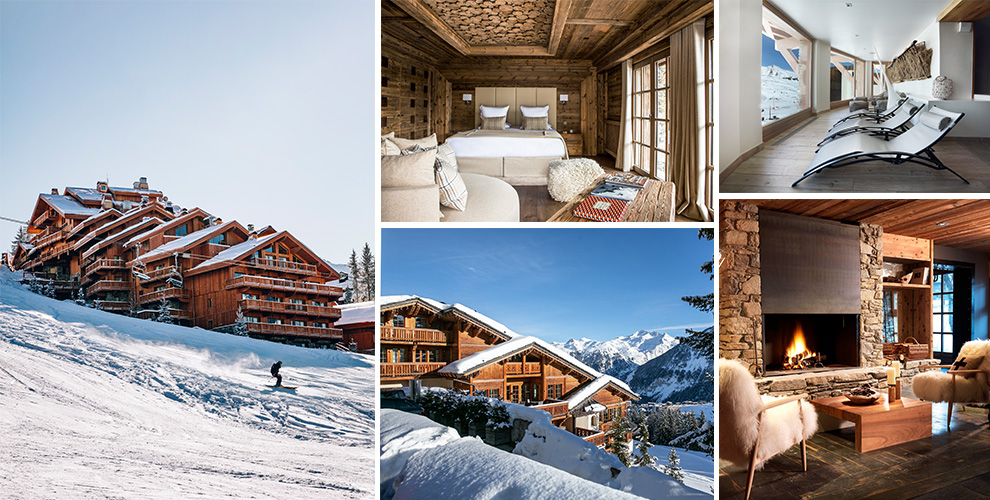 It has been over a decade since the Dolomites were declared a UNESCO World Heritage Site, famed for their picturesque scenery of frozen lakes and dusky pink sunsets over the snow-capped peaks. Home to double-diamond runs and Cortina d’Ampezzo, one of the most glamorous ski resort high streets in the Alps, snow-seekers will find something for the most skilled and the most stylish. Head for the famous Sella Ronda, a one-of-a-kind 40km route which loops around four Dolomite passes of the Sella massif, including the awe-inspiring Val Gardena. 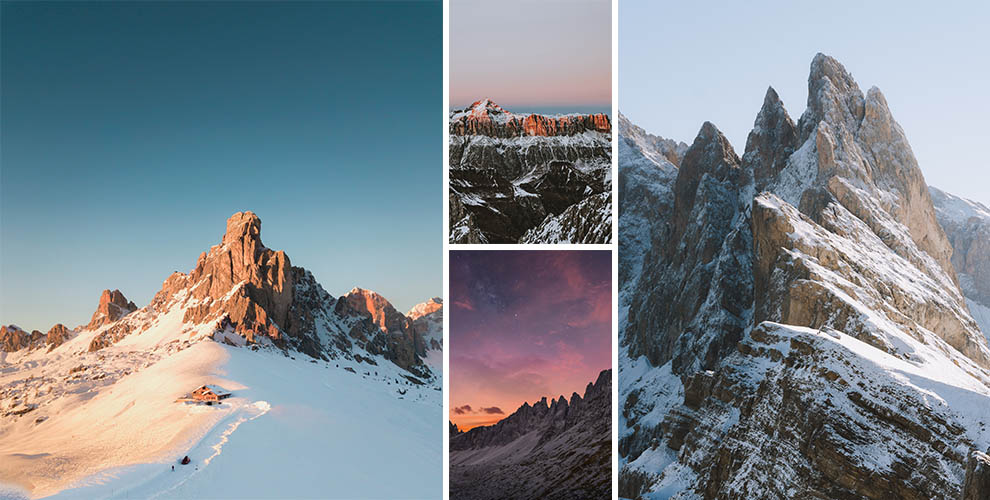 Forestis, Brixen…a summit-level sanctuary which is deeply connected to its South Tyrolean mountainscape, this serene spa hotel is perfectly poised for ski-in ski-out as much as it is for post-piste relaxation.

Rosapetra Spa Resort, Cortina d’Ampezzo…placing a strong emphasis on wellbeing, this relaxing retreat is the ideal place for ski-weary legs to rest and recover.

Hotel Montchalet, Ortisei…sleigh rides, snowshoe walks and, of course, skiing, this modern mountain lodge is a winter playground with personal saunas to warm up in after a day in the snow. 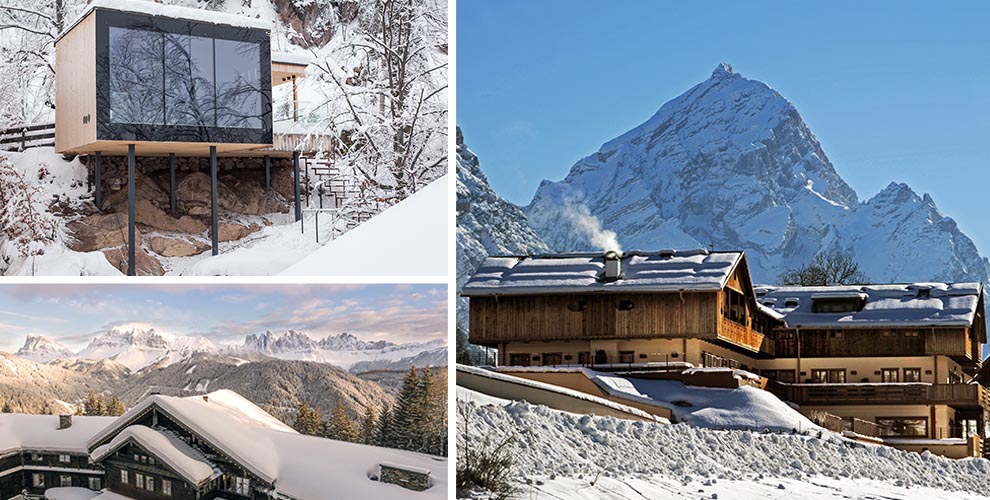 Miramonti Boutique Hotel, Merano…overlooking the spa town of Merano, you’ll be perfectly placed to discover the relaxing thermal baths. And with snowy slopes all around, this is sublime ski country.

Alpin Royal Wellness Refugium, St Johann…set in breathtaking mountain scenery of the Ahrntal in South Tyrol, an impressive array of winter activities are on your doorstep – from skiing and snowboarding to ice climbing and sleigh rides.

Goldene Rose Karthaus, Schnals…tucked away on the Italian-Austrian border in the Senales Valley, where the glacier became the film set for Everest, this elemental retreat is set to a backdrop of 40km of slopes, 17 lifts and an expert snowsports school.

Arguably the birthplace of skiing, where the sport developed in the 19th century, Switzerland is the original world of winter glitz. From the wide open slopes above the tree line in St Moritz and the trendy après scene in Verbier to its traffic-free traditional mountain villages, the Swiss are hard to beat when it comes to winter getaways. And with the country’s first fully automated gondola opening this December, snow seekers will now be transported from Tufternkehr via an intermediate station in the Wyss Gufer to the Unterrothorn. The Kumme will be the first gondola in Switzerland that can be operated without staff — perfect for a ski season where person-to-person contact needs to be limited. Just be sure to leave some room for melted raclette and potato rösti after carving up the piste… 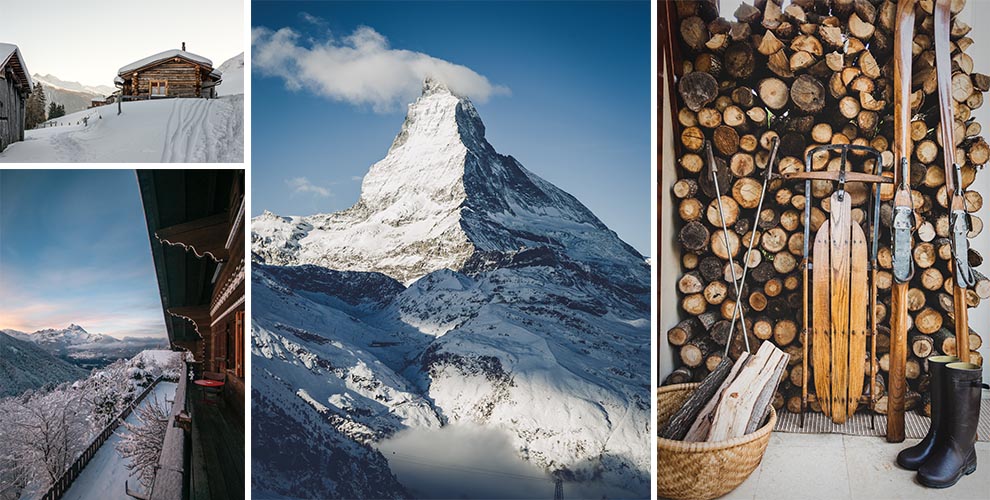 Cordée des Alpes Hotel, Verbier…with over 410 kilometres of groomed ski runs and 90 lifts across the four valleys of Verbier, there is serious skiing on hand at this impressive wooden ski lodge, with beautiful aged wooden floors and timber balconies.

Crans Ambassador, Crans-Montana…pick up snow-sport supplies at the on-site ski shop and stroll to the nearby lift at this wellness-focused retreat, complete with its own Performance Lab where you can pick up tips on improving your form.

Le Grand Bellevue, Gstaad…enjoying a central location on Gstaad Promenade, this early 20th-century grand dame benefits from all the local amenities of Gstaad town. With a Michelin-starred restaurant, Art Deco bar, and 3,000 square-metre spa, there are plenty of reasons to stay inside as much as enjoy the great outdoors. 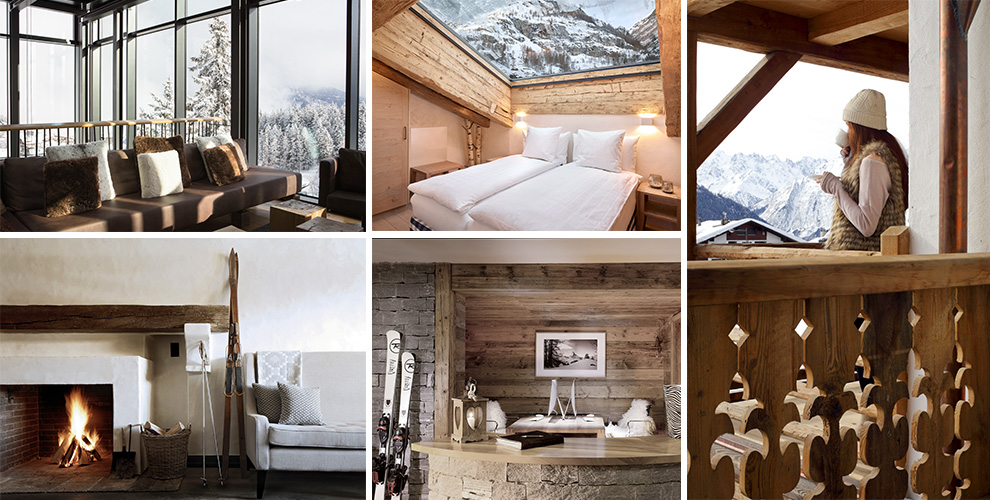 The Crystal Hotel, St Moritz…located in one of Switzerland’s most glamorous ski resorts, intermediate skiers will find 56 miles of Corviglia skiing just above town, while more advanced powder-seekers can take the cable car to Piz Nair.

Hotel Firefly, Zermatt…surrounded by the soaring peaks of the Valais Alps and the iconic Matterhorn (you know, the mountain on the Toblerone bar), this stylish lodge boasts a sleek, glass-and-steel-roofed spa with contemporary interiors to boot.

Hotel Schweizerhof, Zermatt…an authentic Swiss chalet at the foot of the Matterhorn, Hotel Schweizerhof is a true winter wonderland – with an in-house ski expert and all manner of modern sports gear to hire.

Bergwelt Grindelwald – Alpine Design Resort, Grindelwald…this sleek mountain retreat puts modern day explorers in peak position for high-Alpine skiing and snowboarding at the foot of the Eiger, while Jungfrau, one of the world’s most iconic ski regions, is just a few schusses away.

Go off piste…Spain, Greece, and Norway

Look beyond the Alps to some of Europe’s lesser known ski resorts, including Spain’s Sierra Nevada (which translates as ‘snowy range’), Greece’s Metsovo, and Norway‘s fjordscape. If you’re searching for a slice of wilderness, these off-the-beaten-track destinations should be top of any adventurer’s winter wish list… 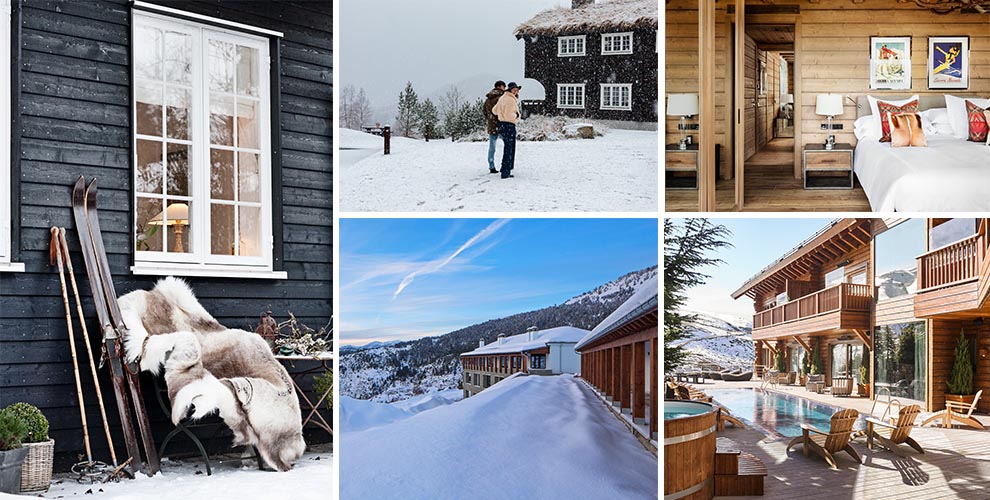 Grand Forest Metsovo, Metsovo…one of northern Greece’s best-kept secrets, this boutique hotel is your gateway to an area of Greece known and loved by a privileged few.

Storfjord Hotel, Skodje…step into a Scandinavian folk tale at this fjord-fringed woodland cabin, set on the crest of a hill with the Sunmøre Alps as its backdrop.