A seven-day cross-country itinerary through the land of lochs, castles, and tartan

Scotland has all the essential ingredients for the perfect road trip – spellbinding scenery in all seasons, from heather-dotted coastlines to rugged Highland wilderness, picturesque villages stocked with the finest shortbread and whiskey in the UK, and hilltop castles with as much history to take in as bonnie views. This itinerary offers a taste of everything from some of the best luxury hotels in Scotland, all ready to be booked with a call to our Travel Advisors. 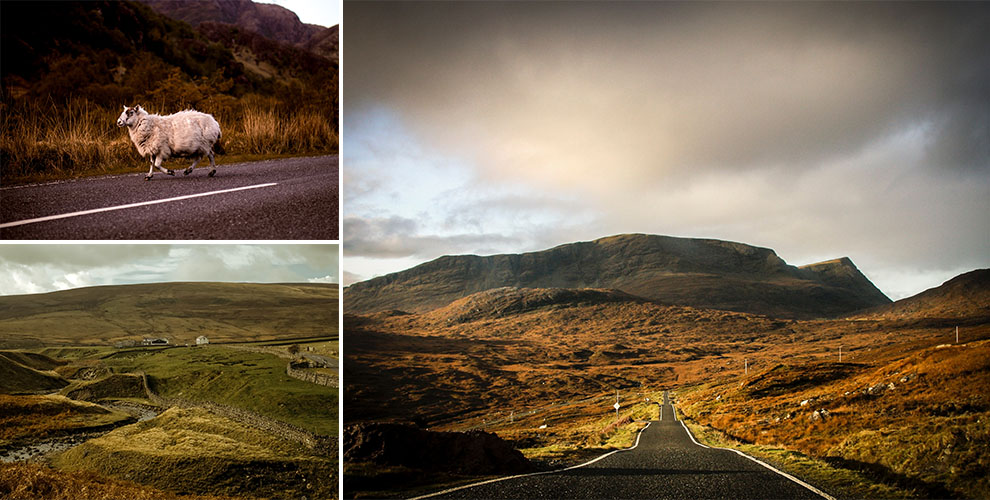 Sitting pretty, yet hilly, between rolling countryside and a windswept, sandy seaside, Edinburgh offers the best of both worlds with its Medieval Old Town and elegant Georgian New Town, interspersed with well-kept gardens and varied architecture. Among the cobbled streets and Gothic buildings, you will find more restaurants per head than any other city in the UK, a trendy underground selection of speakeasies, gin distilleries, and whiskey bars, along with the country’s best vintage shopping scene.

Wander along the Royal Mile or the colourful Grassmarket shops to pick up some Scottish souvenirs, before heading up to the Castle for an insight into the vibrant history of this military fortress, and the city’s best-known landmark. Make time for a stroll down to Dean Village, a photogenic patchwork of 19th-century buildings and bridges set along the Water of Leith, just five minutes’ walk from Princes Street. If you’re lucky with the weather, take a trip to Portobello Beach, a charming stretch of seaside only a few miles from the city centre. Don’t miss out on the weekly Sunday farmers’ market in Stockbridge, a vibrant area of the city with a village vibe, and a local hotspot for organic delis and stylish gastropubs. 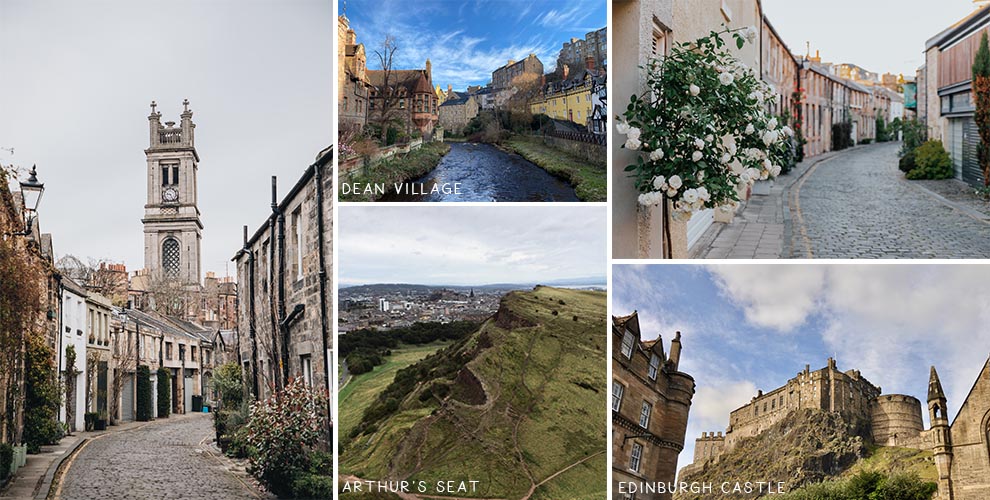 For the best views over Edinburgh, the peak of Arthur’s Seat is well worth the hike – be sure to wrap up warm and bring some baked goods from one of the city’s many independent cafés with you to enjoy while you watch the sun set over the iconic sky line.

Visitors to the capital in August will be at the heart of the annual Fringe Festival, a world celebration of art, culture, and theatre – while the famed Christmas markets take up the majority of Princes Street Gardens during the winter months with endless stalls selling hot chocolate, gingerbread, and artisan gifts.

A quirky blend of architectural grandeur and modern interior design, Nira Caledonia is made up of two magnificent Georgian townhouses superbly placed to explore the sandstone façades and high-end boutiques of New Town. Book a table for dinner at the hotel’s restaurant, Blackwood’s Bar & Grill, for locally sourced produce and an impressive selection of single malt whiskey. Suggested stay 2 nights. 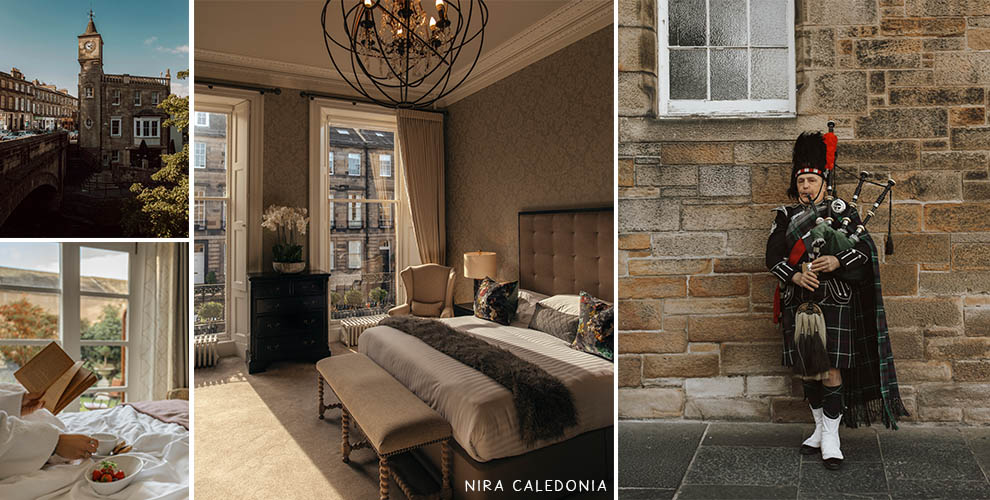 Just a caber’s toss from the country’s capital, the coastal town of Gullane is the perfect introduction to rural Scotland. With views over the Firth of Forth and historical architecture to rival the beaches, this corner of Scotland is full of undiscovered gems. The 40-minute drive along the northeast coast brings you to Yellowcraig Beach – home to rockpools, sand dunes and spectacular views. From here you can look out to Fidra, the 25-acre islet that inspired Robert Louis Stevenson’s Treasure Island. It’s now the site of an RSPB nature reserve, offering birdwatching tours to see puffins, guillemots and razorbills flitting over the rocks. Fidra Lighthouse, built in 1885, also sits on the island, alongside the ruins of a 12th-century chapel. 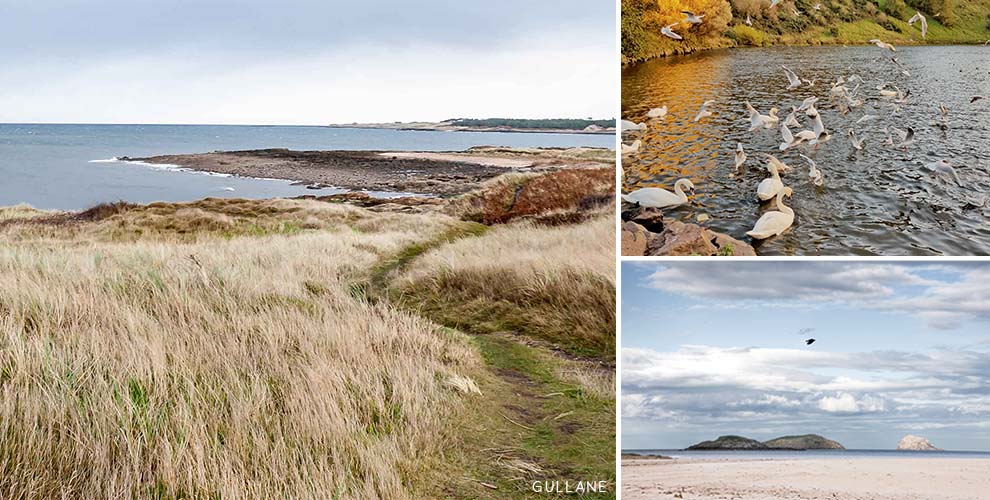 SETTLE IN FOR THE NIGHT…

Set in the stunning East Lothian countryside, Greywalls Hotel and Chez Roux is a classically designed Edwardian country house, in keeping with its tranquil surroundings. This golfer’s paradise overlooks the 9th and 18th holes of world famous Muirfield golf course, for those looking to get to grips with the Scottish golfing scene – this is the place. Foodies will also find Michelin-starred chef Albert Roux’s name on the in-house restaurant, alongside a dedicated whisky room. Suggested stay 1 night. 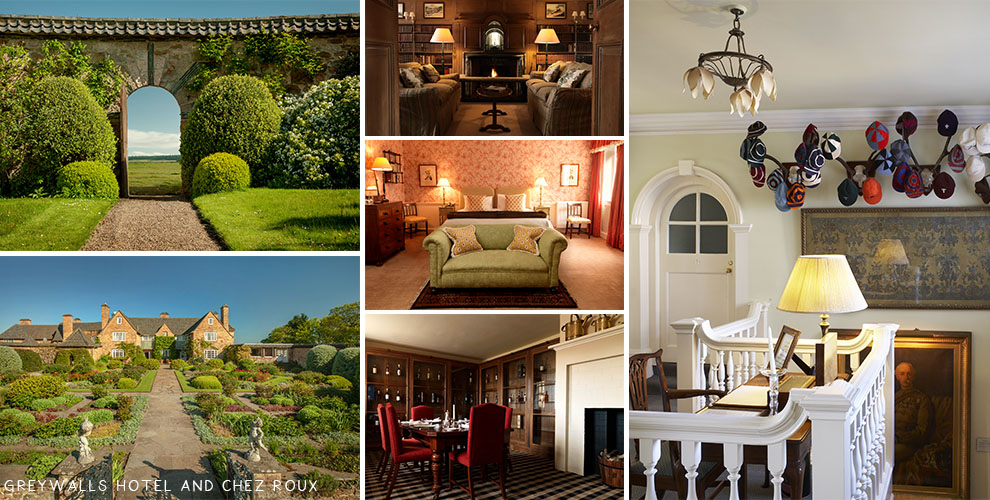 Heading back along the coast past Edinburgh before travelling cross-country to just south of Glasgow, the hour-and-a-half drive from Gullane to High Blantyre will skim the Pentland Hills Regional Park, the perfect spot for a picnic to break up the journey. High Blantyre puts historical relics, iconic golf courses and some of Scotland’s most dramatic scenery at your feet. If you’ve a cultural getaway in mind, Glasgow city is just 15 minutes away. A hub for museums, architecture and boutiques, there is a welcoming hustle and bustle around the clock.

There’s a story behind every staircase and soaring turret of Crossbasket Castle. From its 15th-century Robert the Bruce roots to coveted contemporary status, this clotted cream-coloured castle is a landmark Scottish retreat. As you admire the views, indulge in a delicious afternoon tea or sample some of the smooth whisky selection. Just leave room for dinner, courtesy of the Roux family. Suggested stay 1 night. 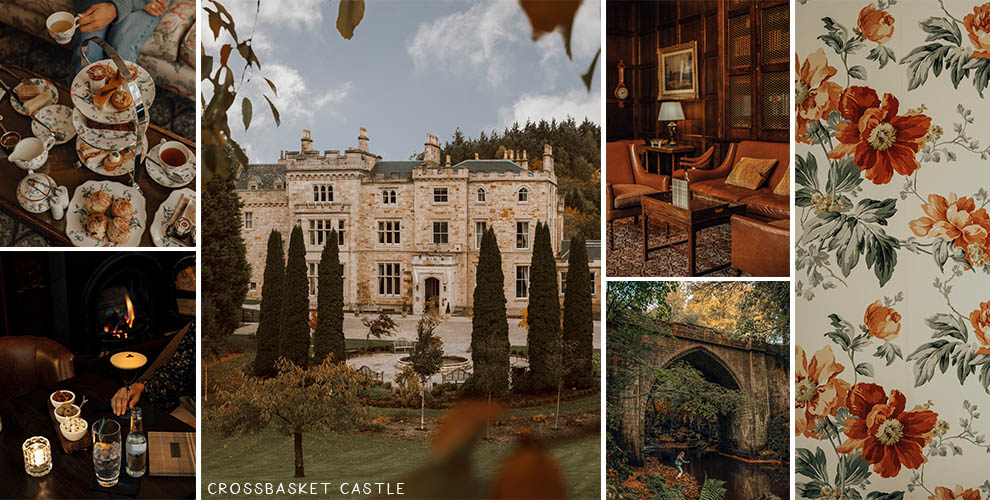 After a 45-minute drive north you will see Stirling Castle sitting atop its craggy rock come into view, close to the heritage site of the 13th-century Battle of Stirling Bridge, where William Wallace defeated the English. Named after great Scots from the past and present, the rooms at Cromlix have beautiful country views of the 34 acres of woodland and gardens surrounding this grey-stone Victorian mansion. Tennis fans will feel in good company at Cromlix, which is now owned by the British multiple Grand Slam title winner and Olympic tennis champion, Andy Murray. Suggested stay 1 night. 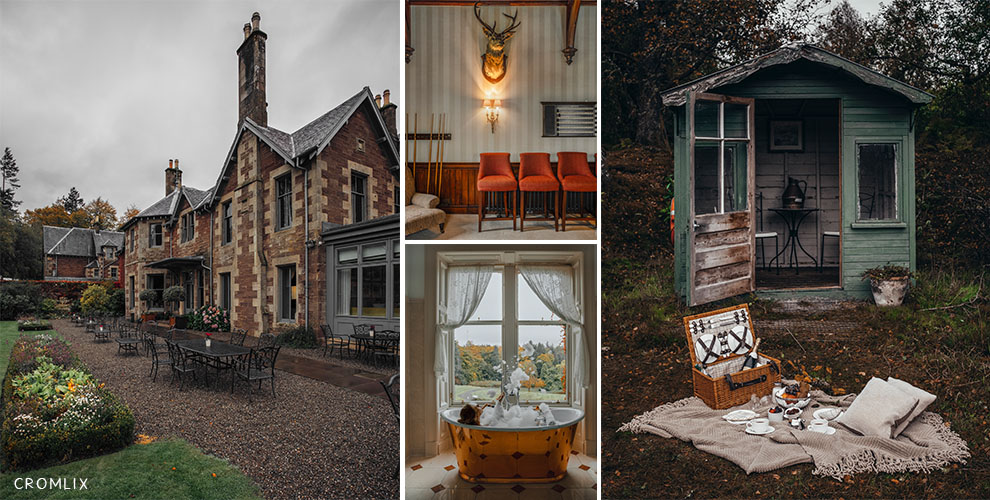 LAST BUT NOT LEAST: FORT WILLIAM

The two-and-a-half hour drive up to Fort William is well worth every minute, with plenty of picturesque stop-off points along The Trossachs National Park, Loch Lomond, and Glencoe. Film lovers will stumble upon the iconic set locations of James Bond’s Skyfall and several Harry Potter movies as you travel further up north, before you reach your final destination – with its shoreside setting on Loch Linnhe and fresh air focus, Fort William frames some of Scotland’s most impressive scenery. Situated just below Ben Nevis, hiking trails from Fort William are never in short supply. Explore the Highland wilderness along the Great Glen Way or stay closer to home and discover the natural beauty on Fort William’s doorstep. 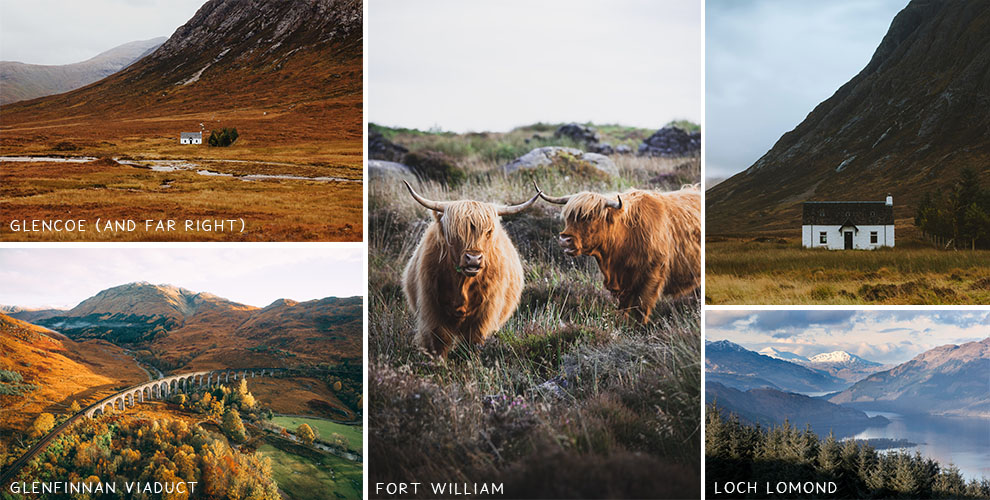 With a backdrop of Ben Nevis, the highest mountain in the UK, the views from Inverlochy Castle are second to none. Its picture-perfect setting, three miles from Fort William town, makes Inverlochy Castle a Scottish masterpiece of 19th century baronial splendour. From the dovegrey stone walls and romantic turrets, through to the sumptuously furnished rooms. If you’re here during winter, why not try some snow sports on Aonach Mor, with the Nevis Range right on the doorstep. Suggested stay 2-3 nights. 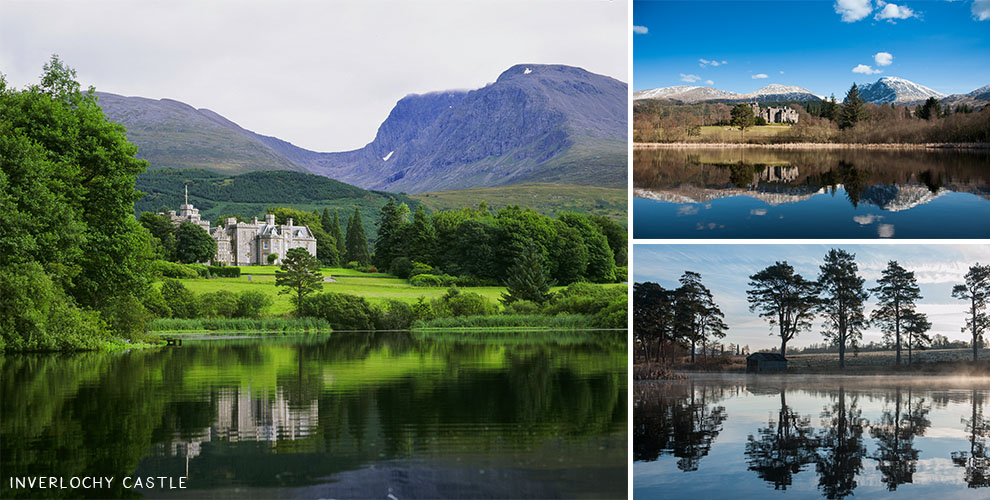 Seeing the most of Scotland is best done driving, which makes a car the essential method of transport. If you’re in need of a rental or transport between hotels, as always, ask our Voice Reservation Team for further details. The saying goes in Scotland, “there’s no such thing as bad weather – only the wrong clothes.” Pack your walking boots and plenty of layers to make the most of the country’s dramatic landscapes – come rain or shine.