5 of the coolest December hotspots

From the Northern Lights to the Middle East

Switch the out-of-office on early with these December getaways. Whether it’s an alternative Christmas market, winter-friendly city break or frozen waterfall that would give Arendelle a run for its money, here are five breaks from the norm. 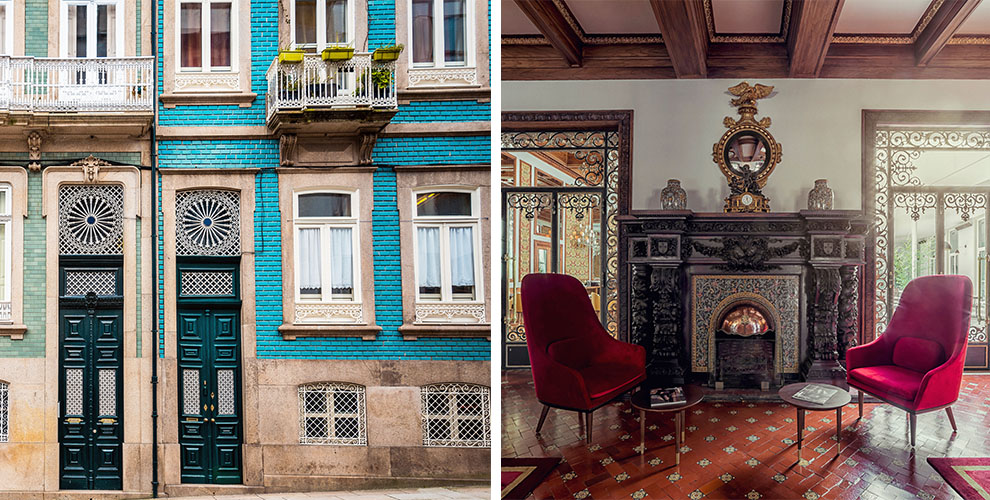 While temperatures plummet in many European cities, winter sees Porto take on a gentler chill. Once seen as Portugal’s under-the-radar ‘second city’, this River Douro darling has been quietly drawing the in-crowd with its mix of medieval charm and modern appeal.

December is the ideal month for exploring its colourful jumble of streets, eating the local spin on bacalhau (traditionally cooked on Christmas Eve) and, of course, stepping into one of the city’s many port cellars. When in Porto… 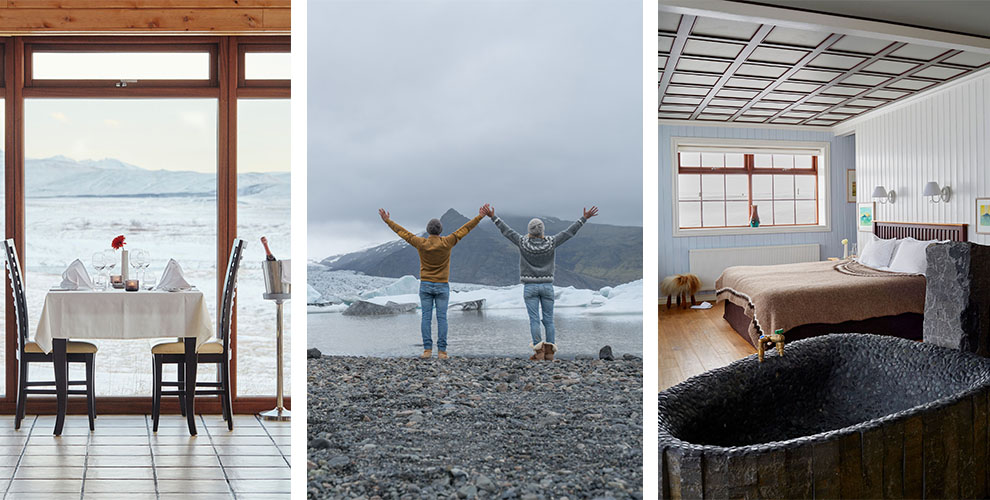 Frozen waterfalls, thundering geysers and walking in the snow boot-steps of Vikings. Iceland is the ultimate fire and ice getaway. Its epic landscapes are transformed into a dramatic monochrome palette as snow coats the black hills in December.

A few hours of sunlight each day makes it even more thrilling to explore – whether you go snowmobiling across a glacier as the sun sets in the afternoon, or hot-tub hopping in boutique retreats like Hotel Rangá. At night, all hopeful eyes turn upwards to see the aurora borealis – or Northern Lights. They’re as elusive as they are enchanting, so book a stay at a hotel which offers a winter-time wake-up service for the best chance of catching them when the skies are clear and crisp.

With log cabin warmth, hot tubs in the snow and connections to all sorts of glacier adventures, Hotel Rangá is hard to beat. 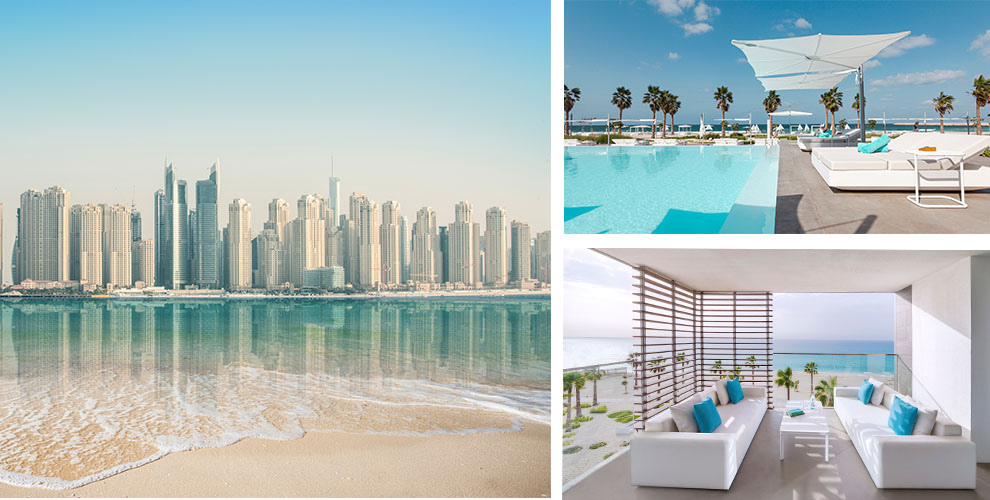 Swap ski gear for swimwear in Dubai, as temperatures in December make it a beach-friendly winter getaway. The Pearl Jumeirah sands are pristine, making the most challenging part of the day a swim up to the bar to order a cocktail. And with designer boutiques and the glamour of the Dubai Mall here too, it’s the ideal place to start (and finish) all that Christmas shopping.

Combine beachside bliss with the bright-lights-big-city experience at Nikki Beach.

4. For peak Christmas market perfection… Switzerland and the Netherlands 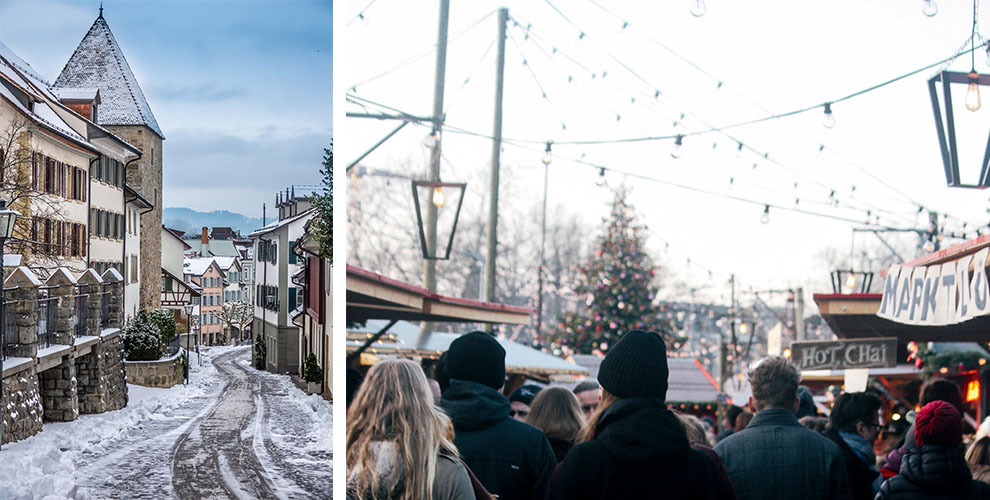 After your second Glühwein, wooden Nutcracker and dried fruit wreath, one Christmas market can look much like another. And while there’s a reason people flock to Bath, Salzburg and Vienna in December, these magical settings can become very crowded. But there is an alternative – if you know where to look.

In Switzerland, you climb a mountain to 2,132 metres above sea level to get your festive shopping fix. The Mount Pilatus Christmas Market is open for just one week a year and while it’s technically held in November, the Alpine backdrop lends it an awe-inspiring seasonal setting. The cogwheel railway you’ll use to ascend the slopes makes it even more magical.

For those without a head for heights, go underground instead. The ‘Velvet Caves’ in the Netherlands is a storybook mix of culture and crafts – where you can browse a wonderland of trinkets and treats, as well as explore an 18th-century church, frescoes and artworks. Remember to wrap up warm… it gets cold underground.

Stay at Winselerhof Country Estate in Landgraaf for a day trip to the caves, and central Switzerland for the mountains.

5. For fjords (and Frozen fans)… Norway 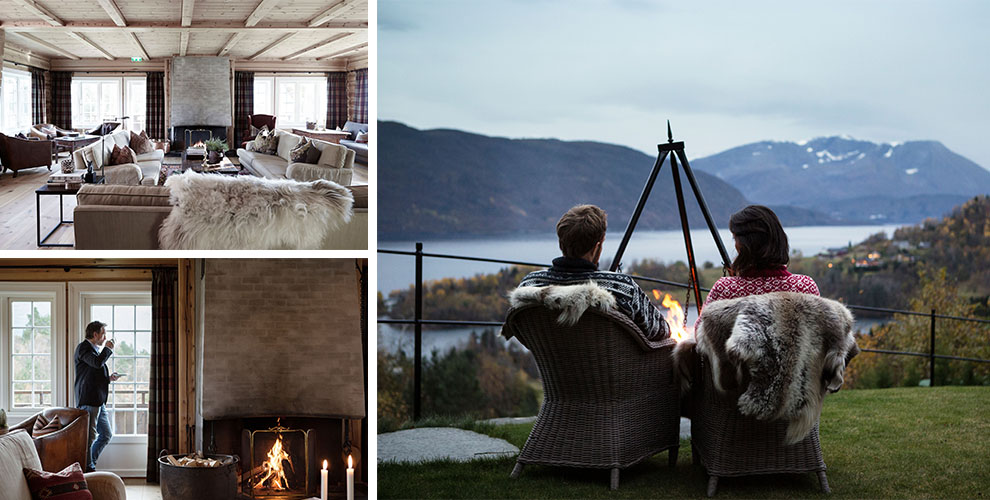 Pack your thickest fleeces and thermal layers and embark on an unforgettable adventure in family-friendly Norway. Grown-ups will love its cosmopolitan cities and boutique hotels, while little ones will be enchanted by the scenery that inspired Disney’s Frozen.

A wander around the wharf in beautiful Bergen will transport movie fans back to the opening scenes of the first Frozen film. Afterwards, if the weather plays ball, take the charming Fløibanen funicular railway up to the ‘troll forest’ to immerse yourselves in Norwegian folklore. And check underneath the rocks for those “fixer uppers”. When it comes to snowy vistas, nothing quite compares to the northern landscapes.

Opt for Scandi-chic style at Storfjord Hotel to be in the thick of fjordland, or base yourself in Bergen at Opus XVI.