10 of the world’s best boutique hotels with history

Ever wondered what lies within the walls of your favourite boutique hotels? If you’re on the hunt for heritage, take a walk down memory lane with the stories behind our top picks for time travellers.

Tucked away in a quiet, little street in the heart of Milan’s fashion and design district, Hotel Magna Pars Suites Milano is a stylish all-suite, family-owned hotel. Housed in a former perfume factory, it has been transformed into a modern architectural gem. Each of the 39 suites takes its identity from perfume essences of flowers and woods with colours, scents and amenities to match. The hotel has recently launched a perfume laboratory on site, LabSolue, housing artefacts from the former perfumery, a library filled with old books on the art of perfumery and guests can even purchase exclusive customised fragrances. 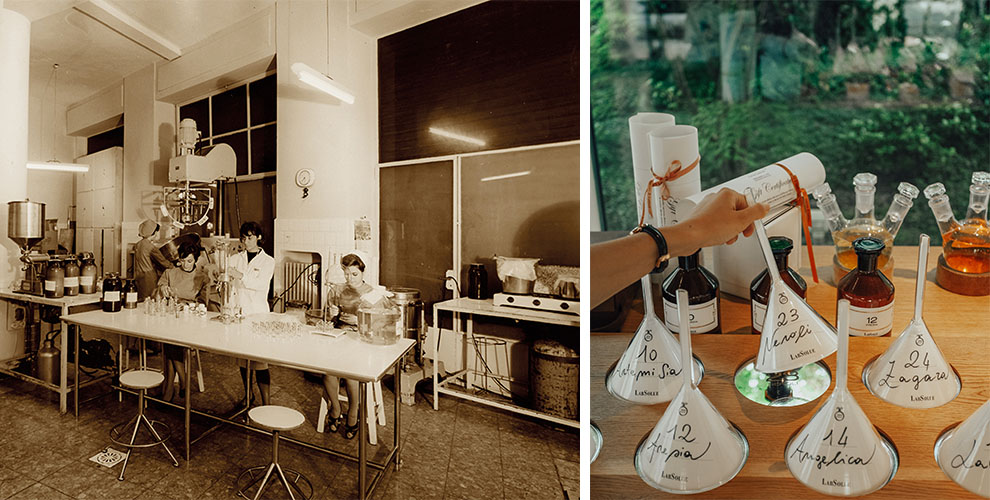 The Tokyo Station Hotel, housed in the station’s 105-year-old Marunouchi Building, blends Omotenashi (the time-honoured spirit of Japanese hospitality) with 21st century luxury. Vaulted ceilings, cut-glass chandeliers, polished floors and preserved period features. The high-ceilinged lobby lounge once served as the first-class waiting lounge whilst the original 330m-long corridor still remains leading to the rooms. This 150-room hotel survived both World War Two and the Great Kanto Earthquake of 1923. The Dome Side rooms face into the historic train station, with views of the station’s ornate European-style domes. The hotel’s other rooms overlook either the train tracks or the Imperial Palace. Although in one of the world’s busiest stations, you never actually hear a train! 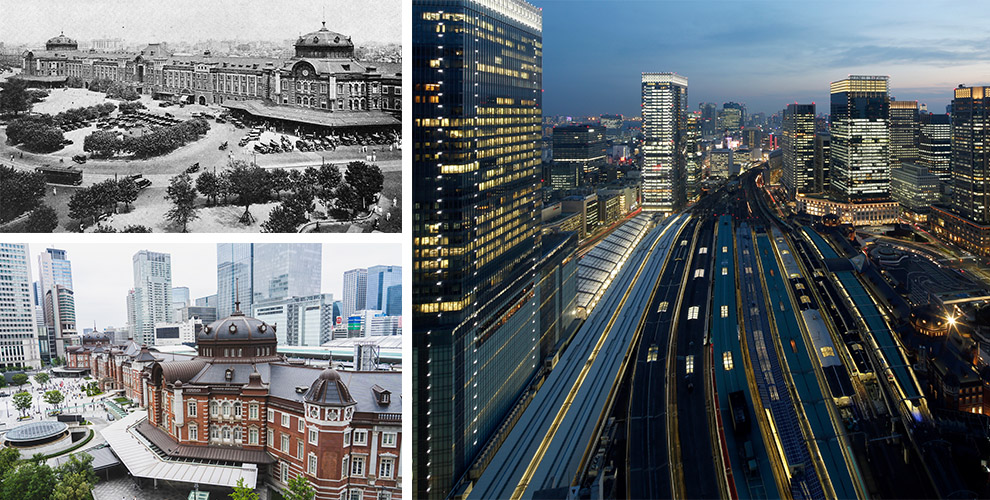 With a prime position on the corner of Terreiro do Paço – the Palace Square – Pousada de Lisboa has watched over Lisbon’s comings and goings for centuries as both the local police station and the Ministry of Internal Affairs. Now, beautifully restored and transformed into a luxury, boutique hotel, it’s an elegant hideaway in the heart of the city. While the majestic golden façade hints at its past, it’s the interior of Pousada de Lisboa that really wows. Candelabras and chandeliers lend the restaurant a touch of vintage glamour, while the jewel in the hotel’s crown is the magnificent ballroom. When it’s time to head upstairs, you’ll find rooms that are chic and contemporary, with grand windows giving far-reaching city views. 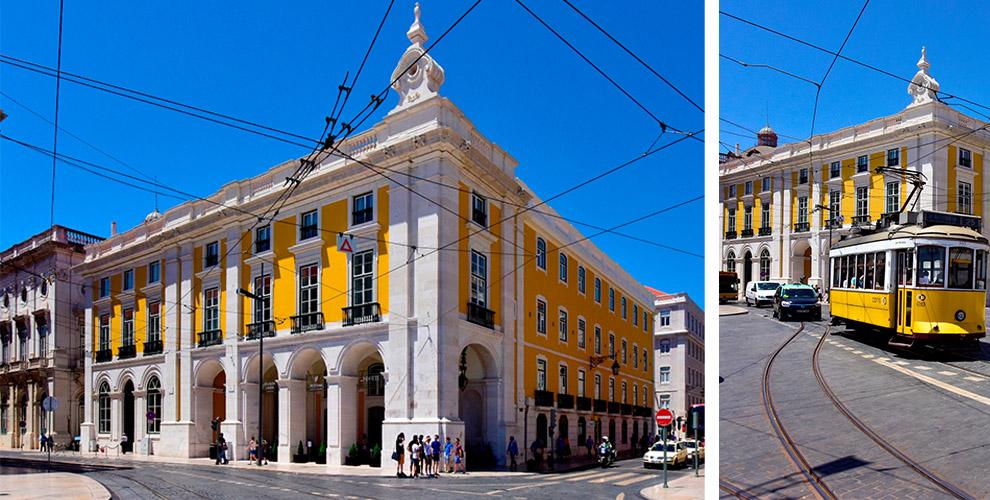 Set in an early 20th-century building that was once a bank, this luxury hotel reimagines its stately setting as somewhere to mark moments rather than count coins (and is in fact now an entirely cashless hotel). Bank Hotel‘s pièce de résistance is the charming Bonnie’s restaurant, situated in the former Bank Hall. Under the high glass ceiling, and filled with plush velvet banquette seating, parlour palm plants and the most epic chandeliers, Bonnie’s feels like it is straight out of a Wes Anderson movie. Be sure to order the ‘Piggy Bank’ dessert, which has become somewhat of a local attraction… 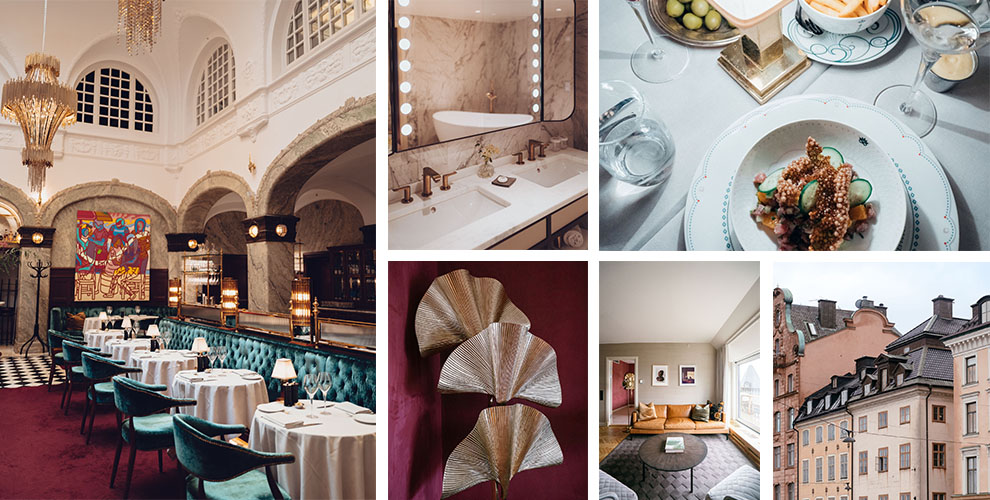 Set in the heart of Le Marais, Hôtel du Petit Moulin’s 17th century building was once home to Paris’ first bakery and its 1900 shop frontage (listed by French Heritage) is so convincing that passersby still pop their heads in for a croissant. With his house nearby on Place de Vosges, Victor Hugo would get his daily baguette from here. Now behind the boulangerie façade is a 17-bedroom hotel, designed by Christian Lacroix, which tells the story of Paris’ oldest quartier, Le Marais. The atmosphere at Hôtel du Petit Moulin changes from room to room which is very much its charm. From brightly coloured 60s furniture in the bar, and plush textiles, leather sofas and highly decorative walls in the lounge to green corridors with polka-dot carpeting that lead to Baroque, Rococo and Couture designed rooms, it is a fascinating journey through the artistic expertise of Lacroix. 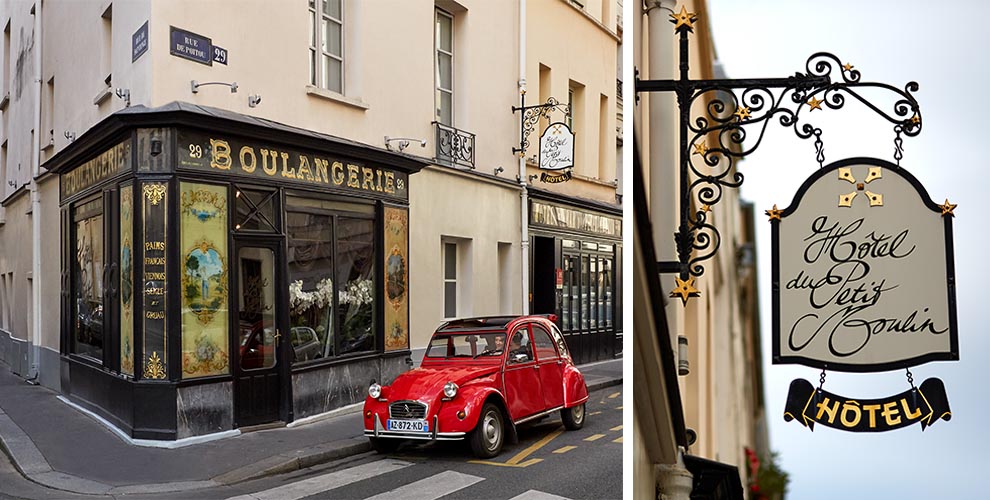 Leopold Hotel is a Grade II listed former 19th century grammar school set in Sheffield’s fashionable Leopold Square. The hotel has been carefully restored to reflect the building’s past, featuring period features and historic black and white photographs of the school boys who ruled the corridors – former students include Peter Springfellow and Joe Cocker. High arched ceilings and large windows create a sense of light and space and rooms are all tastefully decorated. 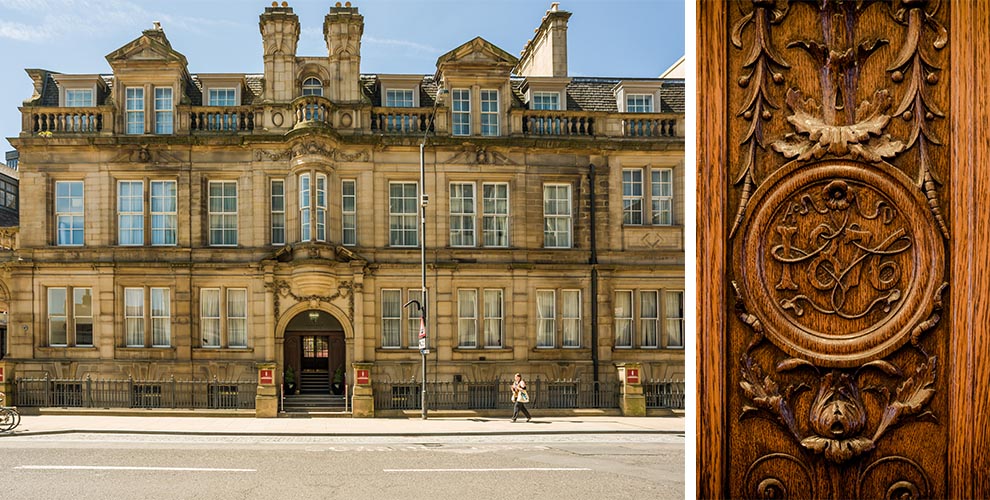 7. The LaLiT, London – A Grammar School

In the early-19th century, this stately red brick building in central London started life as St. Olave’s Grammar School. Today, school lessons have been swapped for city breaks, following a careful transformation into a boutique hotel. From its warm welcome to stylish interiors, The LaLiT London shows that among luxury retreats, it comes top of the class. 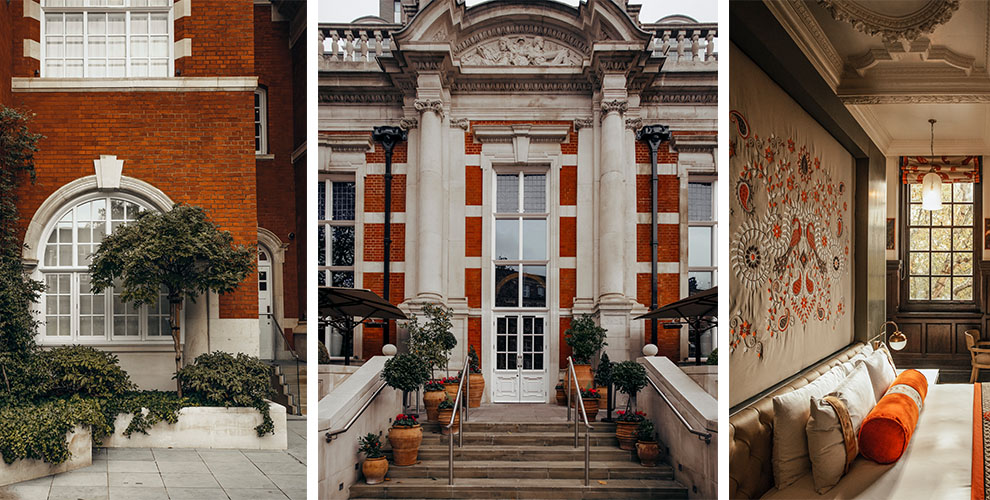 8. Cap Rocat, Mallorca – A Military Base

The breathtaking Cap Rocat was once a 19th century military fortress which blends impressively into the landscape. The fortress was built more than 100 years ago during the war between Spain and the US and also served as military barracks for young Spaniards doing their military service until 1996. The 22  suites are housed in the old cannon rooms that surround the fortress, complete with ‘Sentinels’ terraces for the ultimate romantic hideout. The hotel itself is wonderfully secluded with a drawbridge and offers sensational sea views. 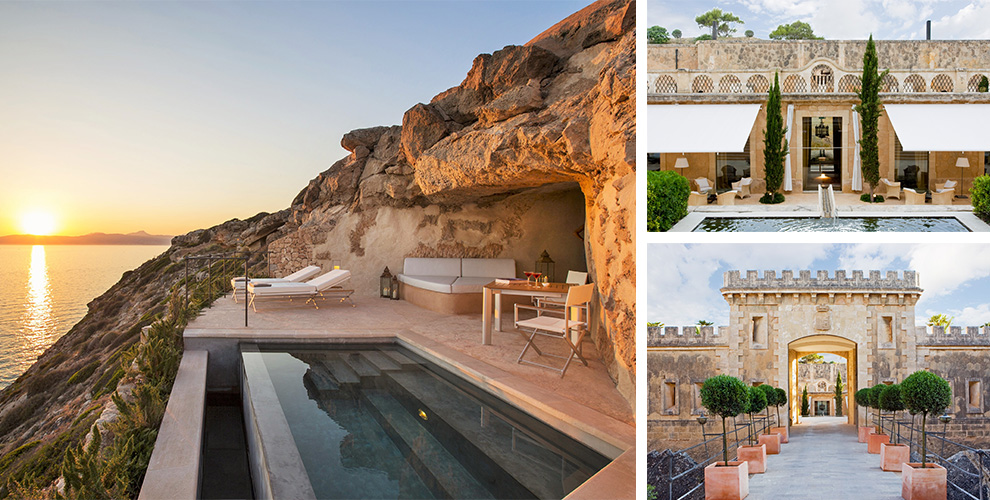 9. The Dylan, Amsterdam, Netherlands – A Theatre

The history of The Dylan stretches back to 1618, when a wooden building was constructed and a theatre called the ‘Deutsche Academie’ was founded – the city’s first official theatre. In 1632, a stone theatre was commissioned, with Dutch plays gracing the stage as well as Vivaldi who conducted the orchestra for some time. In 1772, the building caught fire during a performance and burnt down and the site sold to the church. In 1999, a luxury boutique hotel was born, The Dylan. Featuring just 40 individually-designed rooms, the hotel is a tranquil haven in the buzzing city of Amsterdam. 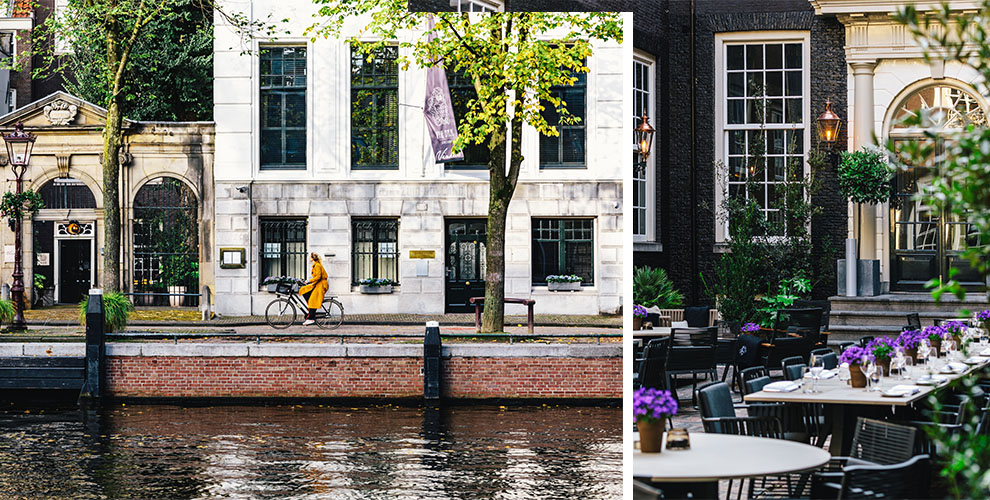 A meticulously renovated 15th century palace in Venice, Ca’Sagredo is now half hotel, half museum with important works of art by 17th and 18th century artists, including Sebastiano Ricci, Giambattista Tiepolo, Niccolò Bambini and Pietro Longhi. With several of the rooms and suites providing a canal view, stay in one of Ca’Sagredo Hotel’s historical grand suites to appreciate 18th-century stuccoed ceilings, bas reliefs and elaborately painted wall friezes. 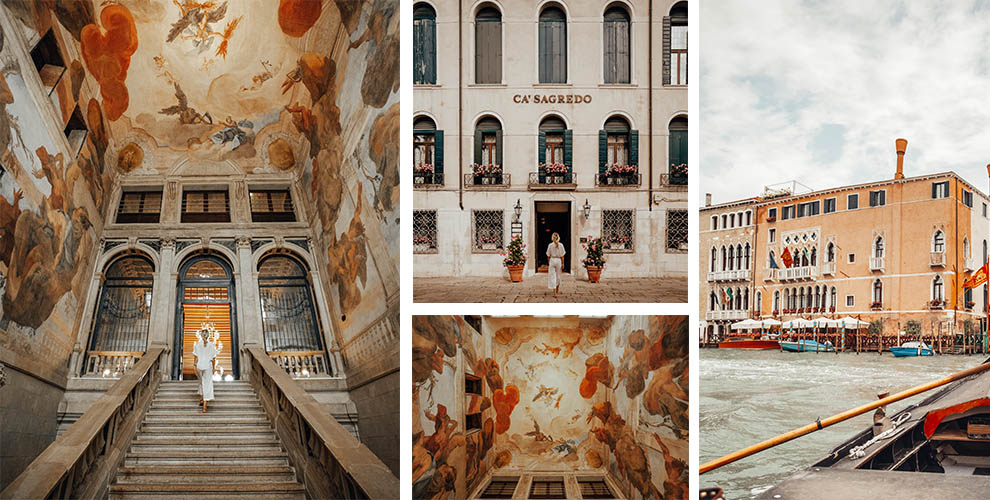