The most beautiful places in Scotland, plus where to stay

Craggy castles, shimmering lochs, and tumbling waterfalls. There is a rugged, windswept wildness to Scotland, from the gorse-carpeted coastline to the heather-dotted headlands, and the silent stretches of countryside in between. While there are history-filled sites and outdoorsy delights at every turn, here is our shortlist of Scotland’s loveliest landmarks and naturally beautiful boltholes – where a luxurious night’s sleep is never too far away. 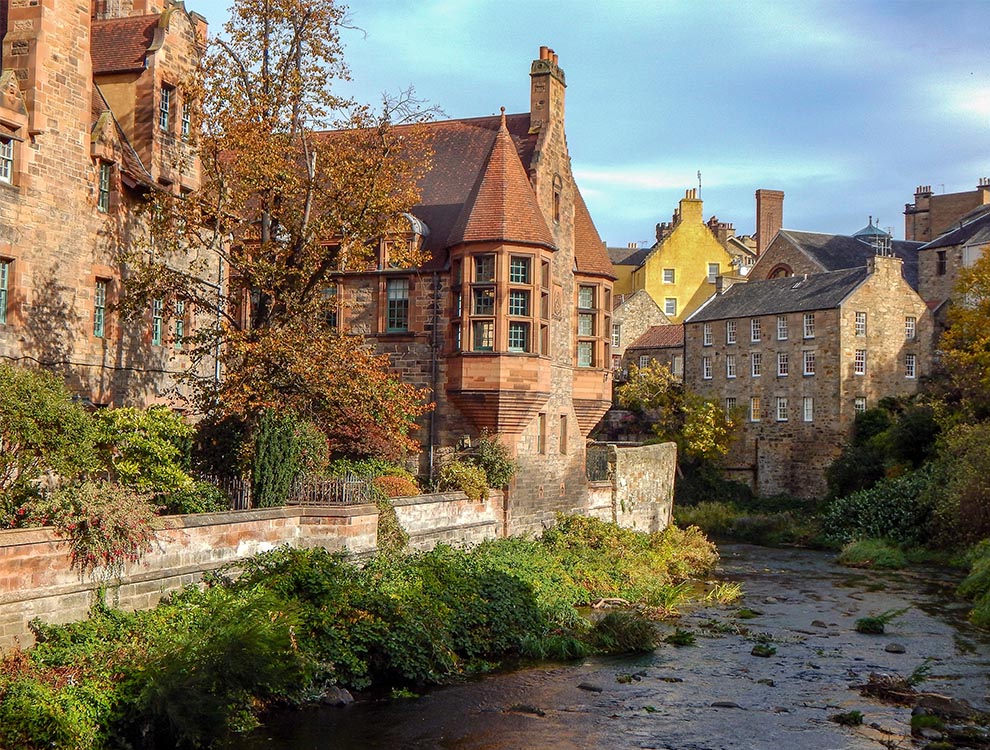 A bucolic riverside village sitting pretty on the banks of Edinburgh’s Water of Leith, this photogenic patchwork of colourful buildings feels a world away from the buzzy streets of the Scottish capital – and yet is just a short stroll from Princes Street. Historically this was where 11 water mills once stood, the remains of which can still be seen in the mill stones and stone plaques decorated with baked bread and pies dotted around the village. 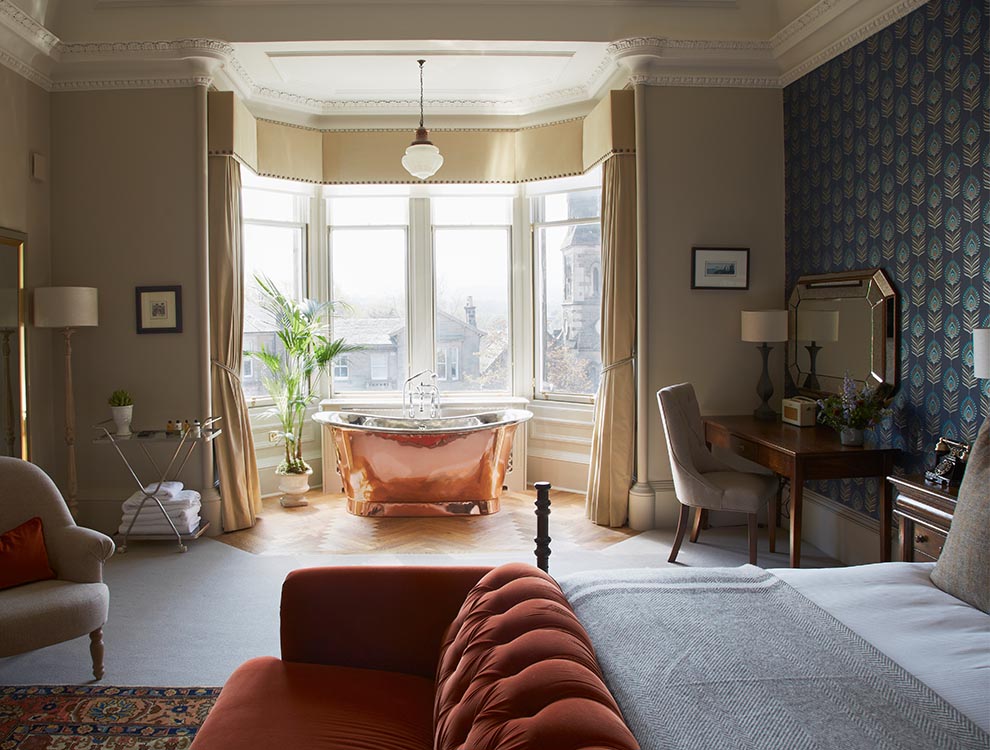 Where to stay: A scenic walk along the river will take you to The Dunstane Houses, a pair of sumptuously styled townhouses set in the quieter West End of Edinburgh. Expect homemade shortbread on arrival, freestanding bathtubs with views over the Pentland Hills, and an impressively stocked vintage whisky cabinet. 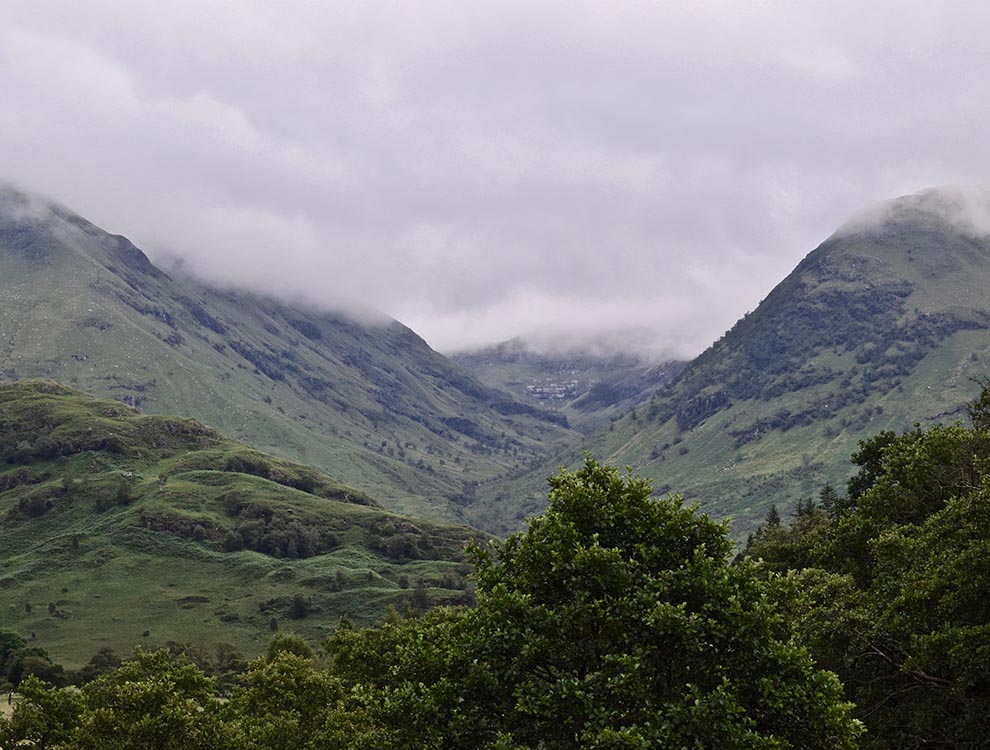 The highest mountain in the UK, this mist-shrouded sleeping giant tops many climbers’ lists – and for good reason. This dramatic peak in the western Highlands more than lives up to its Gaelic name meaning ‘head in the clouds’, as intrepid mountaineers are rewarded with panoramic views from the summit which can stretch as far as Northern Ireland on a clear day. Beginners should take the Mountain Track (otherwise known as the Pony Track), while more experienced hikers can rise to the challenge of the Carn Mor Dearg Arête ridge route. 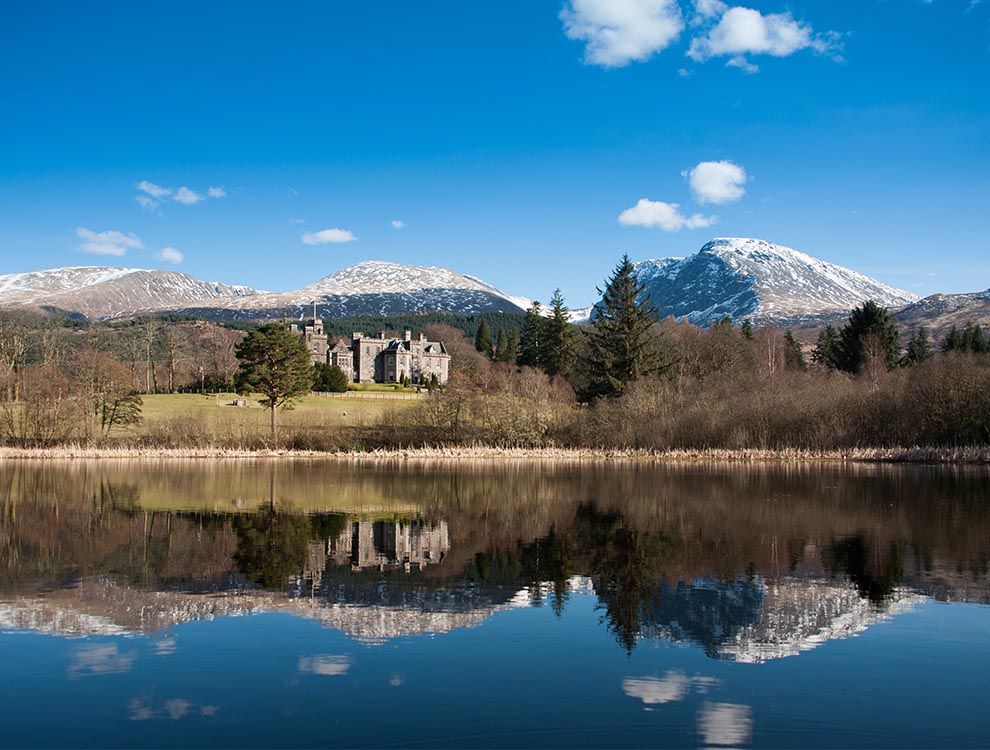 Where to stay: Nestled in the foothills of the Nevis Range, just a stone’s throw from Fort William, Inverlochy Castle is a Highland hideaway like no other. Storybook turrets are reflected in the castle’s private loch which is wrapped in enchanting woodland, and inside the stone walls you’ll find deep-canopied beds and baronial fireplaces. 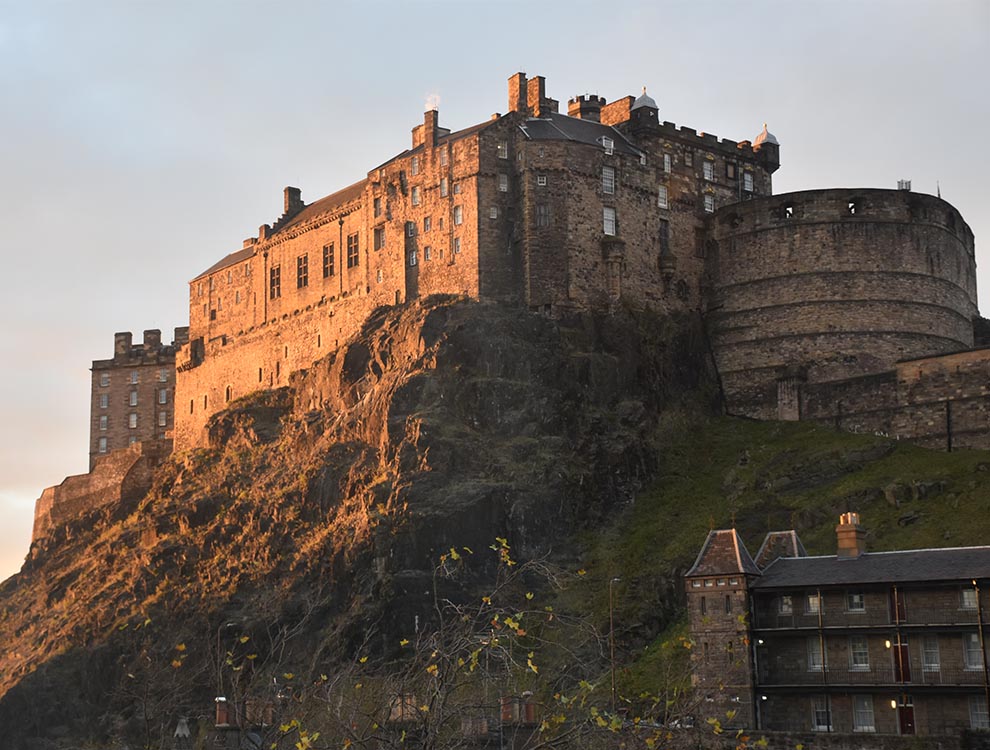 Dominating the capital’s skyline from its prominent position on Castle Rock, this historic fortress sits at the top of the Royal Mile, a popular Old Town street lined with Scottish souvenir shops which links the castle with Holyrood Palace. This is the place to pick up shortbread, fudge, and whisky before heading down to Grassmarket for an alfresco drink in what used to be the city’s main livestock market square. 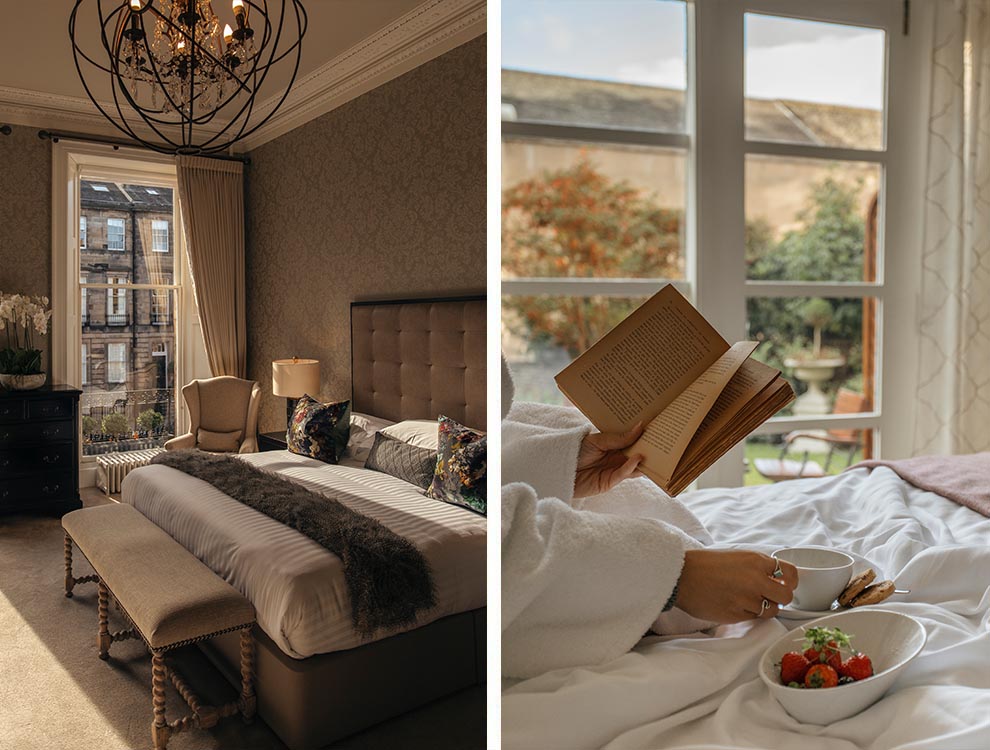 Where to stay: Perfectly placed in the heart of Edinburgh’s New Town, Nira Caledonia settles guests into two elegant Georgian townhouses which have been beautifully decorated in sophisticated shades and eclectic furnishings. Come for the cosy feel and light-filled rooms, stay for the superb selection of single malt whisky. 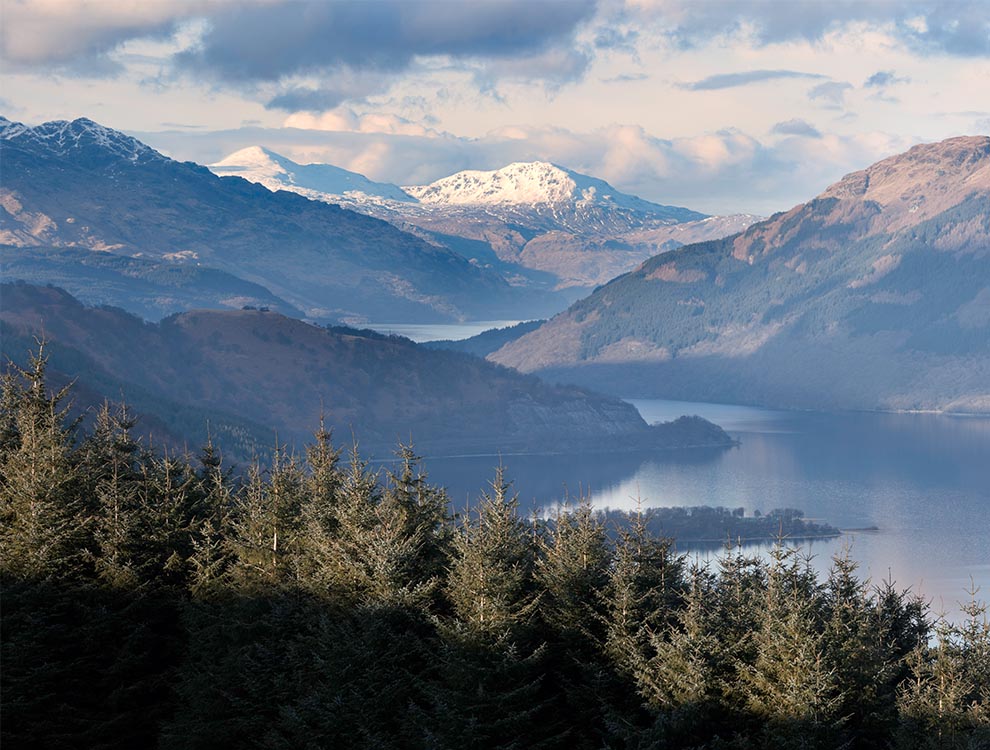 A sprawling landscape of wild glens, sleepy forests, and sparkling lochs which divides the Highlands from the Lowlands, The Trossachs have inspired a long line of artists and poets from William Wordsworth to Walter Scott. At the heart of the National Park lies Loch Lomond, where watersports enthusiasts can kayak, canoe, and cruise across the smooth surface, while back on dry land you can bike, hike, or horse ride up and down the majestic Munros. 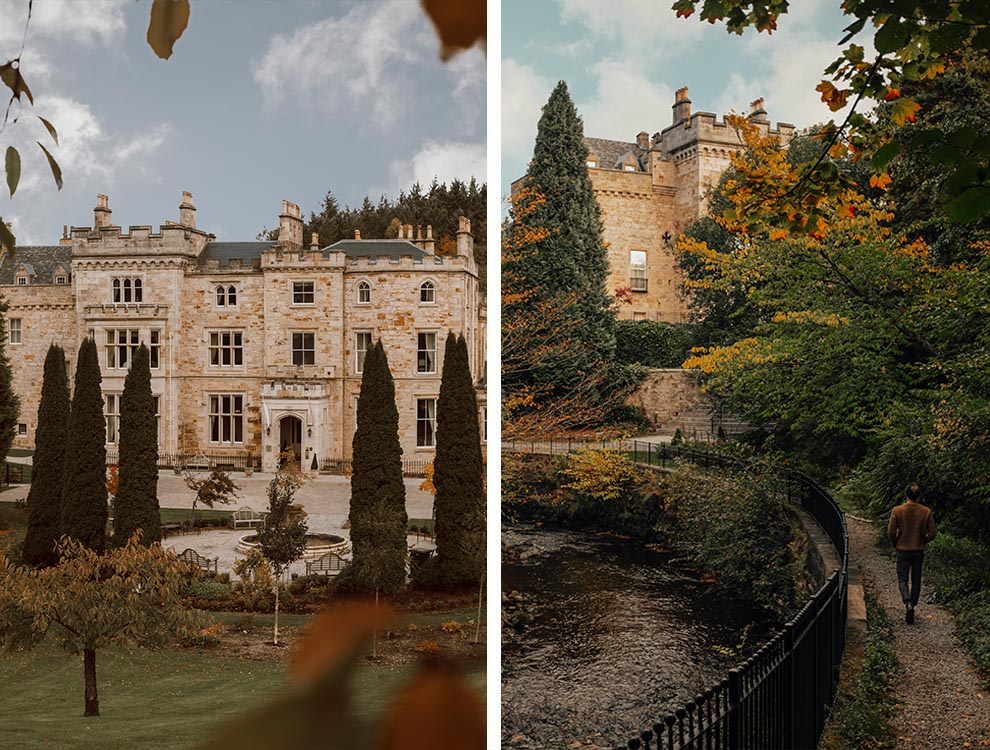 Where to stay: A clotted cream-coloured castle with 15th century Robert the Bruce roots, Crossbasket Castle is a landmark Scottish retreat just over an hour from The Trossachs. Settle into the wood-panelled library or a window seat with River Calder views after a day spent exploring the National Park – Crossbasket offers guided boat tours of Loch Lomond followed by a locally sourced lunch at Monachyle Mhor, including seasonal produce from the Mhor farm. 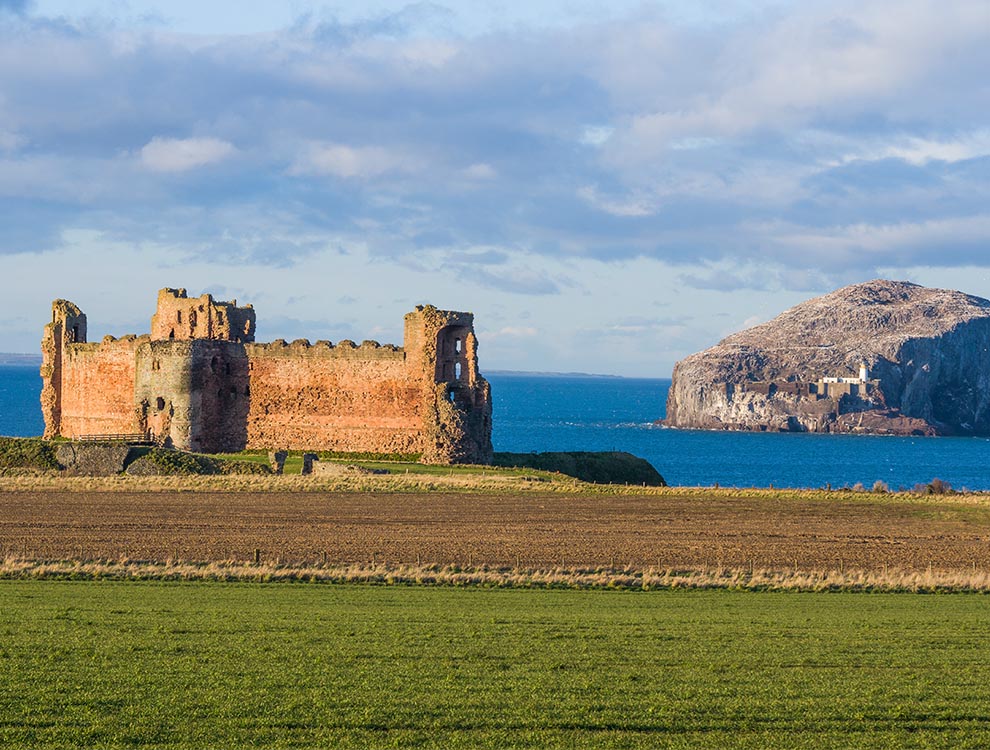 Once the family seat of the Red Douglas dynasty, Tantallon Castle is perched on a cliff edge overlooking the North Sea towards the seabird colonies of Bass Rock. This spectacular stronghold is seen as Scotland’s last great medieval castle, built on a site which is said to be the origins of the legendary King Arthur’s Camelot. 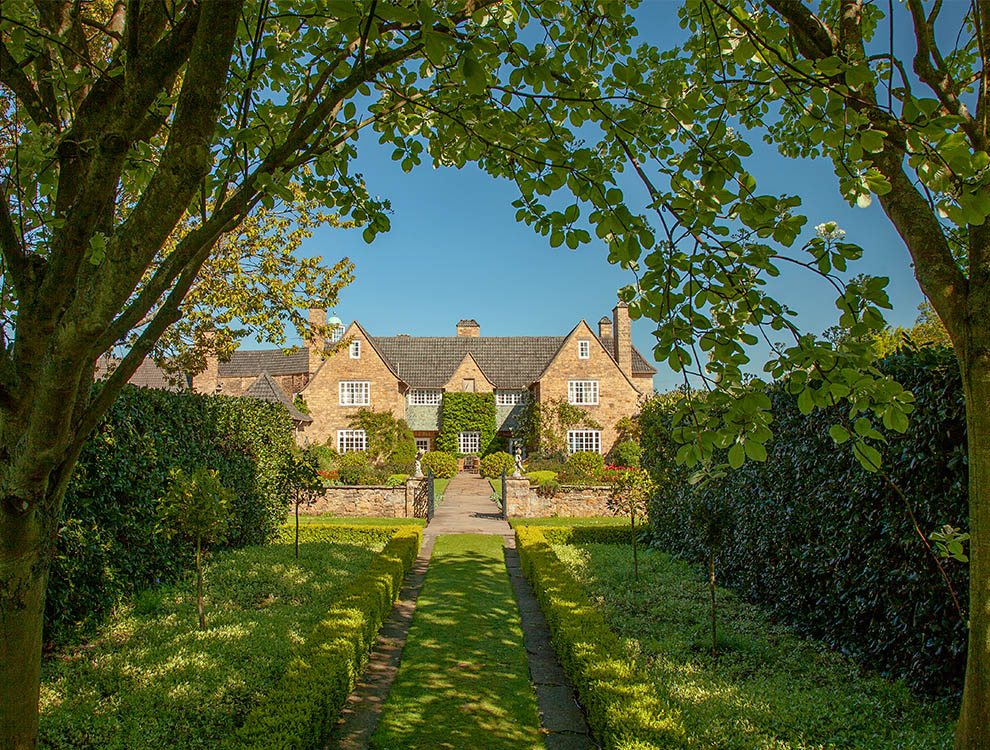 Where to stay: Set in the charming East Lothian countryside, Greywalls Hotel and Chez Roux is a classically designed Edwardian country house with walled gardens. When you’re not getting to grips with the Scottish golfing scene on the world famous Muirfield golf course, you can join one of Greywalls’ guided tours of the Tantallon ruins and nearby Rosslyn Chapel, one of the cinematic settings for The Da Vinci Code. 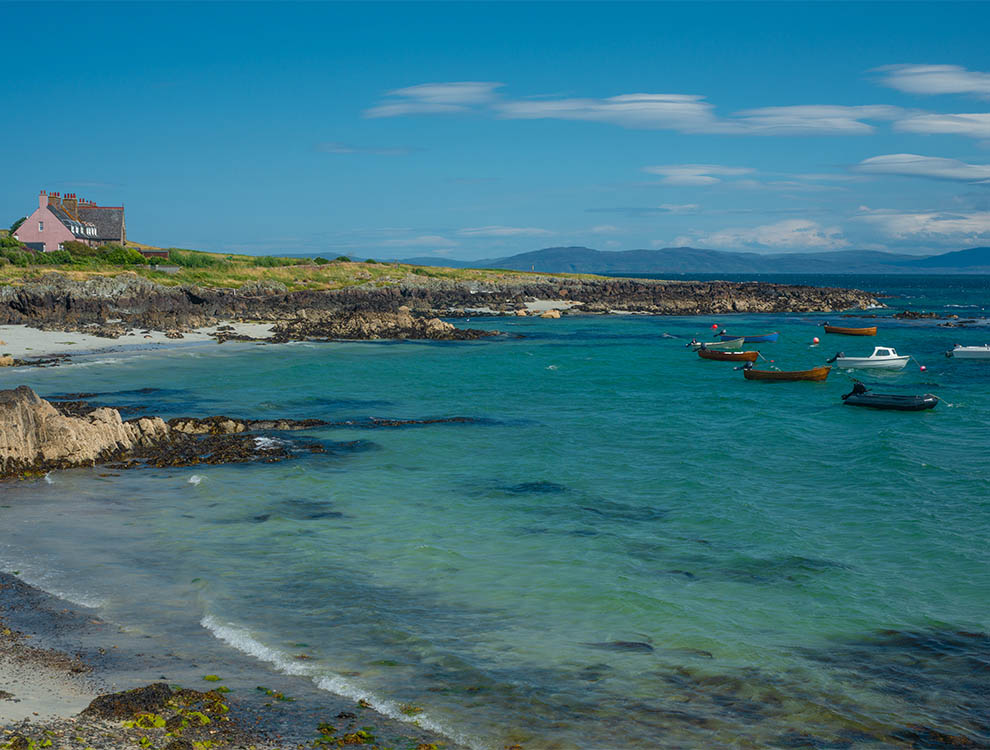 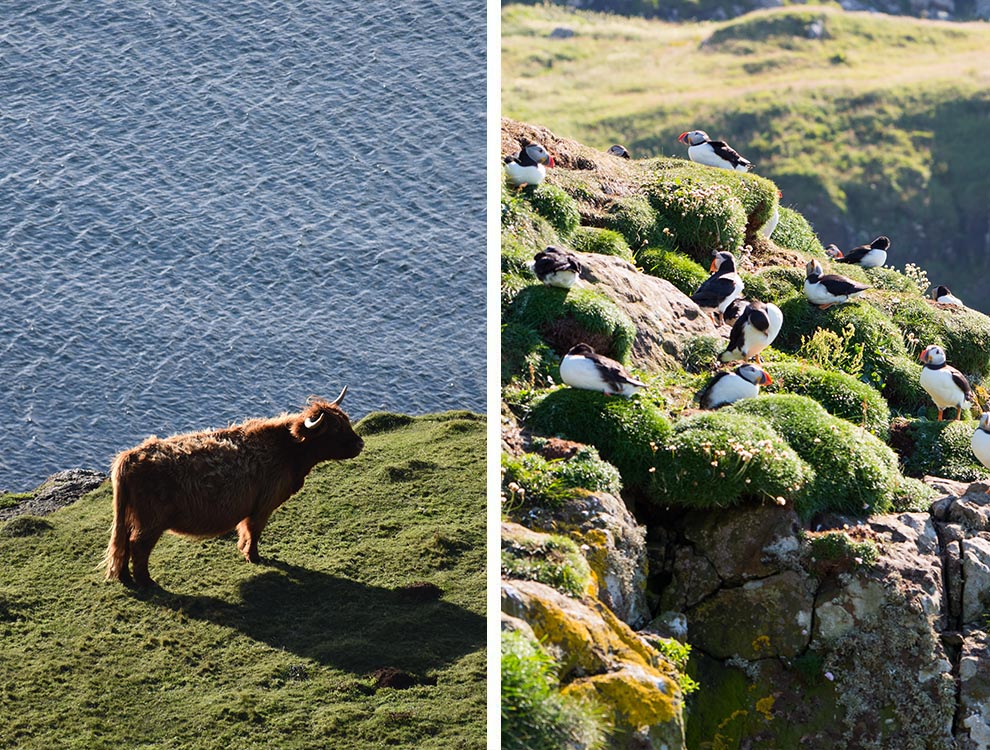 With its white sandy beaches lapped by soothing blue waves, there’s a dream-like, desert island feel to the wildlife-filled Isle of Mull. A short ferry ride from the west coast of Scotland, the Isle of Mull and the neighbouring tiny island of Iona are a birdwatcher’s paradise, as eagles soar above the shoreline and puffins dip and dive off the rocks. Head to the most southerly bay on Iona to gather green serpentine pebbles – known as ‘St Columbas’ Tears’ – and spot seals with their pups from a respectful distance. 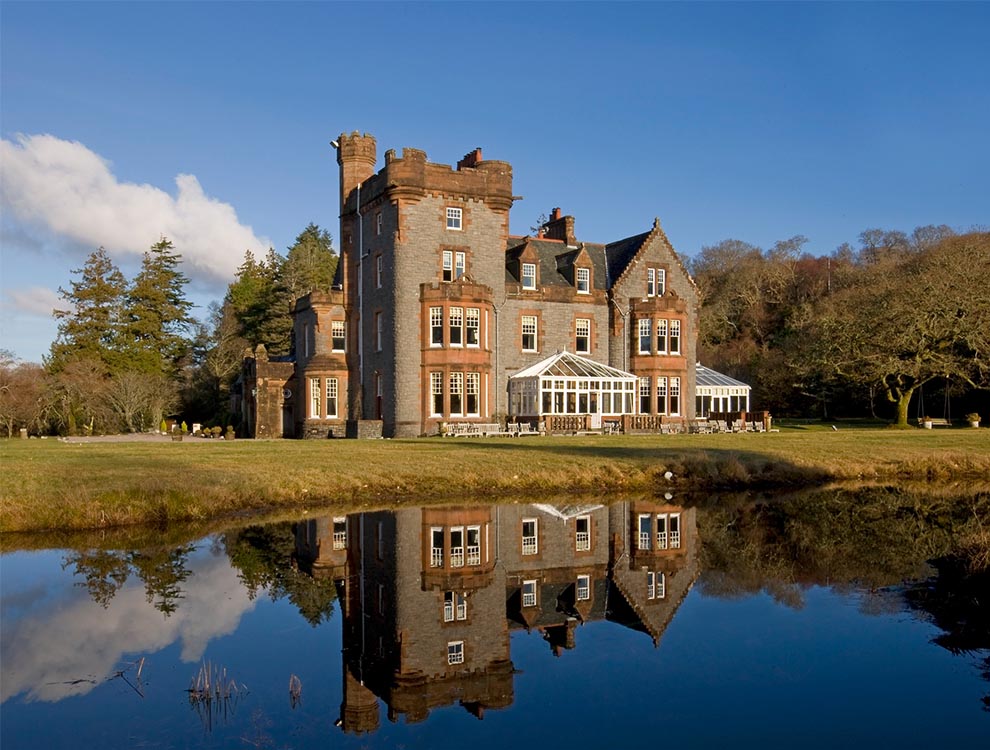 Where to stay: An exclusive island retreat on Scotland’s rural west coast, Isle of Eriska Hotel and Spa comes with soul-stirring views over Loch Creran, and the beautiful island of Lismore. Take a behind-the-scenes visit to Iona Abbey with one of the hotel’s guides, before warming up in a hot tub in one of the Hilltop Reserve rooms. 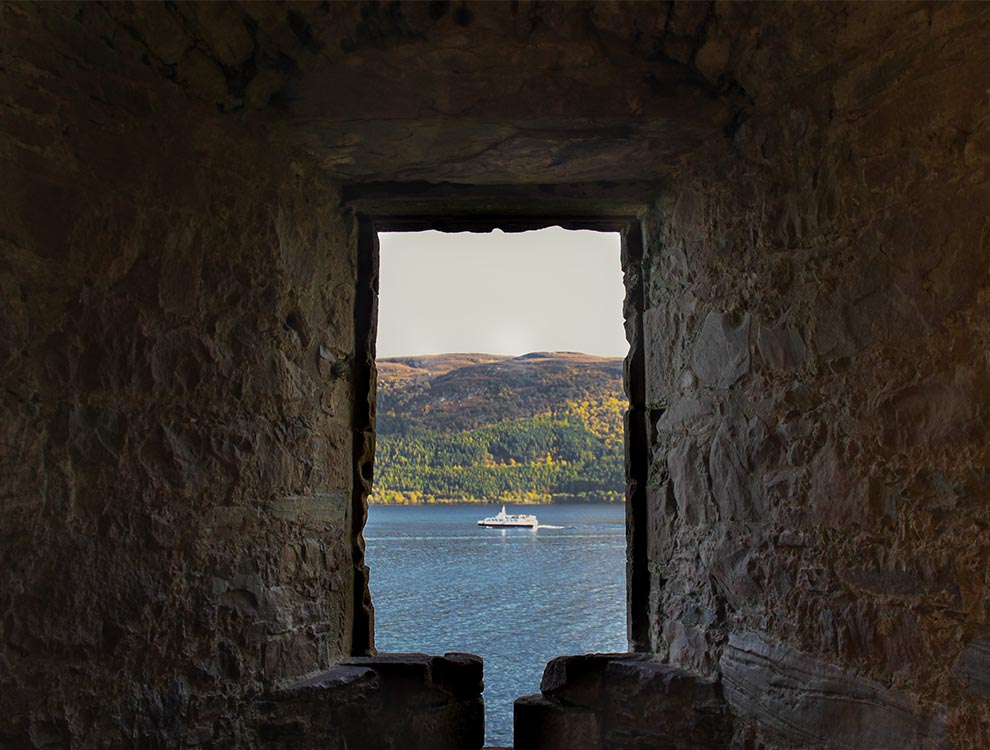 Known around the world as the home of the Loch Ness Monster, this mystical lake is as spectacular as the stories say. Whether you spot Nessie or not, there is plenty to see around the dark expanse of water, which delves deeper than the North Sea, including star-gazing some of the UK’s clearest night skies. 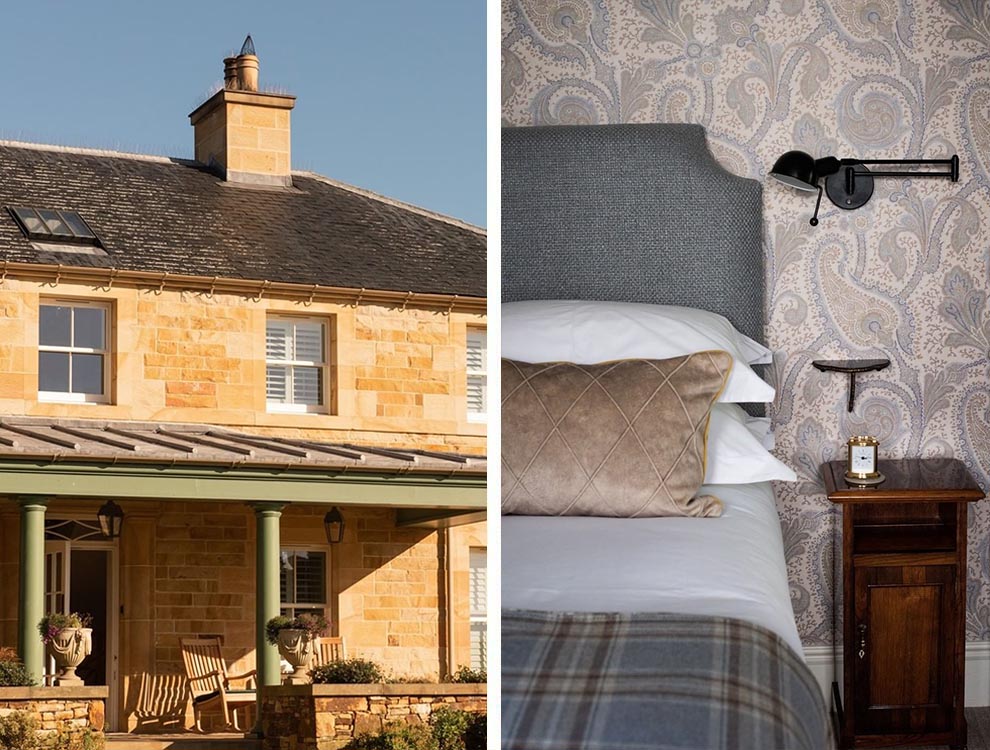 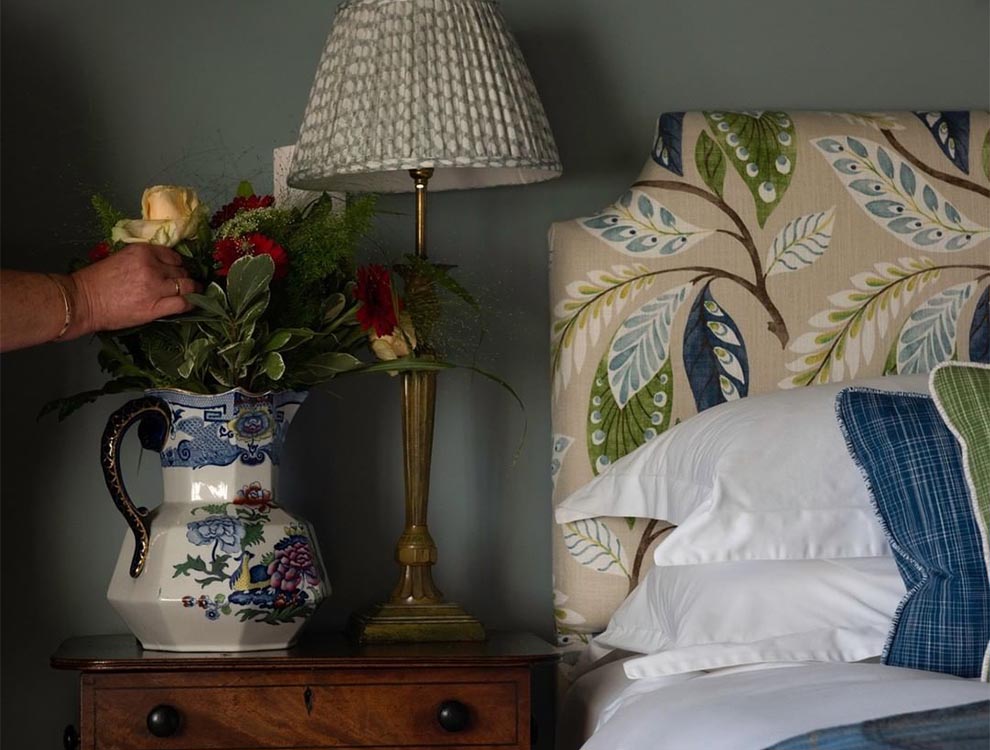 Where to stay: Rooms and suites at Links House are all named after North Highland Salmon Fishing rivers – a reminder that the beauty of the great outdoors flows through this Highland estate which boasts Royal Dornoch Golf Club connections. Alongside fly fishing, whisky tasting, and Outlander tours, the hotel takes guests onto Loch Ness with the Jacobite cruise company for nature-filled days out on the water. 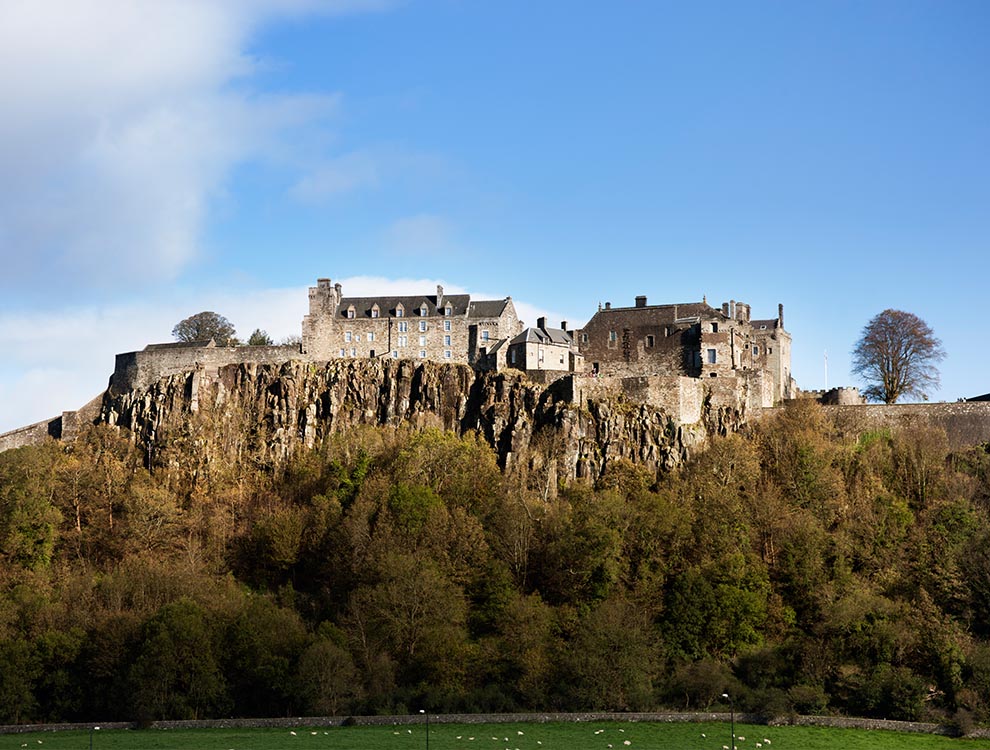 Crowning a vast volcanic rock high above the River Forth, Stirling Castle once held the keys to the kingdom of Scotland and was the childhood home of Mary Queen of Scots. While the beautifully preserved exterior is enough to warrant a visit, there is a wealth of history to be discovered inside the ancient walls, from hand-woven tapestries to a golden banquet hall. The palace has been extensively restored to resemble its 16th century self, including fully furnished royal chambers. 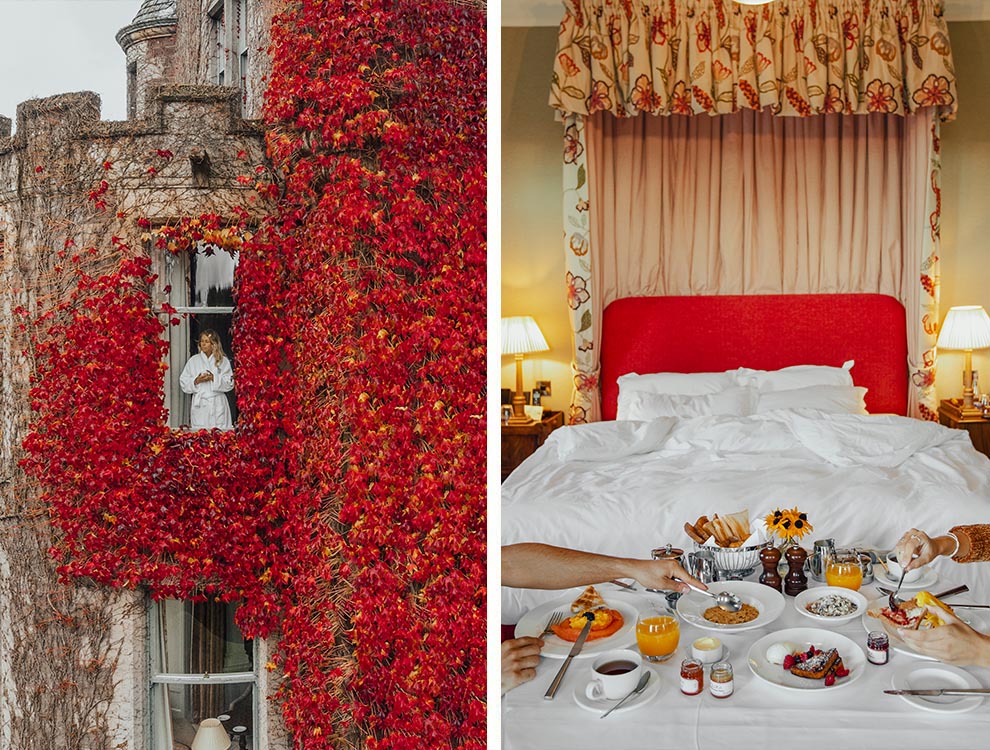 Where to stay: Named after great Scots from the past and present, the rooms at Cromlix have verdant views over the 34 acres of woodland and gardens surrounding this grey-stone Victorian mansion. Save room for your full Scottish breakfast, Cromlix afternoon tea, and French classical dishes by the renowned Chef Albert Roux OBE.