Chef’s Table: a taste of talent from 10 hotel kitchens

A culinary journey around the world to celebrate International Chefs Day

Many of our hotels are home to some of the world’s best restaurants, and are the sorts of places that are well worth forking out for. Fabulous food paired with superb settings are the staple of these fine dining hotels, where you’ll want to reserve a table as much as a room. Here, we sit down with some of the culinary creatives behind our award-winning hotel kitchens and take a closer look at their seasonal menus which champion the very best local produce. 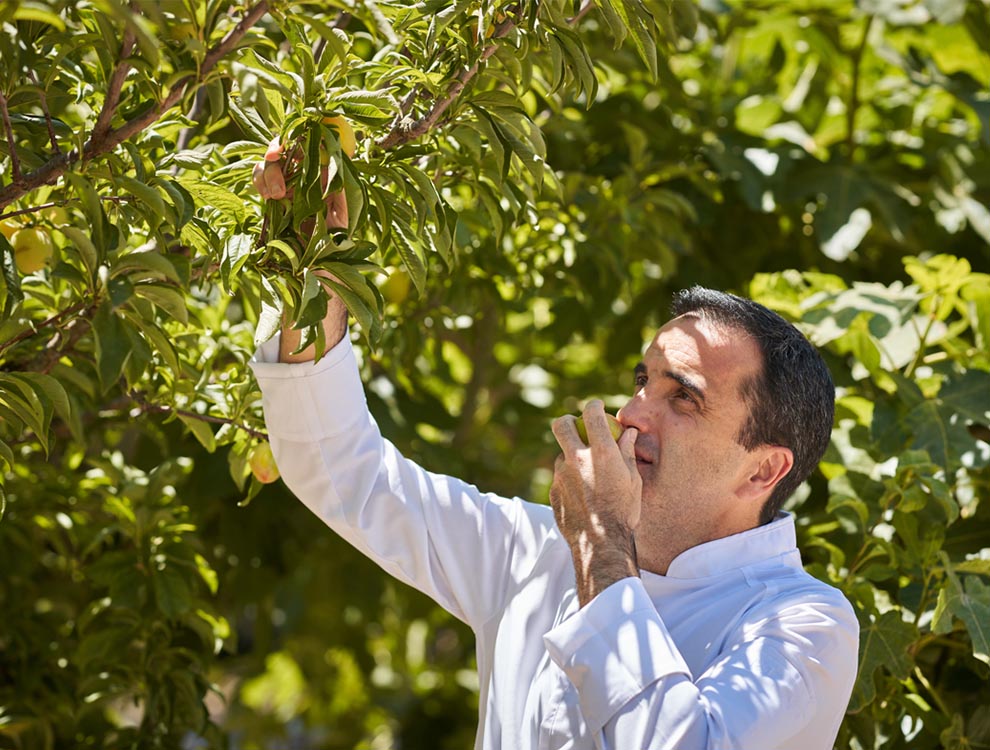 Two-Michelin starred Óscar Velasco and his team serve up an authentic slice of Mallorca at Finca Serena, a converted farmhouse which has stayed true to its agricultural origins. Traditional Mallorcan ingredients grown in the surrounding gardens are given a contemporary culinary twist, giving you a taste of modern Mediterranean cuisine in a daily changing menu. As an important reference in Spanish haute cuisine, Velasco has received the highest recognition from various guides and critics, including 3 Repsol suns, two Michelin stars and the National Award for the Best Chef de Cuisine by the National Academy of Gastronomy in 2007.

Choose to dine in the panoramic Restaurant Jacaranda, or outside amongst the lavender, vines and olive trees. The likes of fennel and orange salad with local sausage, chilled sweetcorn soup, red prawns from the Port of Sóller, avocado, ginger, mint and cilantro, and chocolate buñuelos served Santi Santamaría style currently feature on the farm fresh tasting menu. You will also be able to take part in cooking demonstrations with the hotel’s chefs and visits to the kitchen garden. 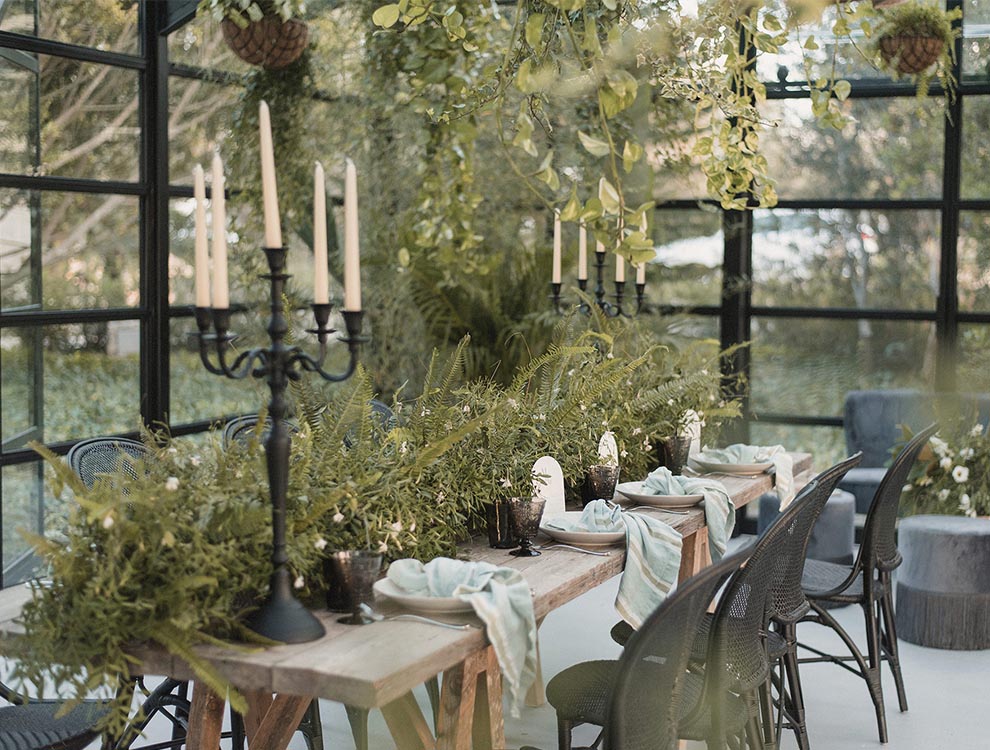 Finca Serena’s new, heated, glass conservatory spectacularly brings the outdoors in – the perfect space for an intimate gathering or a special occasion. 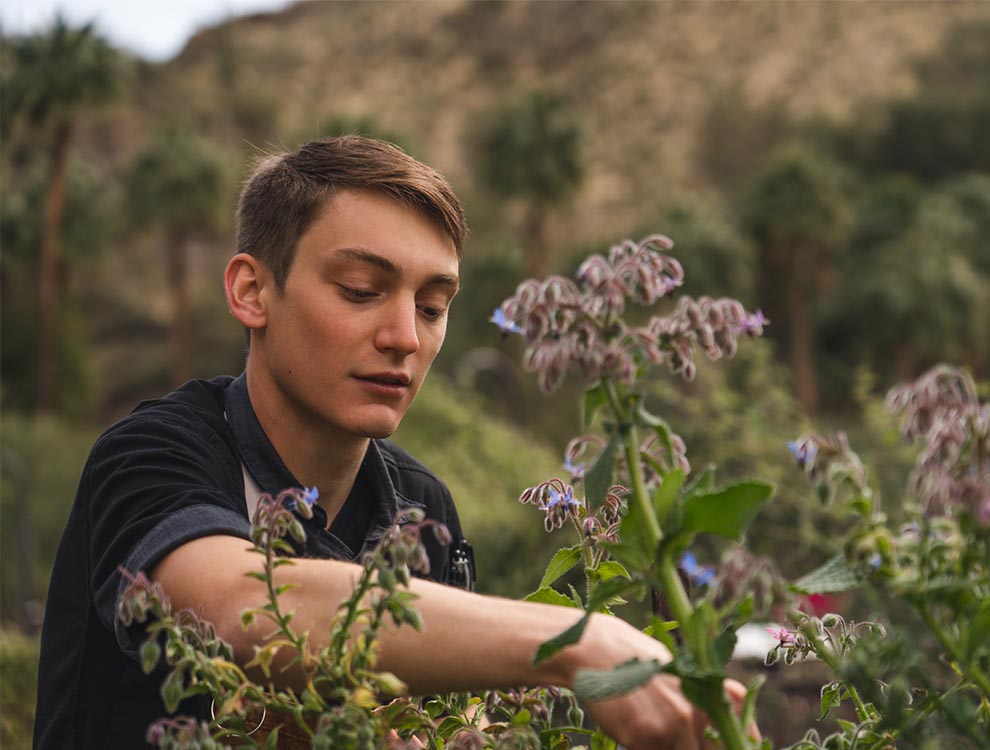 Arizona native and Sous Chef John Amann is part of a team of skilled agronomists, flavour farmers, and kitchen staff at Castle Hot Springs who are helping to plant the seed for the resort’s unique farm-to-table culinary experience. Inspired by his culinary studies of cuisines from around the world, John’s objective extends beyond delivering one-of-a-kind dishes as he strives to educate Castle Hot Springs’ guests that fine dining can be just as delicious when prepared sustainably with locally sourced and antibiotic-free ingredients.

All meals are included during your stay so you can experience the many delights of the ‘harvest of the day’ menu. Daily tours of the three-acre organic farming land are also available for guests on request, which unearth the sustainable growing practices followed by the team, and how they utilise one of the most unique growing climates in the world to cultivate crops from seed to plate. 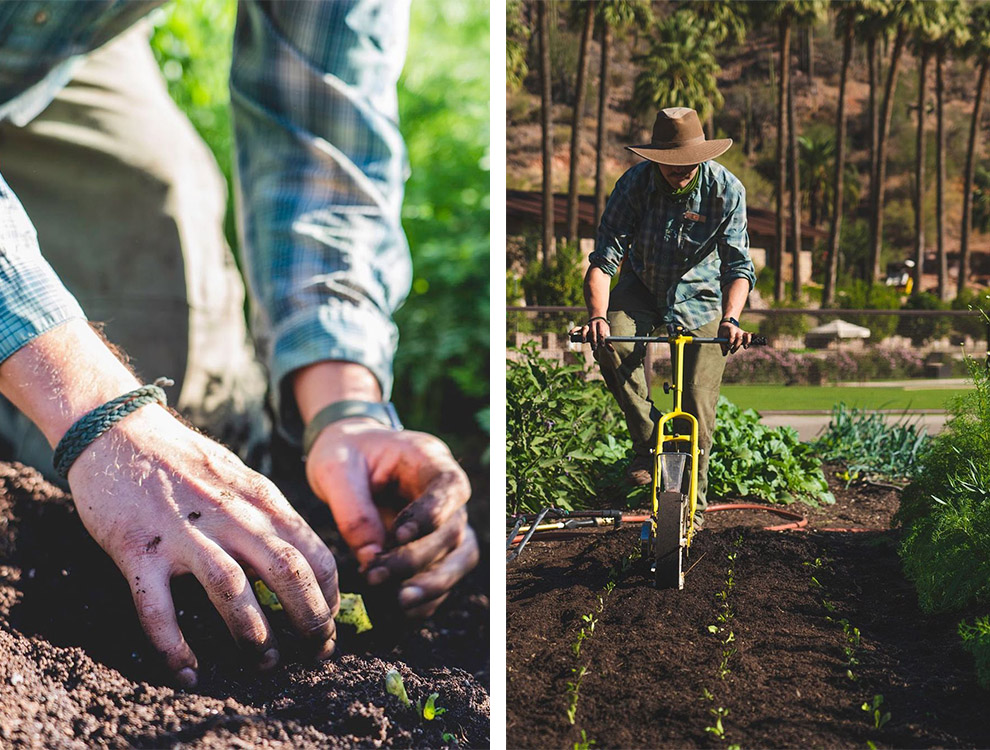 A frequent recipe contributor and regular on Channel 5 News and AZ Family, when he’s not in the kitchen working on his latest pickling and preserving recipes, the 24-year-old spends his time off hiking and mountain biking in the surrounding and Bradshaw Mountains.

To whet your desert appetite, John and the team share some of their sought-after recipes here. 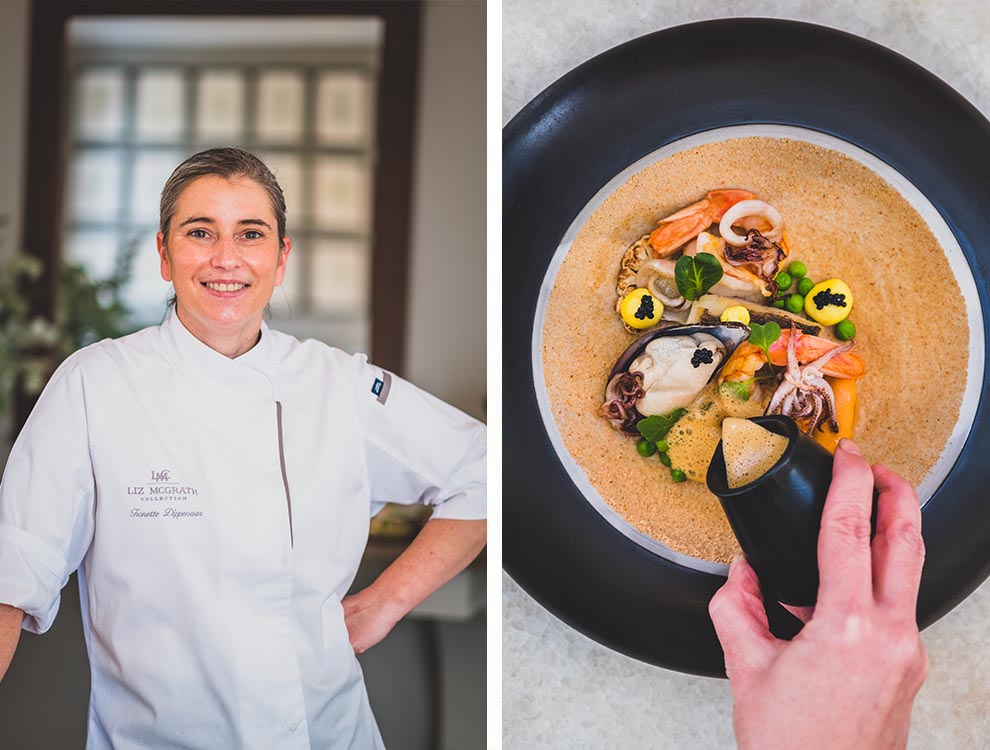 While the Table Mountain views are something special, there’s another kind of table The Cellars-Hohenort is known for. People travel from far and wide for a reservation at The Conservatory, overseen by Executive Chef Tronette Dippenaar. Since joining The Liz McGrath Collection in 2008 as Chef de Partie at The Marine in Hermanus, Tronette has worked at all three of the group’s beautiful hotels – working her way along the Garden Route to The Plettenberg where she was promoted to Head Chef. Growing up on a farm in Robertson, Tronette later gained international experience while working in some of Scotland’s finest five-star hotels, before returning to home turf as one of the leading chefs in a traditionally male dominated industry.

“I think one of the biggest challenges for female chefs, especially those who are moms, is juggling family responsibilities with their restaurant career. Every successful woman needs a good support system at home.” Tronette’s advice to young women with chef aspirations is to add value to the lives of those around them, work with passion and try not to take things personally. “Only you determine your success, and dedication and persistence is the best way to succeed at something you want to do well at,” she adds. 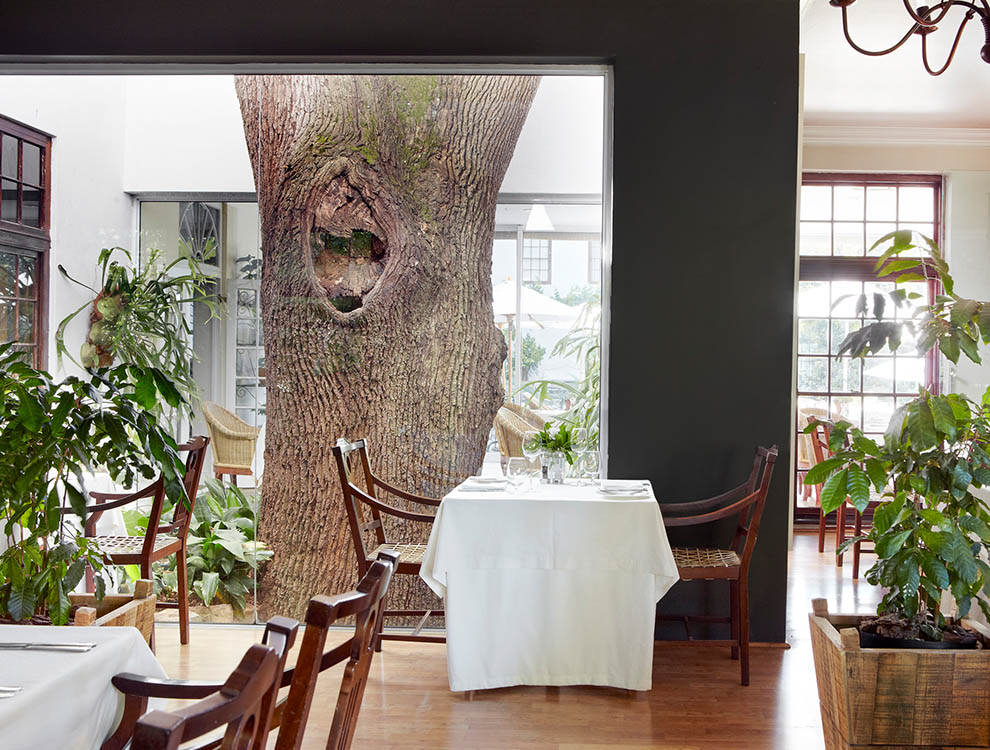 With its verdant setting in ‘Cape Town’s Vineyard’, dishes at The Conservatory pay tribute to their natural surroundings, incorporating fresh produce picked from the historic wine estate’s very own gardens whenever possible, including local fynbos. From Cape Malay rubbed line fish, and mushroom and lentil bobotie, to Springbok on the braai, the menu has something for everyone and the choice of three dining spaces – the main dining section, with stunning views of the historical garden with its Camphor trees; the breakfast room; and the terrace overlooking the garden. 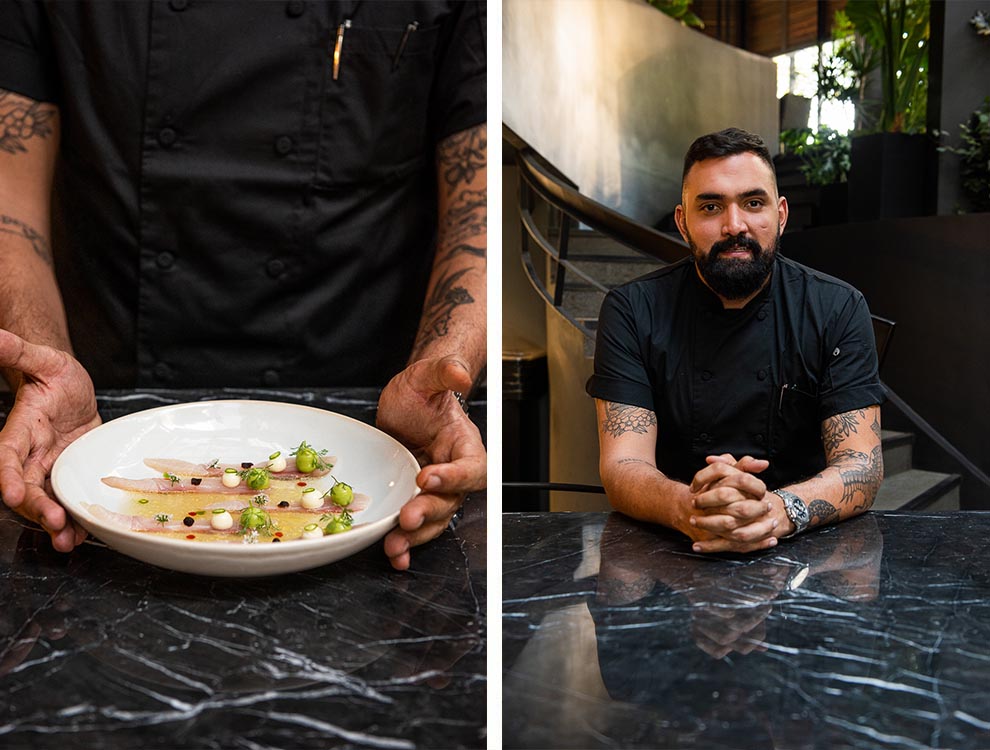 A key ingredient of Brick Hotel’s growing reputation as the hot spot in Roma is Head Chef Armando Acosta, a Mexico City native and one of the country’s rising top chefs. Chef Acosta blends his Mexican roots with a culinary background from Paris and Spain, particularly from his time as chef at Mugaritz and El Celler de Can Roca, both previously named as part of the World’s 50 Best Restaurants. Chef Acosta and his team execute flawless techniques with a clean cooking style intended to elevate seasonal ingredients while promoting the importance of sourcing local suppliers, getting to know their ingredients from nature to knife. 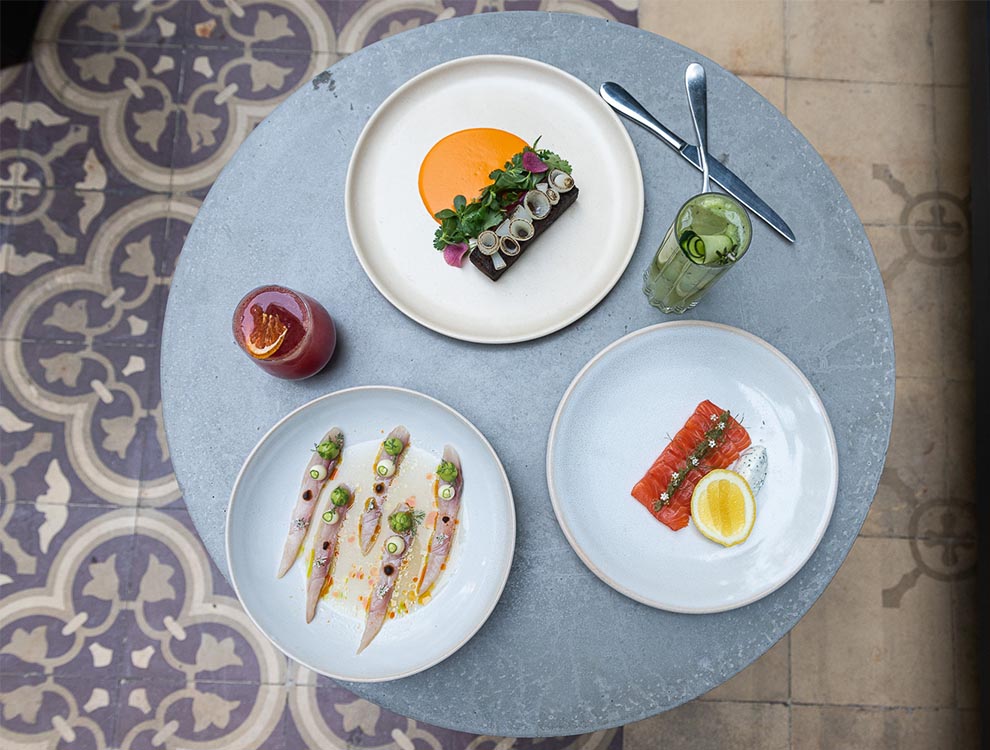 Classic Mexican dishes are remixed and refreshed; you might find cactus salad and watermelon tartare alongside suckling pig gorditas. Chili also features in the inventive cocktail menu which puts Mexican zing into the finest tequilas, mezcal and gin. 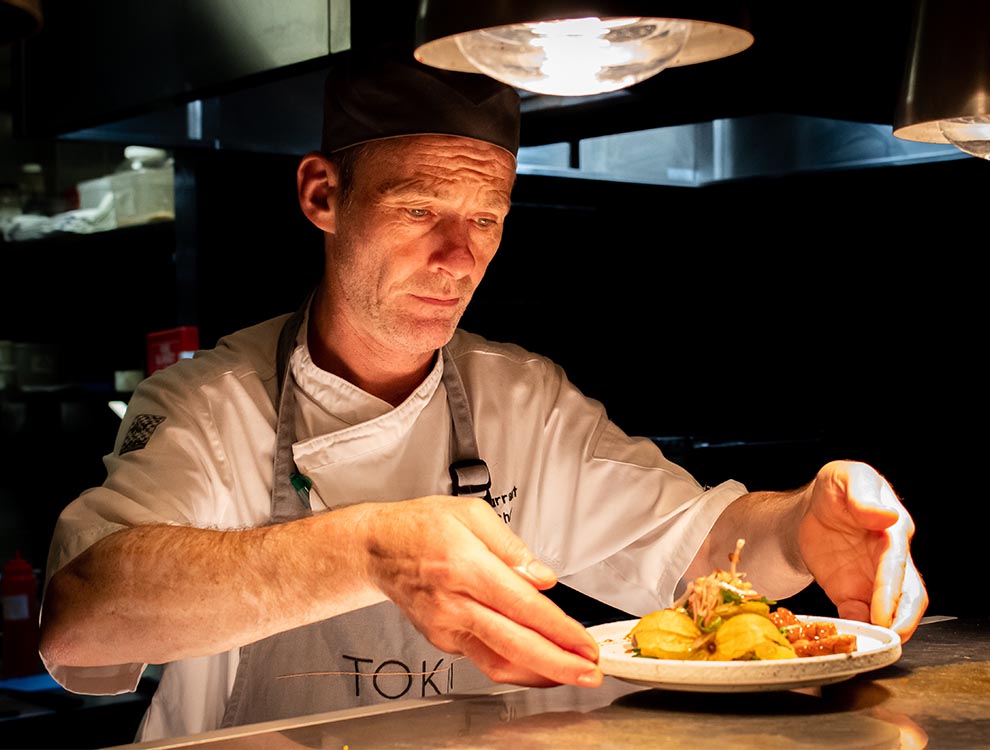 With the likes of Claridges, The Savoy, and a Michelin-starred kitchen in the South of France under his belt, Gary Durrant stepped out of his classical French comfort zone when The Arch relaunched as The Prince Akatoki in 2019. Gary took up the challenging but rewarding roll of learning a new type of cuisine and cooking skills, adding a new bow to his culinary string. Now accomplished in the art of making sushi and trained in Japanese practices by some of the most talented Japanese chefs from Tokyo, he has fully embraced the Japanese culinary arts. 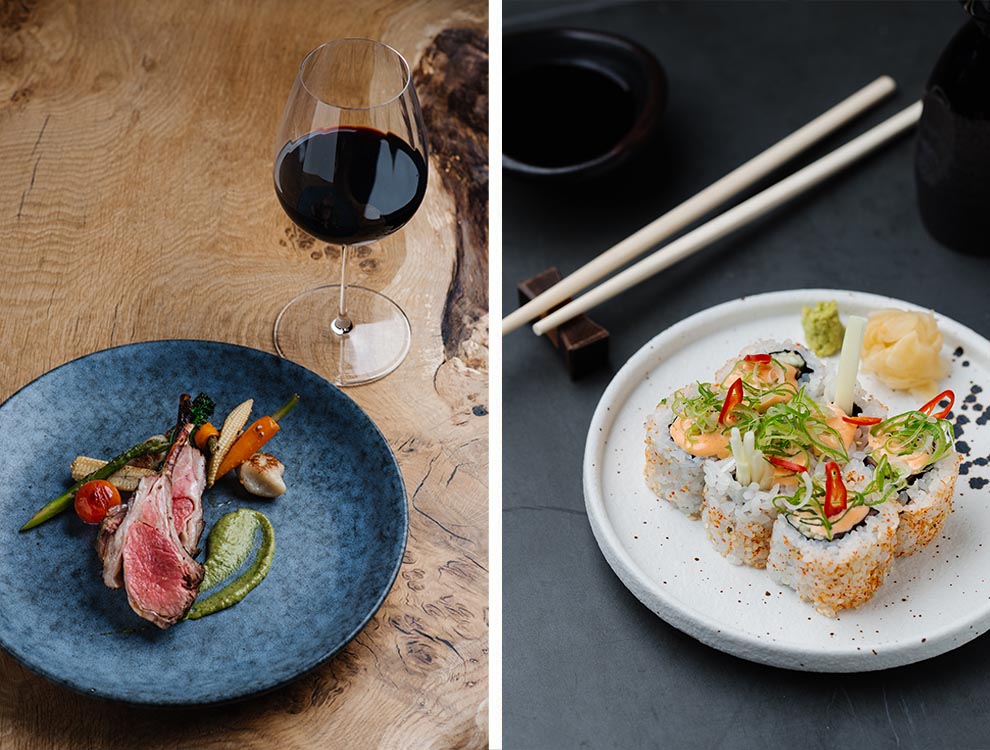 Fusing authentic Japanese flavours with homegrown produce from suppliers around London, dining at TOKii is the perfect blend of east and west. Each dish – from fresh salads to sushi – is artfully presented as a mini masterpiece. Think buttermilk fried chicken dipped in gochujang mayo, Yellowtail carpaccio with jalapeno and yuzu sesame dressing, and matcha ice cream.

Born and raised in Thailand, Chef Rossarin Sriprathum (affectionately known as Rin) was inspired to cook by her grandmothers who also happen to be a Thai chef and pâtissier. She observed how they prepared and cooked food with homely recipes combining some secret techniques which allowed her to explore the culinary world of Thai cuisine from an early age.

Spending over a decade at The Regent Bangkok (now known as The Four Seasons Bangkok), Chef Rin had an exclusive experience in presenting traditional Thai cuisine for many Thai food promotions in various countries including Australia, Indonesia, Hong Kong and Japan. Then, she moved to England to be Assistant Head Chef at the renowned Siam House Restaurant and Millennium Hilton Bangkok before joining The Sukhothai Bangkok. 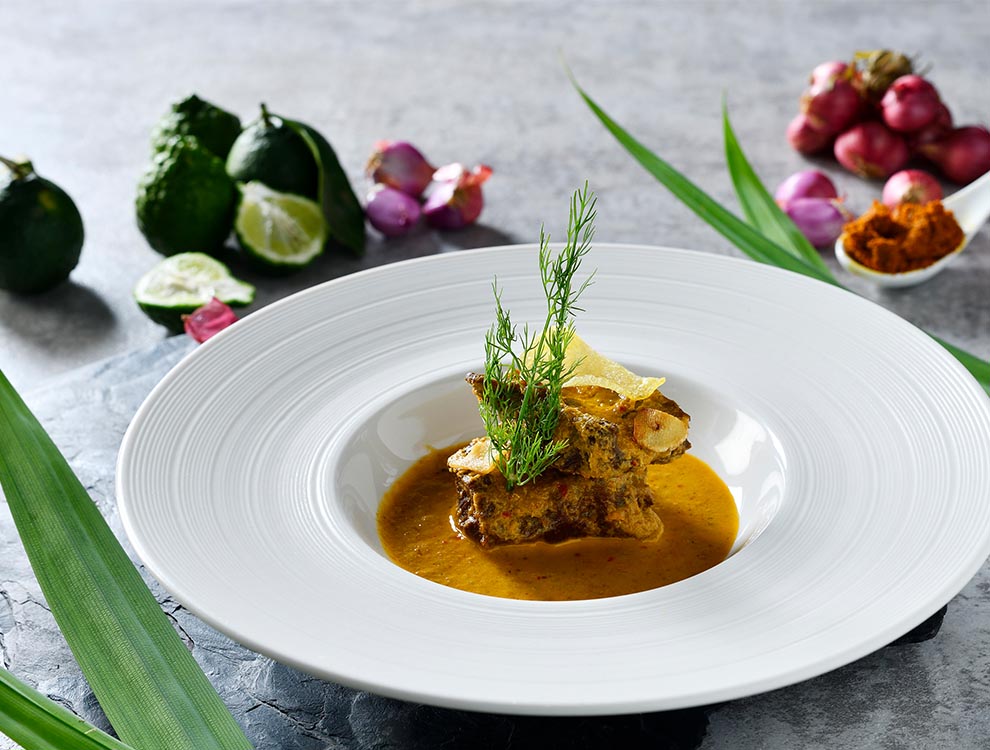 With more than 20 years’ experience delivering the very best Thai dishes, Chef Rin is trying to keep traditional recipes alive and maintain the standard of the cuisine’s original taste which can be difficult to come across in other restaurants, even in Bangkok. The celebrated and award-wining Bangkok establishment-Celadon serves an extensive menu of authentic Thai dishes, including homemade steamed rice dumplings, baked snow fish, and sweet coconut milk sticky rice with mango sorbet, in elegant air-conditioned Salas overlooking a lotus pond, and has become a firm favourite with both locals and international visitors alike. 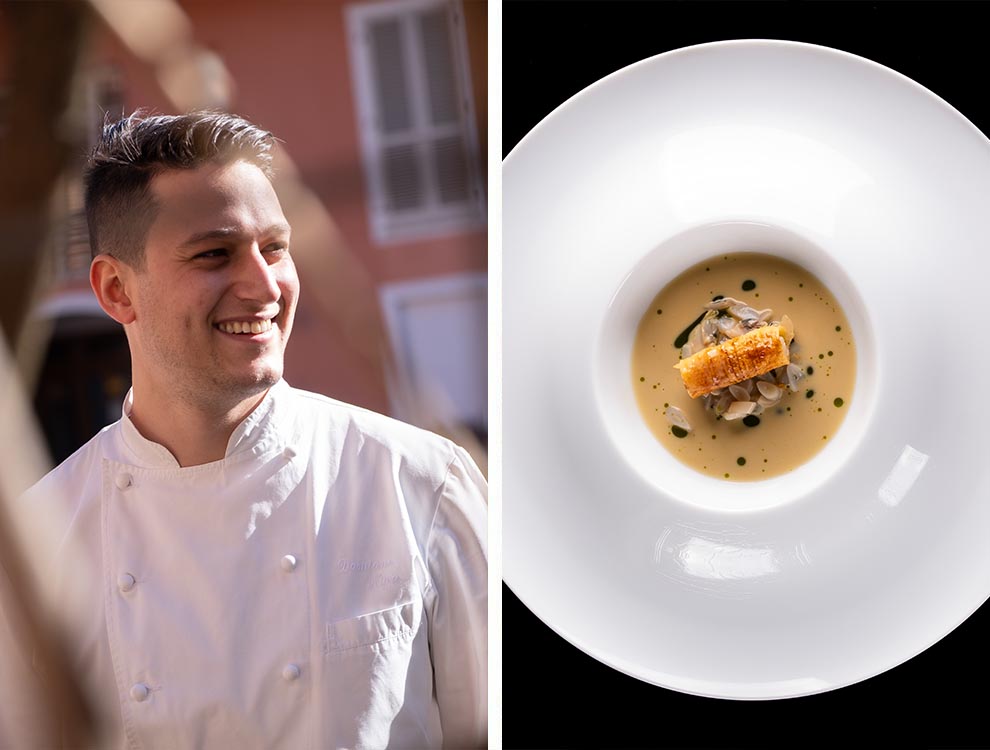 The recently renovated DaMà at 19th century country house hideaway Relais Villa d’Amelia is now under the watchful eye of Head Chef Dennis Cesco, who began his professional career at the age of 16, starting from the humblest roles in the kitchen team, up to supporting some of the most famous international chefs – from Chef Alain Solivérès at two Michelin-starred Le Taillevent, and Yannick Alléno at the three Michelin-starred Pavillon Ledoyen, to Christoph Pelé at two Michelin-starred Le Clarence. In Italy he became the favourite pupil of Chef Damiano Nigro who recently passed him the apron for the villa’s restaurant in 2021. 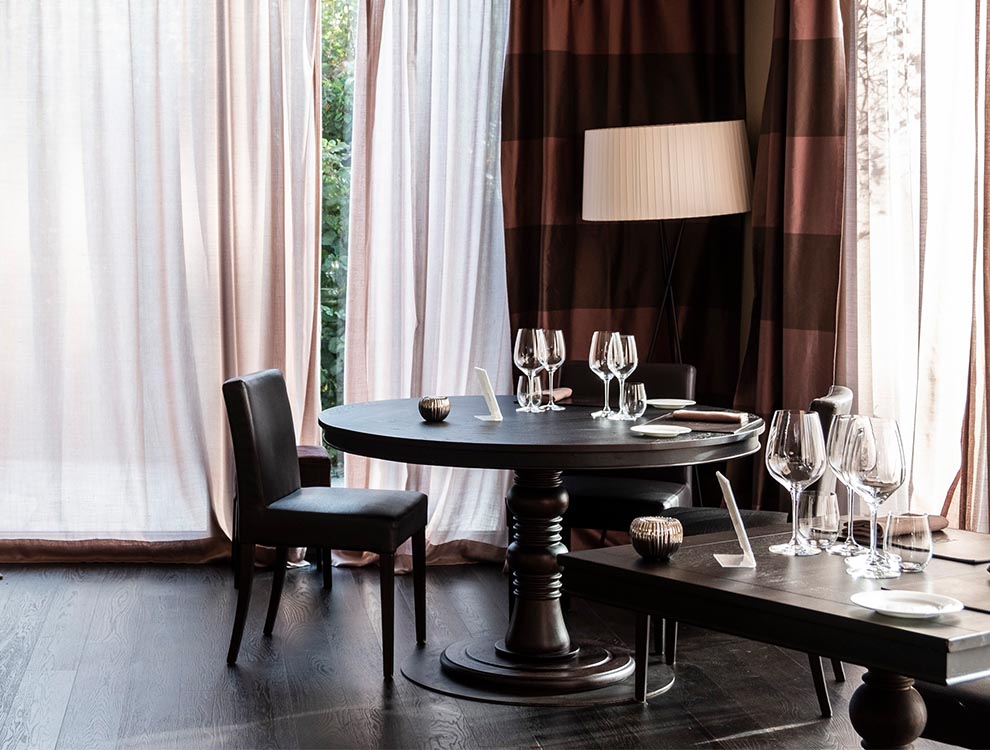 Dennis constantly searches for excellent raw materials and local ingredients from farmers, breeders and shepherds in the fruitful Land of Alta Langa. Dennis specialises in hand-drawn pasta made from carefully selected local flours, in keeping with ancient techniques and traditions of Piedmont such as cooking the majority of his dishes directly over a fire.

Though Jean-Georges Vongerichten is one of the world’s most famous chefs, his skills extend far beyond the kitchen. A savvy businessman and restaurateur, Jean-Georges is responsible for the operation and success of 40 restaurants worldwide – including the Jean-Georges at Topping Rose House, a renovated 19th century mansion near Long Island’s eastern shore. His menu champions produce from local fishermen and farmers, and the hotel’s one-acre farm makes sure each dish is fresh and seasonally inspired.

Born and raised on the outskirts of Strasbourg in Alsace, France, Jean-Georges’ earliest family memories are of food. He began his training in a work-study program at Auberge de l’Ill as an apprentice to Chef Paul Haeberlin, then went on to work under Paul Bocuse and Master Chef Louis Outhier at L’Oasis in southern France. With this impressive three-star Michelin background, Jean-Georges travelled to Asia and continued his training at the Oriental Hotel in Bangkok, the Meridien Hotel in Singapore and the Mandarin Hotel in Hong Kong. 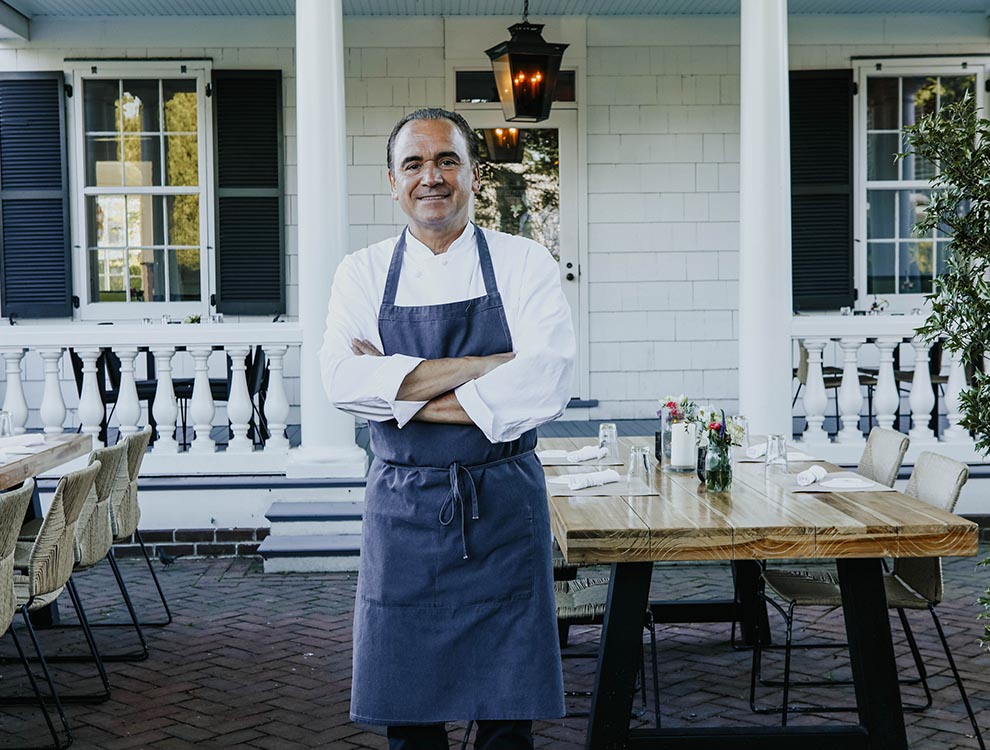 It was during this time spent working and travelling throughout Asia that Jean-Georges developed his love for the exotic and aromatic flavors of the East. His signature cuisine abandons the traditional use of meat stocks and creams and instead features the intense flavors and textures from vegetable juices, fruit essences, light broths, and herbal vinaigrettes. Jean-Georges’ culinary vision has redefined industry standards and revolutionised the way we eat.

Jean-Georges is involved in every aspect of his restaurants – concept, menu, architectural design, staff selection and trainings – in an ongoing effort to create restaurants that are both timely and enduring. Inspired by his travels, Jean-Georges is constantly developing fresh concepts and evolving as a chef and restaurateur, both adapting to and impacting the global culinary landscape. After years of success, Jean-Georges’ favourite retreat is still the kitchen, and his favourite meals dished from a street cart in Thailand. 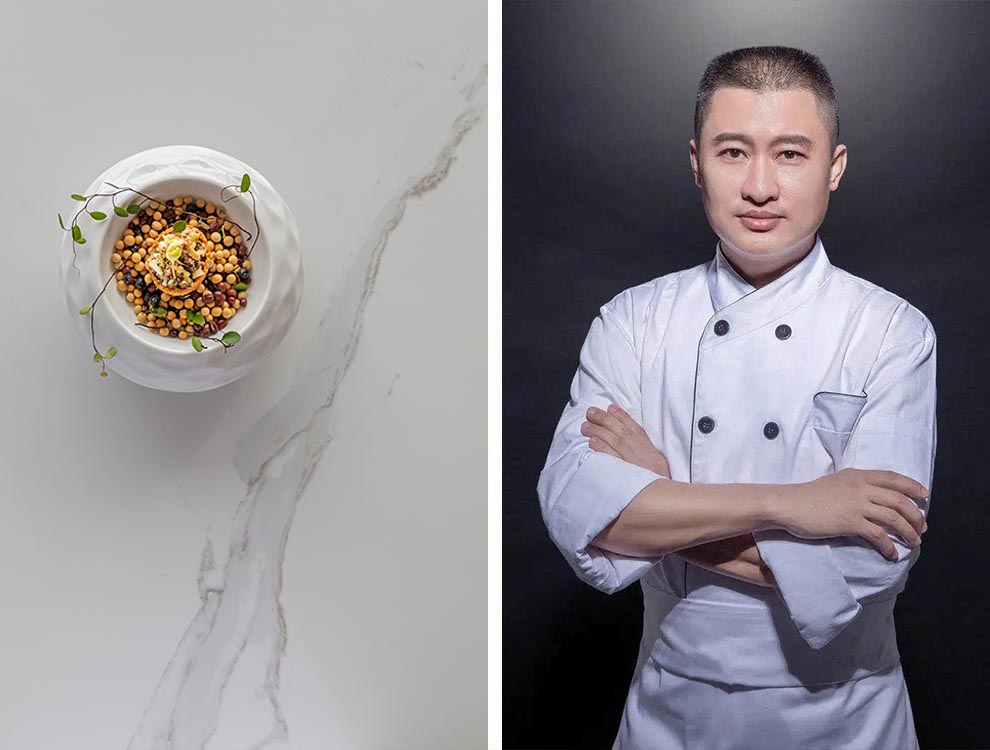 Native Cantonese Chef Bob Wu developed an interest in food from an early age while he watched his mother in the kitchen. Now heading up Tea 5 at LN Hotel Five with sumptuous dishes that celebrate the region’s rich trading history, Bob has perfected the art of Cantonese gourmet by introducing the best homemade dim sum and a wide selection of authentic Cantonese dishes. To the people of Guangzhou, having tea and dim sum is a pastime and a passion. The custom of having one pot of tea accompanied by two small plates of dim sum can be a simple or an elaborate ritual, served on meticulously selected Cantonese porcelain tea sets which reflect the city’s beautiful and delicate folk art at Tea 5. 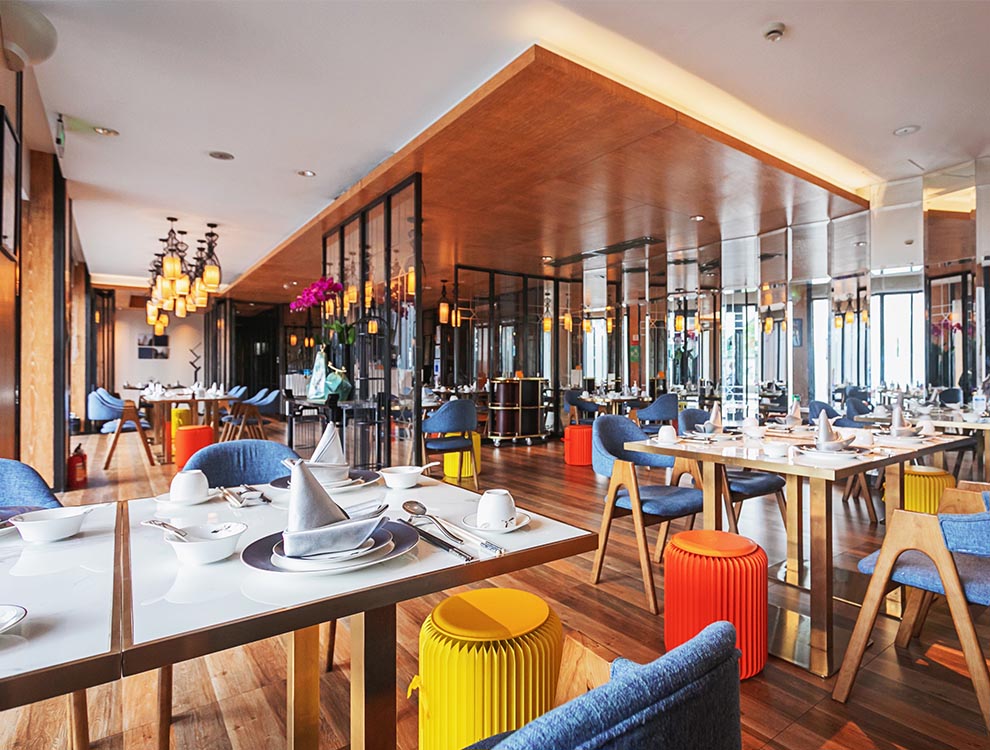 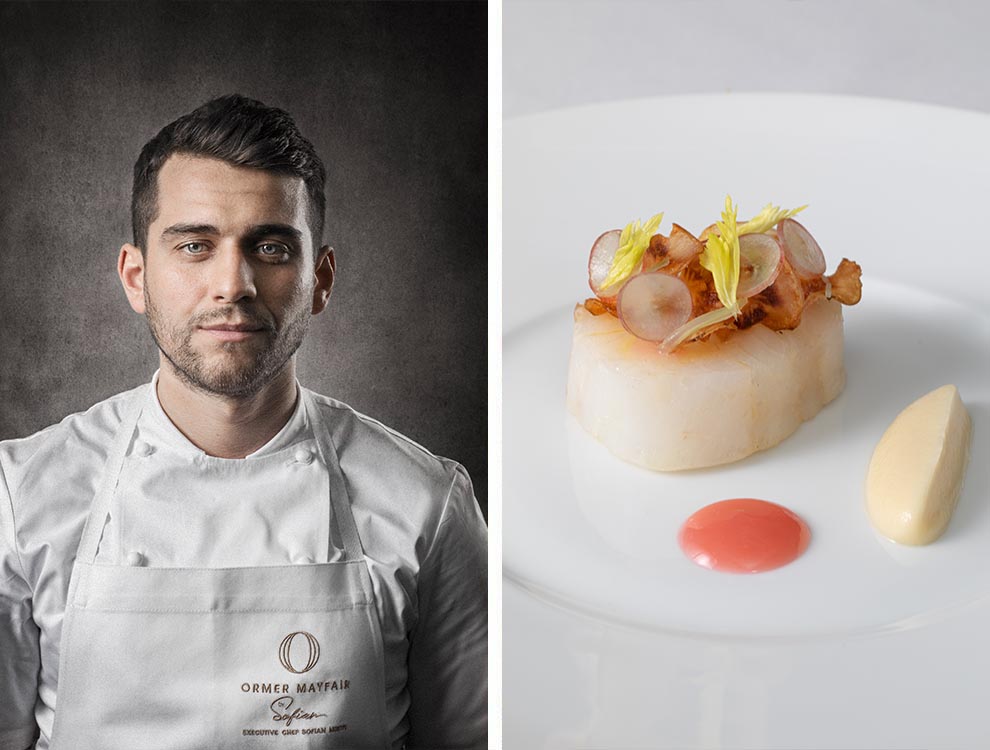 Bringing over 15 years’ experience to the table from some of the finest Michelin-starred kitchens in the UK and Ireland – from Adare Manor and The Hand & Flowers to Midsummer House – Sofian Msetfi has worked under the mentorship of renowned chefs including Tom Kerridge, Daniel Clifford and Paul Heathcote. 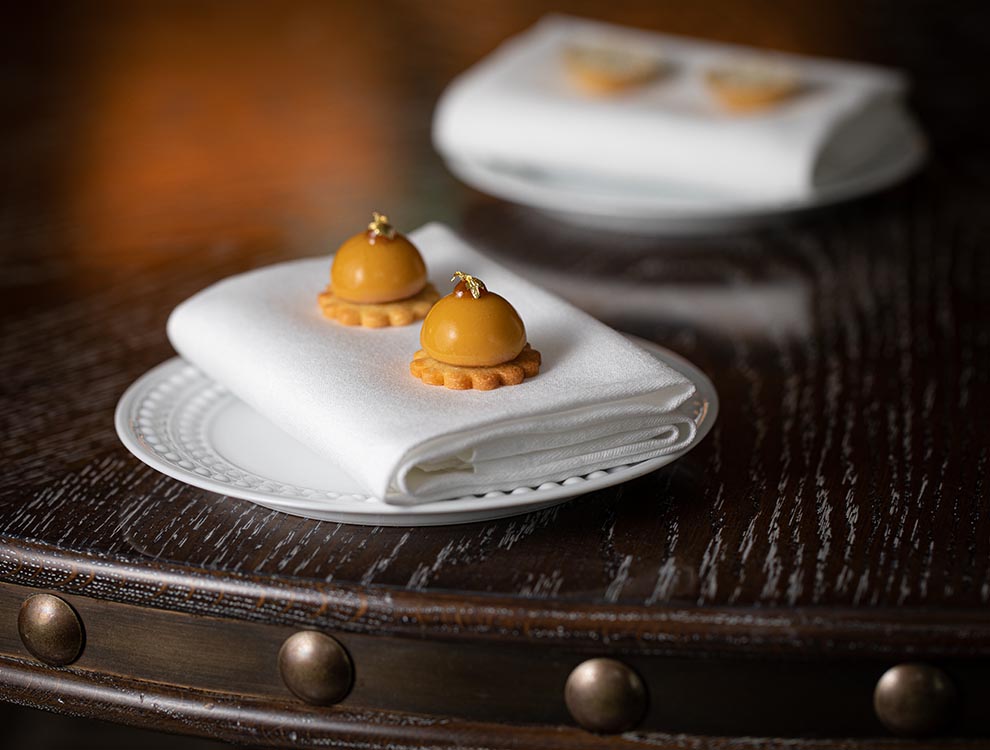