From ancient history to contemporary culture

Classical architecture and awe-inspiring archaeological sites. A thriving arts and crafts scene brimming with bold murals, pottery workshops, and antique markets. Europe’s original cultural capital, where you can walk in the footsteps of Aristotle and Plato, the cradle of Western civilisation is coming into full swing thanks to a new wave of creatives. Here’s what to see and where to stop in Athens when ticking off some of the world’s ancient wonders. 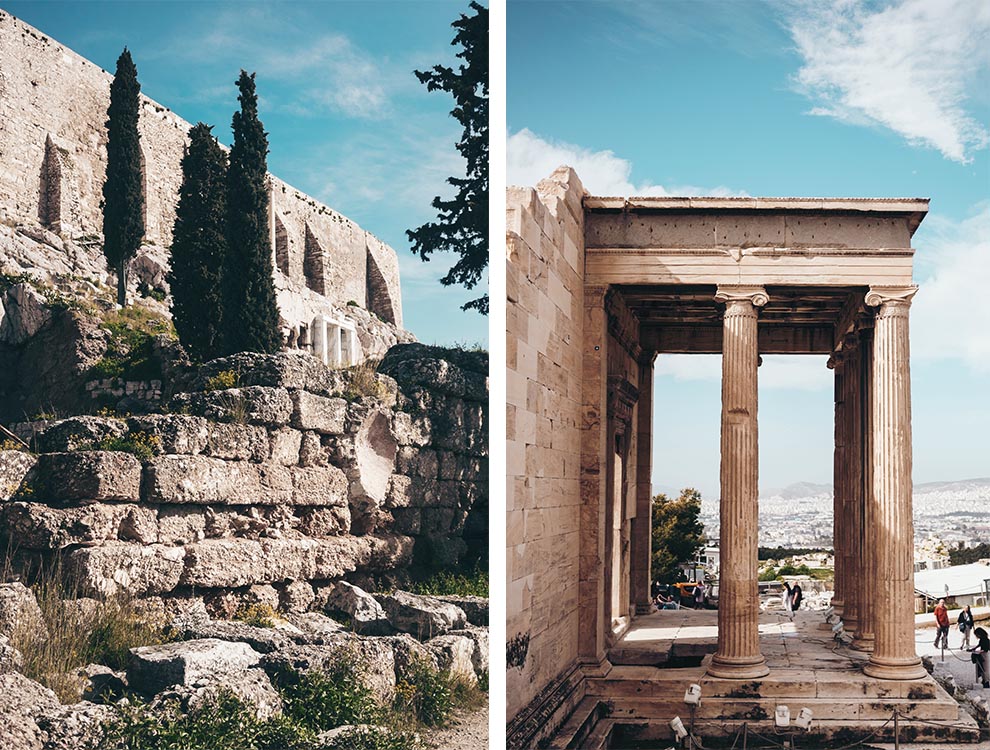 The Acropolis: The ancient Athenians knew how to make a statement when it comes to architecture, and this two-and-a-half thousand year-old citadel is as iconic as they come. Avoid the midday heat and beat the crowds by arriving first thing in the morning, when the Parthenon is bathed in a dusky glow.

Dionysiou Areopagitou Street: Walk like a local Athenian on one of the city’s most scenic promenades. The popular pedestrianised street lies at the bottom of the Acropolis, where you’ll pass by must-visit museums and archaeological sites as you stroll.

Monastiraki Square: Surrounded by the ruins of the Library of Adrianos, ancient Agora and the restored Hall of Attalos, Monastiraki Square is the city’s bustling hub after Syntagma Square. Just a few steps away in the small Avissinia down a jumble of narrow streets, a treasure trove of antique stores and artisan boutiques awaits at the local Giousouroum flea market, best frequented on a Sunday morning.

Plaka: Said to be the Neighbourhood of the Gods, this village-style medley of cobblestone streets, listed mansions, and traditional tavernas is clustered around the northern and eastern slopes of the Acropolis.

… and a longer look at Athens’ lesser-known spots

You’d be forgiven for thinking you’ve stumbled upon a Cycladic island village when wandering the pretty neighbourhood of Anafiotika. White-washed, cubic buildings with brightly painted shutters, rooftop patios overspilling with bougainvillea, and narrow streets lined with potted plants sit beneath the north-eastern side of the Acropolis as its hidden gem, which takes its name from its 19th century island makers, the craftsmen from Anafi commissioned under Ottoman rule. 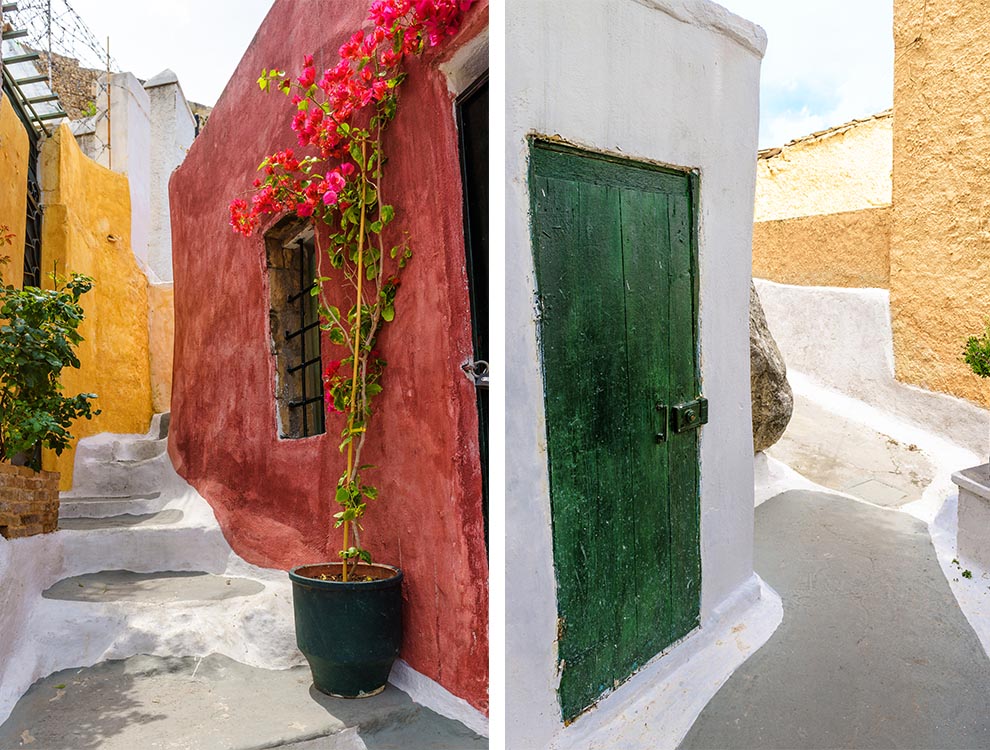 Breathing in some culture

Translating as ‘winds’, the small district of Aerides is home to a magnificent marble clocktower, otherwise known as The Tower of the Winds. Sip on some salepi, a traditional warm healing brew, while you drink in some of the best views of the Acropolis from the benches on the small cobblestone square in front of Aerides.

Pack your walking shoes, the Philopappos Hill is well worth the olive scented climb. From its rocky summit, the city of Athens will unravel before your eyes. A postcard-worthy spot for a picnic or to watch the sun set over historic monuments fringed by pine trees, this is a local favourite during the spring and summer months for its beautifully landscaped parklands and stone pathways.

What – and where – to eat in Athens

Serving up some of the city’s best fresh chargrilled fish and grilled octopus, the catches of the day at Ithaki Restaurant in Vouliagmeni are accompanied by the sound of waves and views of the Athenian Riviera.

Baked eggplant with feta, meaty, smokey souvlaki, Cretan dakos salad, meatballs in tangy tomato sauce, juicy black olives, creamy tzatziki, and so much more…No matter which taverna you choose, the meze is an absolute must. These Greek-style sharing tapas dishes mean everyone has a chance to try a little bit of everything. If you’re vegan, ask for “ladera” options.

Humungous helpings of hummus generously dolloped on fluffy white pita bread, with a refreshing side of olive-oil drizzled salad. In the heart of Plaka stands the bubbly and lively Ippitou street, known for its mouth-watering street-food corners and vibrant array of local cuisine. 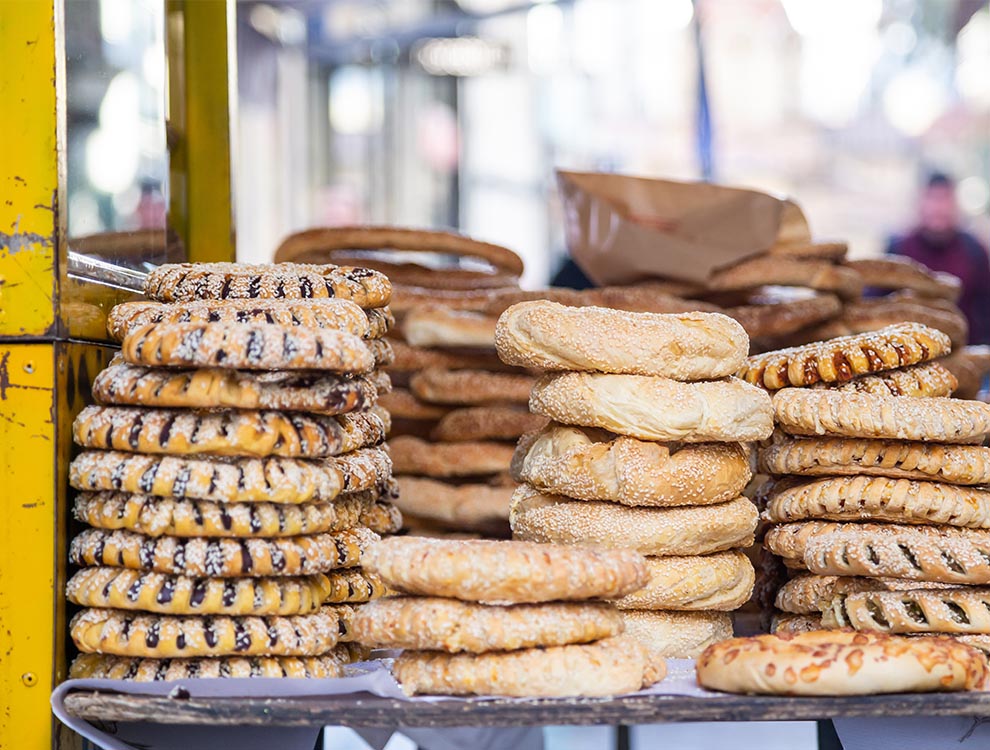 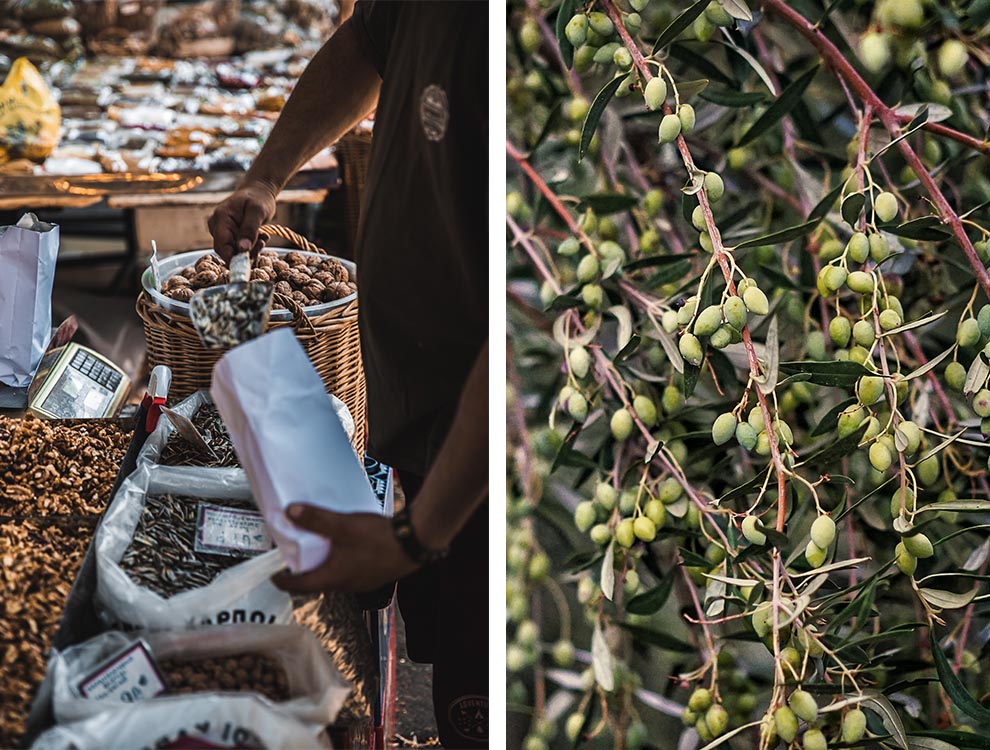 You’d be hard pushed to leave Greece without trying baklava, a syrup soaked, honey infused dessert of layered filo pastry. Available in most bakeries throughout the country, the capital’s best comes from the legendary Belle Vue in Nea Smyrni. Owned by two Greek families for nearly half a century, who were originally based in Istanbul, the pistachios from the island of Aegina sprinkled in the Turkish-style baklava kuru are undoubtedly their secret ingredient.

Acropolis views and Aegean blues: where to stay in Athens

When it comes to boutique hotels in Athens, it’s a choice between city break chic or riviera retreat:

A77 SUITES BY ANDRONIS… a subtle blend of Hellenic charm and modern minimalism, this recently restored 19th century listed neoclassical building basks in the Acropolis glow and is just steps from the start of civilisation. 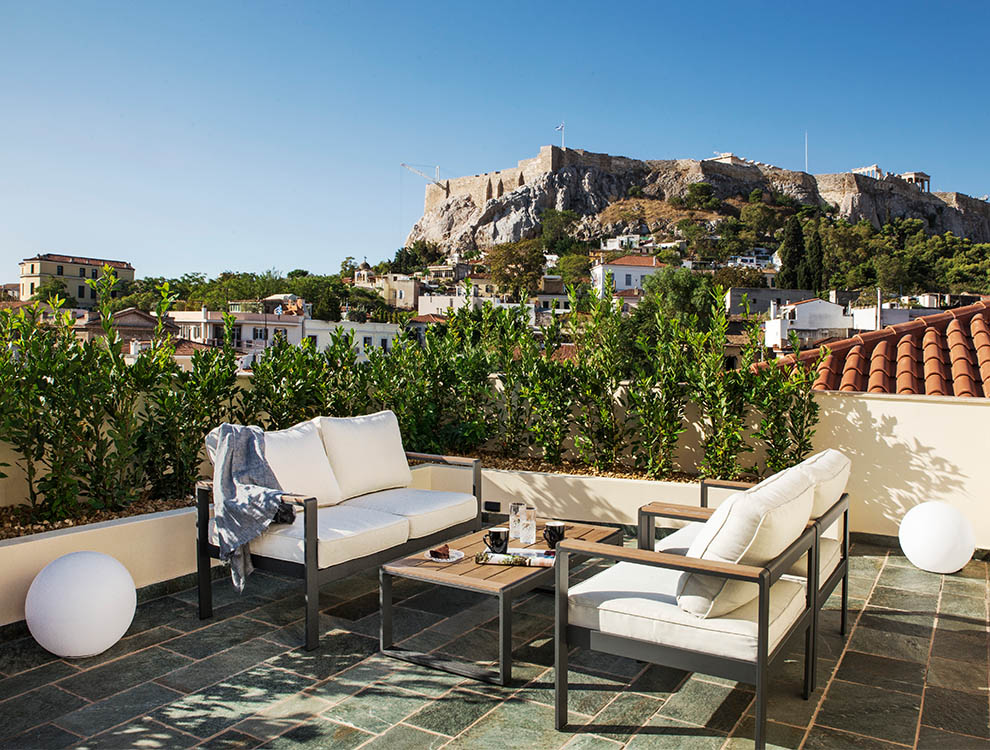 THEOXENIA PALACE…enjoy a freshly prepared lunch of Greek delicacies by the pool in the height of summer, after working up an appetite exploring the stylish Kifissia, renowned for its designer boutiques, trendy cafes and bars. 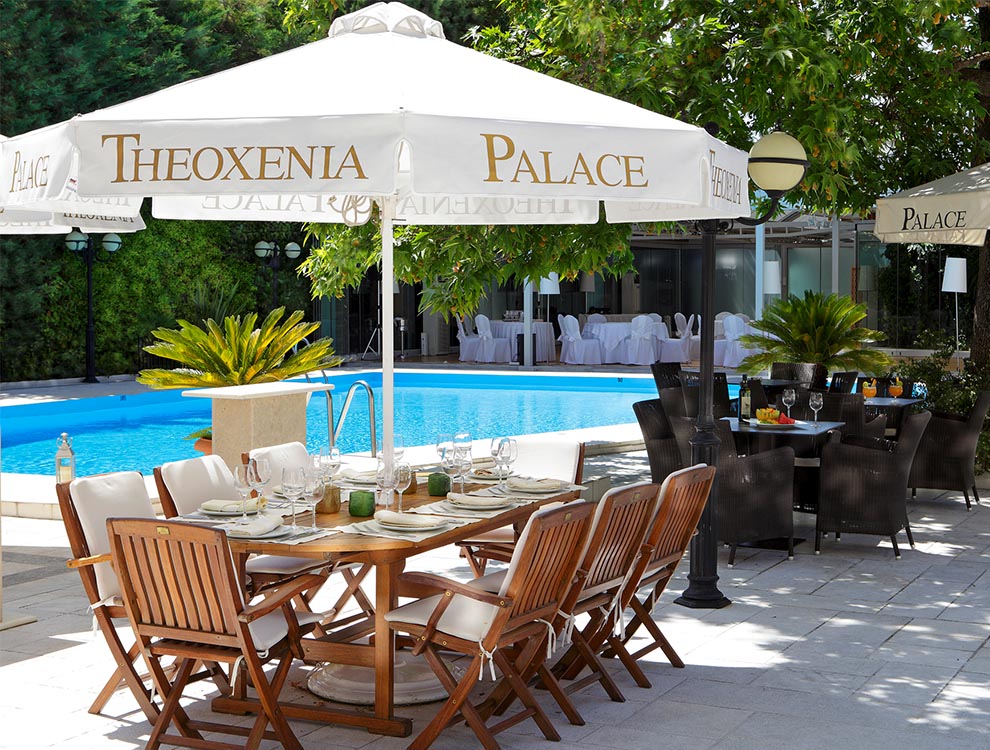 THE MARGI…offering the best of both worlds, this seaside haven is just minutes from the beach yet close enough for city exploring. Relax beside the pool overlooking a gloriously blue bay with a yacht marina after a day of sightseeing. 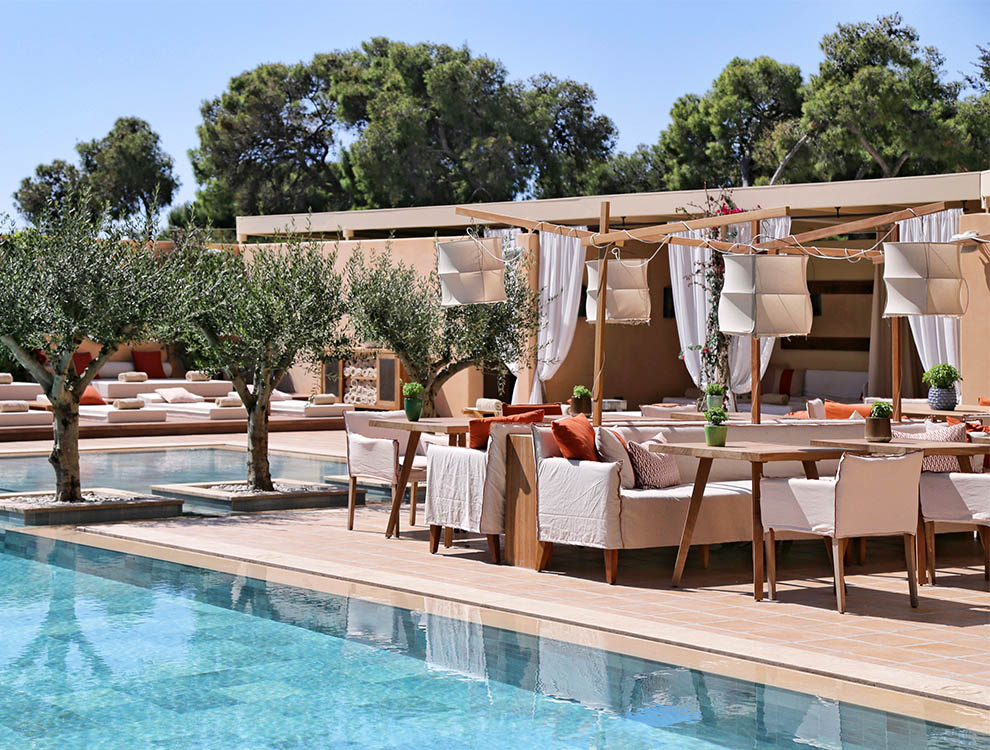 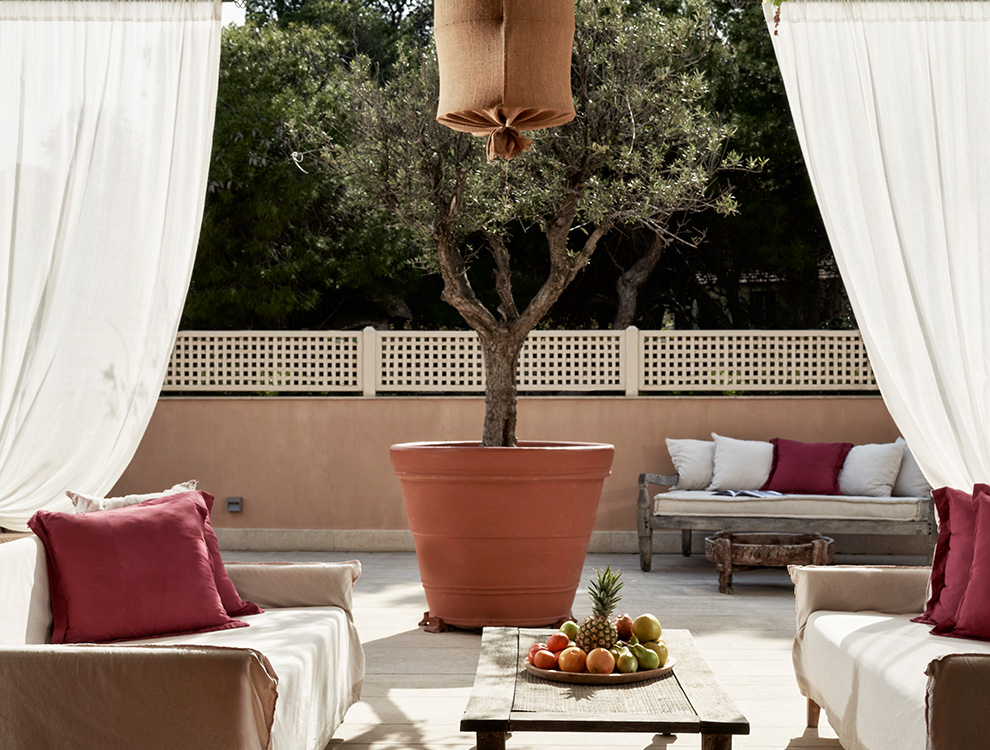