A portal into the past, Rome is an architectural treasure trove of ancient wonders and modern day delights. The light throughout this millennia-old metropolis is simply magical – a peachy glow radiates from the history-etched walls and art-laden churches of the Eternal City, home to pretty piazzas where elegant Italians watch the world go by over countless cups of coffee, and traditional trattorias which spill out onto labyrinthine streets. Instead of skipping the tourist traps, we recommend waking up early to beat the crowds and watch the sun rise over the city’s majestic monuments. 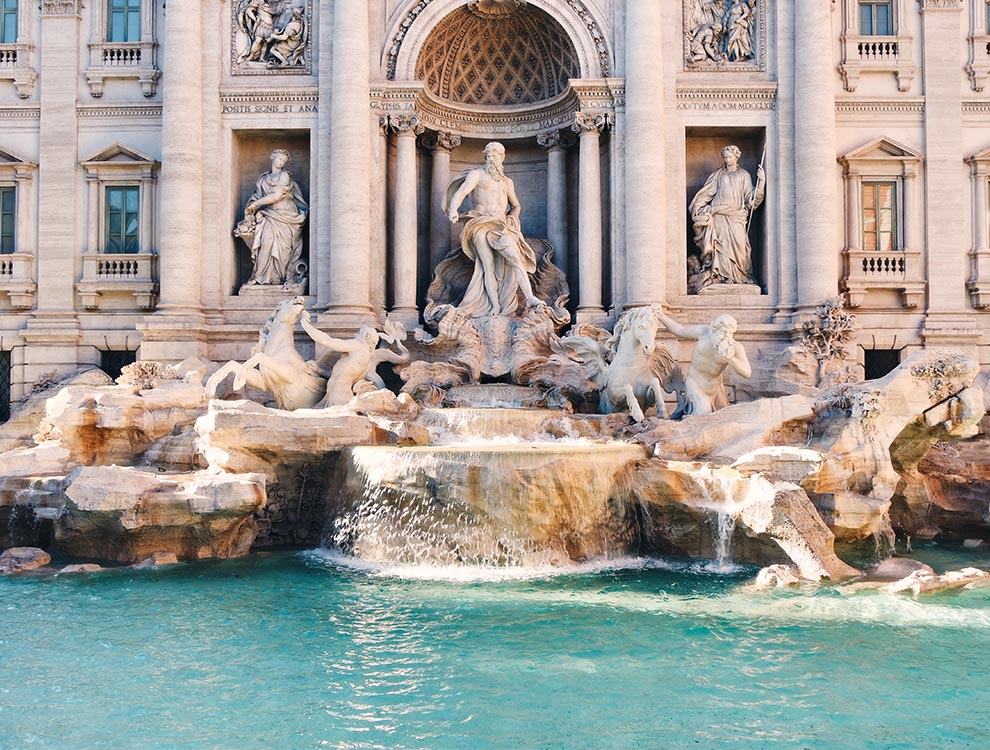 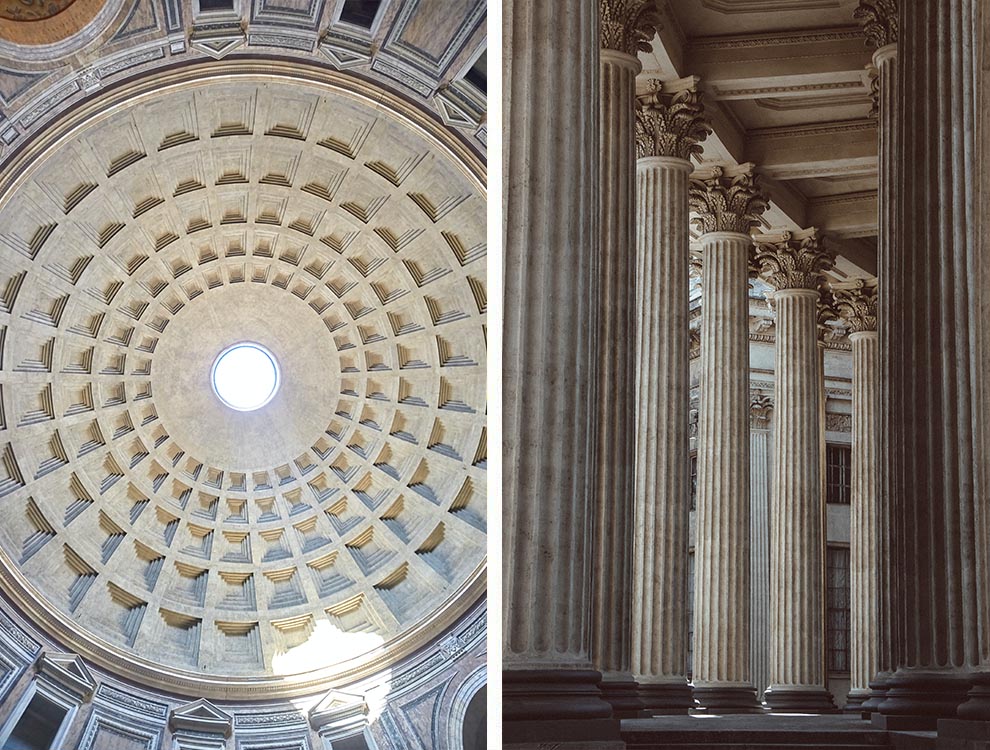 Colosseum: One of the seven wonders of the world, and Rome’s most photographed building, this ancient amphitheatre is awe-inspiring every time you visit. For an alternative angle, head up to the Giardinetto Del Monte Oppio.

Forum Romanum: Once the centre of the Roman empire, this showstopping sprawl of archaeological ruins is nestled between the Palatine and Capitoline Hills, where today’s visitors can follow in the footsteps of Julius Caesar and other legendary figures of Roman history.

Trevi Fountain: Europe’s most iconic fountain needs little introduction. Before you leave, be sure toss a coin into its bubbling waters – legend says you’ll return to Rome if you do.

Pantheon: Dedicated to the gods of ancient Rome, you cannot help but feel humbled when standing beneath the oculus of this beautifully preserved temple. 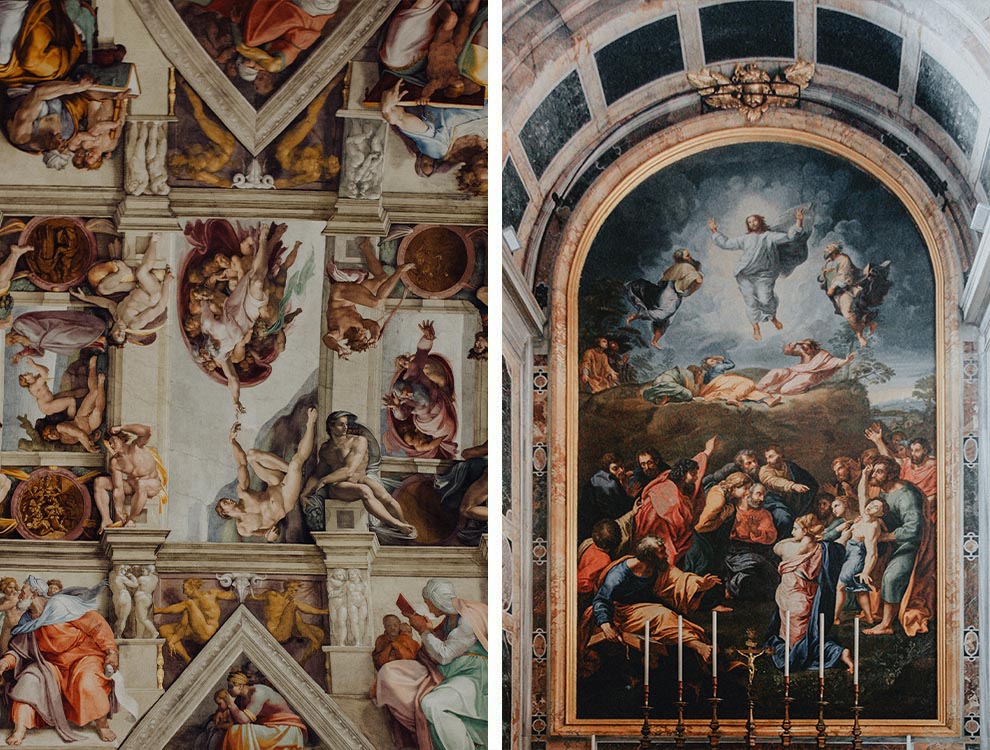 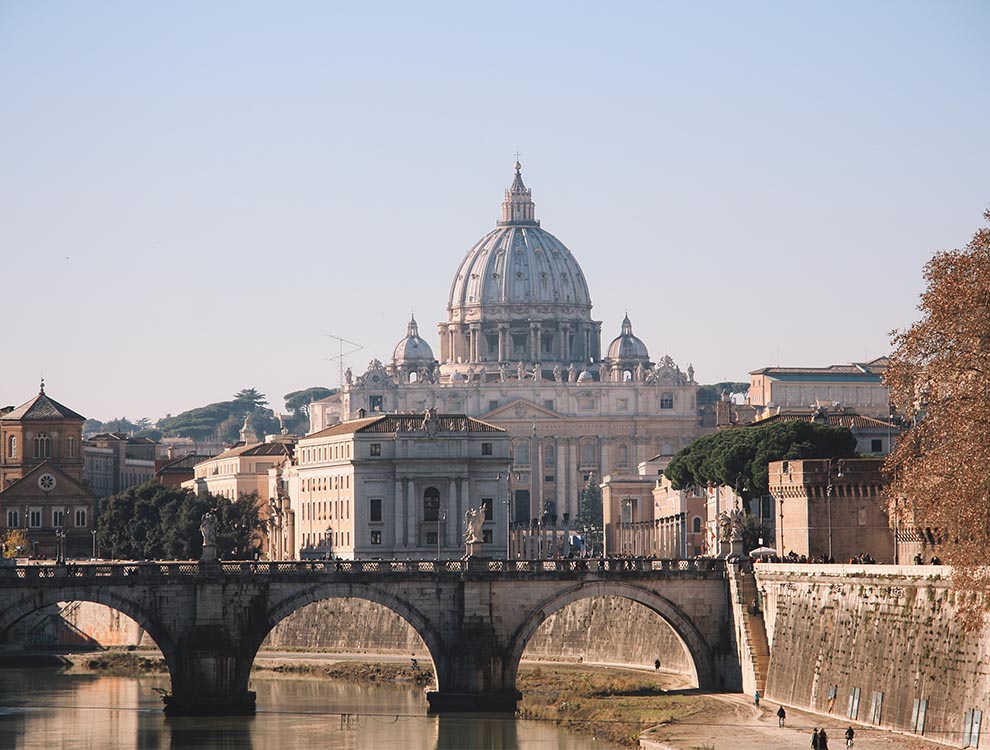 Sistine Chapel: The Vatican’s crown jewel, and quite possibly the world’s most famous frescoed ceiling. If you want to admire Michelangelo’s handiwork without queuing for hours in the sweltering heat, be sure to book skip-the-line tickets ahead of your visit.

Castel Sant’Angelo: Owing much of its fame to the film adaptation of Dan Brown’s Angels & Demons, this towering mausoleum-turned-fortress stands at one end of the breath-taking Bridge of Angels.

Piazza Navona: A Baroque masterpiece brimming with street art stalls, gelaterie, and spaghetti-serving eateries, this popular square is best enjoyed after dark when the sparkling fountains are illuminated.

Galleria & Villa Borghese: Wrapped up in beautifully landscaped gardens is one of the largest private art collections in the world – Caravaggio, Rubens, da Vinci. Need we say more? 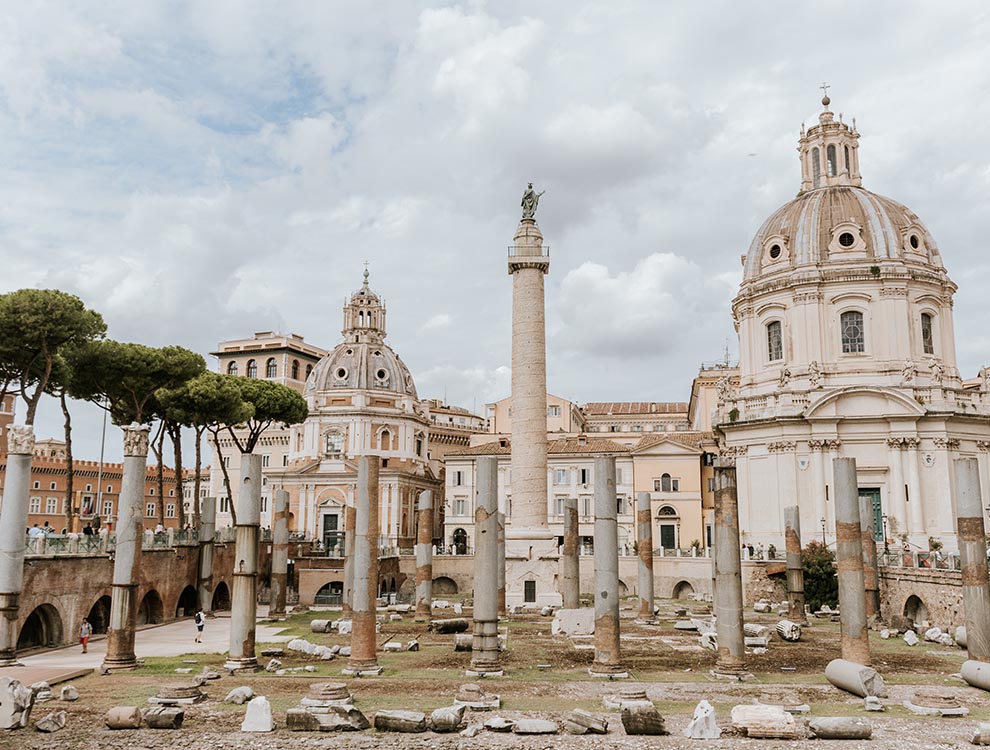 St. Peter’s Basilica: Renaissance architecture at its finest, this place of pilgrimage is topped by the tallest dome in the world. Follow the jasmine trail for a romantic stroll along an old railway for fragrant views of the basilica.

Via dei Condotti: High spending shoppers and window-dreamers alike can be found peering into the glittering boutiques which line Rome’s most stylish street. Elizabeth Taylor famously spent many hours in the Bvlgari store while filming Cleopatra.

…and a longer look at Rome’s lesser-known spots 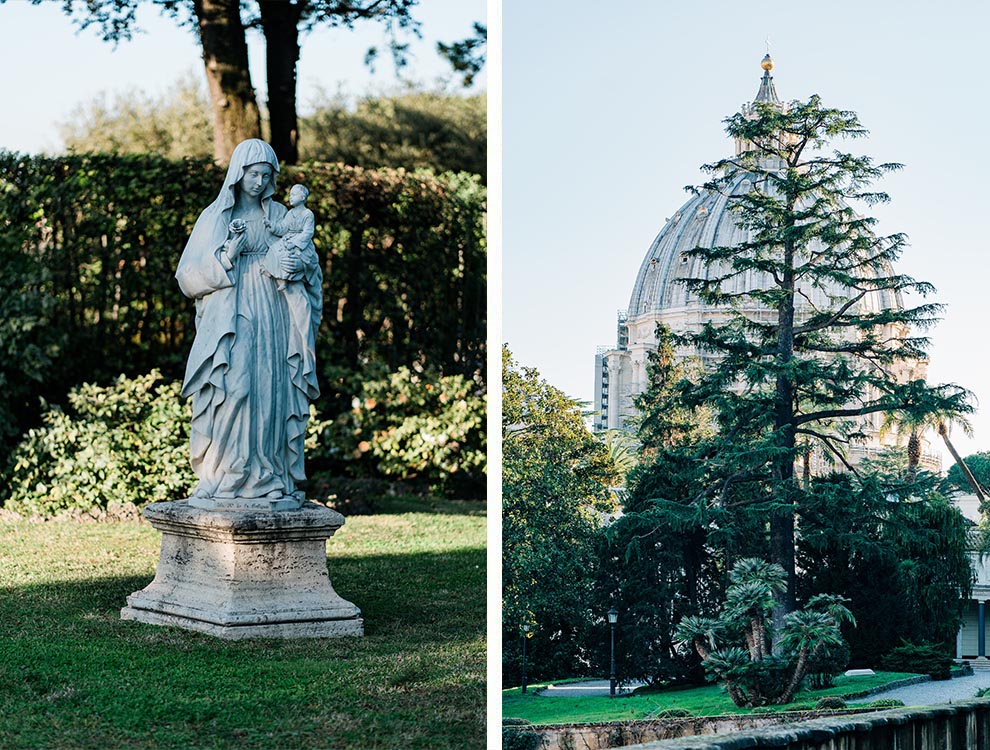 Spread over 57 Renaissance-styled acres, the Giardini Vaticani are one of Rome’s most surprising and exclusive outdoor spaces. Thanks to their limited-entry policy, these manicured grounds are never crowded and feel a world away from the bustle of the city – yet boast some of the best views of St. Peter’s Basilica dome. Stroll through sculpture-lined grottos and shaded walkways, past bubbling fountains where resident turtles cool off from the heat, and glimpse the sacred olive tree and papyrus plant on display as part of the gardens’ curated collection. 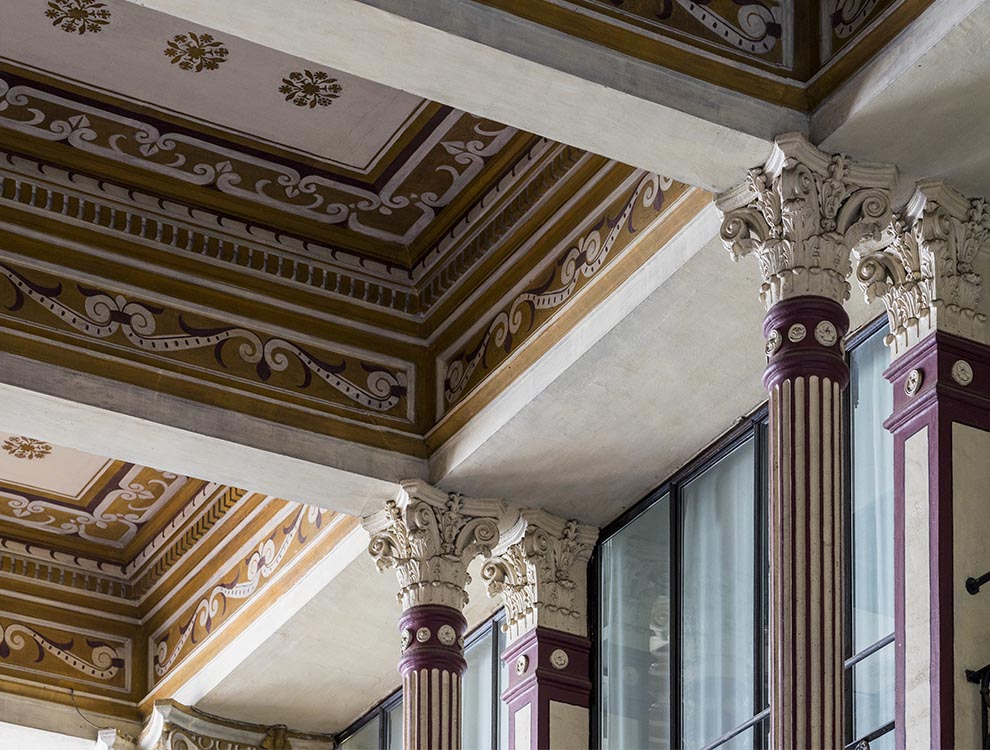 Just moments away from the Trevi Fountain buzz and the fashionable Via del Corso, Art Nouveau lovers should seek out the Galleria Sciarra – a relatively unknown courtyard which was built in the late 19th century for the influential Sciarra family. Covered in colourful frescoes painted by Giuseppe Cellini which celebrate women and motherhood, the ceiling of this quiet spot has been cleverly constructed using glass and iron to let sunlight spill onto the artwork below, magnifying each and every detail with natural light. 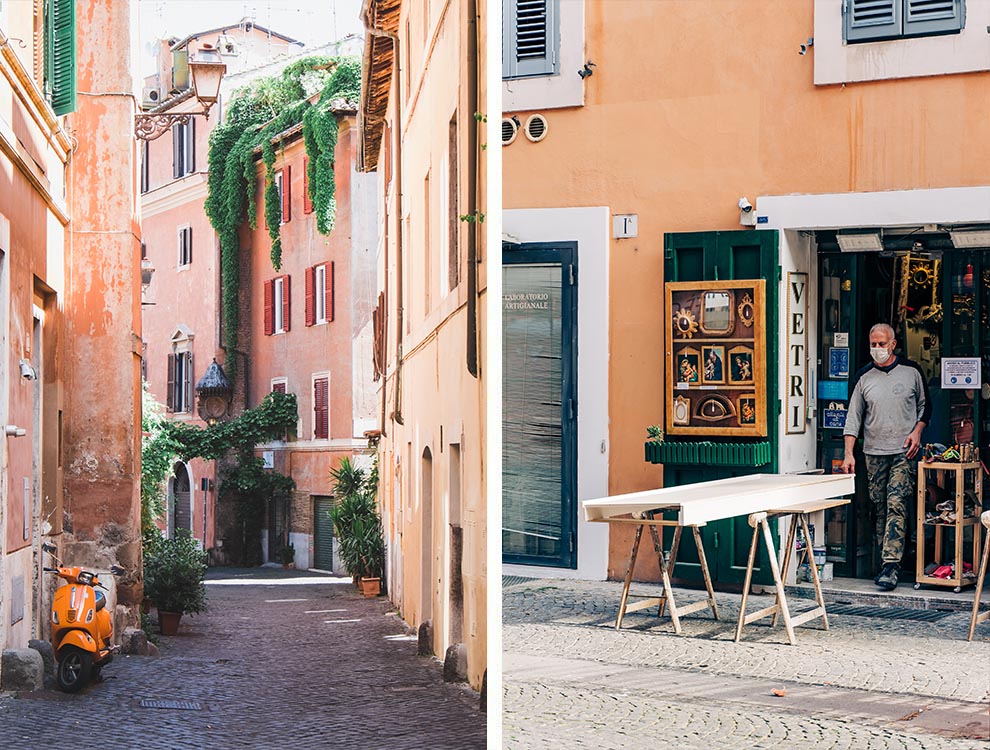 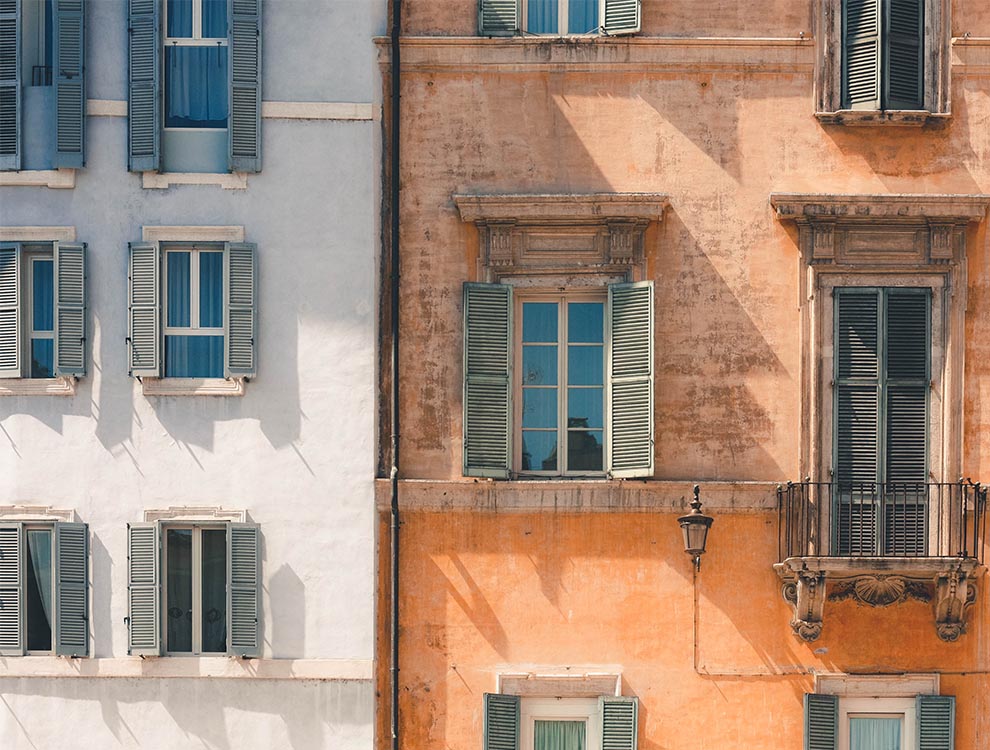 While locals and tourists flock across the Tiber to enjoy the lively nightlife of ever-trendy Trastevere, the secret side to this charming medieval neighbourhood can be discovered during the daytime. Endlessly photogenic and largely car-free, Trastevere is a bohemian tangle of apricot-hued buildings dripping in ivy, flower-filled balconies, and pretty cobblestoned streets with faded paintwork. Wind your way down peaceful lanes to Piazza di Santa Cecilia, where you’ll stumble across an ancient basilica fronted by a rose-encircled fountain. If you ring the bell, the nuns will show you Rome’s last remaining Cavallini frescoes from the 13th century. 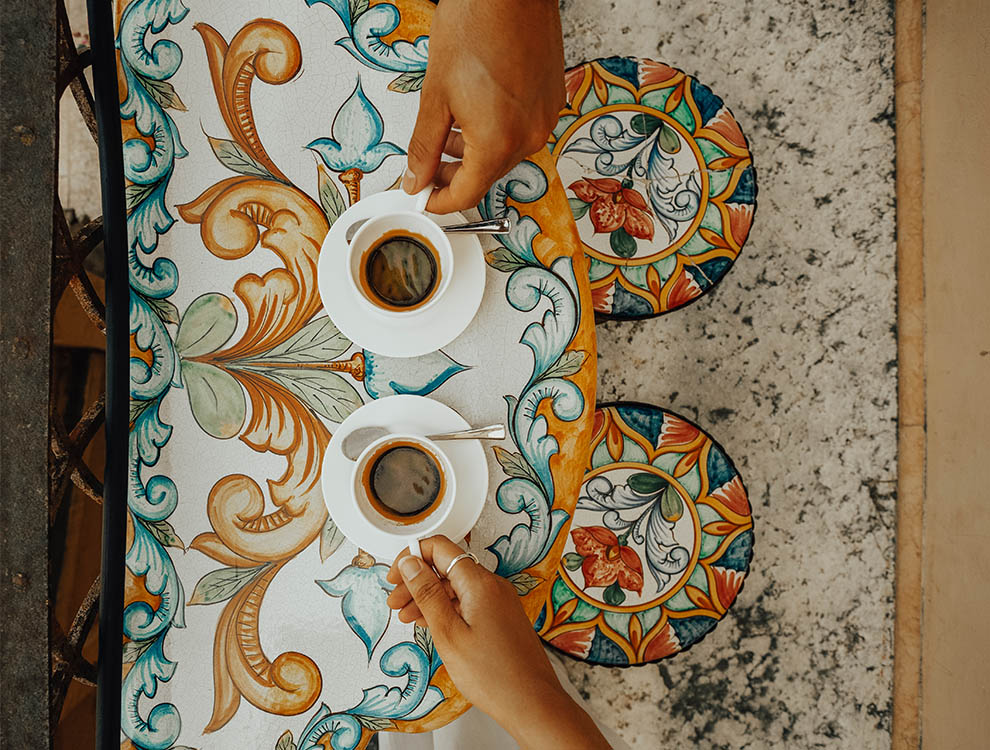 Keep your city break caffeinated the Roman way by heading to the bar (as coffee shops are locally known) first thing in the morning for an espresso or cappuccino. Sip your morning brew surrounded by marble statues and vintage photographs at Caffè Canova-Tadolini, the workshop and studio of neoclassical sculptor Antonio Canova turned museum-meets-café – avoid the pricey service charge by standing at the bar instead. For coffee in a more contemporary setting, Faro claims the title of Rome’s first speciality coffee shop, where homemade pastries are paired with delightfully delicate roasting. 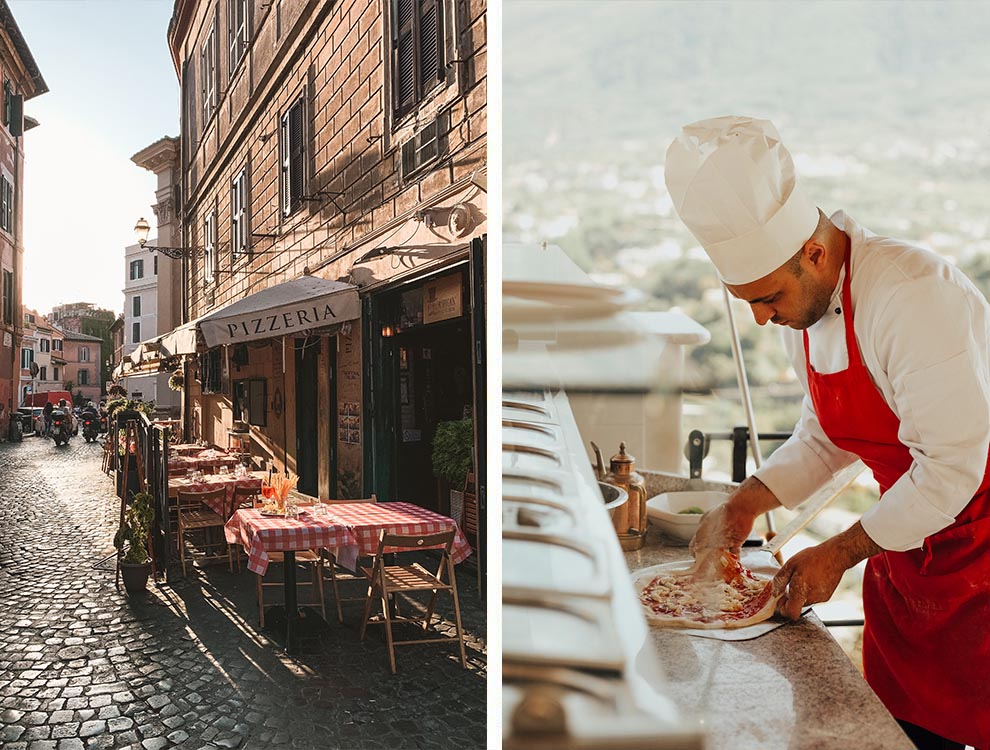 Roman or Neapolitan? While this dough debate can get heated, the Roman pizza celebrates a crispier crust and can be found in pizzerias throughout the city. Order al taglio (by the slice), or as it comes, with an array of toppings from the traditional to the unusual. Grab a kitchen counter table at Travestere’s Seu Pizza Illuminati to watch the chef in action as you tuck into hand-stretched gourmet pizza, or enjoy street-food style pizza on the go from Trapizzino’s five locations across Rome, which combine the tramezzino sandwich with a slowly-leavened pizza dough for a light bite like no other. 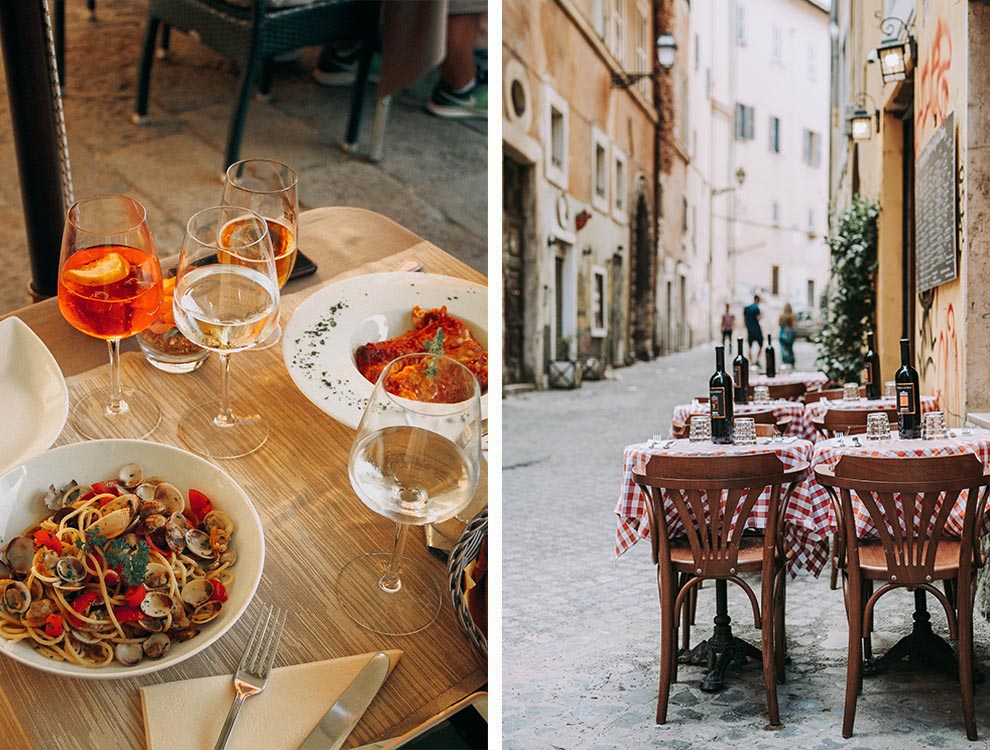 From carbonara to cacio e pepe, Rome has been dishing out classic pasta for centuries. While it’s difficult to go wrong when it comes to pasta in the Italian capital, some of our favourites include Mirabelle Restaurant’s beetroot tagliatelle sprinkled with crispy bacon and black truffle, and tagliolini with pumpkin and gorgonzola at Michelin-starred AROMA, which gives diners a front-row seat to the Colosseum. 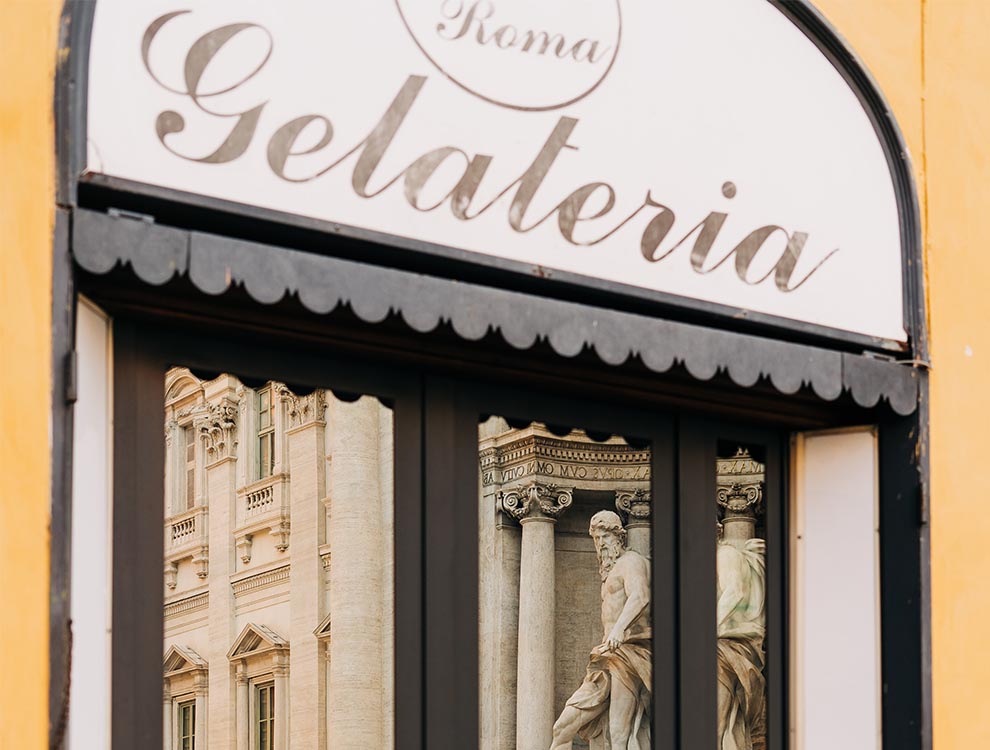 Did you even really visit Rome if you didn’t devour at least ten gelati? Rumours have it that Roman emperors demanded fresh snow be delivered from the mountaintops to their villas, which was then sweetened and served as an early version of ice-cream – and the standards are just as high in modern day Rome. For top-notch ingredients from local, small-scale producers, pop into Fiordiluna, while Gelateria Come il Latte guarantees at least three sugar-free, vegan-friendly flavours and cones each day. 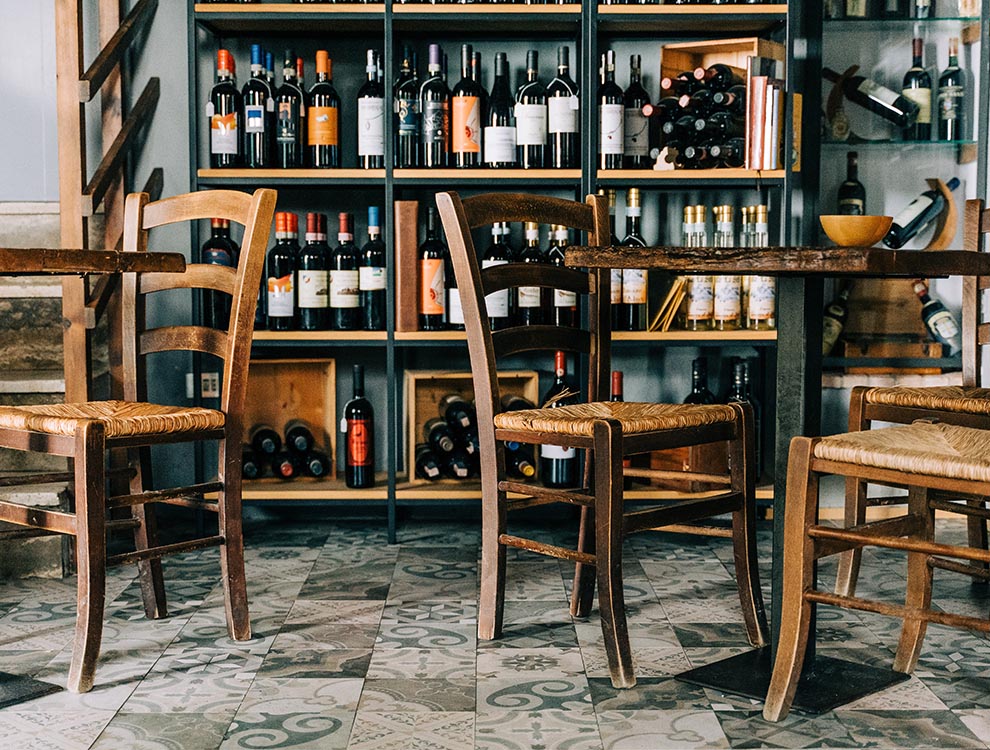 In vino veritas has never rung so true as in the wine bars of Rome, which source their grapes from the vineyards just south and east of the capital – Italy’s under-the-radar wine country of Lazio. The long wine list at local favourite Il Sorpasso wash down Italian comfort food from meatball sandwiches to chunky slices of parma ham, while Il Goccetto stocks over 850 wines and has an easy-going, party-throwing atmosphere which has been known to spill out onto the streets during the summer.

Where to stay in the Eternal City 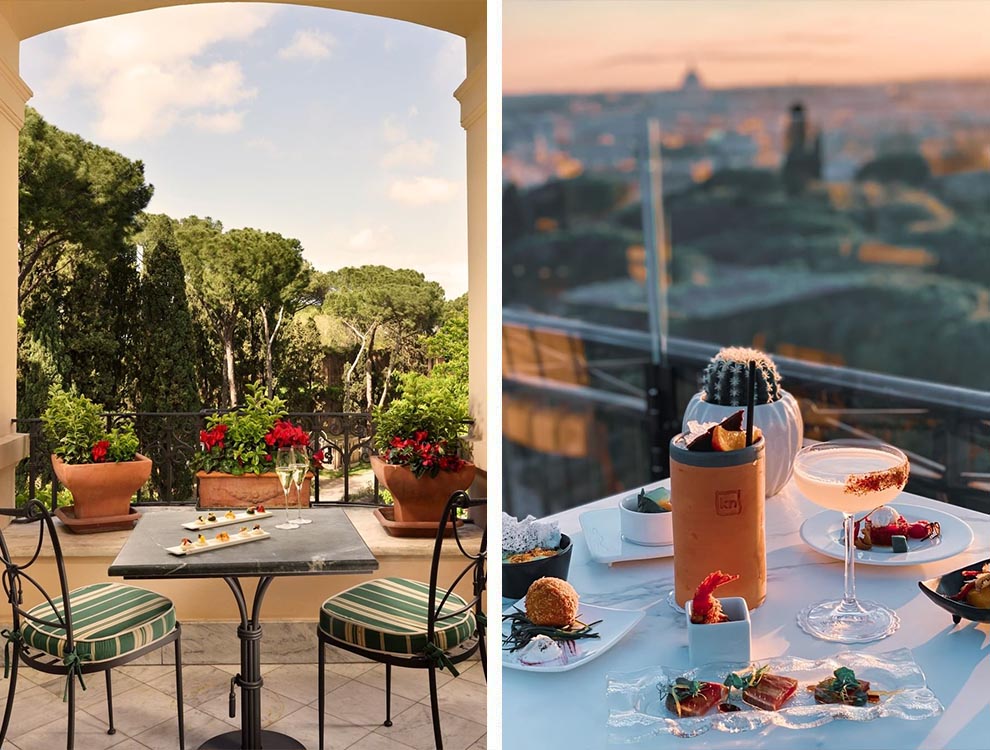 Magical views can be found at every turn at Hotel Splendide Royal – secure your spot on the brand new Adèle Mixology Lounge rooftop terrace (pictured right) to drink in the cityscape.

Hotel Splendide Royal…a 19th-century palace overlooking the Villa Borghese gardens, this sumptuously styled hotel puts guests in prime position for the Spanish Steps and the boutiques of Via dei Condotti – with sky-high dining and drinks options to boot.

Hotel Vilòn…Tucked away in a secret spot right next to Palazzo Borghese, this converted mansion oozes contemporary design and comes with gorgeous garden views and a destination cocktail bar.

Hotel De’ Ricci…a luxury townhouse tucked away down a smart cobbled street just off the Piazza De’ Ricci, with a staff composed of professional sommeliers and an extensive wine list of over 1,500 labels. 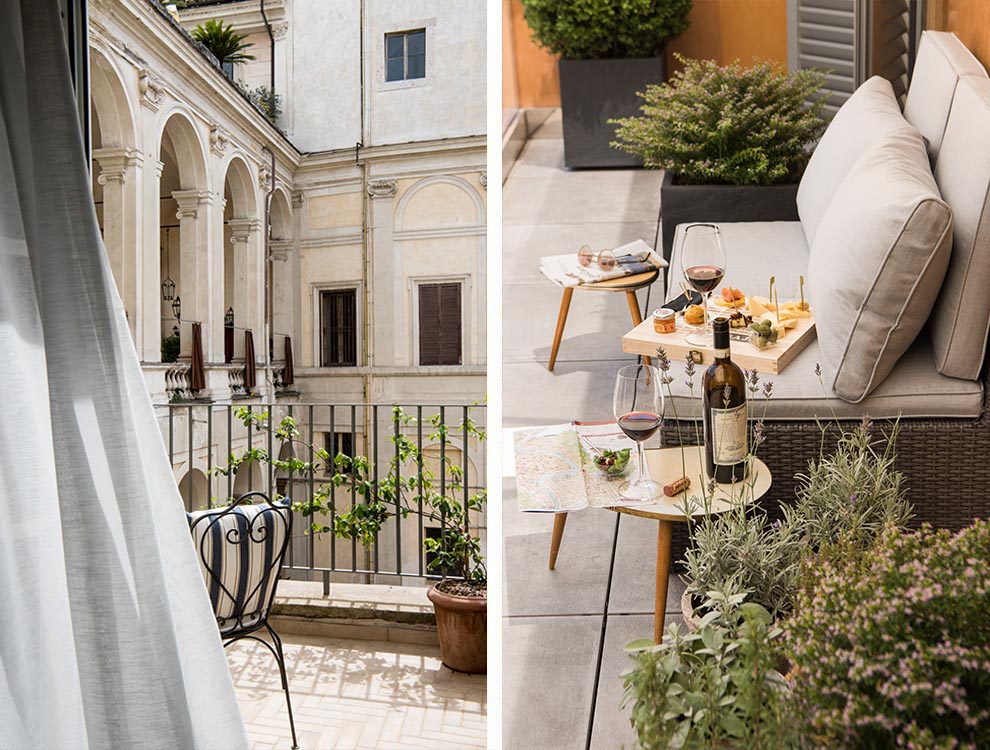 Soak up some Roman holiday sunshine from the balconies of Hotel Vilòn (left) or Hotel De’ Ricci (right).

Palazzo Manfredi…you’ll be sleeping next-door to the gladiators at this 17th century noble’s villa, which is directly across the street from the Colosseum – expect epic views from the light-filled rooms.

Palm Suite…whimsical, eclectic, and exotic, these design-centric Roman residences transport guests to somewhere tastefully tropical – and with the Colosseum and Forum for neighbours, the views are rather special too. 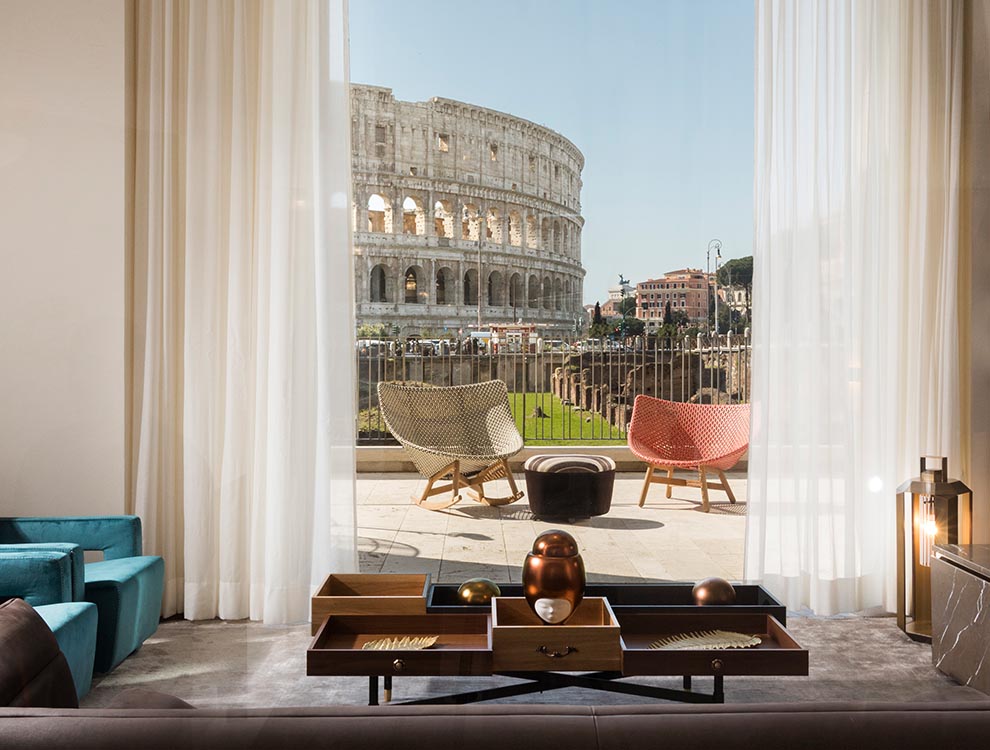 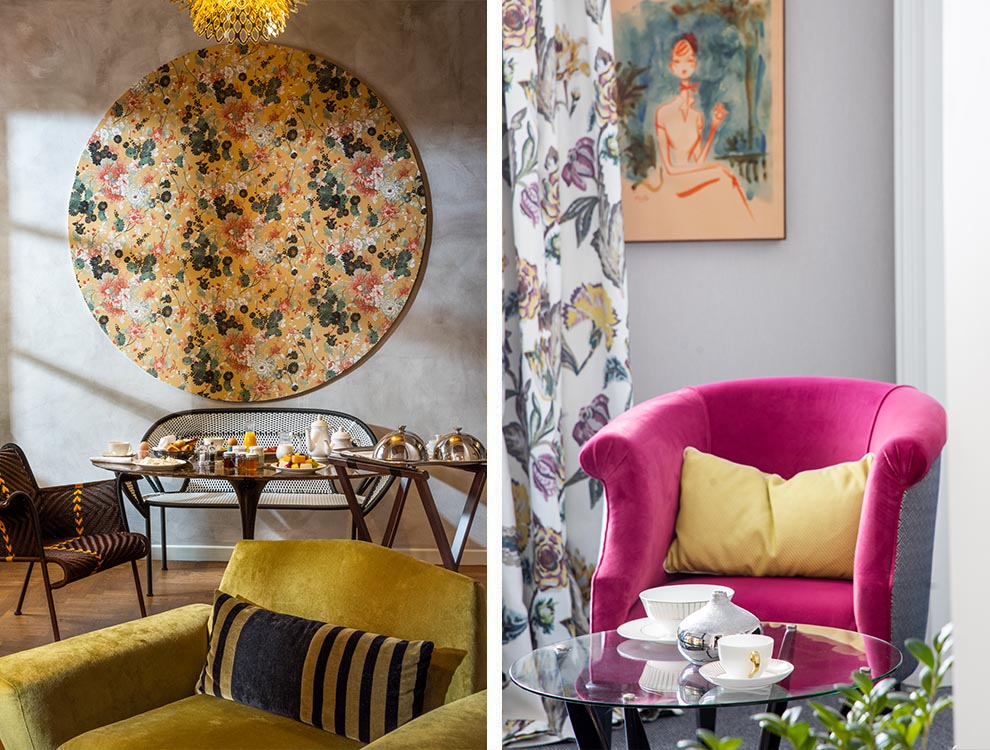 Bid the Colosseum “buongiorno” from Palazzo Manfredi (pictured top); meanwhile, it’s all in the detail at Palm Suite (left) and Maalot Roma (right).

Fendi Private Suites…the world’s first hotel by Fendi, dedicated followers of fashion shop in the flagship boutique below, while a set of seven impossibly chic suites wait above. The personal shopping experience is as fabulous as you’d expect.

Villa Spalletti Trivelli…with its aristocratic origins and ties to Italian royalty, this 15-bedroom villa is filled with antiques and artworks which set the scene for an elegant stay just steps from the Trevi Fountain.

Margutta 19…hidden on the ochre-hued ‘artist’s street’ where Gregory Peck set out to woo Audrey Hepburn in Roman Holiday, this pretty palazzo is decorated in pastel shades for a soothing start to your day in the capital. 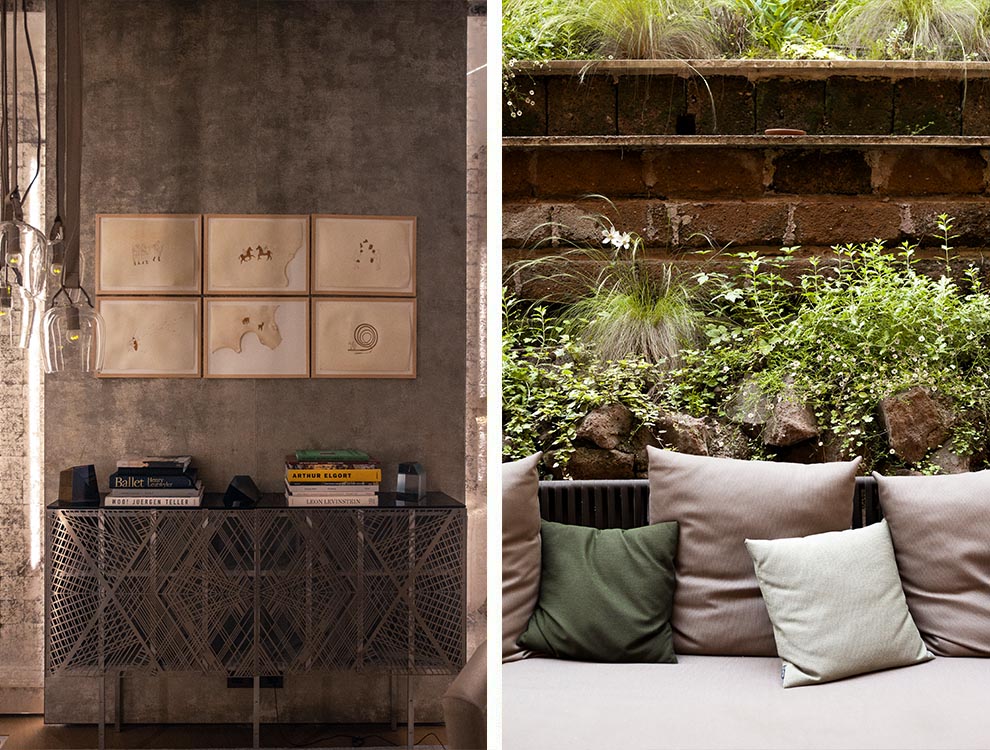 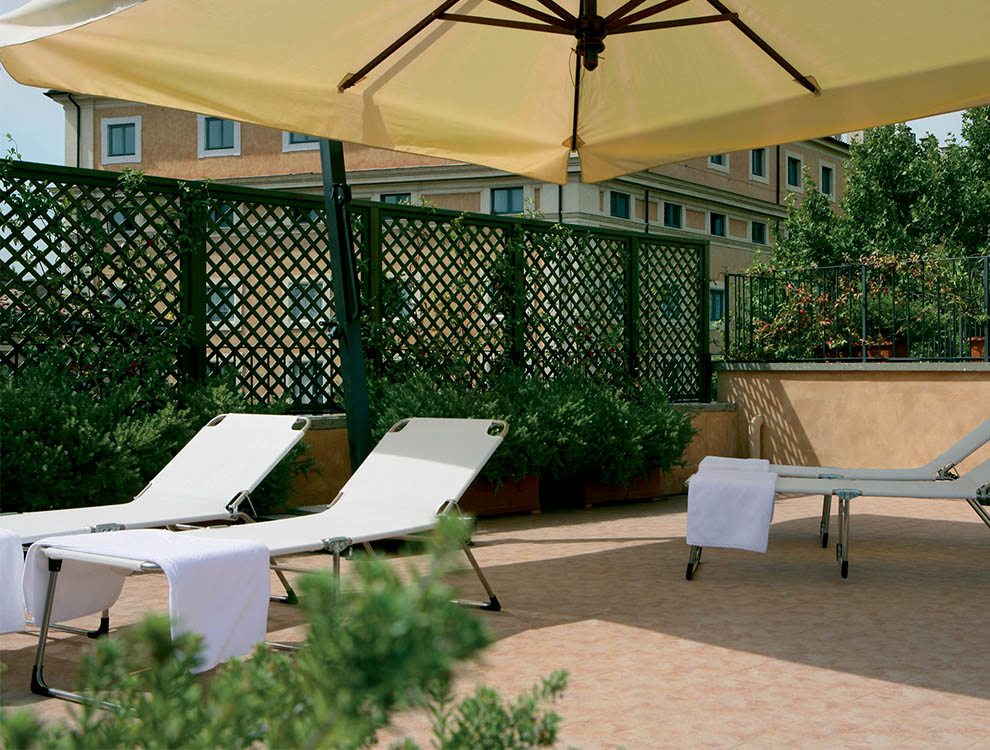 Babuino 181…the wonderfully spacious suites here feel like private apartments, with separate living rooms and large, marble bathrooms. The hotel’s terrace is the perfect place to enjoy a cappuccino and cornetto away from the hustle and bustle. 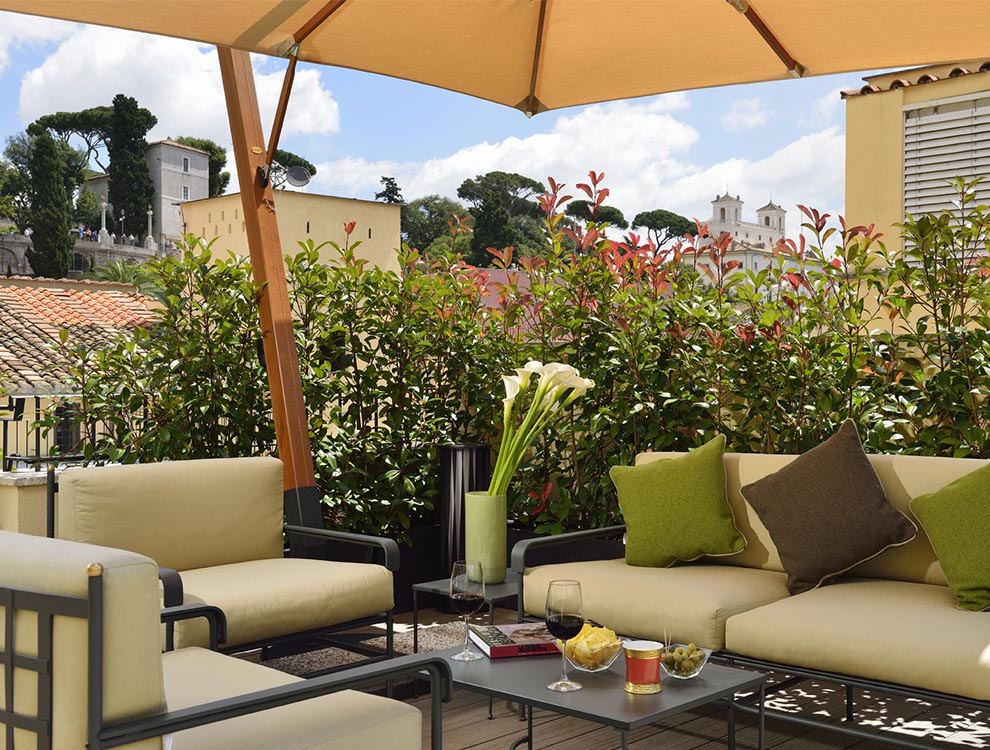 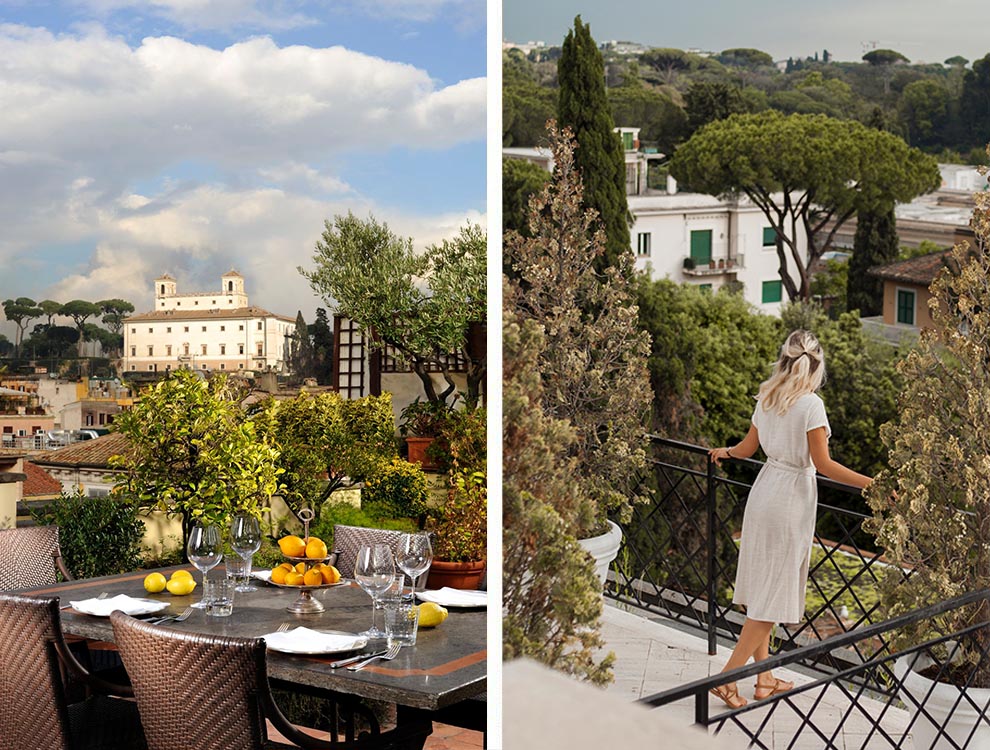