Combine a culture trip with seaside dips in this colourful, coastal city

With world-famous architecture and a coastline of golden sandy beaches, it’s easy to see why Barcelona is one of Europe’s most popular city breaks. From the medieval masterpieces of the Gothic Quarter to the colourful Catalan Modernist works of Gaudí, there’s something to see on every corner. Split into bustling barrios, most of the city is extremely walkable – the Old Town has pedestrianised streets where you’ll uncover traditional Spanish food markets, and wherever you visit in Barcelona you’ll keep coming back to Las Ramblas. It’s the city’s backbone, and a wonderful place to promenade and watch the world go by. As the sun starts to set, swing by one of the city’s classic barrio parties or sangria-fuelled festivals held throughout the summer on balmy, Barcelona nights. 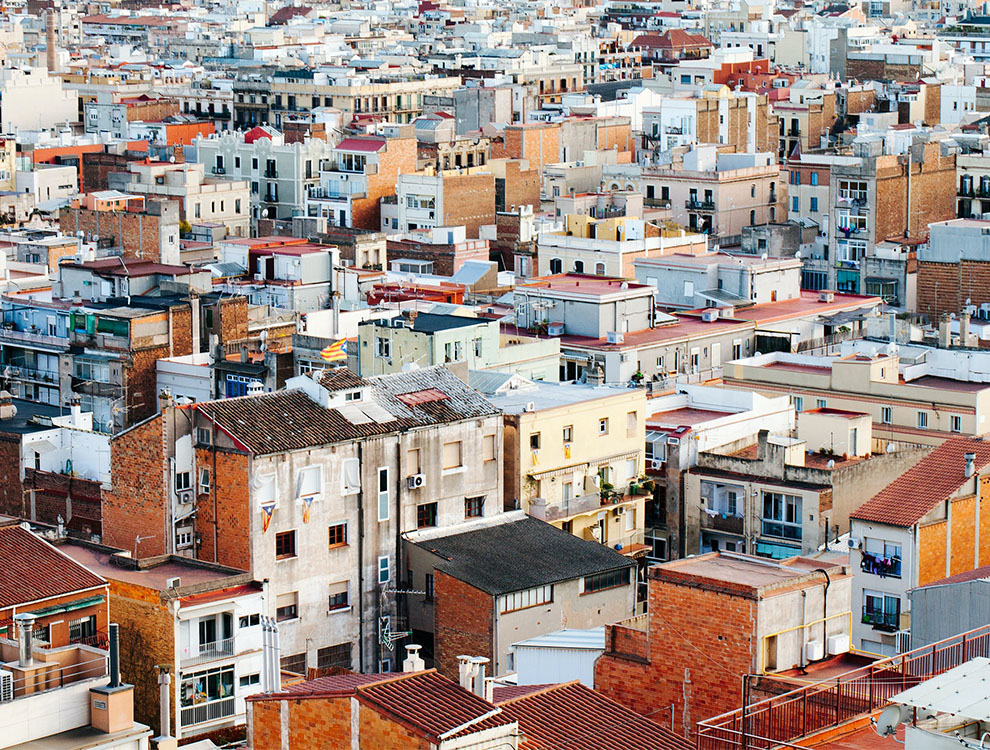 La Sagrada Familia: This show-stopping basilica was masterminded by architect and champion of Catalan Modernisme Antoni Gaudí and is one of the world’s longest running construction projects. While the first stone was laid more than 130 years ago, book ahead and plan your trip for 2026 if you want to see the finished masterpiece.

Casa Batlló: A wonderfully whimsical townhouse with a wave-like, oceanic façade meant to mirror the sea, the trencadís tiling creates a shimmer effect which is best photographed in the early morning and late evening.

Parc Güell: This rainbow-hued public park is one of the city’s most popular outdoor attractions, and for good reason. Climb to the top of the hillside to take in the city from the magical terraced area complete with multi-coloured mosaic seats.

MACBA: The whitewashed, glass-fronted Museum of Contemporary Art houses a permanent collection dedicated to Spanish and Catalan works from the avant-garde of the 1920s to present day. Time your visit from 4pm on Saturdays when you can view the ever-changing exhibitions for free.

Ciutadella Park: Slow your city break down in this idyllic oasis, the perfect spot for a picnic or a romantic row across the lake. 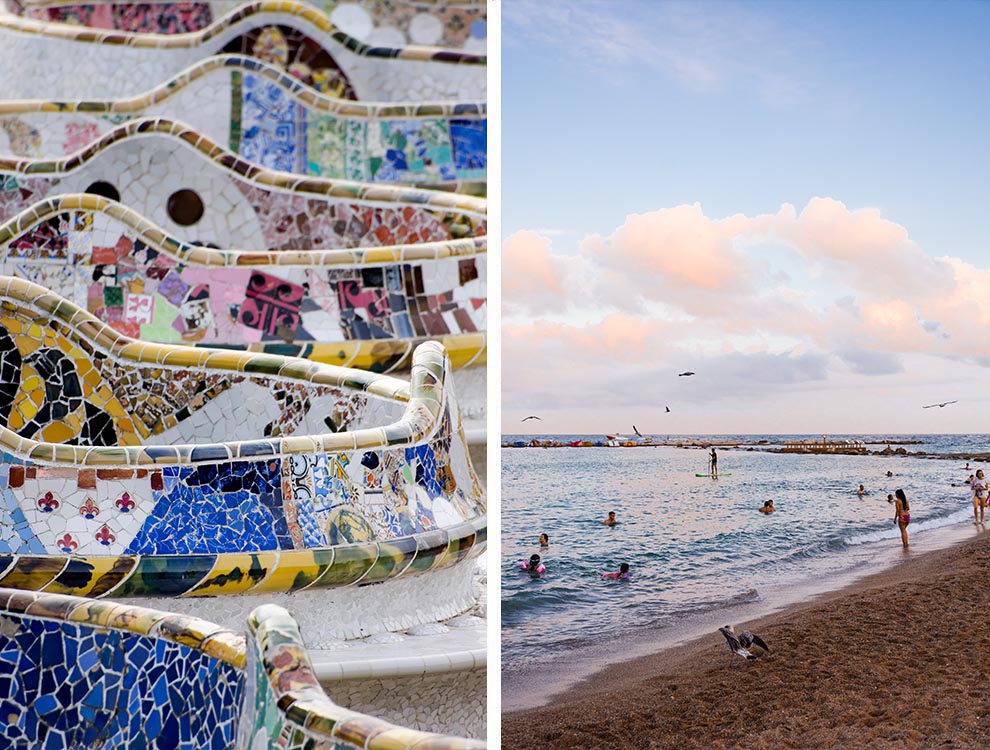 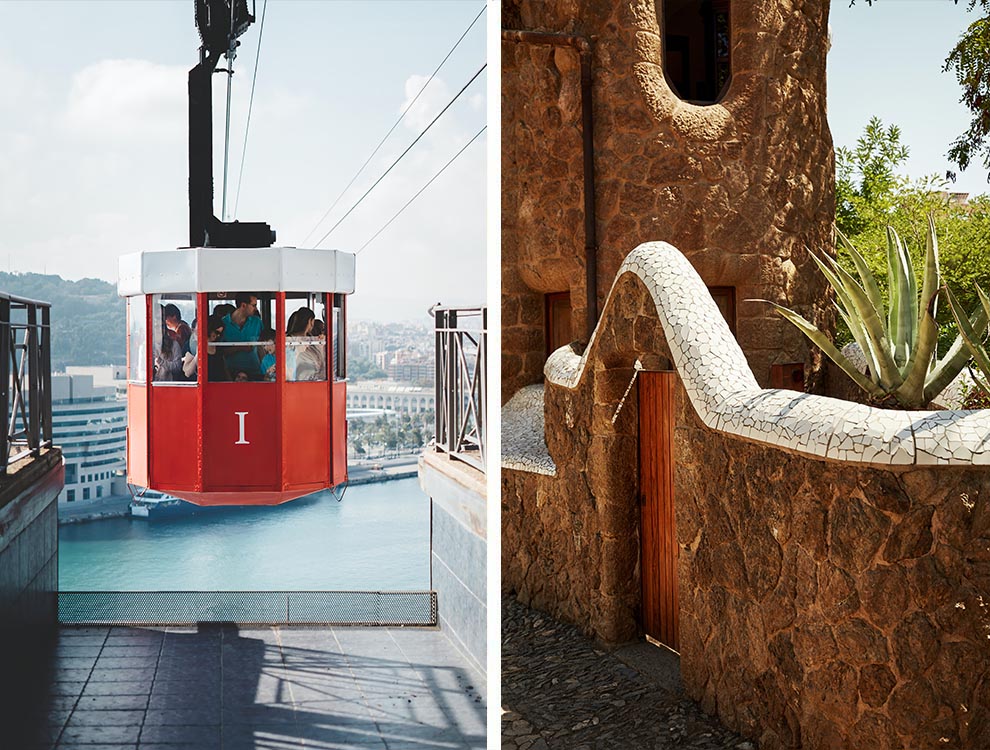 Mercat de la Boqueria: A riot of aromas and vibrancy, this traditional open-air market on La Rambla takes visitors on a journey of the senses. Think fresh fruits and vegetables, just-baked bread and burritos, artisan pastries, and over-the-top marzipan creations.

Quadrat d’Or: Arguably the most Instagrammable spot in Barcelona, this architecturally delightful area of the Eixample district is a feast for an avant-garde lover’s eyes.

Bogatell Beach: Originally created for the 1992 Barcelona Olympic Games, this golden stretch of sand on the outskirts of the city is a local hotspot to sunbathe, swim, and windsurf.

…and a longer look at Barcelona’s lesser-known spots

The secret gardens of Gràcia

Just a few streets up from hectic Passeig de Gràcia, Gràcia feels like a world of its own. Gaudi’s Parc Güell may be the main draw, but stick around longer to discover a young, arty neighbourhood with a welcoming café culture. If you have more time to spare, go north to Parc del Laberint d’Horta – a hedge maze wrapped in a romantic 18th-century garden. The terraces and trees frame views across the city to the Mediterranean. 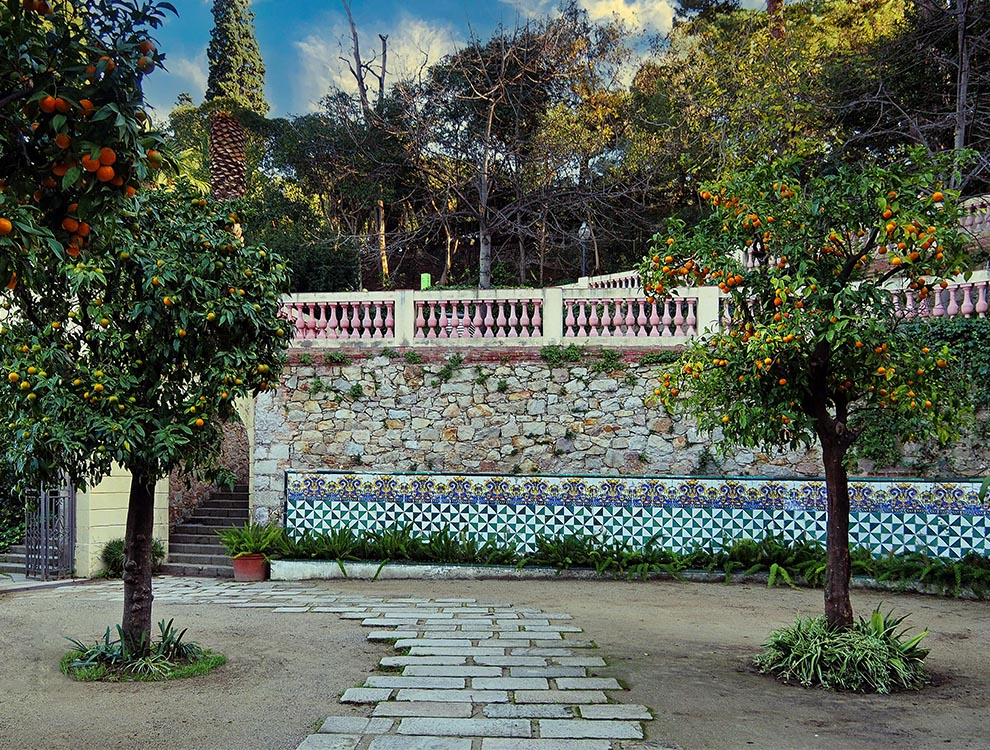 Tucked between the city centre and the mountains, this former medieval village has kept something of its small community feel. Its peaceful plazas and leafy parks mean Sarrià is made for laid-back days sampling local life. Hop between artisan bakeries such as L’Obrador and chocolate shops selling delicate, handmade truffles, or search for designer collections in independent boutiques. This well-heeled neighbourhood claims to cook the best patatas bravas in the whole city – delicious, golden fried potatoes with a rich and spicy tomato sauce. Catalan tapas bars including El Canalla are good places to put them to the test.

Also known as Turo de la Rovira, these abandoned anti-aircraft defences boast some of the best views in the city – and are still relatively under the tourist radar. Perched on the foothills which surround the city, time your visit for sunrise if you want this cinematic setting to yourself, or come later in the day to join the laid-back crowd of locals watch the sun set over the cityscape. The leafy residential neighbourhood of El Carmel itself feels like a quiet escape from the bustling city centre – just be sure to wear your comfiest shoes to navigate the hilly streets.

What – and where – to eat in Barcelona

From its humble origins to the contemporary culinary movement it has become today, the Barcelona tapas scene is abuzz with lively bars, rustic restaurants, and traditional market stalls serving up sharing plates and bite-sized delights best enjoyed with friends and family. The daily-changing menu of Bar del Pla is a local favourite, while the farm-fresh ingredients used in the elegant dishes at Bar Cañete are washed down with regional wines from nearby Montsant or Priorat. Think patatas bravas, melt-in-the-mouth croquettes, char-grilled octopus, and spicy bomba. 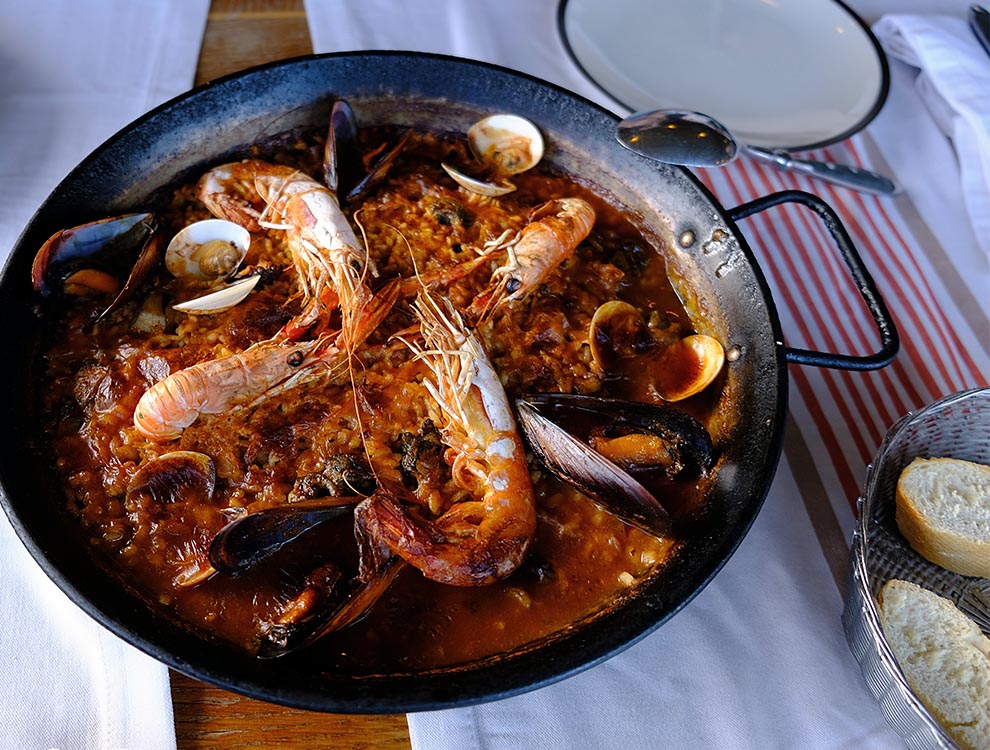 Virtually synonymous with the Catalan capital, tucking in to a steaming plate of paella is practically a rite of passage in Barcelona. The rice dish can be sampled at its most authentic straight off the street, but for a more refined setting, La Mar Salada serves seafood which has often been caught just a few metres from the restaurant that morning.

To sample a staple part of Catalonian cuisine, try ordering trinxat (think Spanish bubble and squeak), a traditional meat dish accompanied with chopped potatoes and cabbage doused in garlic, thyme, and lemon. If you’re visiting in early spring, restaurants will be overflowing with calçots, a Catalonian onion which is usually cooked over the ashes of an open fire, wrapped in paper and served alongside a bowl of romesco sauce. 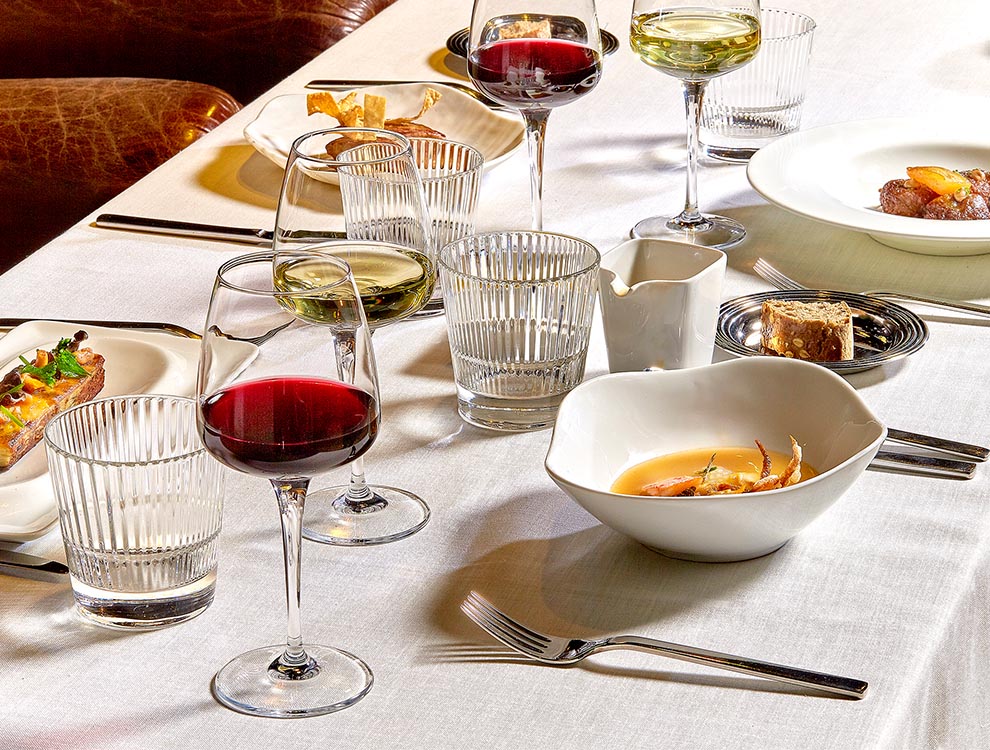 Market fresh produce and seasonal ingredients that speak for themselves at Bistro Helena, the Mediterranean-focused restaurant at Grand Hotel Central.

The original crème brûlée, the crema Catalana can be found on most menus throughout Barcelona and is the perfect way to end any meal. There’s nothing like the satisfying crack of the caramelised top layer breaking as you sink your spoon into lemon and cinnamon dusted filling – think of this as the Catalan cousin to the famous French dessert.

Where to stay in Barcelona 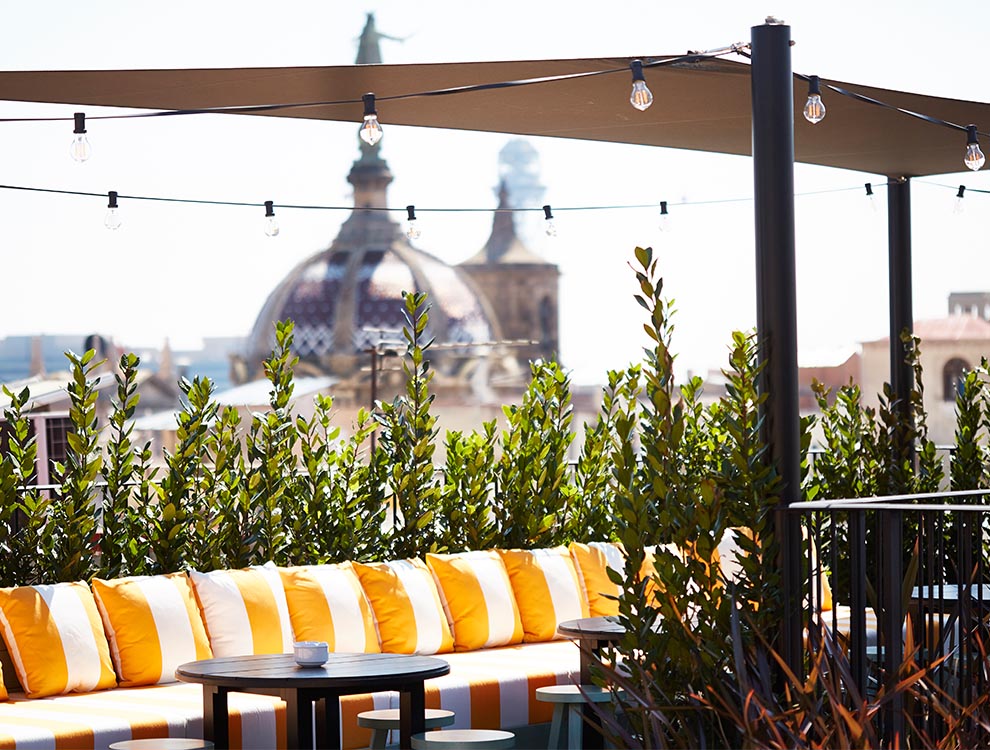 WITTMORE HOTEL…This Gothic Quarter gem has a modern member’s club feel – with a sociable, stylish vibe on the citrus-yellow striped sun deck that serves cocktails poolside to its adults-only guests. Book a Wittmore Suite between May and October to reserve the hotel’s rooftop terrace for an unforgettable ‘sleep beneath the stars’ experience. 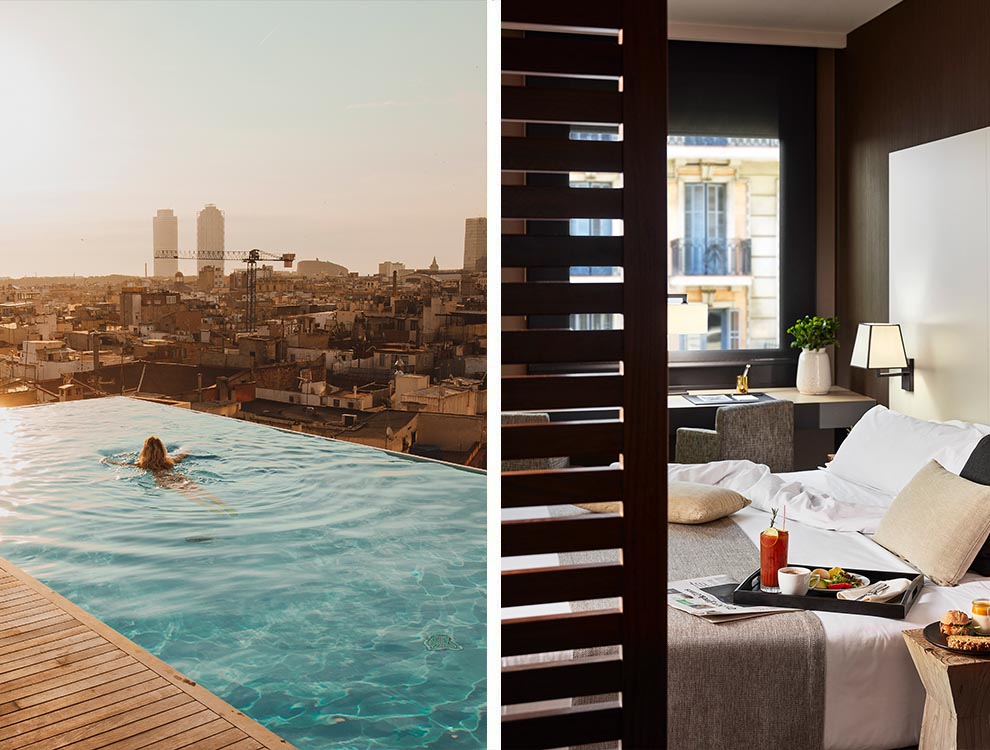 Grand Hotel Central…Historic sites can be spotted out of almost every window at this design hotel in arty El Born – but no view compares to the rooftop terrace. After a sky-high swim, grab one of the hotel’s ‘local view’ guidebooks to explore the city the Catalan way. 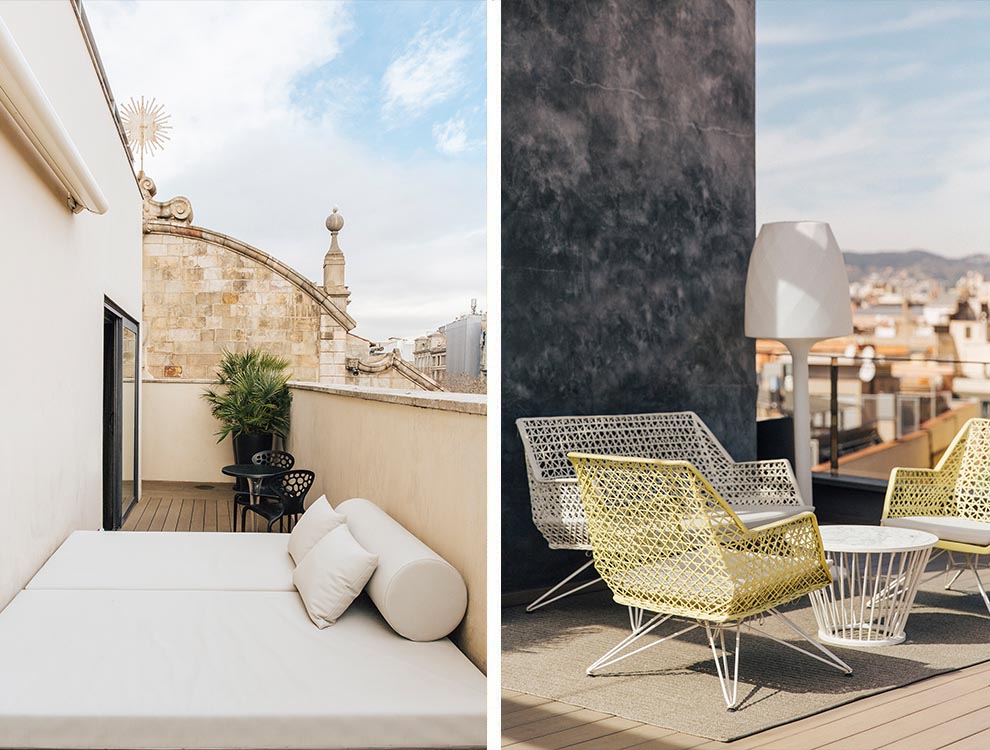 Hotel Bagués…A swimming pool and tapas bar on top of the historic palace of El Regulador, one of Barcelona’s most attractive buildings on La Rambla? Yes please. La Terraza del Bagués at puts you in prime position to soak up the city’s skyline, with sophisticated Spanish sharing plates plus a generous splash of sangria. 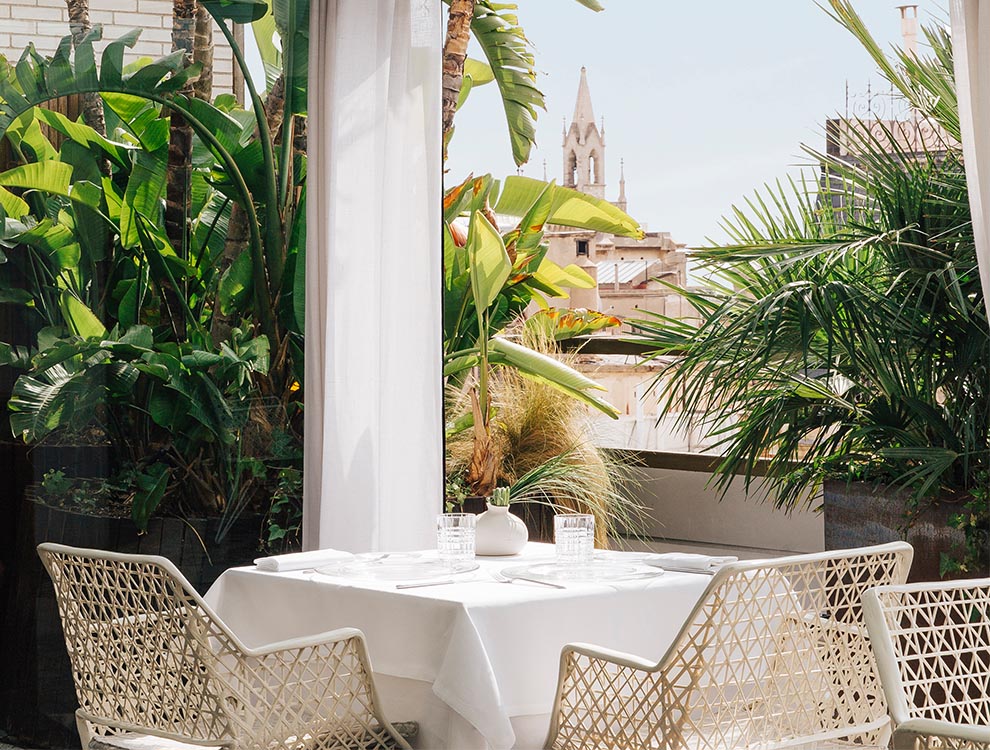 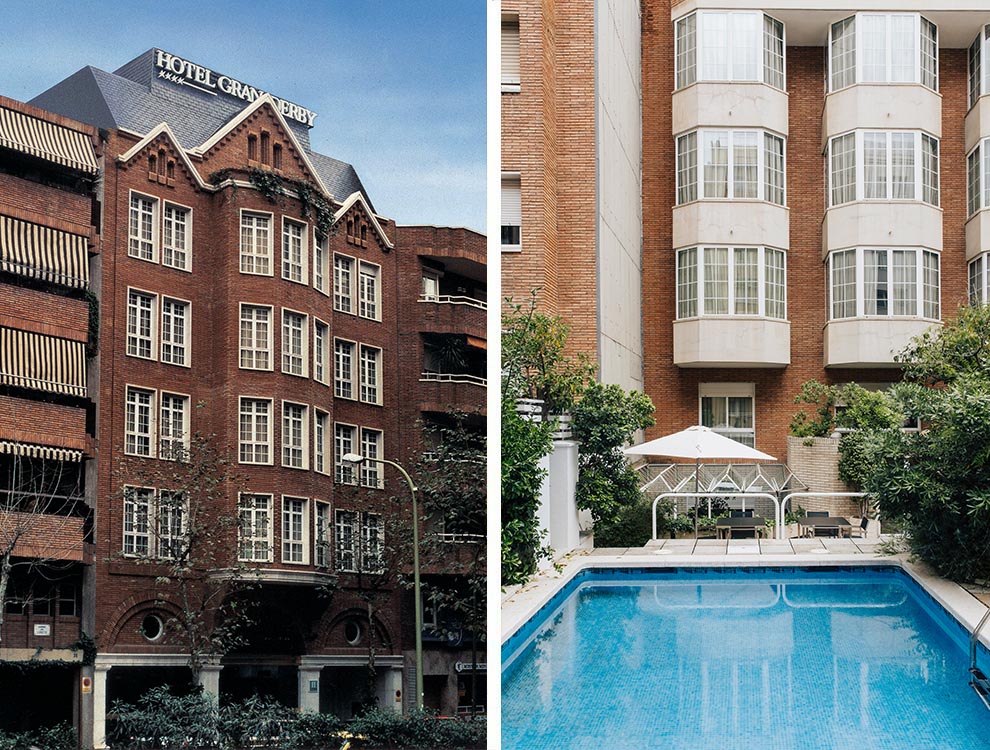 Gran Derby Suite…Tucked away in a side-street off Avinguda Diagonal, this sophisticated retreat has an unusual façade in the style of an English townhouse. And its quirks don’t stop there. While most hotel pools in Barcelona can be found on a rooftop terrace, Gran Derby Suite’s sizeable pool is in a pretty outdoor garden area. Lie back on a sun lounger and soak up this tranquil spot in the heart of the city.