A ‘hop on, hop off’ westbound itinerary from Tokyo to Kobe by Shinkansen

With its futuristic cityscapes and tranquil temples, ancient traditions and cutting-edge luxury hotels, Japan is a country that must be seen to be believed. And, thanks to its legendary Shinkansen (also known as the Bullet Train), travel is all part of the experience. In this itinerary, we whisk you from Tokyo to the country’s waterfront cosmopolitan city, Kobe, taking in some of the country’s must-see sights en route. Prepare to be swept off your feet.

Tokyo is a city that never stands still; a sprawling mishmash of neighbourhoods each with their own distinct identity. Before embarking on your Shinkansen adventure, pause at the Tokyo Station Hotel, a gorgeous red-hued building that dates back to 1915. Start your stay as the locals do, with a jog to the Imperial Palace. Then spend a day or two exploring the city: the shopping district of Ginza, the grand Gyoko-dori street, the Godzilla statue in Tokyo’s Hibiya, and the many restaurants of Tokyo Station are all on your doorstep. 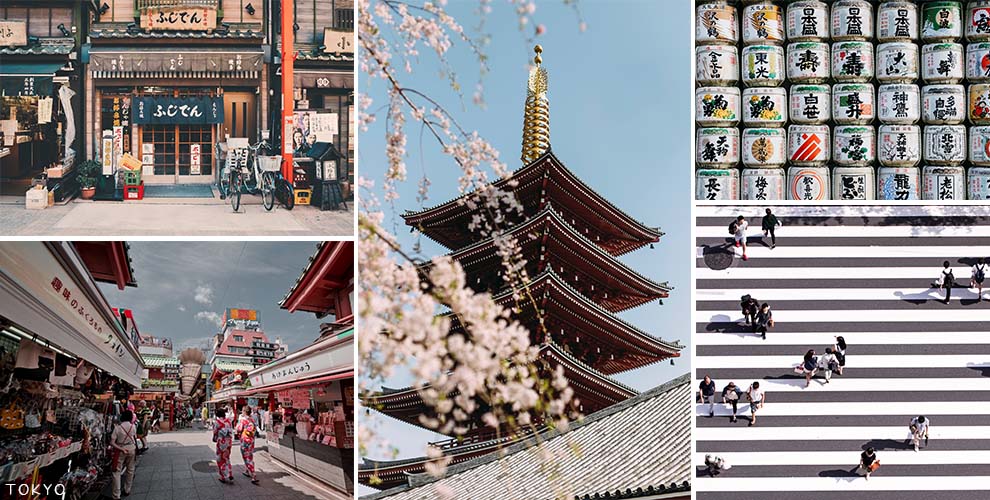 To get a feel for Tokyo’s many sides, go twin-centre and book a night or two at Hotel Gajoen Tokyo. Located in the hip Meguro district, from here you can seek out trendy shops and craft cafes. And, if you’re visiting in the spring, don’t miss the annual cherry-blossom festival as these iconic trees drop their confetti-like petals.

At times, Tokyo can feel a little overwhelming, so we highly recommend choosing hotels in a great location, but with a sense of space and calm. Tokyo Station Hotel puts the capital’s highlights at your feet, while Hotel Gajoen Tokyo feels like a city-centre retreat: tranquil, elegant, yet moments from the trend-setting Meguro district. Suggested stay 3-5 days. 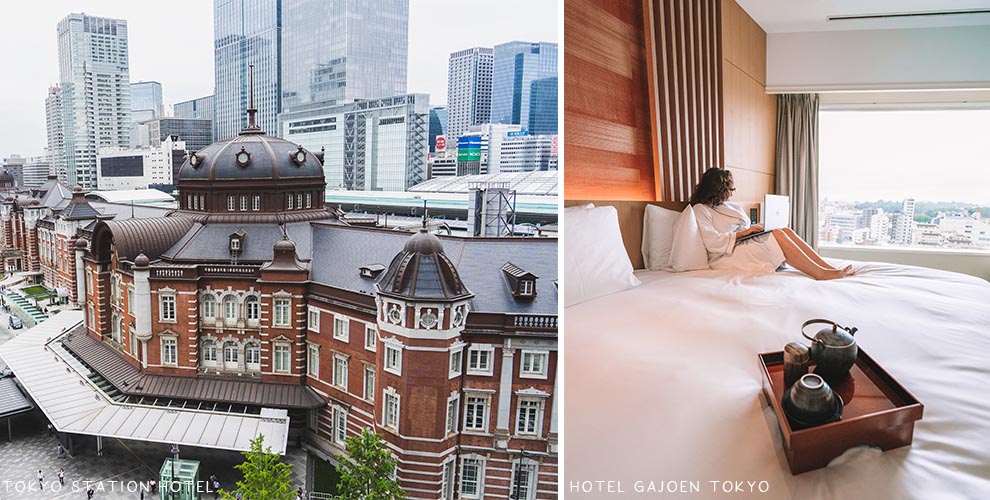 ALL ABOARD THE SHINKANSEN

Catching the Shinkansen is an effortless experience. Trains leave from both Tokyo station and Shinagawa station with surprising regularity – and typical Japanese efficiency. The average delay is just 36 seconds. And shortly after boarding you’re off: rocketing along at up to 320 kilometres per hour. Order some refreshments and take in the views as you whiz past Mount Fuji. 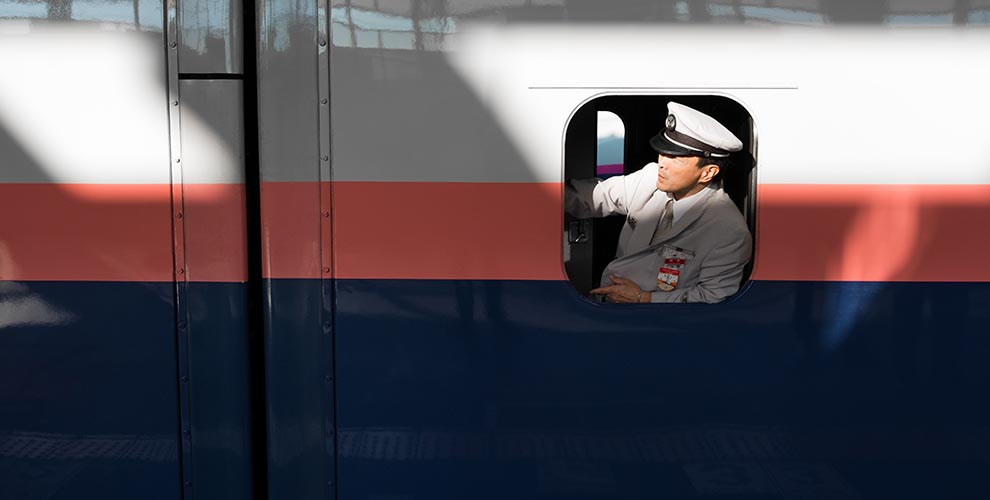 If time is tight, you could make the full journey to Kobe in two hours, 40 minutes. But we’d highly recommend making some detours along the way, starting with the spellbinding Izu.

THE NATURAL WONDERS OF IZU

Rugged coastline, mellow surfer beaches, dense forests dotted with traditional ryokan dwellings and onsen with their therapeutic hot waters. It’s hard to believe that the cool, green calm of Izu is under an hour away on the bullet train from the non-stop bustle of Tokyo. Known as the ‘province where the hot water gushes’, Izu is overflowing with natural wonders – take in views of Mount Fuji from the top of a volcanic crater, or wander through pink tunnels of Kawazu cherry blossom.

Take the Izuhakone Railway Sunzu line from Shuzenji Station to Mishima, then take the bullet train to Nagoya.

NAGOYA: THE BEST OF BOTH WORLDS

Nagoya’s location means you don’t have to travel far to experience awe-inspiring natural beauty. Head to the picturesque Japanese Alps for hiking and panoramic mountain views. Or stay in the city and visit the Shirotori Garden, full of flora and fauna all year round. Known for its special Hatcho miso, Nagoya is the perfect place to sample some of Japan’s most authentic flavours, from a hearty bowl of misonikomi to the tender meat of doteni.

A true fusion of old and new, The Tower Hotel Nagoya started life as a television tower in the 1950s, and has been reimagined as a modern boutique hotel over half a century later. With gallery-like interiors inspired by Tokai artistry, locally sourced makers and materials are woven into the fabric of this masterpiece of modernity. Suggested stay 1-2 nights. 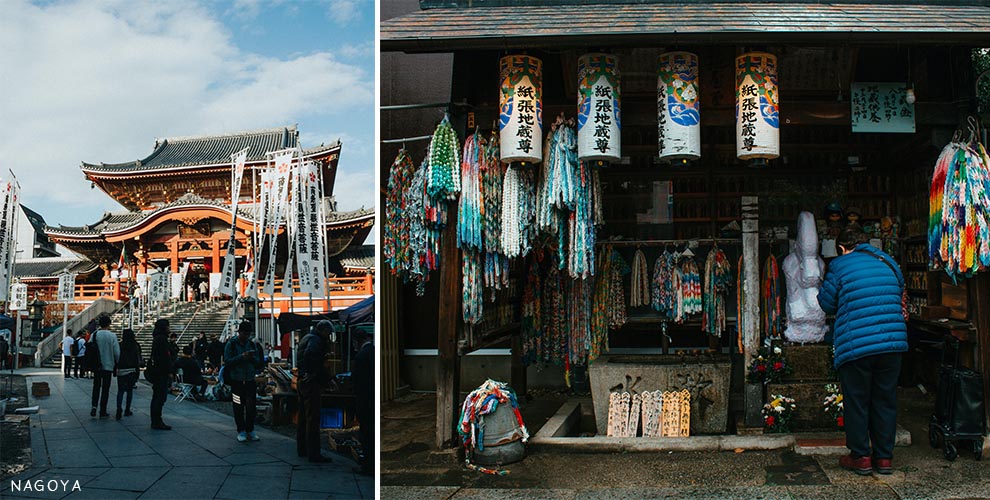 Take the Kintetsu Express train from Kintetsu Nagoya to Kashikojima – a complimentary shuttle bus is available from Kashikohima to Shima Kanko Hotel: the Bay Suites in Ise-Shima.

A PLACE OF PILGRIMAGE: ISE-SHIMA

Princes, poets and pilgrims have long turned to Ise-Shima for spiritual, cultural (and culinary) inspiration. This ocean peninsula is where haiku-pioneer Matsuo Bashõ was born and where the Imperial Family is said to source their seafood. A stay in Ise-Shima demands a pilgrimage to Ise-jingū. This sacred Shintō shrine complex is the size of a small city – a labyrinth of inner sanctums, outer temples and moss-carpeted courtyards in a serene forest setting. The original shrines date from the 3rd century, but the ones you’ll see are newer – tradition dictates the shrines are recreated every 20 years to specific plans and ancient practices. 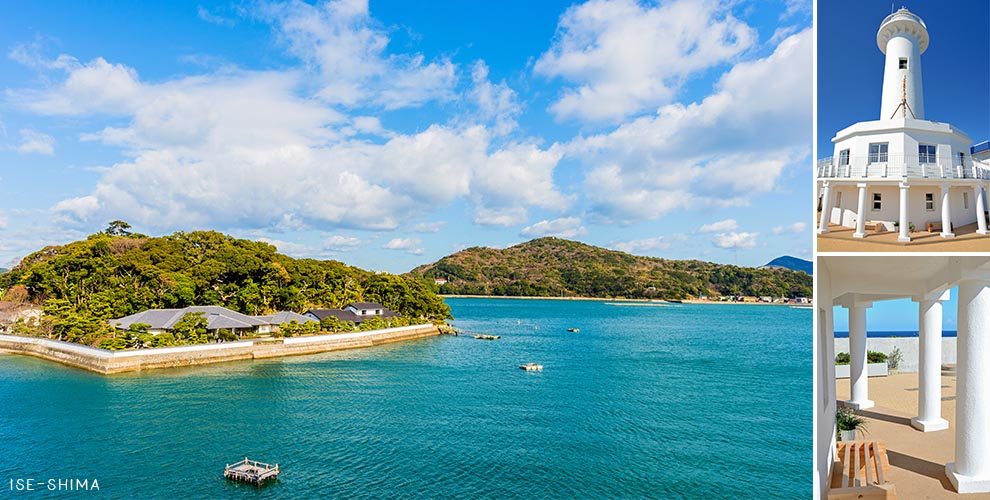 Breathe in the postcard-worthy peacefulness of Ise-Shima National Park from the comfort of Shima Kanko Hotel: the Bay Suites, an all-suite Japanese retreat on the shores of Ago-Wan Bay. Enjoy the perfect pairing of sunsets with your seafood at Michelin-starred La Mer, or get a taste of everything on the intricately prepared tasting menu at Hamayu, the hotel’s second restaurant. Immerse yourself in the local culture with Shima Kanko’s impressive array of activities, from making your own oceanic accessories at Pearl Miki, to taking part in a traditional Tea Ceremony in the beautiful Tatami Room, ‘Guan’. Suggested stay 2-3 nights. 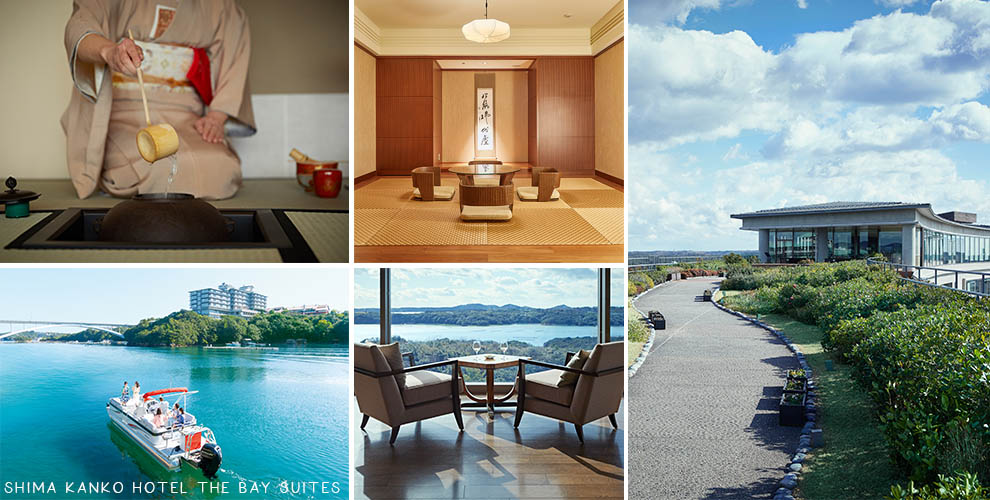 Take the Kintetsu Express train from Kashikojima to Yamatosaidaiji, transfer to the Kintetsu Nara Line to Kintetsunara (2h30m journey) – note that the Japanese Rail Pass is not valid on Kintetsu trains.

Next up is the first capital city of Japan, home to eight UNESCO World Heritage Sites. Wander through the serene Isui-en Garden, be inspired by the world-famous Todai-ji Temple, lose yourself in the pathways that surround the Kasuga-Taisha Shrine. Along the way, you’ll encounter the sacred deer that roam free across the city. To really soak up the atmosphere of Nara, we recommend staying overnight at Noborioji Hotel Nara. This boutique hotel is right at the foot of the Kofuku-Ji temple and renowned for its exceptional service and French-influenced fine dining. Suggested stay 1-2 nights. 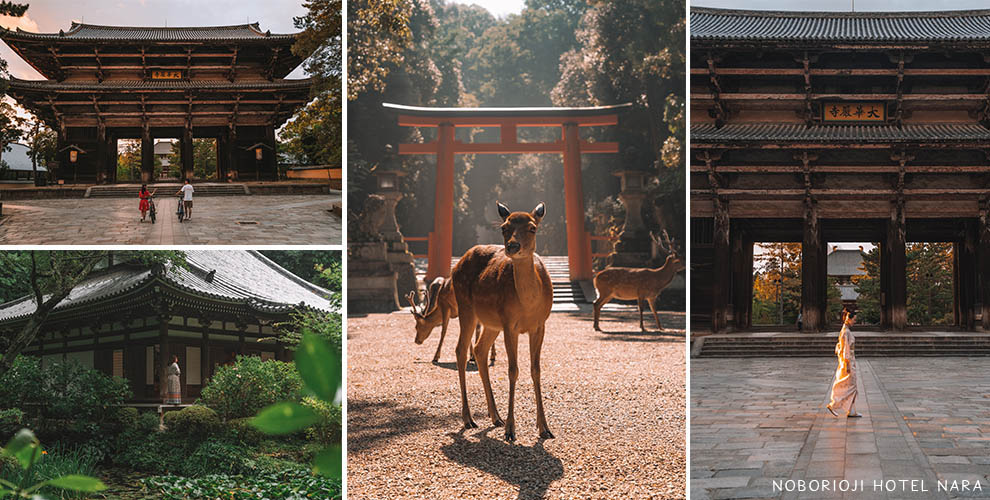 With more than 1,000 temples and countless tea houses, Kyoto is the heart and soul of ancient Japan. And, while the best way to experience the city is to step out and lose yourself in it, there are some sights every traveller should see. Fushimi-Inari Taisha is an awe-inspiring shrine made up of hundreds of vermillion gates that form a tunnel up the mountainside. And, in the evening, the softly-lit Geisha district of Gion has an enchanting, secretive atmosphere. Make time for hanami, the ancient practice of flower-viewing, before sipping on sweet umami-plum tea fresh from the city’s groves, which come into full bloom every spring for the annual plum and cherry blossom festivals. 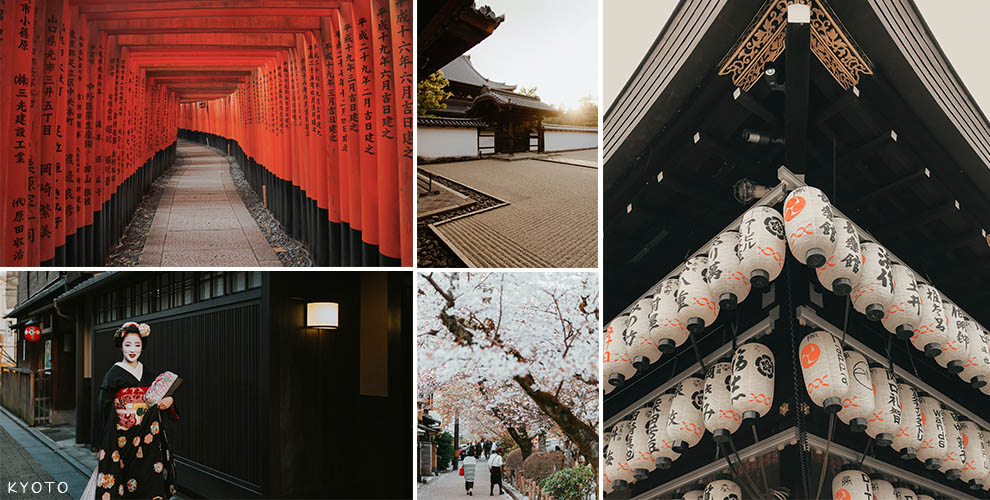 A restored ryokan with suites discreetly arranged among green courtyards, Sowaka perfectly complements this historic city. Harmoniously designed, traditional ryokan elements such as paper sliding doors are interwoven with modern comforts. Bath amenities are made with Japanese camelia oil, and the hotel’s water is drawn from its own underground spring. It’s all designed to create that Kyoto-state-of-mind. With the ancient capital on your doorstep, private tours are available to the nearby Kiyomizu-dera Temple – guided by one of the priests, you will have exclusive access to areas that are normally off-limits to the public. Suggested stay 2-3 nights. 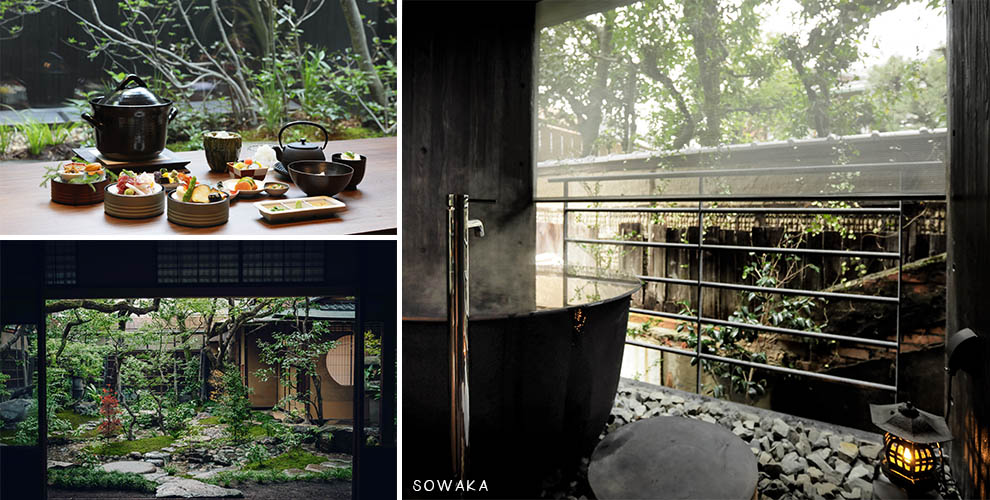 Either take the Special Rapid train on the JR Kyoto Line which will get you to Sannomiya Station in Kobe in 50 minutes, or the high speed shinkansen to Shin-Kobe Station which only takes half an hour.

LAST BUT NOT LEAST: KOBE

Home to the highly prized Kobe beef, your final destination is an ancient maritime gateway with the verdant Rokko mountains as a backdrop and the sea stretching beyond the bustling port. Climb the Port Tower for great views of the city and then visit the numerous shops and restaurants along the waterfront, or Take a stroll along Harborland and Meriken Park. Compact and picturesque, most things can be reached on foot from your luxury hotel, Hotel La Suite Kobe Harborland. Overlooking the harbour with stunning sea views, every bedroom has a large Jacuzzi bath with a television for the ultimate relaxation time. Suggested stay 1-2 nights. 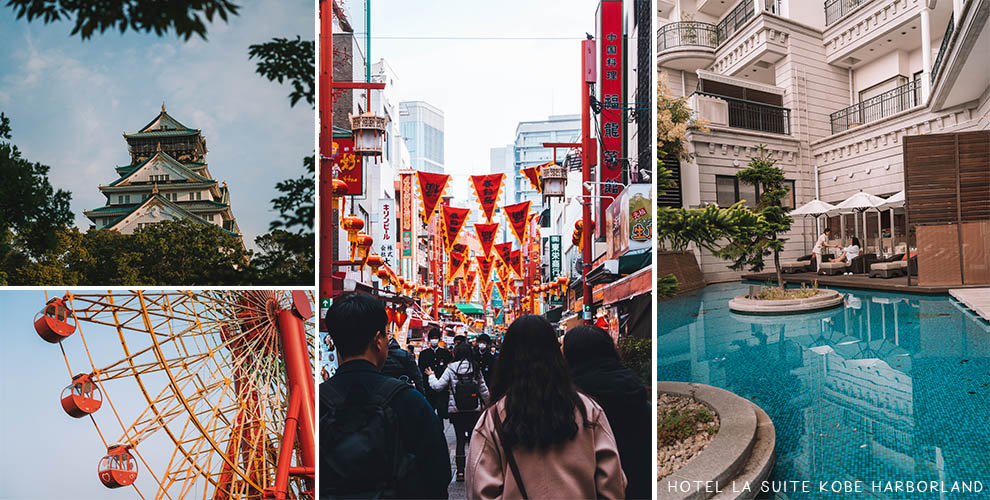 Make sure you choose the correct category of Shinkansen for your journey. On the Tokaido Shinkansen, from Tokyo to Kobe, the most frequent and fastest option is the Nozomi. If you’d like to use the Japan Rail Pass, your best choice is the Hikari which takes just over three hours.