The London hotels to book for a ‘best of British’ summer

The English capital city will be going wild for the crown this summer as Her Majesty The Queen celebrates her Platinum Jubilee after 70 years on the throne. While festivities will reach fever pitch during the Jubilee Weekend in early June, London will be abuzz with picnics in the park, culture trippers spilling out of theatres, galleries, and museums, and streetside dining late into the (hopefully, warm) evenings throughout the summer. To narrow down the perfect places to soak up the atmosphere, we’ve handpicked the best boutique hotels in London for a royally good city break – think Henry VIII-themed bedrooms, Queen Victoria-inspired afternoon tea, and James Bond martinis. 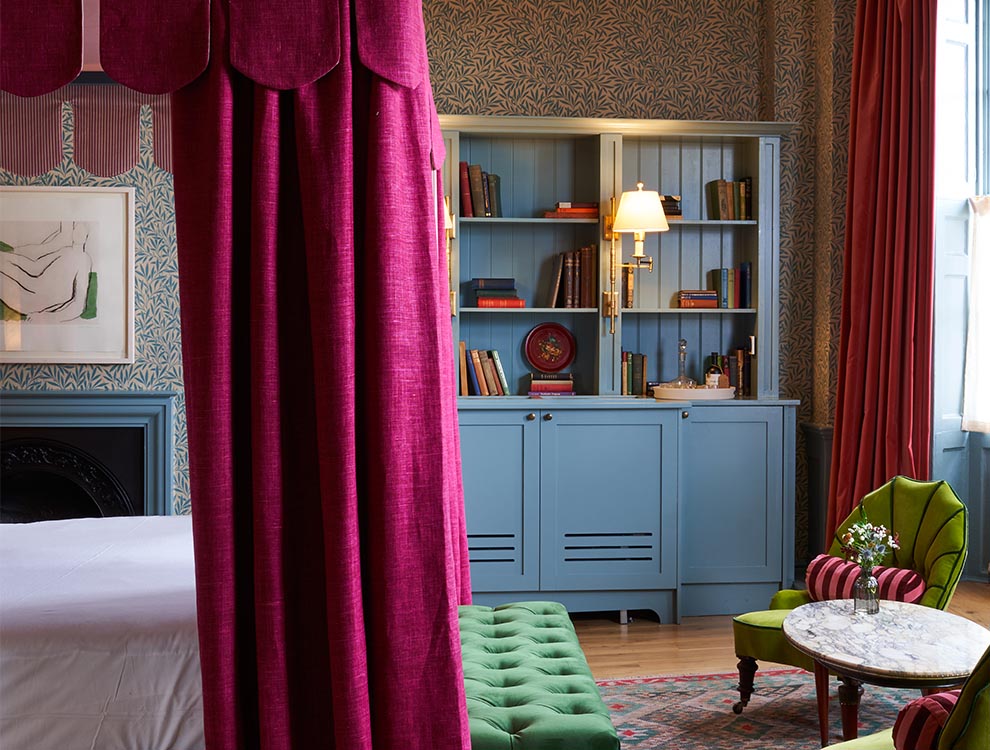 Taking up prime position on the waterfront opposite historic Hampton Court Palace – the ancestral home of Henry VIII – The Mitre Hotel draws on its royal connections and guarantees an English country house-style experience just a short train journey from London’s city centre. Indulge in one of the Royal rooms – the Catherine Parr suite (pictured above) perhaps, named after Henry VIII’s last wife – and delight in details like copper roll top baths, four poster beds and expansive river views. King Henry pops up again as the inspiration behind the all-day café and wine bar Coppernose, while tables at 1665 Riverside Brasserie overlook the Thames. Book The Mitre’s picnic service to create a bespoke hamper from the restaurant menu, add a bottle (or two), and enjoy on the river- bank in true ‘Wind in the Willows’ tradition. 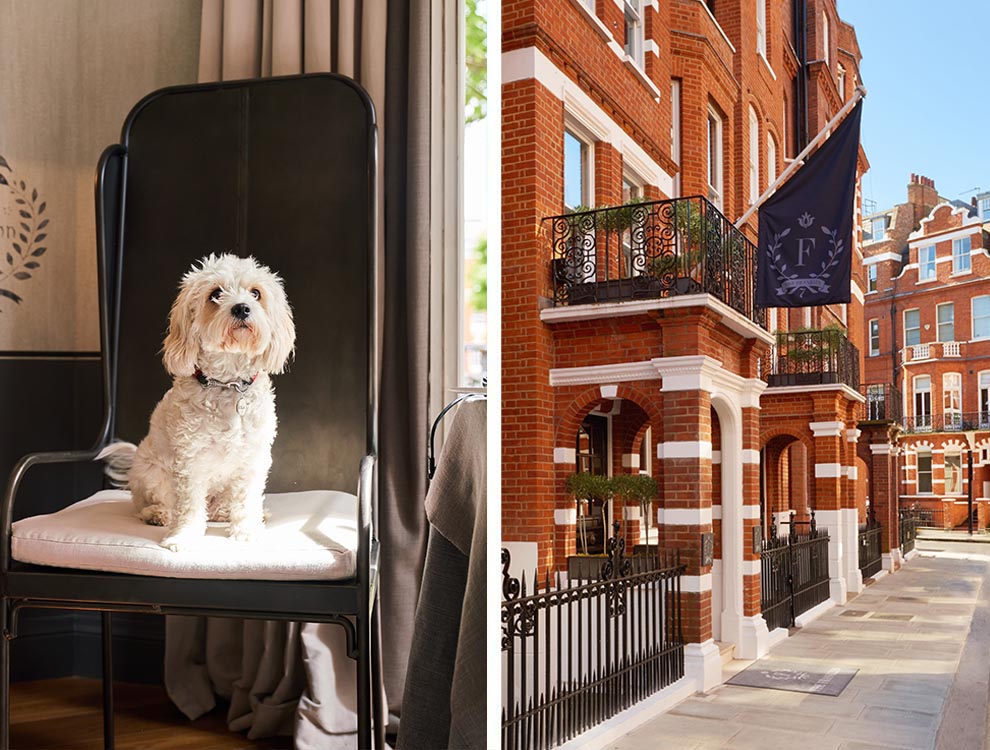 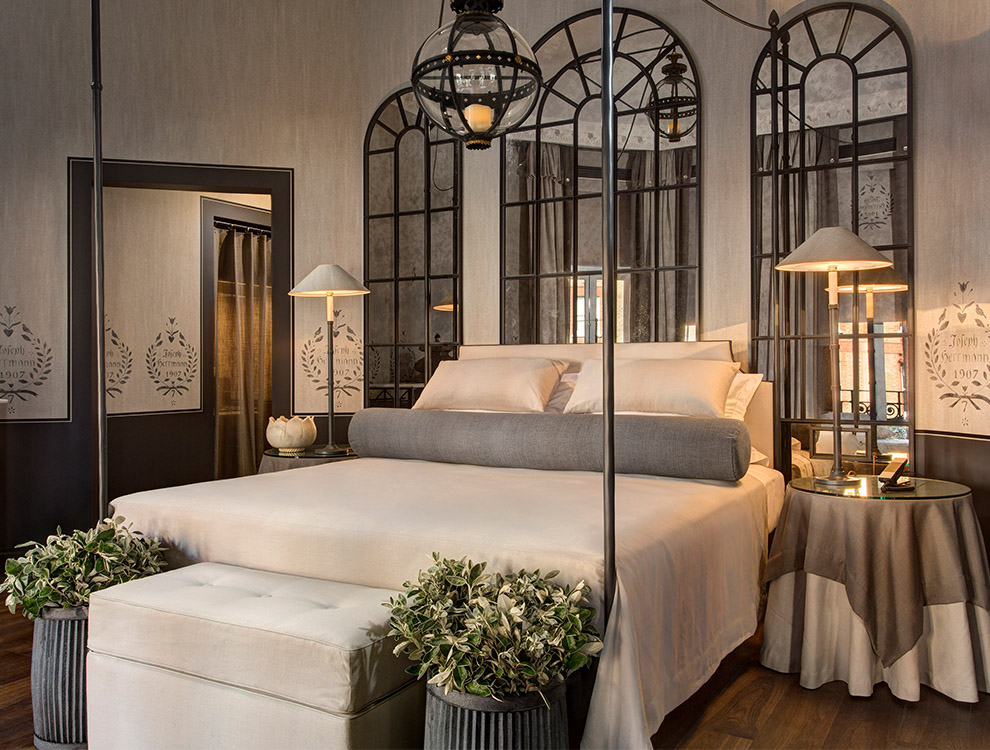 The luxury stores and world-renowned museums of Knightsbridge are just a hop, skip and jump from The Franklin’s front door, and this grand English townhouse is a most welcome refuge from the hustle and bustle of London life. With high ceilings and full-height windows looking out onto the lovely Egerton Gardens, the elegantly styled Garden Suites are oases within an oasis, where relaxation reigns from the snug library to the Hempel-designed hammam. The service here is ultra-personalised thanks to Les Clefs d’Or Concierge and 24-hour room service team, who are on hand to help with whatever takes your fancy. Four-legged friends will also be given top notch treatment at this pet-friendly property, where small, well-behaved dogs are welcomed with luxury dog beds and bowls. 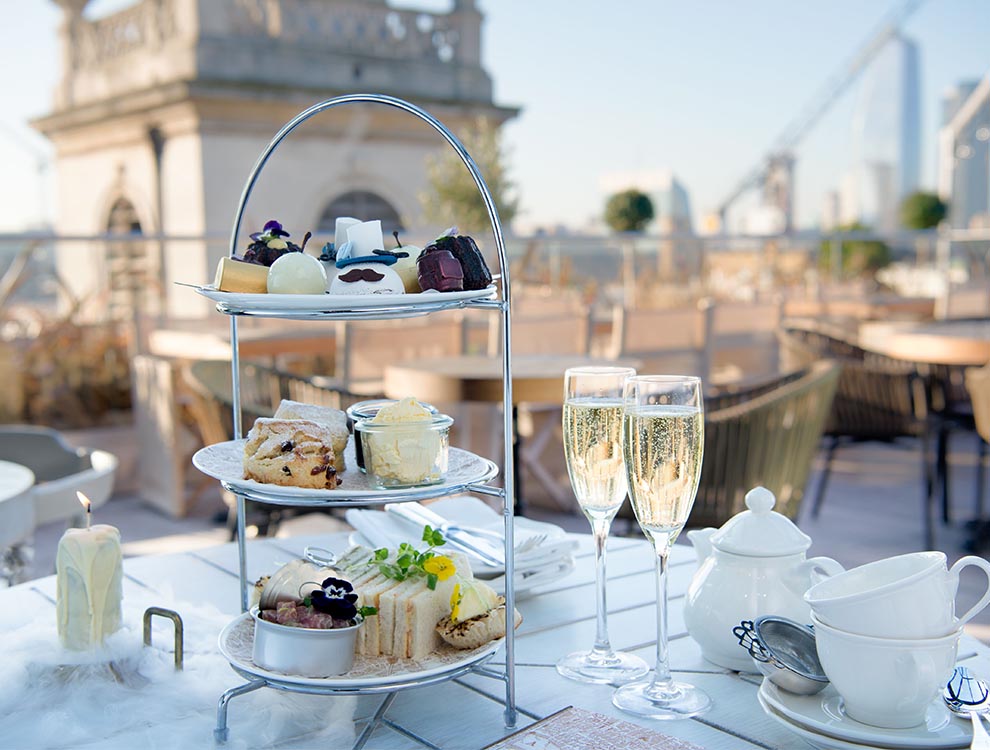 St. Paul’s Cathedral, Tower Bridge, and the shimmering Shard – Vintry & Mercer opens up to the London skyline, and puts this ancient district within touching distance. Inside, the rooms and suites contain plenty of nods to the City’s heritage – think bespoke fabrics inspired by merchant tailors of centuries past, and historic navigation maps and photographs on the walls. The rooftop Mercer terrace is made for alfresco dining and drinking in the cityscape above the City’s twinkling lights, with London-inspired cocktails from the rosemary-infused ‘Nelson Square’ to the fennel-flavoured ‘Nobleman’, plus the Guilds of the City Afternoon Tea based around the historic trades, guilds and merchants that once used to line the banks of the River Thames, as far back as 1394. Sip from a creative collection of ‘Tea Pot-Tails’ including the Cooper (a cocktail of Portobello gin, camomile and thyme, Knightor Vermouth, Mandarin saccharum) and nibble on themed pastries. 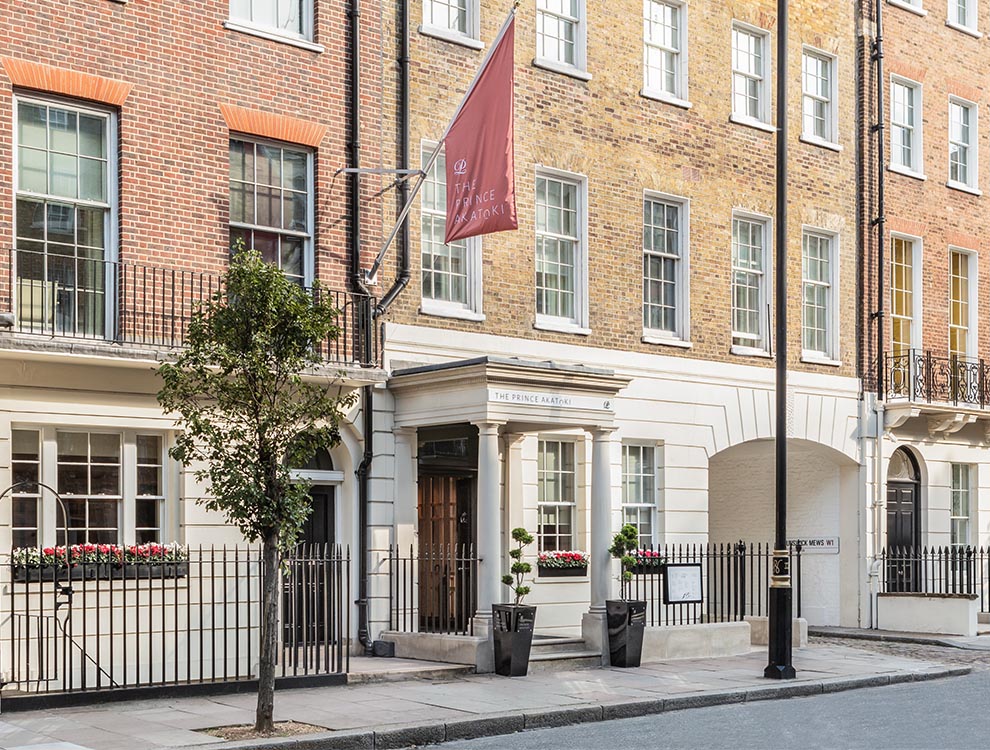 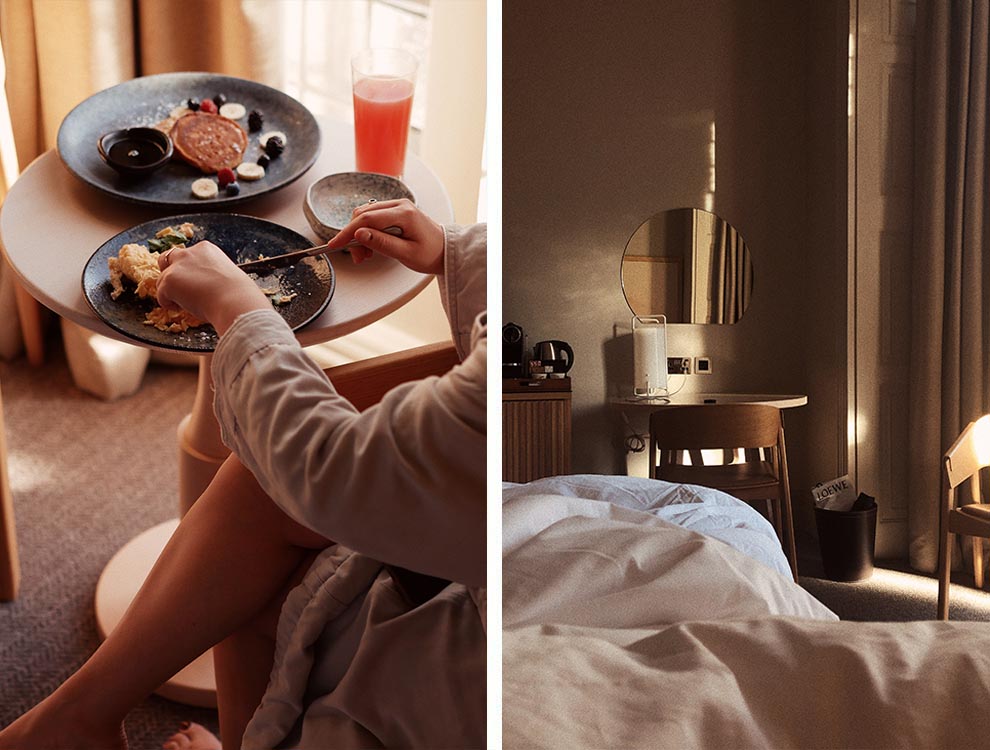 For a Japanese take on West End London, The Prince Akatoki is a tranquil space which feels a world apart from the buzz and bustle on the streets outside. With a name meaning ‘dawn’ or ‘sunrise’, interiors are minimalist in style – an invitation to pause, stretch out and relax. Expect mellow tones, clean lines and floor-to-ceiling feature windows that frame spectacular city views. Say sayõnara to any traditional sense of afternoon tea at TOKii Restaurant which fuses authentic Japanese flavours with homegrown produce from suppliers around London, resulting in an afternoon tea with an oriental and original twist. Scones appear alongside the likes of chicken teriyaki buns, prawn tempura rolls, and tamagoyaki, which can be experienced in the elegant Malt Lounge & Bar on the ground floor of the hotel. 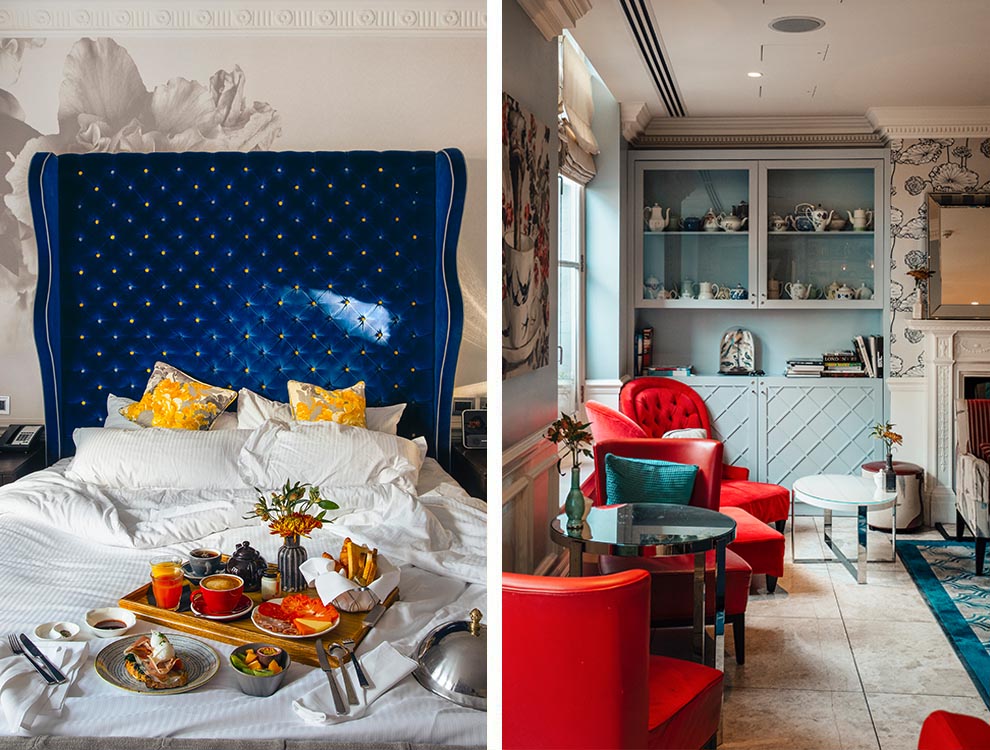 There’s more than a hint of Victorian whimsy about The Ampersand Hotel – filled with vintage curiosities and oozing contemporary elegance, it takes its design cues from London’s most famous museums (with the V&A, Royal Albert Hall and the Natural History Museum for neighbours). Rooms are intimate and stylish, while the upper floor suites have intricate interiors inspired by geometry and ‘Mary Poppins’ views of the city skyline from the large windows. Brimming with botanical references, the centrepiece of the Deluxe Studios is the enormous royal blue velvet headboard, backed by floral wallpaper which sets the perfect scene for breakfast in bed – whether you opt for a Full English or American pancakes with honeycomb and bananas. Sit down to a Science Museum-themed afternoon tea in the delightful drawing room for a family-friendly take on this quintessentially English tradition. 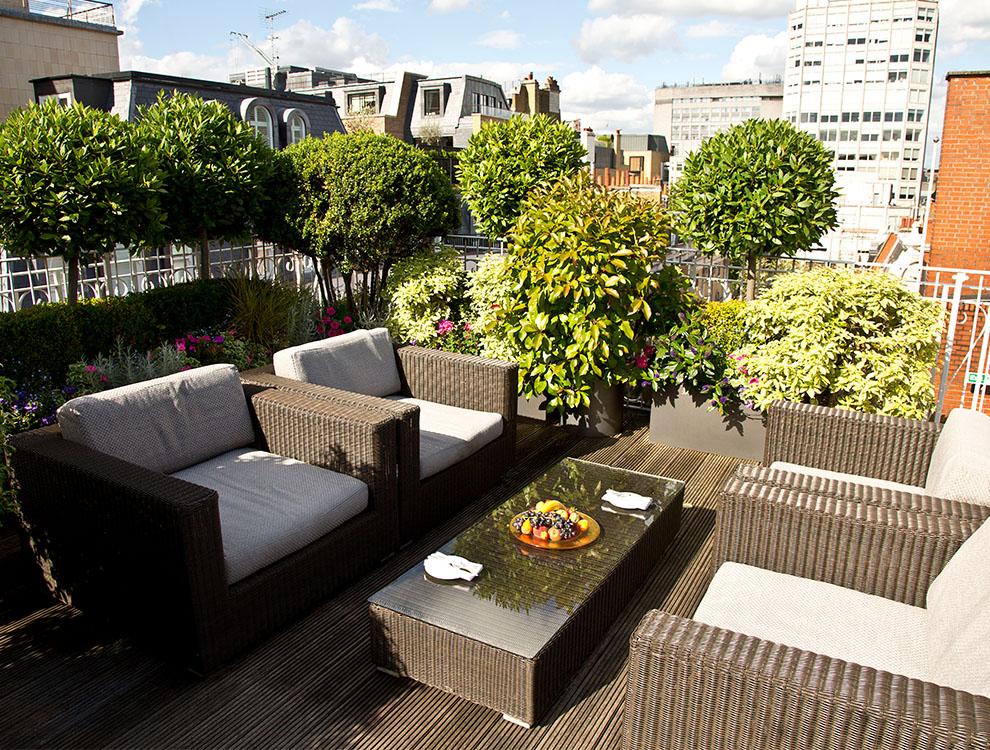 City sunbathing? The Penthouse Suite occupies the entire seventh floor of the St. James’s with a panoramic terrace and is reached by its own private lift.

Perfectly positioned in a peaceful road close to Mayfair and Piccadilly, St. James’s Hotel & Club is a hidden gem set in an elegant Victorian townhouse. Shop ’till you drop in the exclusive boutiques on nearby Jermyn Street and Bond Street, pop into Fortnum and Mason for some edible treats before returning to St. James’s Hotel for a delicious gourmet dinner in Seven Park Place by William Drabble – which has held a Michelin Star since 2011. Drabble’s 1840 afternoon tea transports diners to Victorian times and more specifically to the year this tradition originated, when Anna Russell, the Duchess of Bedford and great friend of Queen Victoria, complained of a ‘sinking feeling’ and started inviting friends to join her at Woburn Abbey for cakes and tea in the mid-afternoon. Classic Victoria sponge cakes, custard tarts, and Cheshire cheese scones are given a modern twist, washed down with a cup of an exclusive fine loose tea blend from The East India Company – created especially for the hotel – or something fizzy. 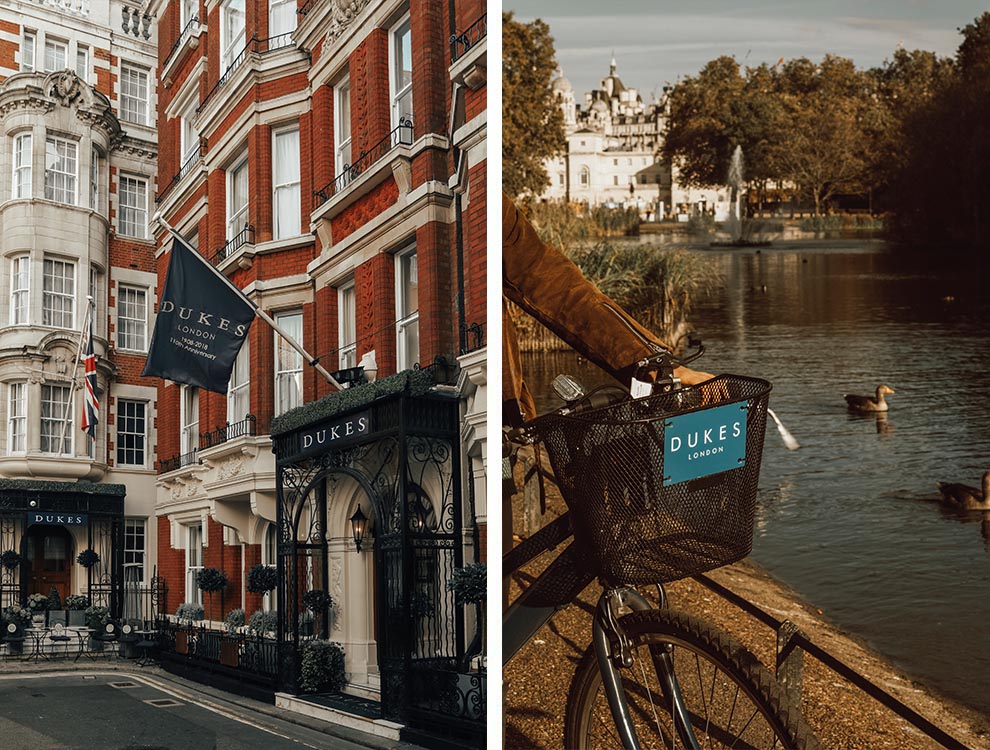 A sophisticated home-from-home in the heart of the city, the pretty red brick Victorian exterior of DUKES LONDON evokes a time when artists and writers rubbed shoulders with royalty in fashionable St. James. Make like a modern aristocrat and book The Duke of Clarence Suite for grand views over Green Park, or treat yourself to the Duchess Room Service which is specially designed for solo female travellers. Borrow a bike from the hotel and cycle around St. James’s Park, visit the royal palaces with a behind-the-scenes private tour led by a hotel guide to hear the stories of the kings and queens who called them home, before shaking things up at the James Bond-approved martini bar or the MarTEAni Afternoon Tea served in the elegant Drawing Room overlooking a peaceful courtyard garden. 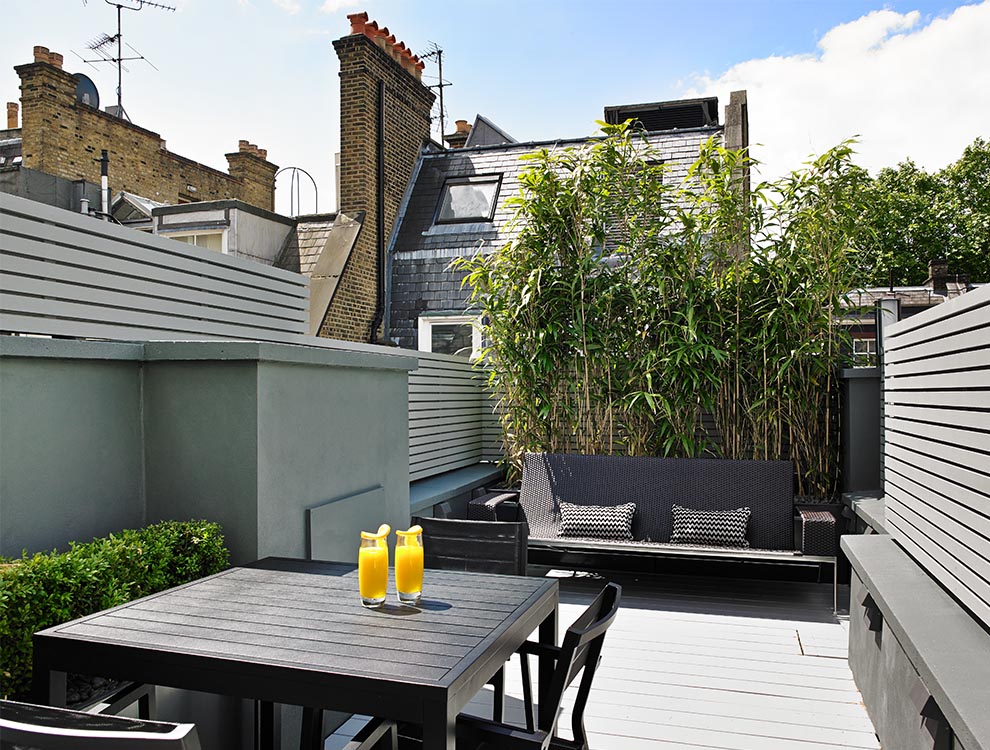 Look no further than the Flemings Mayfair Penthouse terrace for a stylish sun trap.

Blending English charm with cosmopolitan style, Flemings Mayfair was originally a terrace of elegant Georgian townhouses which have been lovingly refurbished with sumptuous interiors. A feeling of 1930s glamour runs throughout the sumptuous interiors, from silk curtains to vintage-style patterned and textured wallpapers. When the sun comes out, have the hotel assemble a signature picnic hamper and head to Green Park – stopping to admire Buckingham Palace, just a few minutes away. For a more formal affair, reserve a table at the hotel’s award-winning restaurant Ormer Mayfair, for an eight-course dinner tasting menu which celebrates seasonal British produce. 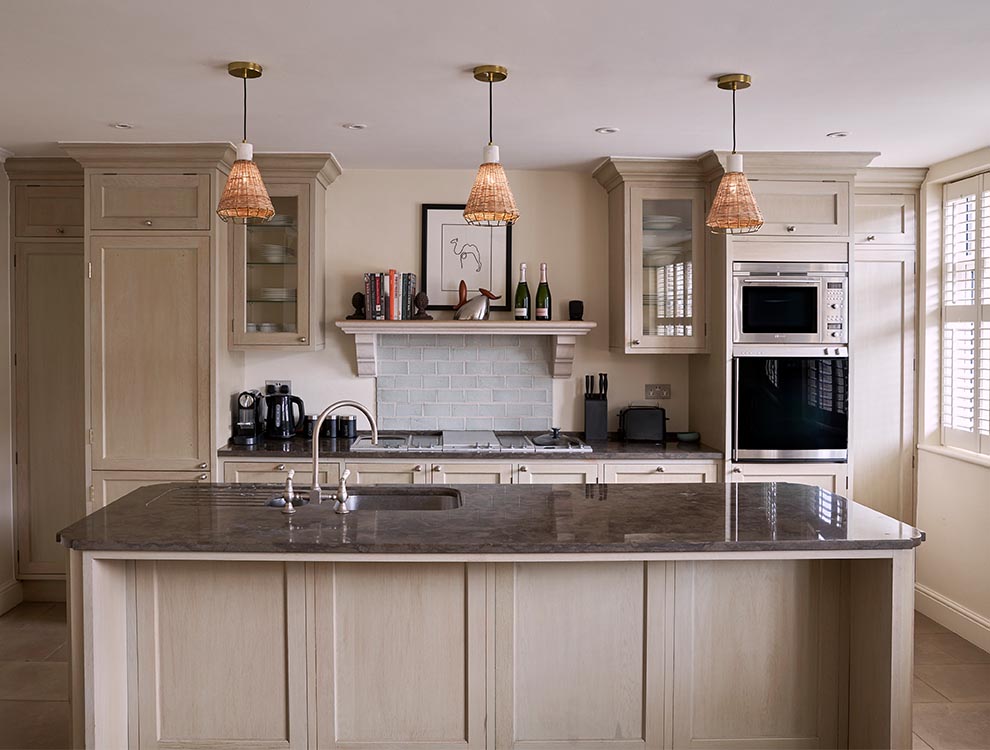 Your luxury home-from-home awaits at The Capital Hotel, Apartments & Townhouse.

Just yards from the fashionable Harrods, Harvey Nichols and Sloane Street, The Capital Hotel, Apartments & Townhouse boasts an incredible location in the heart of Knightsbridge. Each one of the contemporary-meets-classic rooms is individually designed, while the twelve key Capital Townhouse has its own off the street entrance separate to the main hotel along with fully-fitted self-catering kitchens for a luxury apartment experience like no other. Guests who book The Platinum Jubilee Package will be welcomed with a ‘Royal Tipple’ for two, treated to a traditional afternoon tea and Full English breakfast, as well as enjoying a complimentary upgrade. Stay dates start from the 1st May and run until the 30th June 2022. 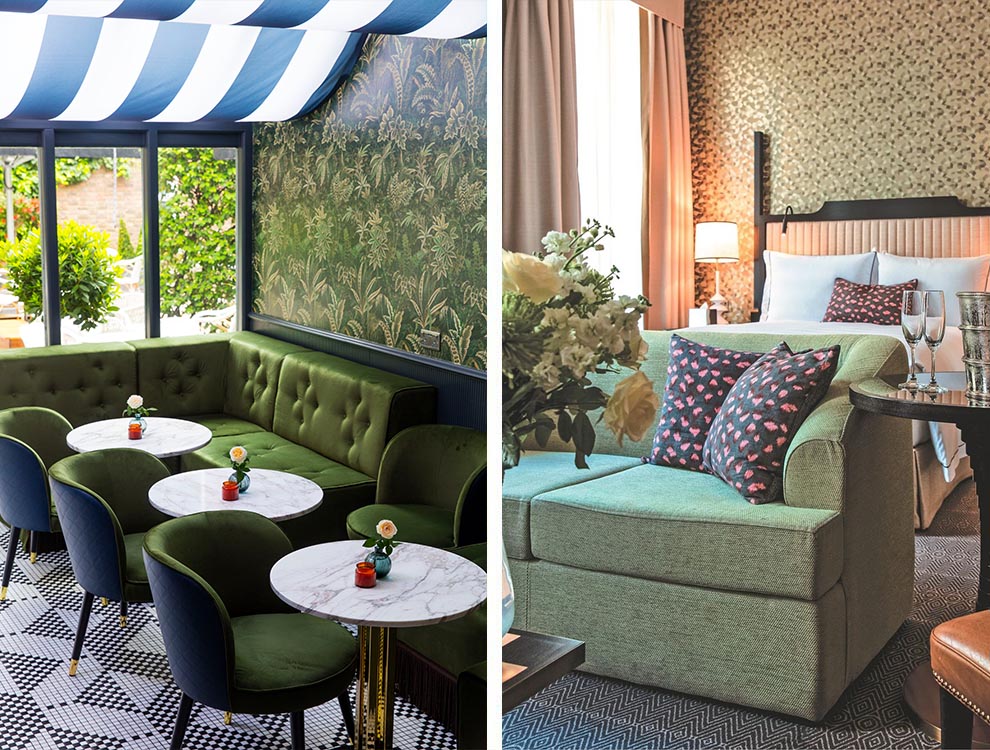 Tucked away in the literary and intellectual heart of the capital is the Grade-II listed Academy Hotel. From the outside, this London townhouse seems straight from a Georgian period drama. Yet step inside the door, and you’ll discover contemporary interiors by New York-based Champalimaud design. The outdoor courtyard is a West End hidden gem, a sun-soaked spot to enjoy the hotel’s quintessential afternoon tea or a tipple from the extensive drinks list of speciality gins and bespoke cocktails. On a summer’s day, you’re just a short stroll away from London’s oldest garden square – picnic blanket and champers hamper at the ready!