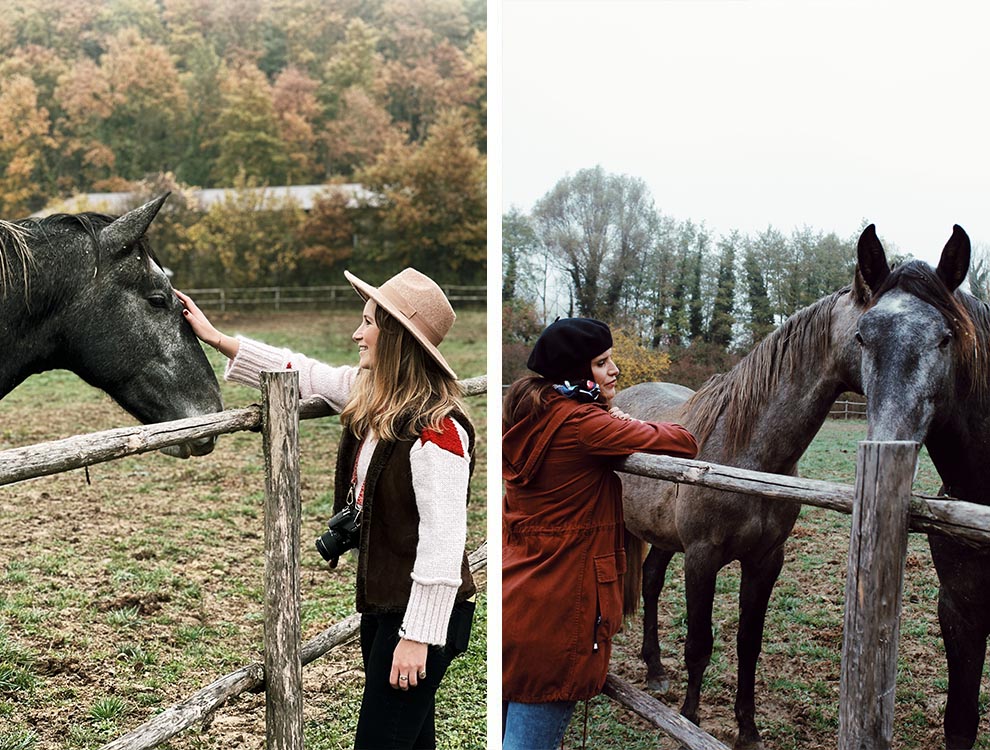 Like any good fairytale, this ancient castle-turned-hotel has a story stretching back to Charlemagne, brimming with romance, noble steeds, and a touch of magic. The family who live here could also be characters straight from the pages of a storybook – the title of Conte di Reschio has extraordinary origins, intertwining the Corsini name with the castle in 1730 which would then return almost three centuries later when Nencia Corsini married Count Benedikt Bolza. Fate works in mysterious ways, but the chapters of this fairytale could not have come together more perfectly. 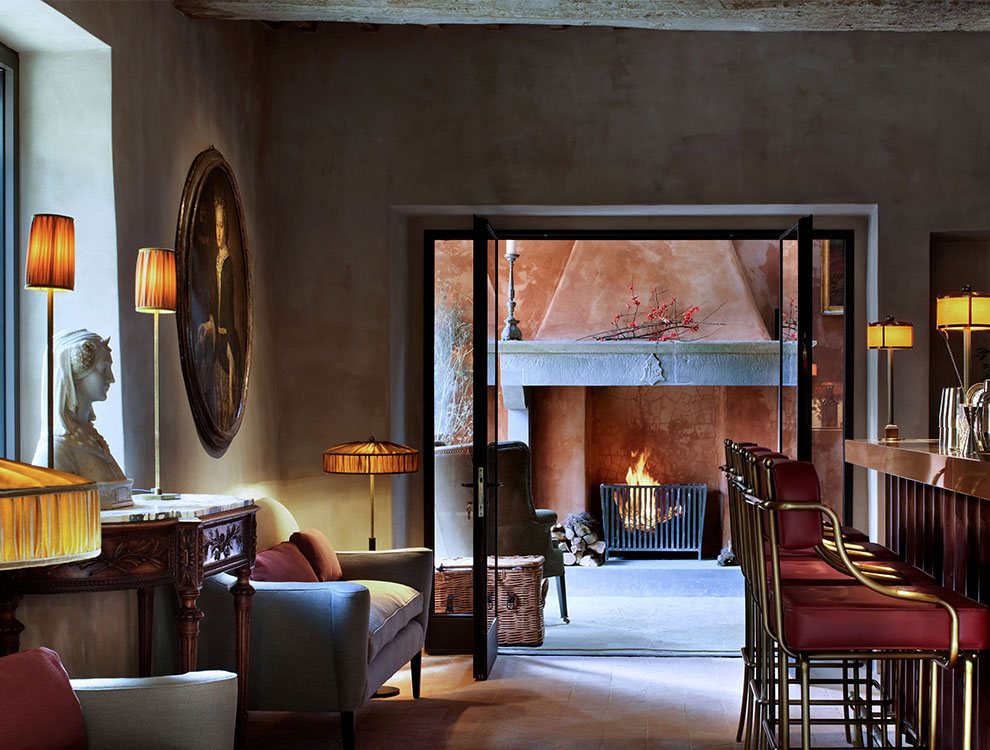 Today, you will find architect and artistic visionary Benedikt in the estate’s Tabaccaia, the 1940s tobacco warehouse which has been converted into a creative studio where his designs are handcrafted by local artisans and so beautifully brought to life in every corner of the meticulously restored castle, while Nencia handpicks wild flowers and arranges pretty bouquets beside a baronial fireplace to welcome guests and bring the surrounding Umbrian countryside into the hotel’s 36 rooms and suites. It was the warmth of this fire that greeted us when we arrived on a crisp November evening. The soft glow of the 11th century castle walls could only just be seen through a thick shroud of mist encircling the estate, which did not lift until mid-morning the following day. As if by magic, the 1,500 hectare grounds were slowly unveiled to us from the panoramic Ristorante al Castello while we breakfasted on foraged berries drizzled with the hotel’s organic millefiori honey and freshly baked pastries, as the mist retreated across rolling hills dotted with umbrella pines, olive groves, and rustic farmhouses which the B.B. for Reschio team are currently transforming into private homes on a bespoke basis. 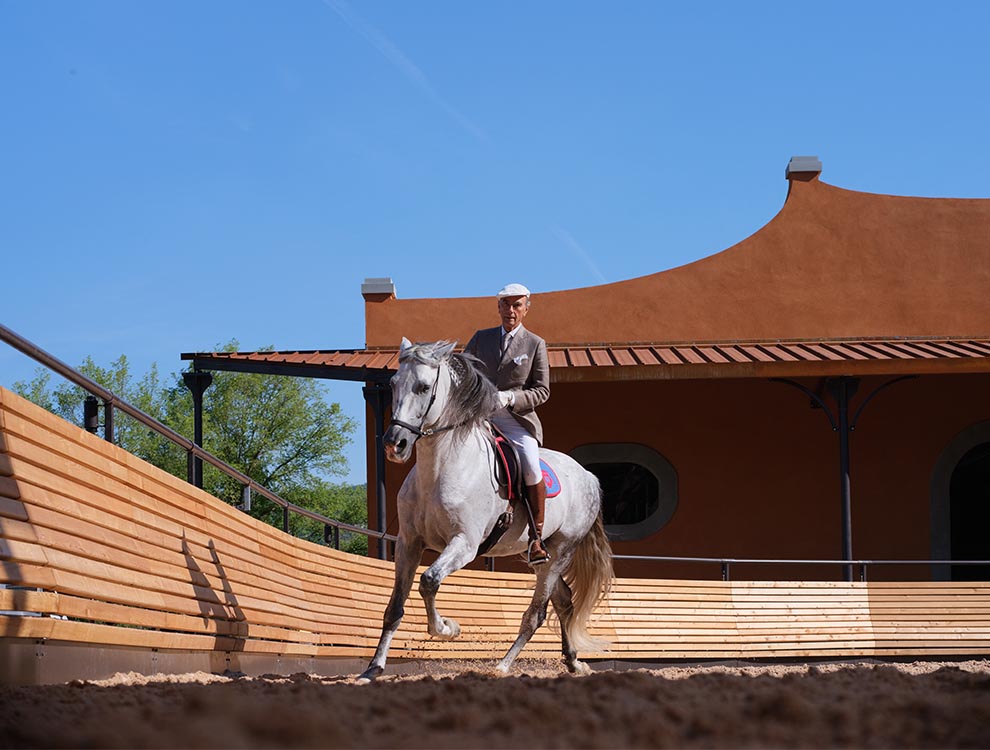 The distant sound of horses whinnying and clip-clopping drifted across the auburn treetops on the late autumn wind, drawing us towards the state-of-the-art stables which house 40 pure bred Spanish horses belonging to Benedikt’s father and founder of the estate, Count Antonio Bolza. Inspired as a boy by the famous Lipizzaner horses of Vienna, Antonio founded his stud in 1999, and now Reschio is home to some of the world’s most skilled dressage horses who dance before the Bolza family and their guests – seated in a carnivalesque tent with cocktails in hand – during weekly dressage displays led by the estate’s master of the horse, Antonello Radicchi and his wife, Francesca. 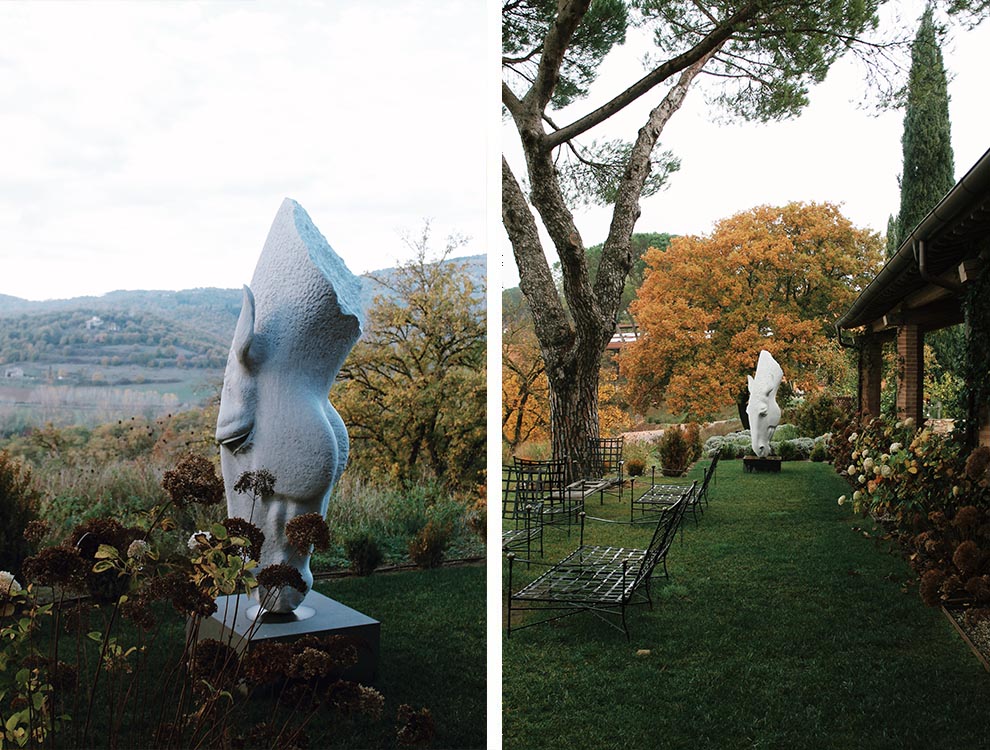 The manège is overlooked by one of Nic Fiddian-Green’s colossal equine sculptures, which are carved in bronze, copper, and Carrara marble then finished in the artist’s studio on the Umbrian hills or in the workshops of Pietrasanta. These gravity-defying works by the English sculptor found in quiet corners of the estate could not speak to their setting more eloquently, and yet stir such a deep sense of stillness and serenity within the viewer.

Standing less still was my midnight black Italian stallion Squalo, named ‘Shark’ not for his intimidatingly beautiful appearance, but for his affectionate nibbling of sleeves and chomping at the bit and just about every tree or bush you pass by. One of the older residents of the stableyard at a gentlemanly age of 20, Squalo brought up the rear as we headed out behind the dazzlingly white Serena down cypress-lined trails. The best way to explore the estate is undoubtedly by horse, where you can feel the wind in your hair and hear the snuffling of wild boar in the undergrowth – the friendly team of multilingual instructors are raring to take more experienced riders out on guided hacks through the misty wilderness. 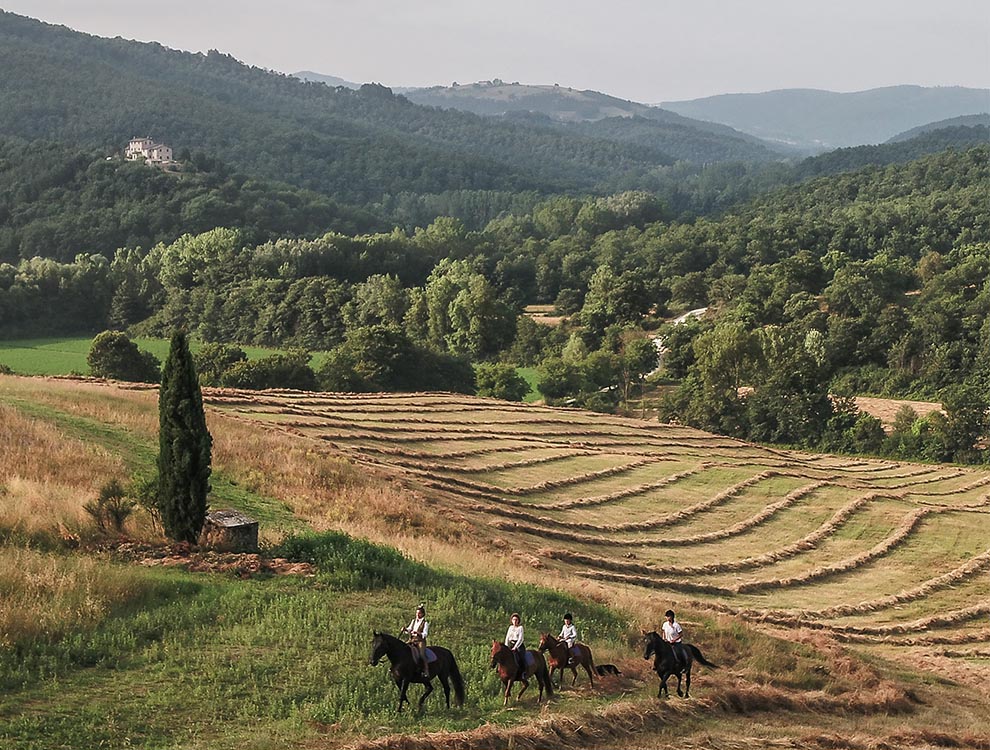 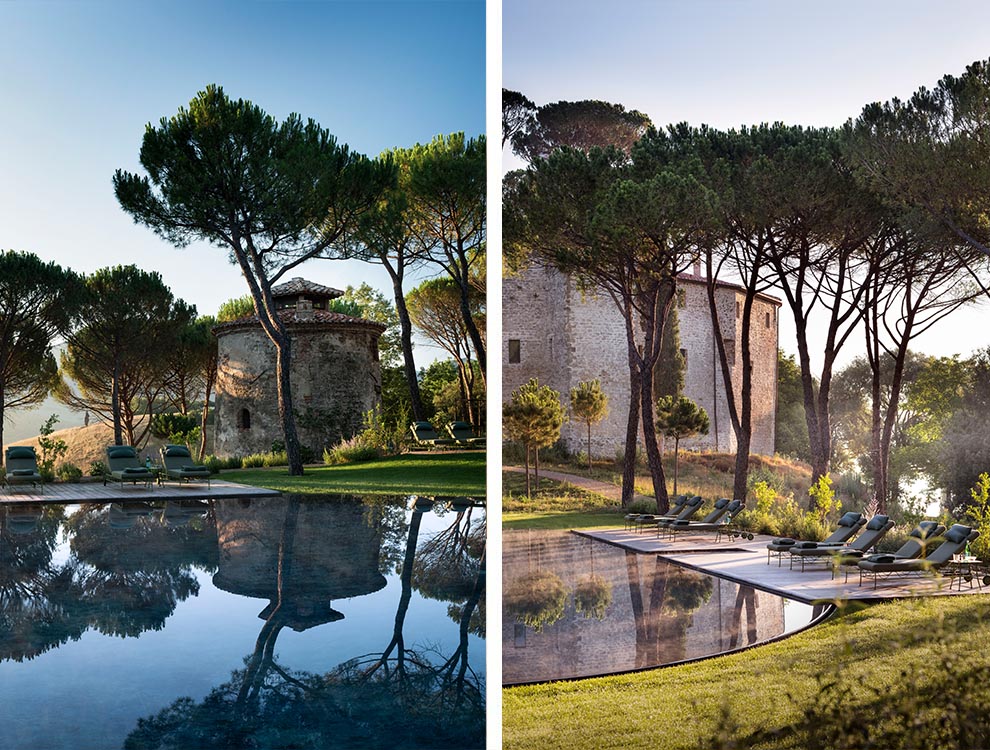 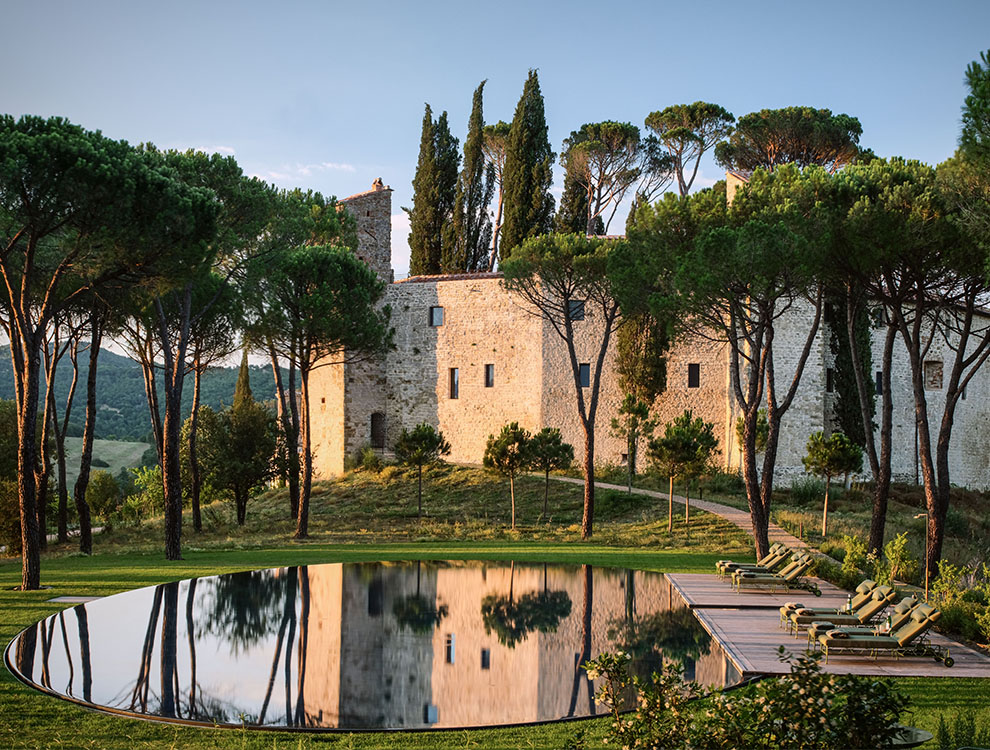 After an energetic morning in the saddle we spent a languid afternoon on the lime green loungers by the pool, which sinks into the verdant lawn like a miniature moat, reflecting the castle’s ramparts in its mirror-like surface and sending steam into the air as the water gently overflows the stone rim of the pool to the grass at its edge. Freshly-squeezed juices and cocktails, creamy gelati and made-to-order panini appear as if by magic from Il Torrino, the former watchtower which has been given a new lease of life as the pool bar to refresh swimmers and sunbathers. 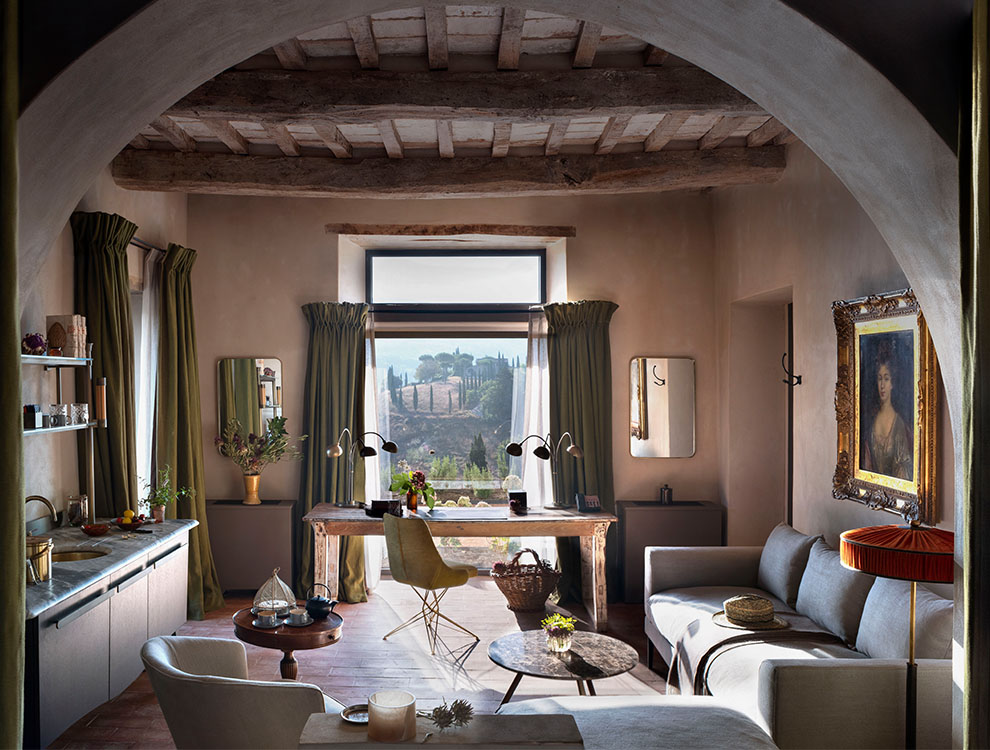 With tummies full of handmade truffle pasta, we retired to our freestanding bathtubs, which have been perfectly positioned beside shuttered windows, and four-poster beds for a night of sweet slumber, swathed in the softest sheets which are hand embroidered in a royal red thread with ‘C di R’ – just one of the many examples of the incredible attention to detail throughout the exquisitely put together interiors which are all overseen by the Count himself. Each of the rooms and suites has been inspired by an ancestor or friend of the family to reflect their personalities through carefully curated curios sourced from local antique markets, portraits, and personal paraphernalia which would have otherwise been gathering dust. 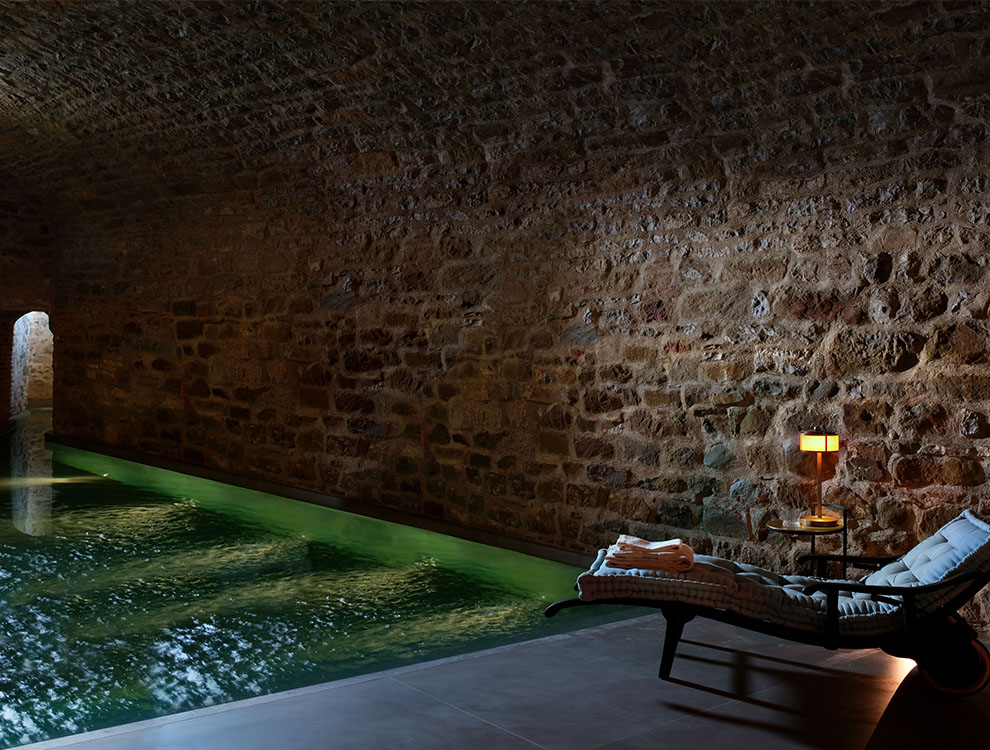 Saving the subterranean spa for the day after our riding to ease any saddle-sore muscles, we descended the worn, stone steps into the depths of the Roman-inspired Bath House. Wellness sessions are reserved in 45-minute slots to ensure guests have the spa to themselves, which sits within the walls of the castle’s old wine cellars. Atmospheric shafts of sunlight slant across the salt-water pool, which is also moodily lit by melting candles around the stone arches which somehow withstand the pitter-patter of the cascading tropical rain shower. There is no spa menu here, as treatments are completely personalised to each and every guest – from massages and facials to traditional bathing rituals. 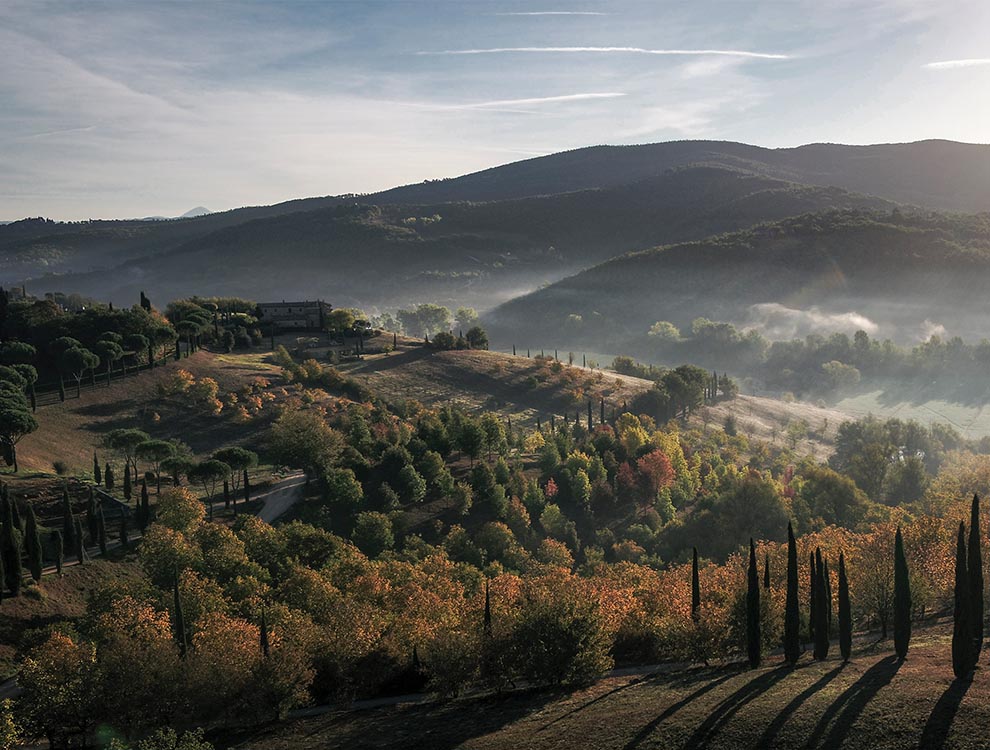 Once we’d sweated out the previous evening’s Merlot, which is harvested from the estate’s vineyards, in the fragrant Swedish-style sauna handcrafted from Mediterranean oak, we returned to ground level to flit between the plant-filled Palm Court and the Boot Room with its roaring fire. There is something primeval about spending an evening beside a fire, and though many might choose to visit Umbria in the summer, I would argue that the dark November nights we enjoyed at Reschio before it closed for the season were as close to castle-dwelling life as the modern traveller can get.