10 of the prettiest towns and villages in the Cyclades

Scattered across the Aegean Sea like pieces of paradise, the Greek islands which make up the Cyclades are known the world over for their sugar cube buildings, cobblestone streets, blue-domed churches, and quaint windmills. A cornucopia of colourful flowers and pastel painted doors set against striking whitewashed walls, all overlooking beautiful beaches and impossibly blue waters, it’s little wonder that Cycladic architecture continues to draw the Instagram crowd. Here are ten of the islands’ most photogenic places, plus where to stay just a scenic stroll away… 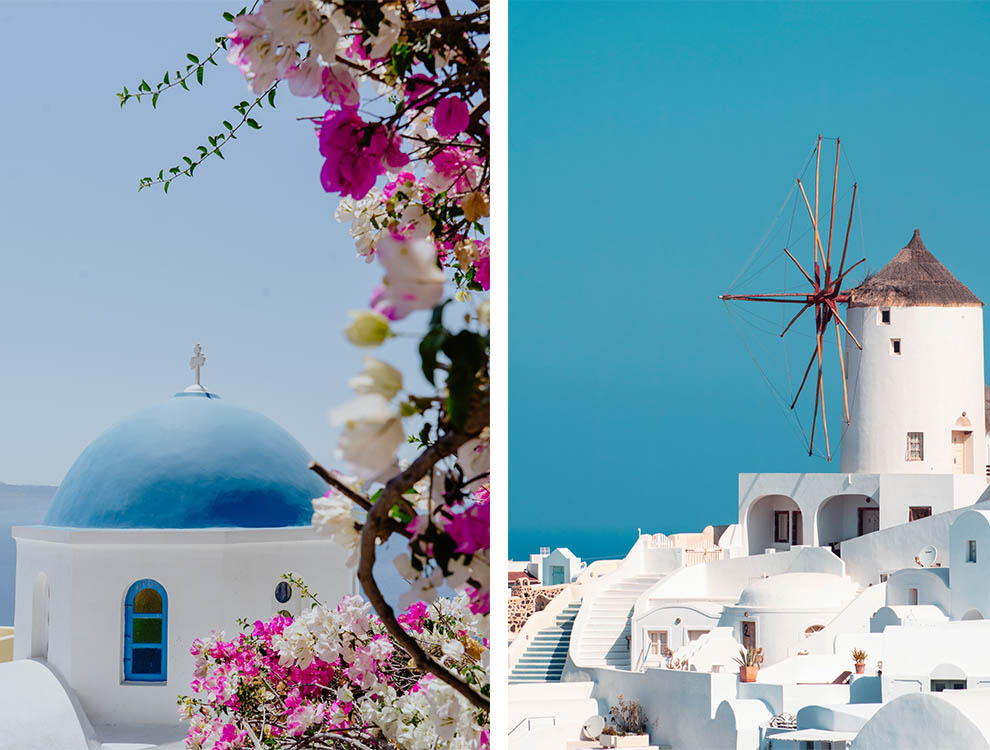 The cliffs of Oia slope down to the deep, clear waters of Amoudi Bay. Look up at Oia from the sea and this enchanting village seems to defy gravity. This is the perfect blend of creative yet classical Cycladic architecture, with traditional white dwellings carved into the rocky slopes of the caldera. There are plenty of art galleries to explore, boutiques to browse, and cafés in which to while away an hour or two. 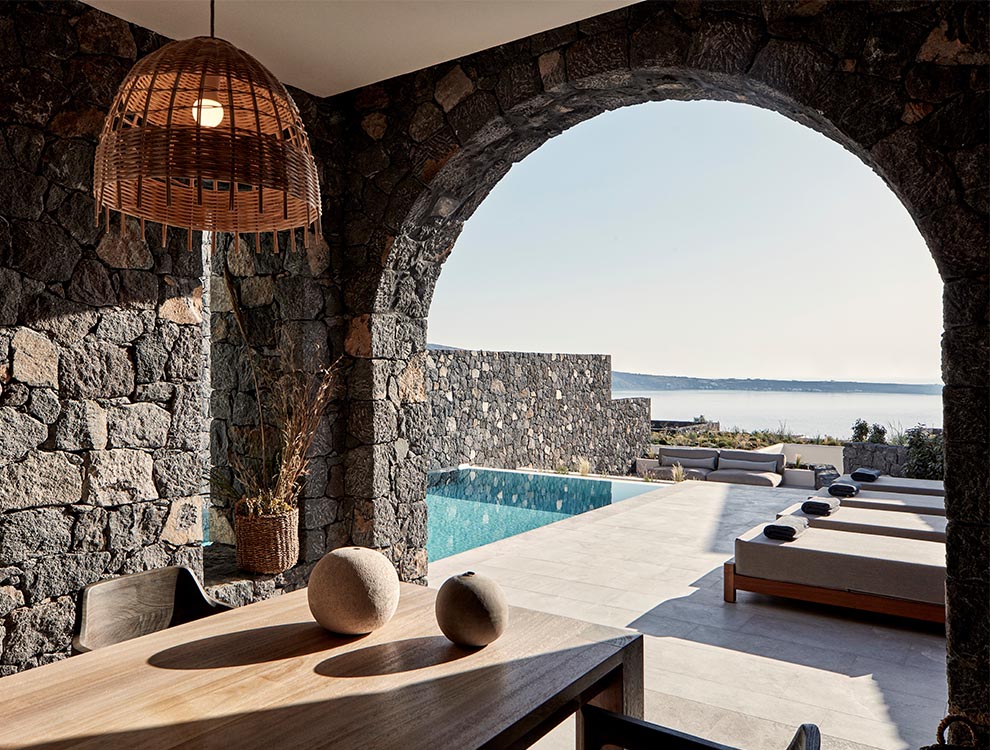 Where to stay: On an island with as glowing a reputation as Santorini, it takes something special to stand out, and the Canaves Oia collection does just that. Boasting the best views of the caldera and the Aegean Sea, Canaves Oia Boutique Hotel, Canaves Oia Epitome, and Canaves Oia Suites are all situated within easy distance of artisan bakeries, boutique stalls, and sandy beaches, and yet feel a world away from it all. 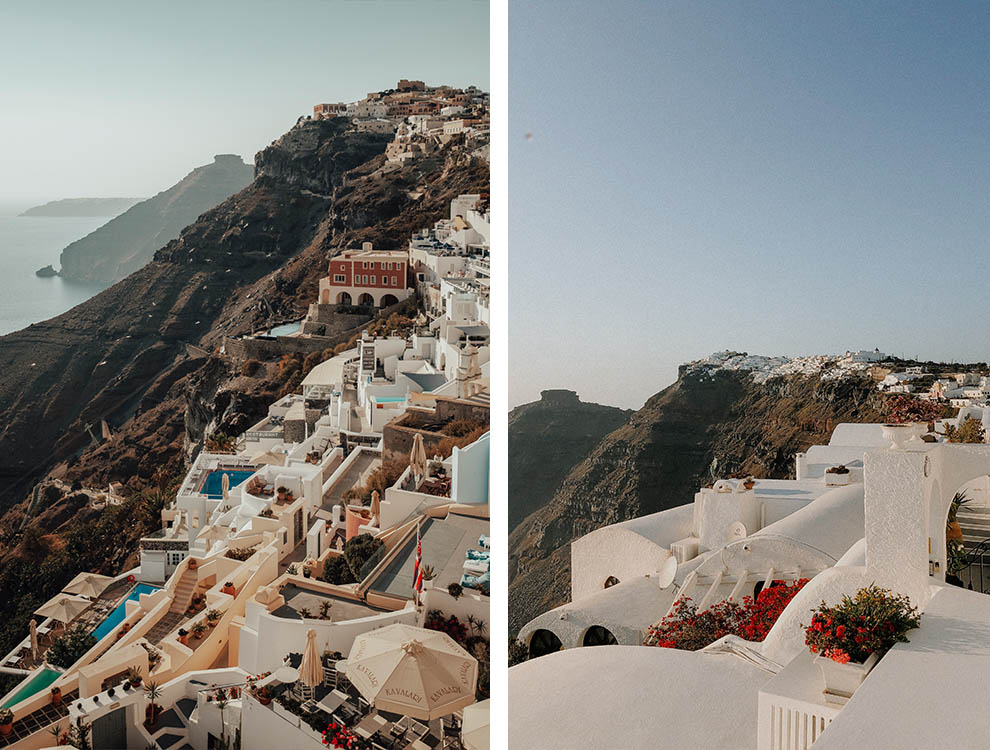 Perched on the caldera’s edge, Fira is Santorini’s cultural capital and a bustling hub of island life. Day and night the meandering streets are brimming with sights and sounds, and lined with shops, cafés and lively tavernas. Walk along the caldera from Fira and you’ll find yourself in pretty Firostefani. This quiet village suburb is the place to see the white-walled and blue-roofed Cycladic buildings that appear on postcards, as well as Santorini’s traditional cave houses. 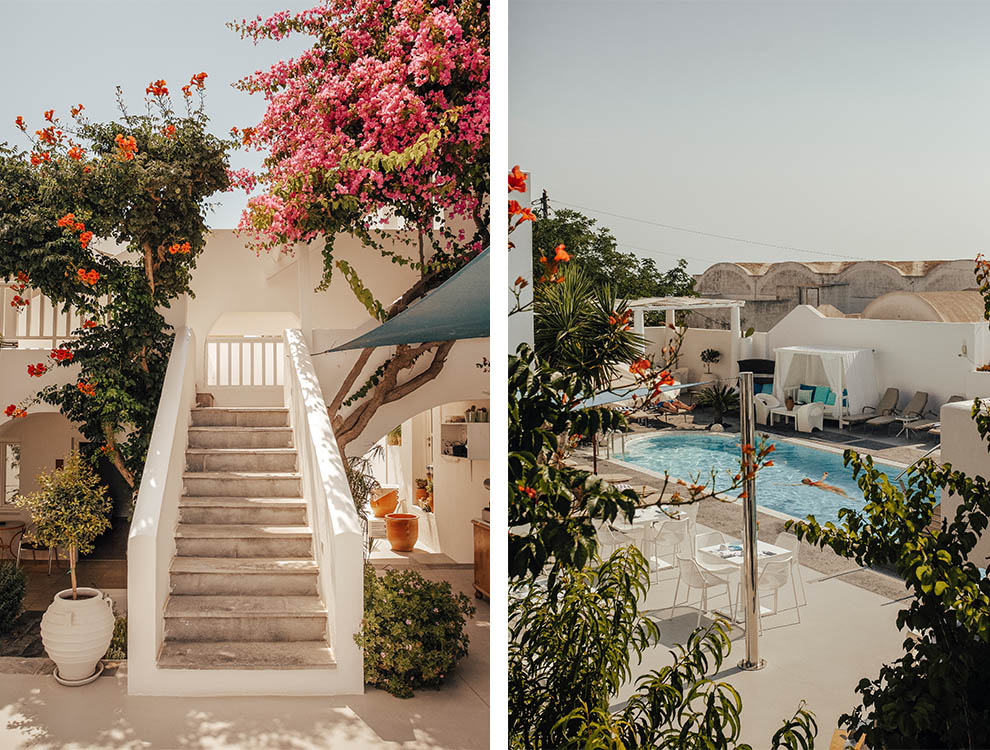 Above: The tranquil outdoor pool surrounded by day beds at Aressana Spa Hotel and Suites. Below: The Cosmo Suite terrace at Cosmopolitan Suites. 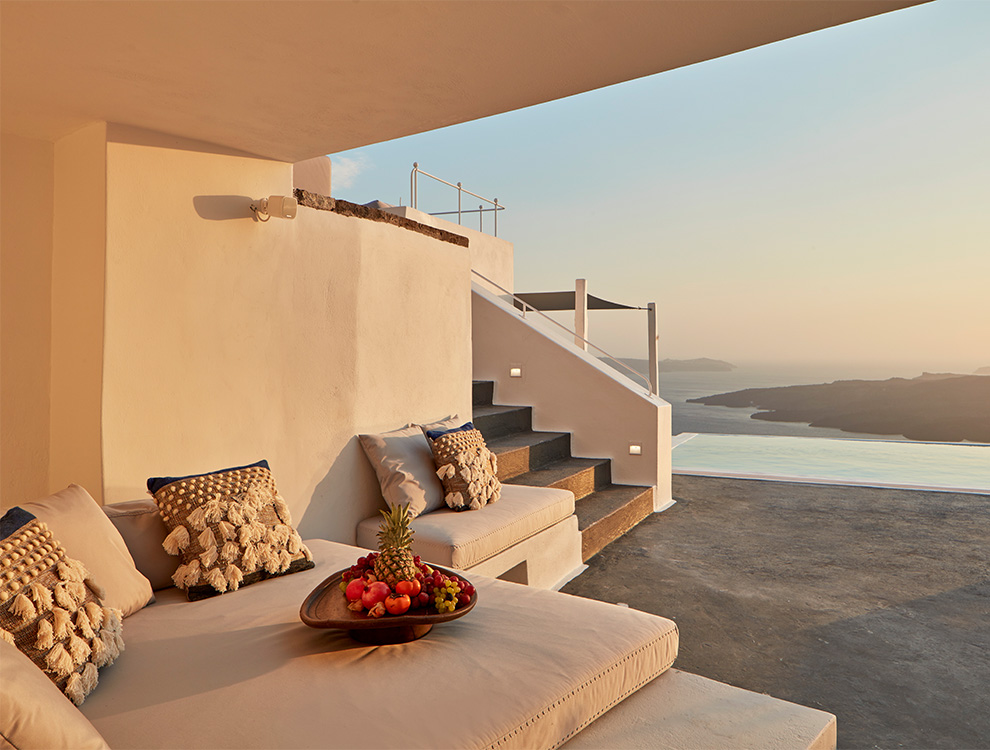 Where to stay: Every room and suite at Aressana Spa Hotel and Suites comes with a balcony or patio providing island and town views, while the stylish Cosmopolitan Suites is set on a cliff edge with breathtaking views of Santorini’s volcano and beyond across the sea. 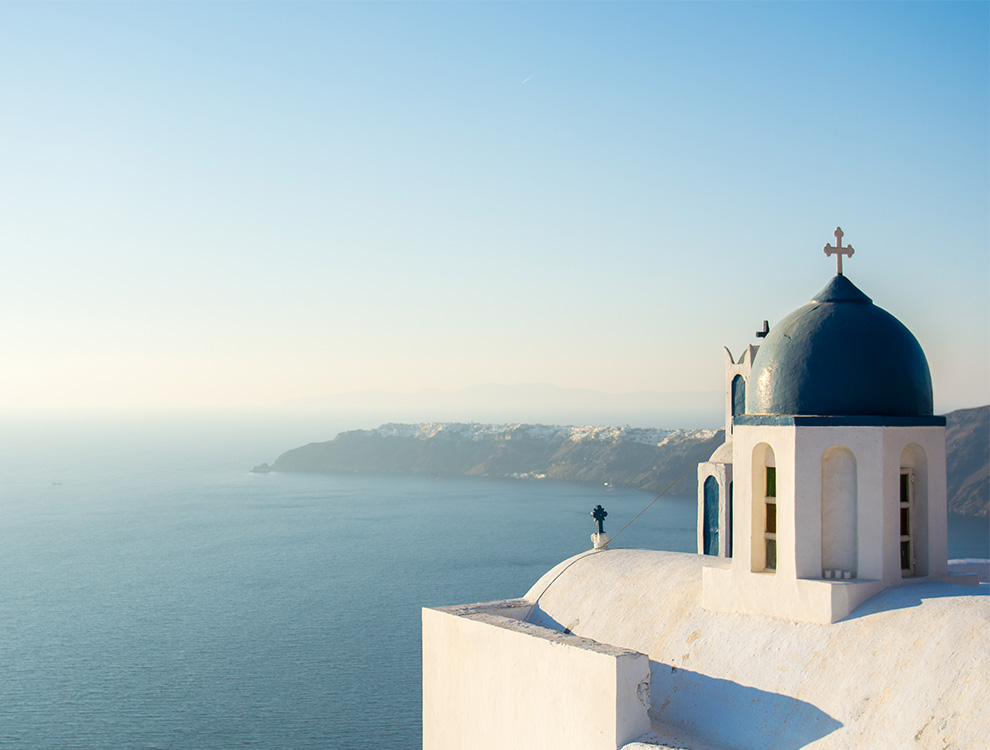 This romantic hideaway lies just outside bustling Fira, with white Cycladic architecture, and historic cave houses carved into the rock. Pack your camera and seek out the iconic blue domed churches, with their archways framing picture-postcard views, or take a boat tour to Skaros Rock – a picturesque outcrop just off the coast of Imerovigli crowned by the ruins of a Venetian fortress, which once guarded the island from pirate raids. 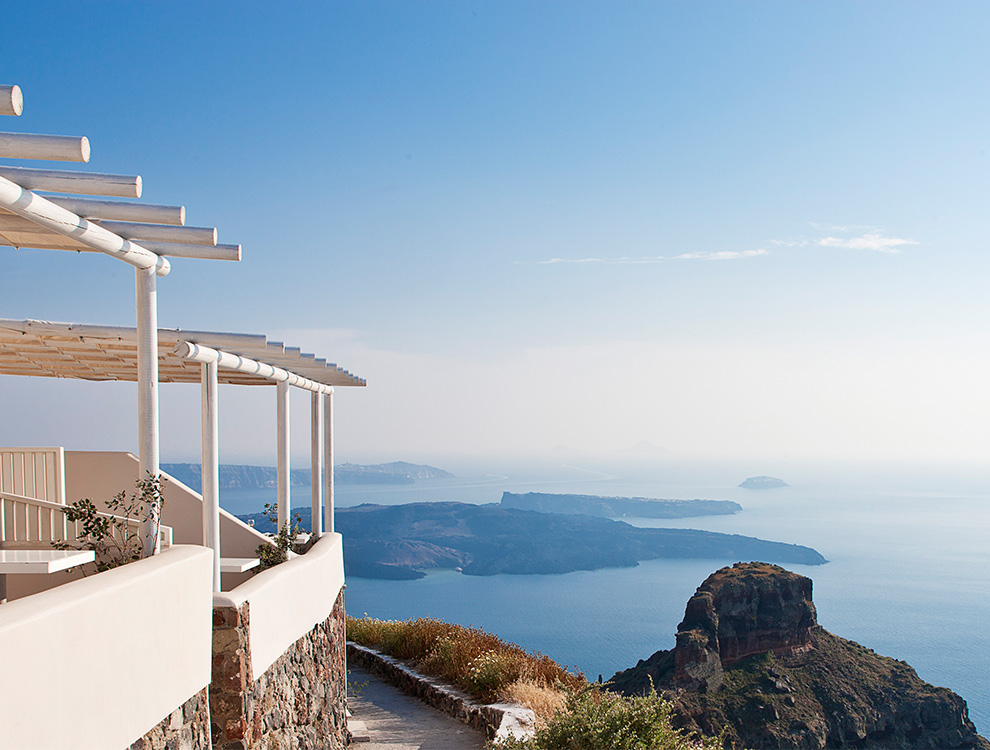 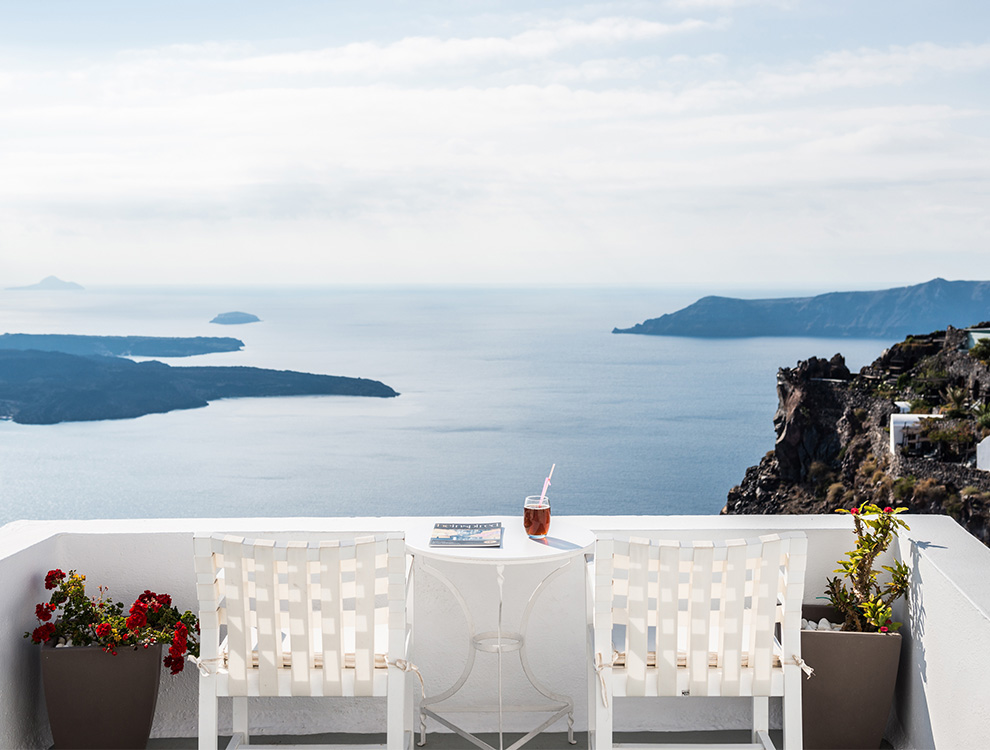 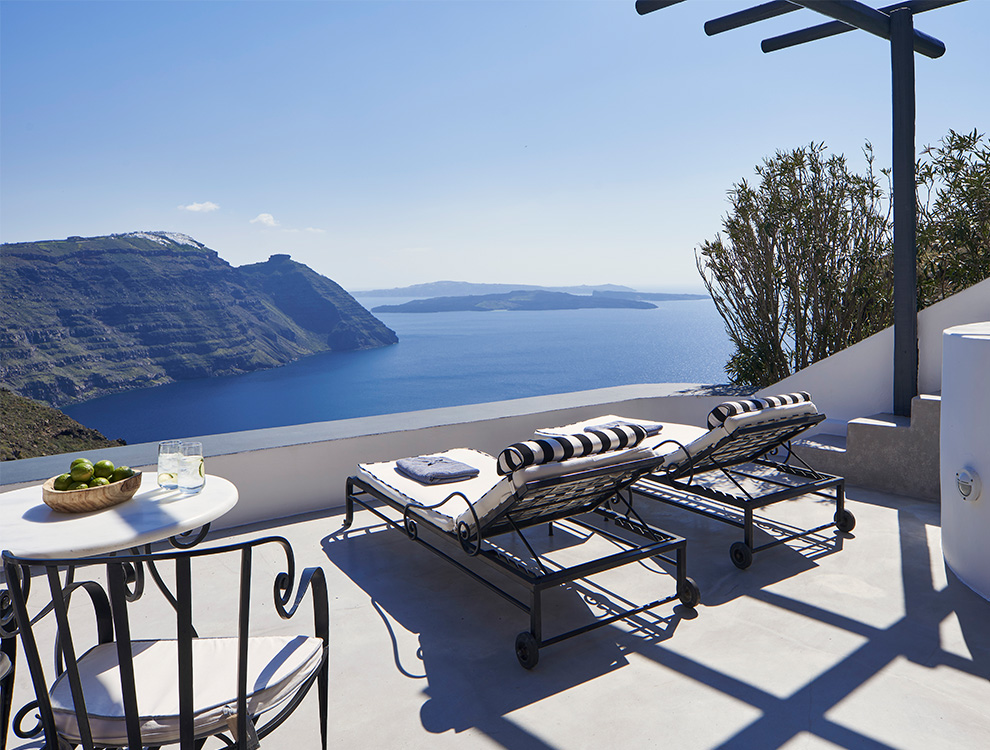 The sun-soaked views from Gold Suites, On The Rocks, and San Antonio.

Where to stay: Set on the highest point in Imerovogli, glitzy Gold Suites faces the majestic Skaros fortress and the Deluxe Suites have their own private heated pool. For an idyllic ‘out of the way’ spot, On The Rocks is carved into the rocks high above the caldera basin where every room comes with volcano views. Meanwhile, the 100-metres-above-sea-level San Antonio is nestled between Imerovigli and Oia and boasts an incredible infinity pool. 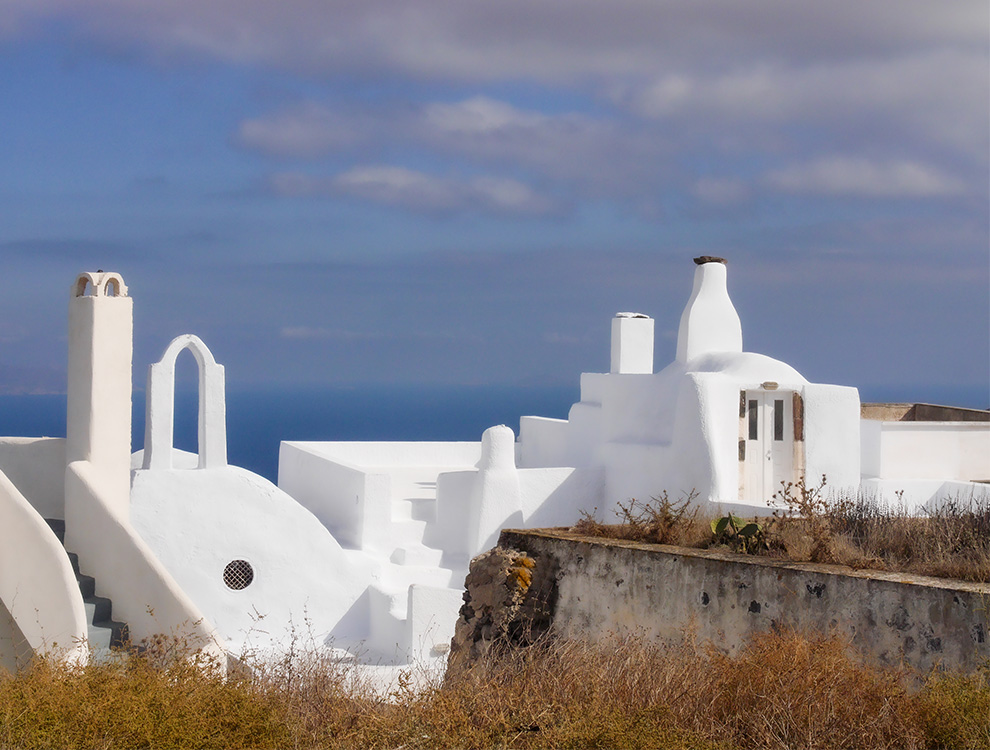 There’s more than a hint of the old, medieval village in modern day Pyrgos. Narrow, meandering streets are lined with tiny churches and traditional tavernas. White Cycladic houses with blue domes cascade down the hillside. And looking over it all is the Kasteli – a Venetian hilltop castle. While you’re there, be sure to peek inside the neighbouring Church of Theotokaki – within the pure, white building are some beautiful frescoes. 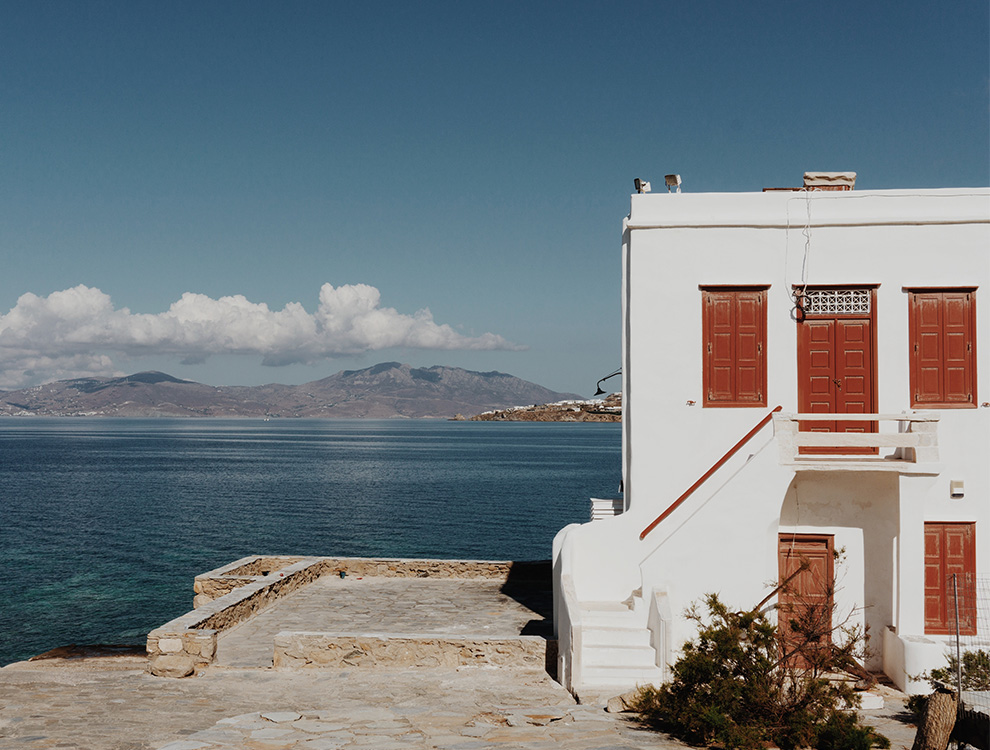 Away from the Kalo Livadi beach bars and tavernas, lies a laid-back, rural community. Take a short drive out to Ano Mera to get a taste of life in one of Mykonos’ oldest villages. Fiercely proud and traditional, its centuries-old charm can be felt everywhere, from the 18th-century monastery of Panagia Tourliani and its museum brimming with icons and trinkets from the Byzantine and Renaissance eras to its distinctive white cubic homesteads and the coffee shops filled with locals. 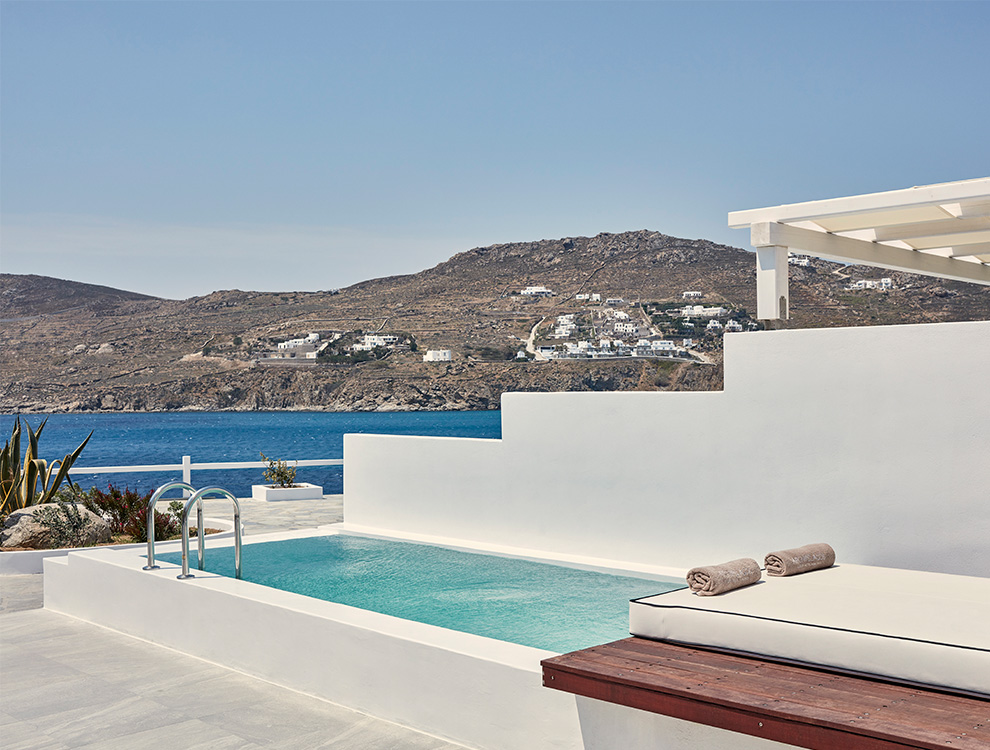 Where to stay: In a prime position facing the sea and Kalo Livadi beach, in the south-east of Mykonos, Archipelagos Hotel is a cool, contemporary haven. The recently renovated interiors are a fresh take on the traditional Cycladic cubic shapes and blue and white colours. 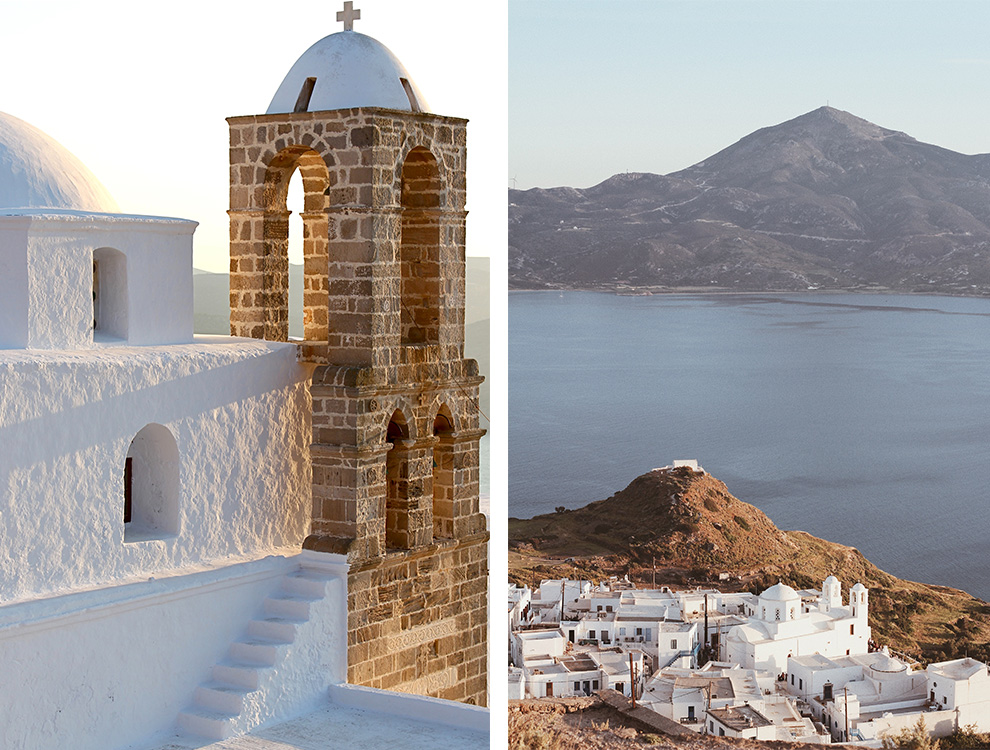 Like all Cycladic islands, Milos is dotted with dozens of churches and chapels – though some of the most impressive architectural examples can be found in the island’s capital of Plaka. As you hike up to the crumbling ruins of a 13th century Venetian castle, you’ll come across Panagia Thalassitra church, one of the most photographed buildings in Milos for its stone bell tower and spectacular setting. Ancient history enthusiasts won’t want to miss the archaeological museum in Plaka – where rare finds sit alongside a replica of the Venus de Milo. 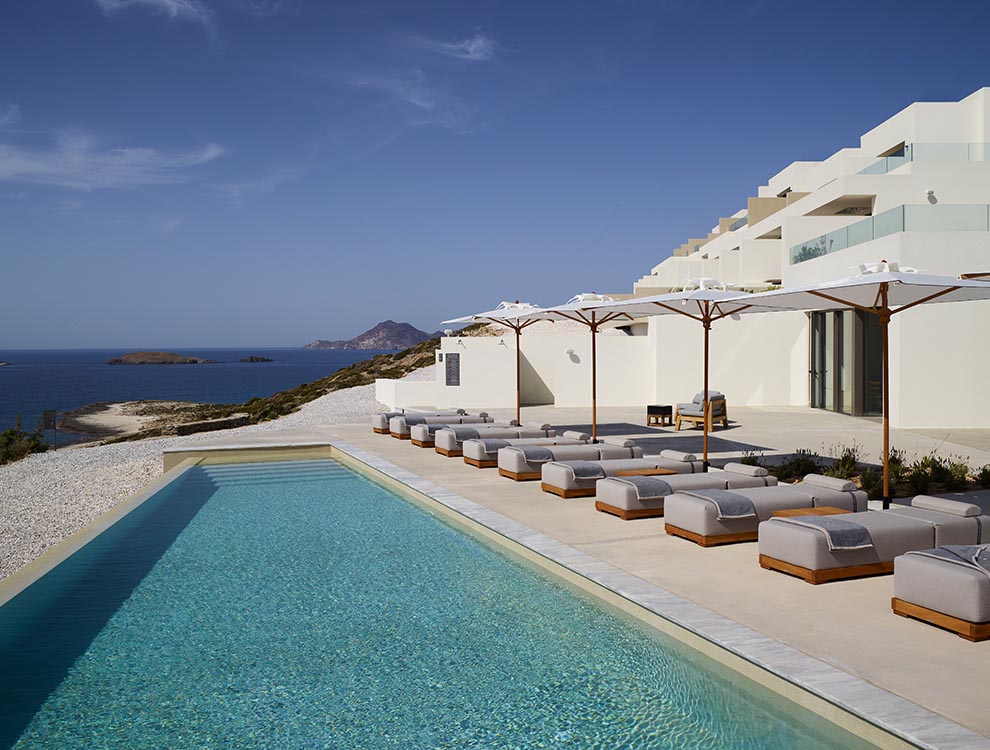 White Coast Pool Suites champions cubist, minimalist design to make the most of its lunar-like setting.

Where to stay: Named for the otherworldly rock formations on its coast, the adults-only White Coast Pool Suites seems to melt into its jaw-dropping surroundings. Throw in its private beachfront nature reserve and an infinity pool for every suite, and ultimate luxury is guaranteed. 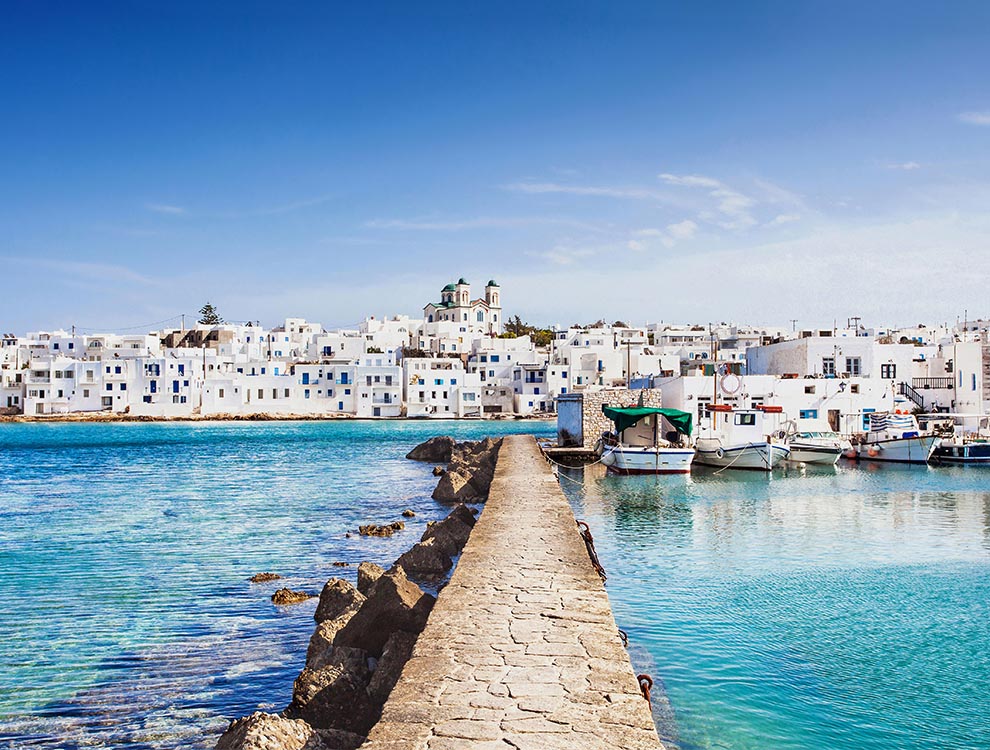 The whitewashed harbour village of Naoussa at the northern end of the island of Paros is as pretty as a postcard. Wooden fishing boats bob in the shimmering sea, octopus hang drying in the sunshine, hot pink bougainvillea climbs sugar-white walls which line polygonal-paved streets, home to a tangle of traditional tavernas and chic cocktail bars. Naoussa is the quintessential Cycladic village, with a more rustic feel than the well-trodden towns in Santorini and Mykonos. 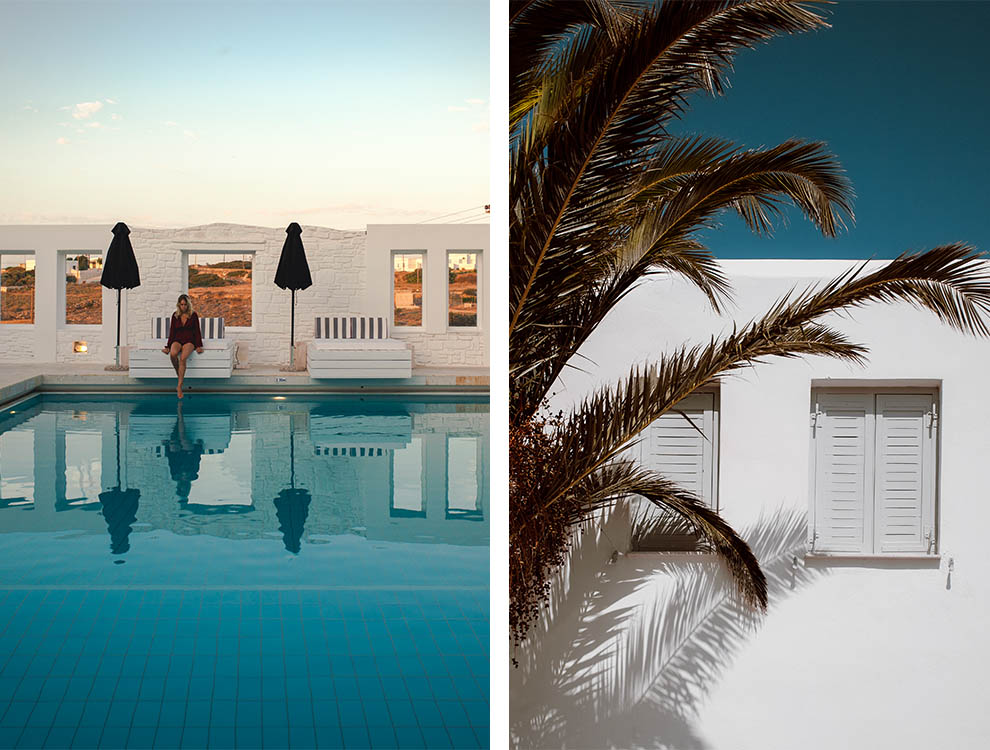 Take your pick of two pools at Mr and Mrs White Paros.

Where to stay: Sat on the edge of Naoussa is Mr and Mrs White Paros, a fresh-faced mix of Cycladic design and cool contemporary touches. The theme is in the name – white-on-white furnishings, floors and features come together in this striking stone statement. 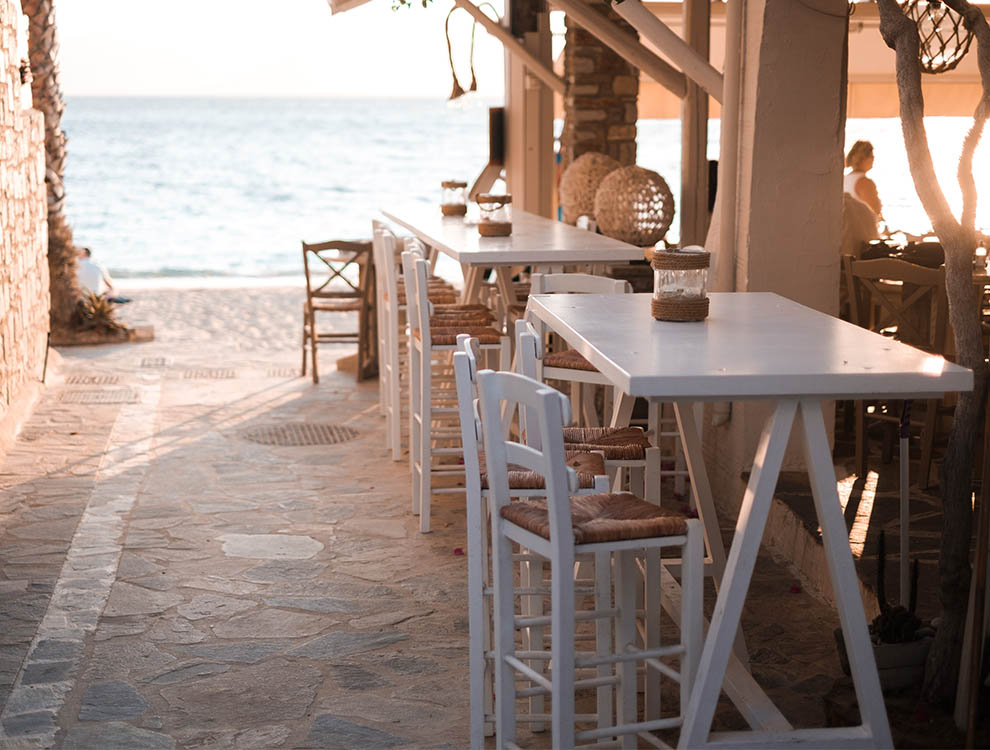 The classically beautiful capital of Naxos lies on the island’s western coast, and has all the authentic charm of a Greek waterfront town. Be sure to stand before the giant doorway of Portara and make a wish, as legend has it the sun god Apollo might just make it come true. As the sun begins to set, go for a romantic stroll along the port’s promenade which begins to light up for an evening of just-caught seafood and lively music. 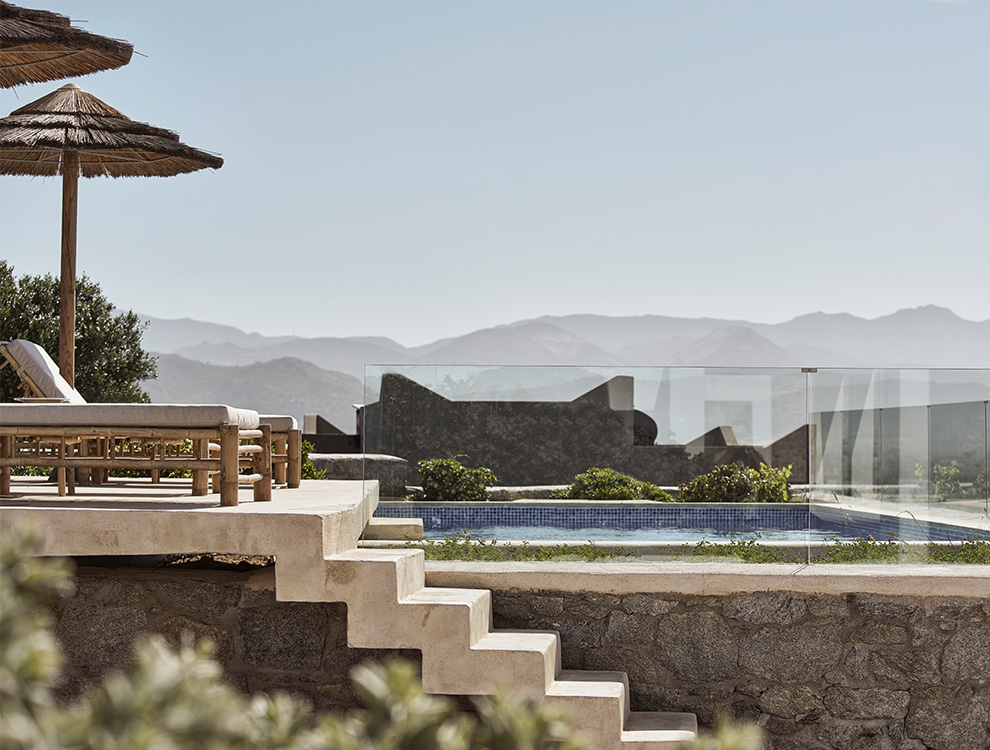 Honeymoon Villa with a private pool at the Naxian Collection.

Where to stay: You’ll be greeted at the Naxian Collection by the family who created this chic cluster of retreats, the kind of place you could happily do very little at all. The lobby bar and restaurant looks across the sea to Naxos town, where you can sit and sip wine, see the cellar where it came from – and even the family’s vineyard that provided the grapes. 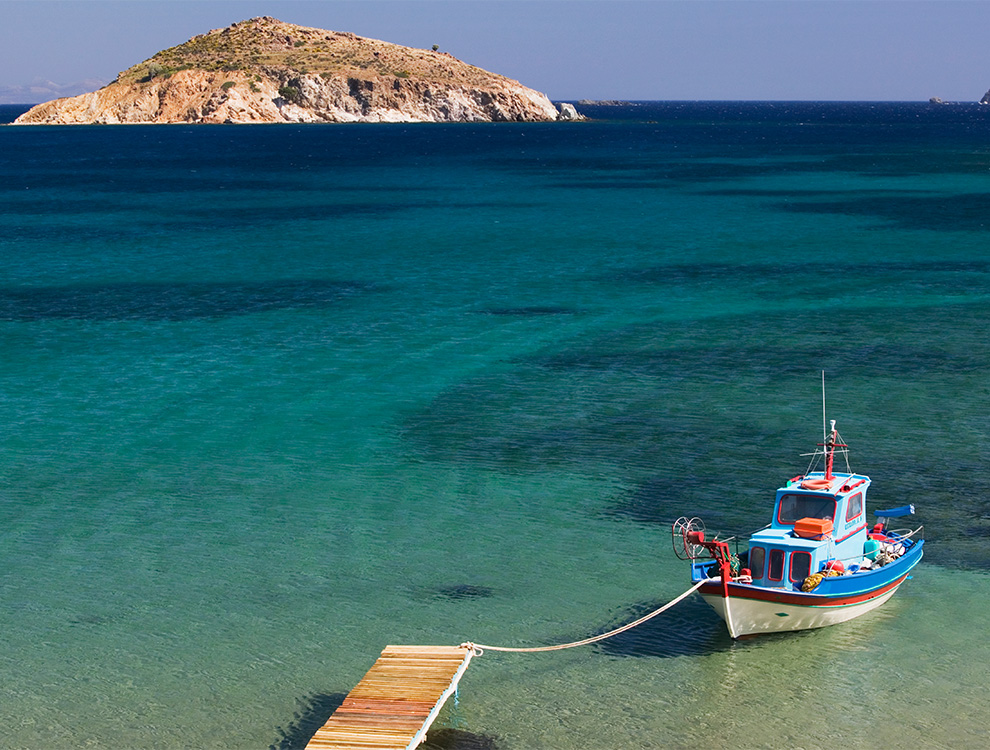 Leave the crowds behind and escape to Grikos – a small fishing village in a stunning setting on Patmos. Its sandy beach, bordered by a tuft of Tamarisk trees, feels like an undiscovered treasure. Sit on the sands and look out at the string of emerald islands in the Aegean, as colourful boats sail by. The village’s gently curving bay, lapped by calm seas, is a simply idyllic spot to soak up the sun as you watch the fishermen return to shore. 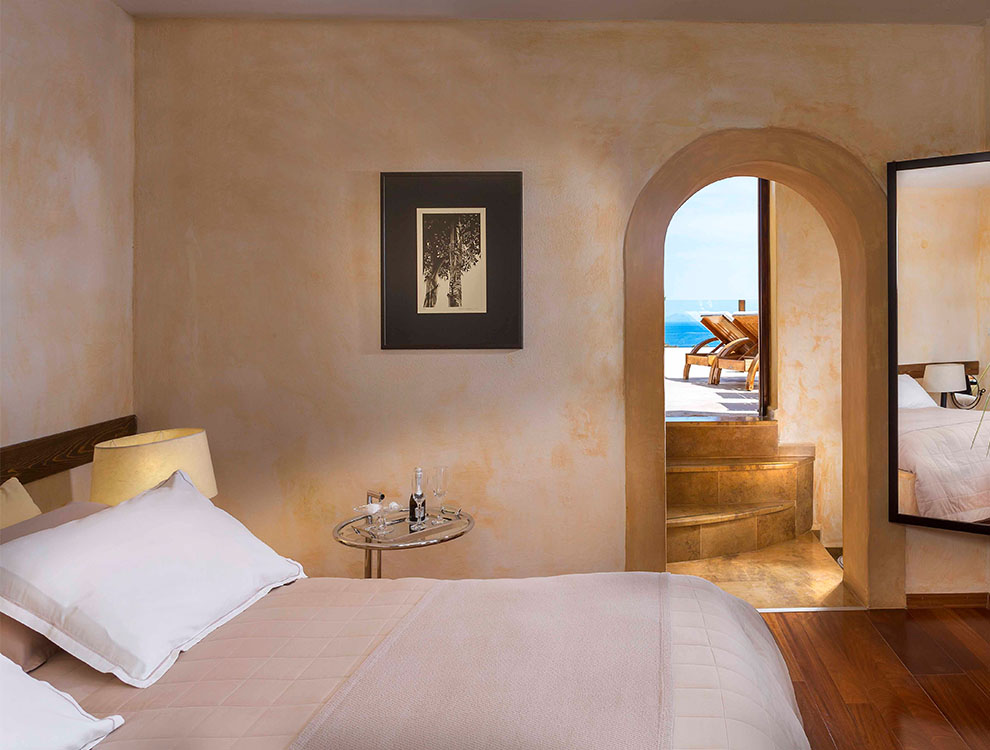 Where to stay: The 11 rooms and suites at Petra Hotel & Suites form a miniature village in traditional island architecture and are contemporary in design with traditional white-washed walls, all within walking distance to the beach. 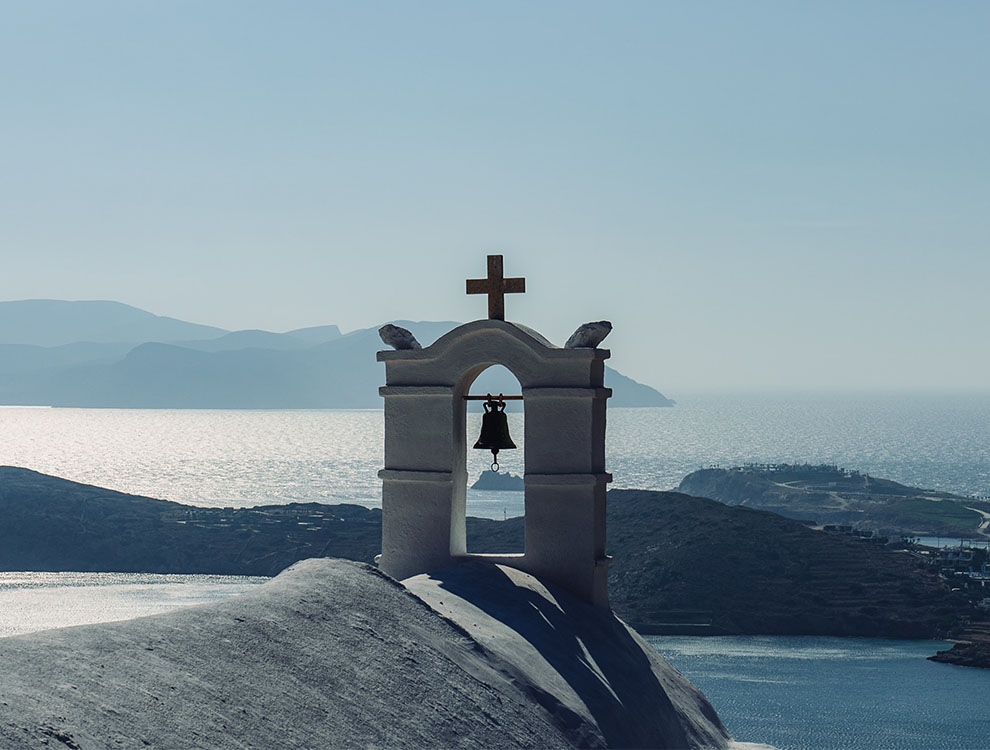 Just an hour’s ferry ride from Santorini, Chora (also known as Ios Town) offers a magical blend of the classic and the cosmopolitan. Whitewashed houses hug the hillside, gazing out across the Aegean Sea. The winding cobbled streets are alive with boutiques, tavernas and bars. And, for history seekers, Chora is peppered with ancient buildings and cultural landmarks. 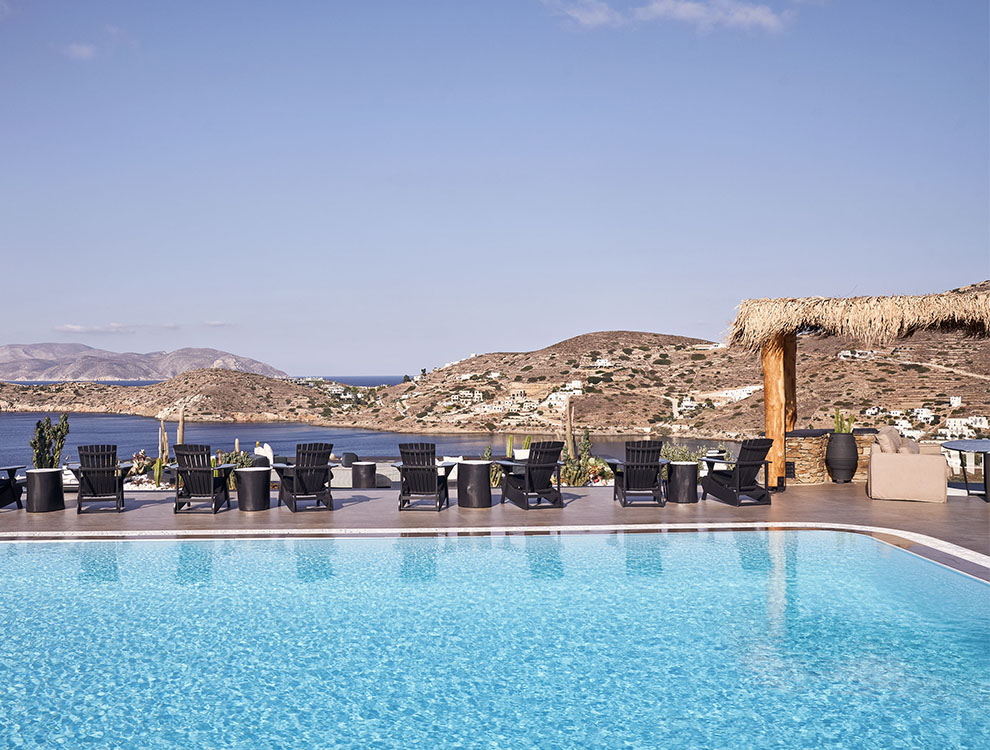 The serene outdoor pool and bar at Liostasi Hotel & Suites.

Where to stay: Simplicity and oneness with nature best describes the experience at Liostasi Hotel & Suites. Minimalist décor places the emphasis on the stunning views framed by the windows, either the rugged beauty of the island or the sparkling blue of the Aegean Sea.