The sky’s the limit: your top views of Bangkok

Discover the most awe-inspiring views in the City of Angels

One of the easiest ways to get your bearings is to visit one of the Bangkok’s über-stylish rooftop bars, restaurants and swimming pools. Bangkok is famed for its rooftops, and some vantage points promise uninterrupted 360-degree panoramas of the city. You’ll spy cutting-edge skyscrapers hugging the curves of the Chao Phraya River, golden spires of ancient sacred monuments glinting in the sun and the changing lights of the Silom and Siam towers winking on the horizon behind the green expanse of Lumpini Park. If you have a head for heights and fancy a refreshingly different experience, here’s where you’ll find some of the most captivating bird’s-eye views. 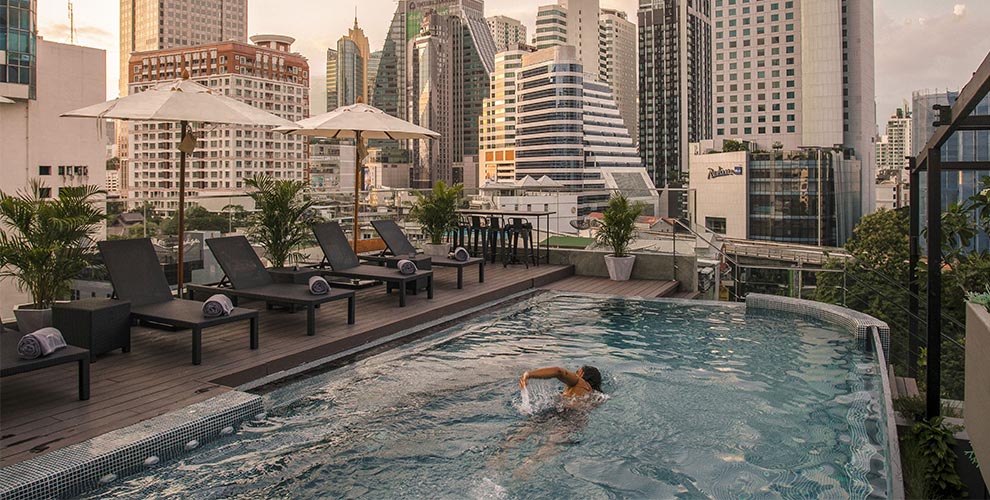 Rising from the Pratunam area at a dizzying 309 metres, this is currently the tallest building in Thailand. Fulfil any astronaut fantasies as you enter the rarefied atmosphere on the 84th floor. Once through the Disneyesque themed corridor, you’ll reach the noisy, revolving rooftop observation deck. If the cool breeze gets too bracing, descend to the 77th floor with its huge skywalk area and floor-to-ceiling windows. Either way, you’re so high up that you’ll see beyond the Chao Phraya River and Bangkok’s familiar landmarks.

Camera at the ready… and join the smartly dressed in-crowd at this award-winning bar. Located 63 floors up in Lebua State Tower, it comes complete with gold-domed roof and sweeping Hollywood-style staircase. The far-reaching vistas over the city are always a popular draw (and a photographer’s dream). So expect it to be quite buzzy and busy most evenings.

Sit among tree sculptures and abstract art in what is South East Asia’s first ever Peruvian Japanese restaurant and bar. The Above Eleven in buzzing Sukhumvit is on the 33rd floor, while only moments away from 137 Pillars Suites & Residences and Akyra Thonglor Bangkok. Sit on one of the tables next to the glass barrier for a stomach-churning, snap-worthy view of the skyline and the streets below. 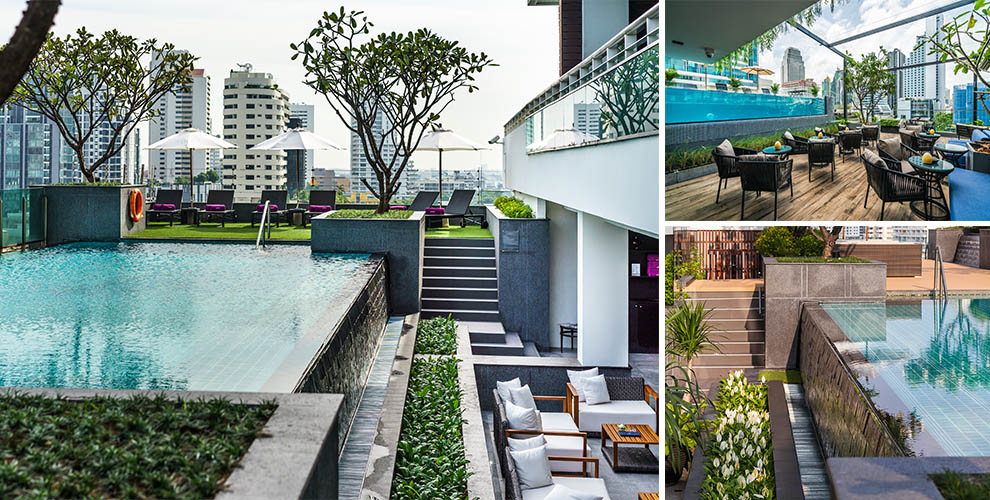 While most rooftop bars are part of hotels, Zense is found in CentralWorld – a huge shopping complex. Located on the 17th floor at a mid-sky level, there’s plenty of lounging space and a choice of five global cuisines. Book your spot, either inside on comfy beanbags or alfresco on cushioned chairs under tents. The clean minimalist design and romantic atmosphere creates the perfect backdrop to stunning views over central Bangkok and the horseracing track.

There’s only one proper hill in Bangkok, and even that was man-made during King Rama I’s 18th century reign. At its crown sits the Golden Mount or Phu Khao Thong’ at Wat Saket. The base is covered in overgrown vines – hinting at the city’s grim past when it was a crematorium for thousands of plague victims. Try and get here before the midday sun for an easy climb up 300 stone steps. These snake their way round to the gold 58-metre chedi that houses a famous Buddha relic and beautiful gory murals depicting Hell. Near the top, you’re greeted by a wall of bells and views of nearby temples.

For the more exclusive sky bars and restaurants, check if there’s a dress code. Ladies can usually wear what they like. But gentlemen should leave their shorts, flip-flops, trainers, torn jeans and sleeveless tops back at the hotel. If you’re heading to the Golden Mount in November, there’s a festival that begins with a candlelight procession up to the Golden Mount that’s been wrapped in bright red cloth.