From golden beaches and cities to mountain wilderness

Dramatic landscapes that are the stuff of cinematic legend. Cosmopolitan cities with vibrant café cultures. Golden beaches and rolling vineyards. The closer you look at New Zealand, the more there is to discover.

It would take months to see everything this diverse country has to offer. But if you only have a week or two, you might find yourself trying to choose between the two islands. As each one has their own unique draws, it can help to think about what you want from your trip before making your mind up.

Beaches
With a warmer climate than the south, North Island is the place to hit the beach. Auckland is surrounded by beautiful stretches of coastline, including Piha Beach, whose powerful waves make it popular with surfers. Further south around Hawke’s Bay, you’ll find sandy beaches such as Waimarama, and sleepy Victorian seaside towns.

Cities
Auckland is the gateway to New Zealand for most international visitors. And it’s worth staying a night or two – not just to recover from jet lag, but to experience one of the country’s most energetic cities. New galleries and restaurants are springing up around the docks, and there’s also plenty of natural wonders to take in – from the volcanic cones to the islands of the Hauraki Gulf.

Further south on North Island’s southern tip, is Wellington. This pocket-sized city has big ambitions when it comes to coffee. The flat whites at Caffeination hold their own against the best of Melbourne.

Volcanoes and hot springs
North Island, and the countryside around Rotorua in particular, is a hotbed of geothermal activity. Don’t miss a visit to the Champagne Pools – bubbling mud pools as colourful as a painter’s palette. You can’t soak in these ones, but there’s plenty more to choose from. Head down towards Lake Taupo, stopping off at Waikite Thermal Pools to bathe in hot spring water.

Country house getaways
North Island’s rolling green pastures made it a popular spot with Victorian settlers. Many set up vineyards – particularly in the warm and dry Hawke’s Bay region. Although much of this area was rebuilt in the 1930s following an earthquake, a handful of 19th century wine estates still exist, such as Greenhill Lodge.

SOUTH ISLAND: A WALK ON THE WILD SIDE 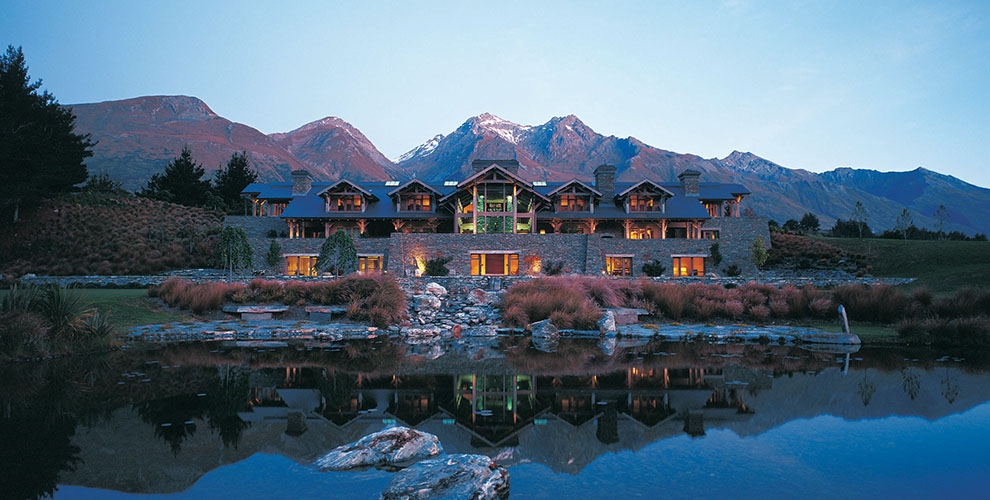 The great outdoors
The beaches, coves and forest islets of Queen Charlotte Sounds. The awe-inspiring Southern Alps. The deep river valleys of Fjordland. South Island is New Zealand at its most epic. Home to only 25% of the population, this is somewhere to get outdoors and relish being away from it all.

Even out in the wilderness, you still find some of the best luxury hotels in New Zealand. At Blanket Bay, you’ll have the Humboldt Mountains behind you, Lake Wakatipu in front, and a canopy of stars above.

Pure adrenalin
Backed by the Southern Alps, with their snow-fields and glaciers, it’s no surprise that Queenstown is known as the adventure capital of the world. Whether it’s bungee jumping, white-water rafting, hiking or heli-skiing you’re interested in, you’ll find it all here.

Wildlife watching
Cameras at the ready. Base yourself in Christchurch and spend days sailing out to watch whales and dolphins. Or head up to the Marlborough Sounds to explore the Abel Tasman Coast Track. This national park is home to colonies of New Zealand fur seals and the world’s smallest penguins.

Waterfronts and wineries
South Island isn’t all sheer glaciers and snow-capped peaks. The northern coast is known for its sheltered coves and sandy bays – ideal for exploring by yacht or kayak. Further west towards Nelson, you’ll also find plenty of vineyards. If adventure is still calling, Mouteka Marina is close by, with plenty of opportunities to sail, fish and dive.

Transforming towns and cities
The centre of Christchurch was devastated by earthquakes in 2011, which destroyed many of its 19th century buildings including the gothic-revival cathedral. Rather than simply rebuilding what was there, the city is transforming itself with creative new structures and plenty of outdoor art. Watch it blossom from The George, a boutique hotel overlooking Hagley Park.

Air New Zealand offers a variety of ways to get to New Zealand. UK travelers can reach New Zealand with only one stopover via eight gateways in Asia, the US and Canada. Star Alliance partners fly to Singapore, Tokyo, Shanghai, Hong Kong, San Francisco, Los Angeles, Houston and Vancouver. The journey continues from there on board Air New Zealand to New Zealand.