Crete: from the wild west to idyllic east

Crete is at once a paradise and a paradox. It is one of Greece’s most popular tourist destinations, but one of the least spoilt. From its rocky ravines and rugged, cove speckled coastline, to impossibly blue lagoons, fragrant olive groves, and colourful cities steeped in history, Crete has something to capture the imaginations of every type of traveller. To really get to know both sides of this large island, it’s best to have two bases – one east of the capital Heraklion, the other on the west coast. That way, you can cover a lot of ground, while staying in some of the island’s best boutique hotels. 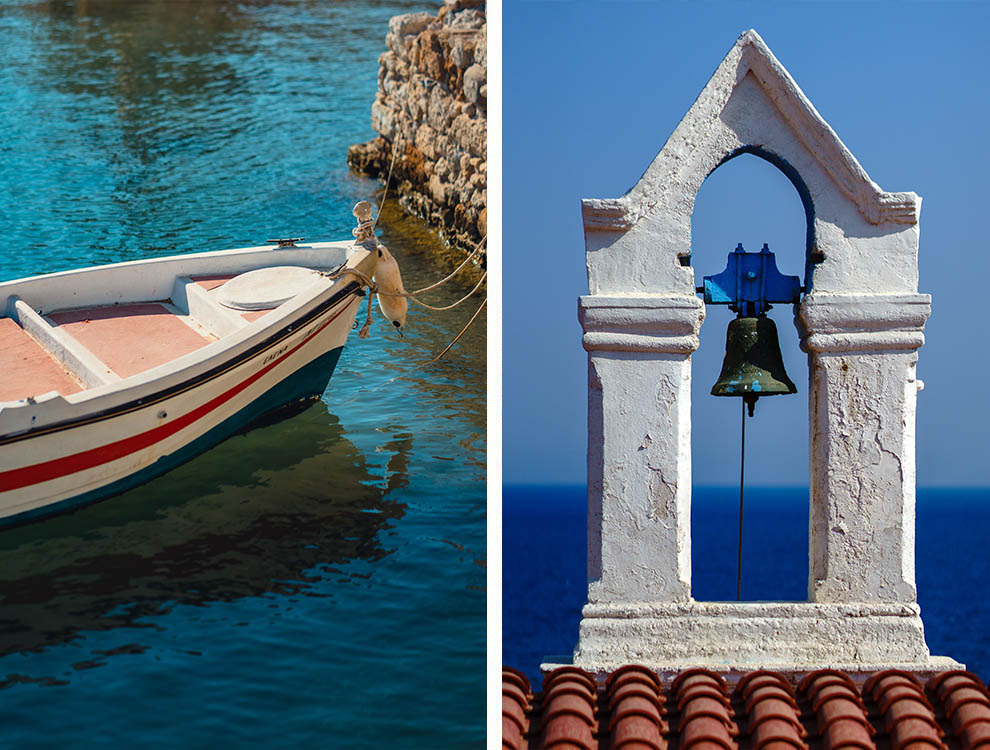 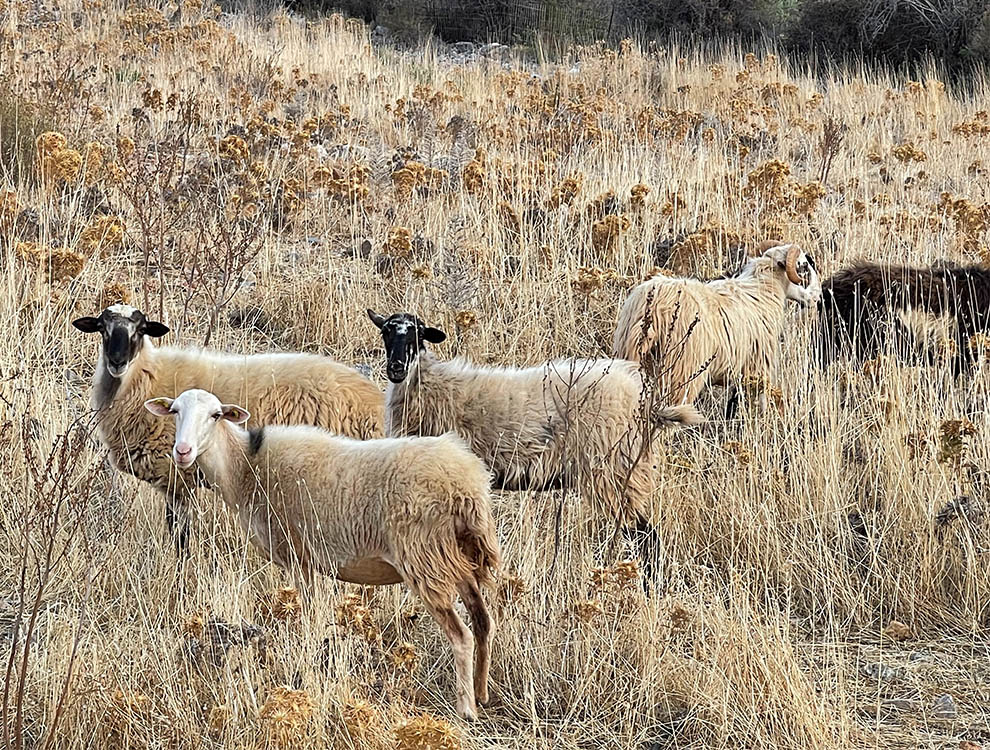 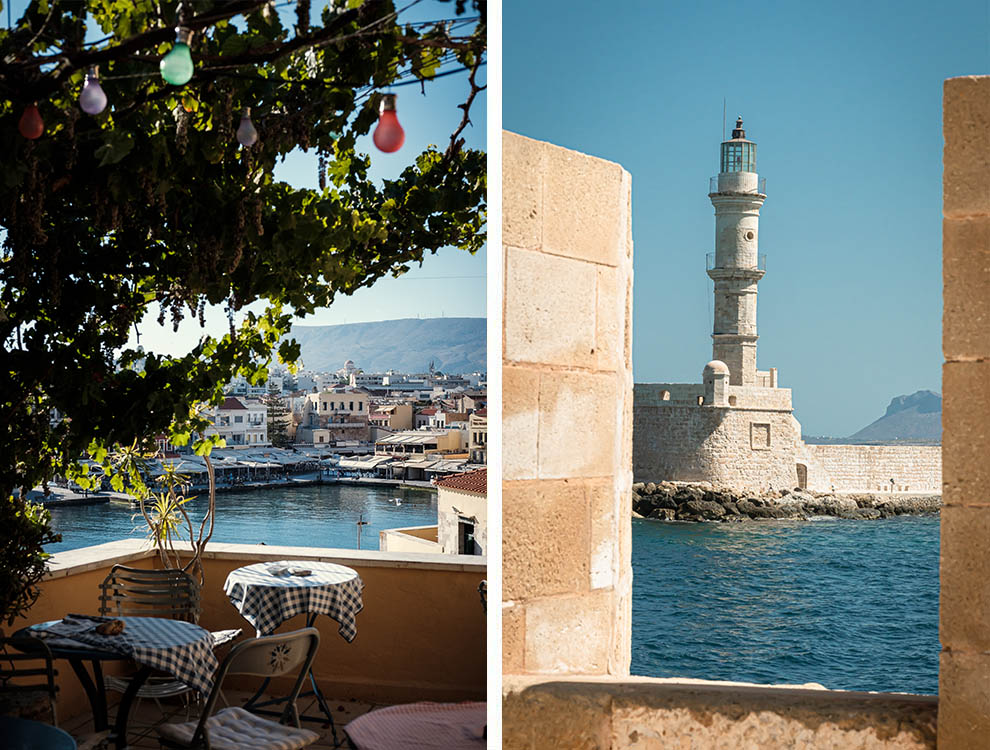 With its picture-perfect harbour buzzing with traditional tavernas serving just-caught seafood, the seaside city of Chania makes the perfect starting point on any Cretan adventure. Get lost in the maze of narrow streets which wind their way around the Old Town, lined with small shops selling leather goods and ceramics, before making your way to the Municipal Market of Chania to sample the island’s rich bounty of produce – think local cheeses, olives, thyme honey, and ice-cold raki. You can’t miss the lighthouse, which stands watch over the city on its original Venetian base, and was most recently restored by the Egyptians at the end of the 19th century. Home to flourishing folk traditions, the artisan spirit is alive and well in Chania, where you can learn to weave, embroider, and cast metal alongside locals, and admire the art of Cretan boot-making on Skridlof Street. 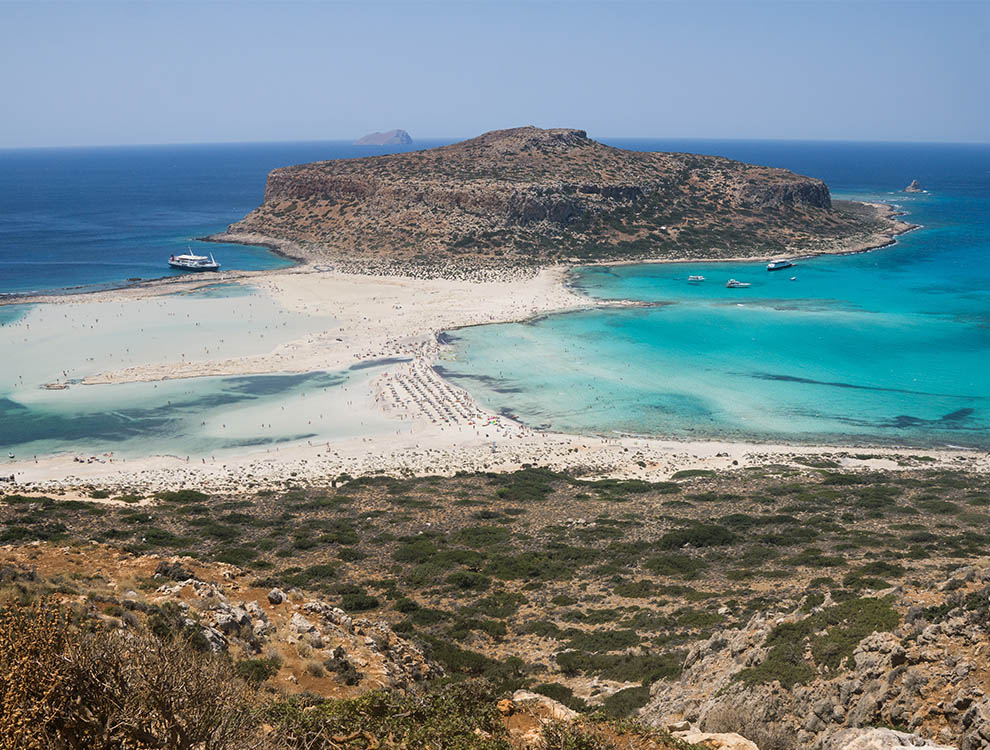 While most of the sights worth seeing are clustered around Chania’s waterfront, an hour’s drive outside the city centre will bring you to the wildly beautiful Balos, the island’s pin-up beach which you’ll most likely recognise from postcards and travel posters. Brave the rocky dirt-road drive down to the lagoon and you’ll be rewarded with Indian Ocean-rivalling waters and a real sense of remoteness – just be sure to pack a picnic, as there are no restaurants or cafés here. 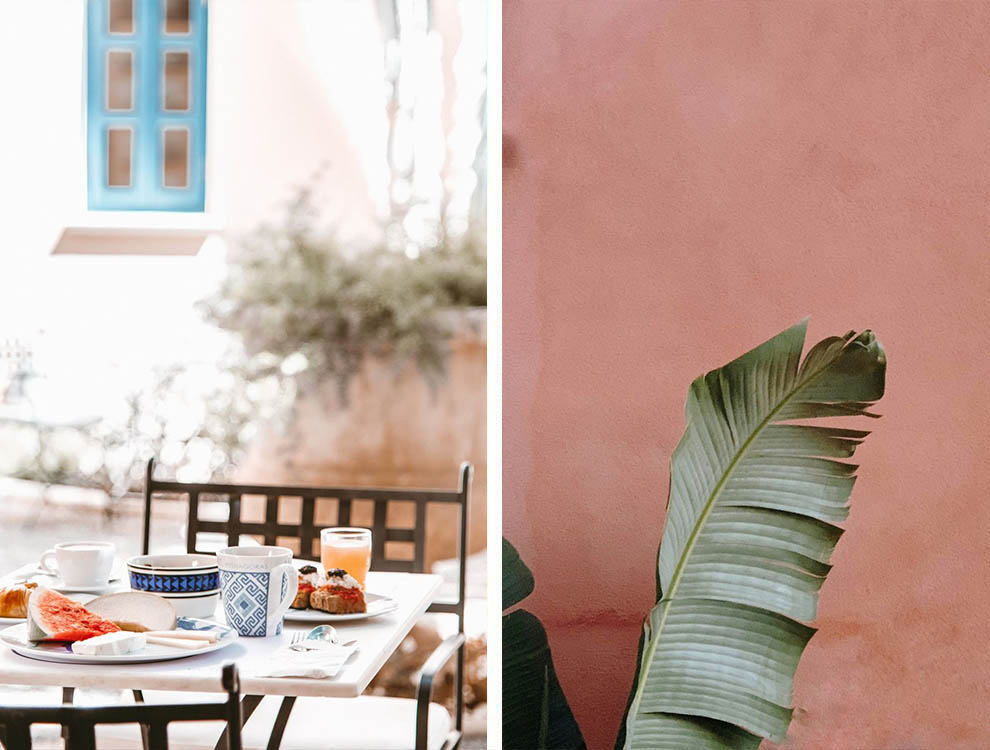 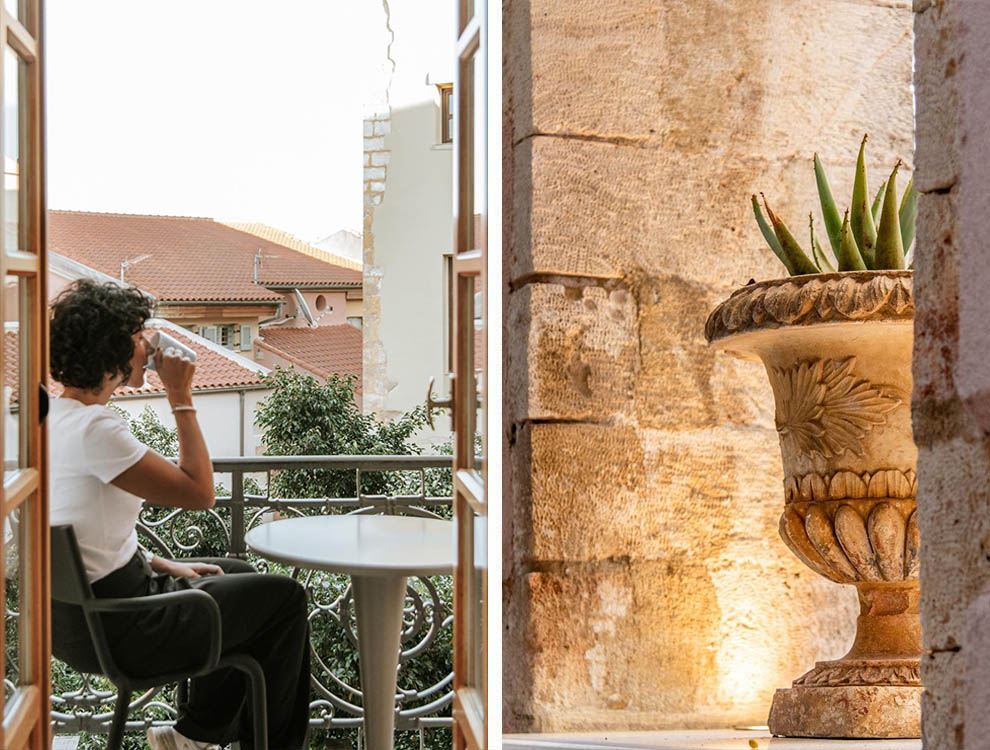 With its enviable Old Town location and far-reaching ocean views, Casa Delfino Hotel & Spa brings together the very best of Crete. This beautifully restored, family-run, 17th century Venetian mansion houses a set of stylish suites wrapped in original stone walls and decorated with handpicked antiques. Once you’ve explored the pastel-coloured Old Town on your doorstep, return to the hotel’s roof garden to sunbathe and sip signature cocktails as you watch the sun set over the twinkling harbour. Suggested stay 2 nights. 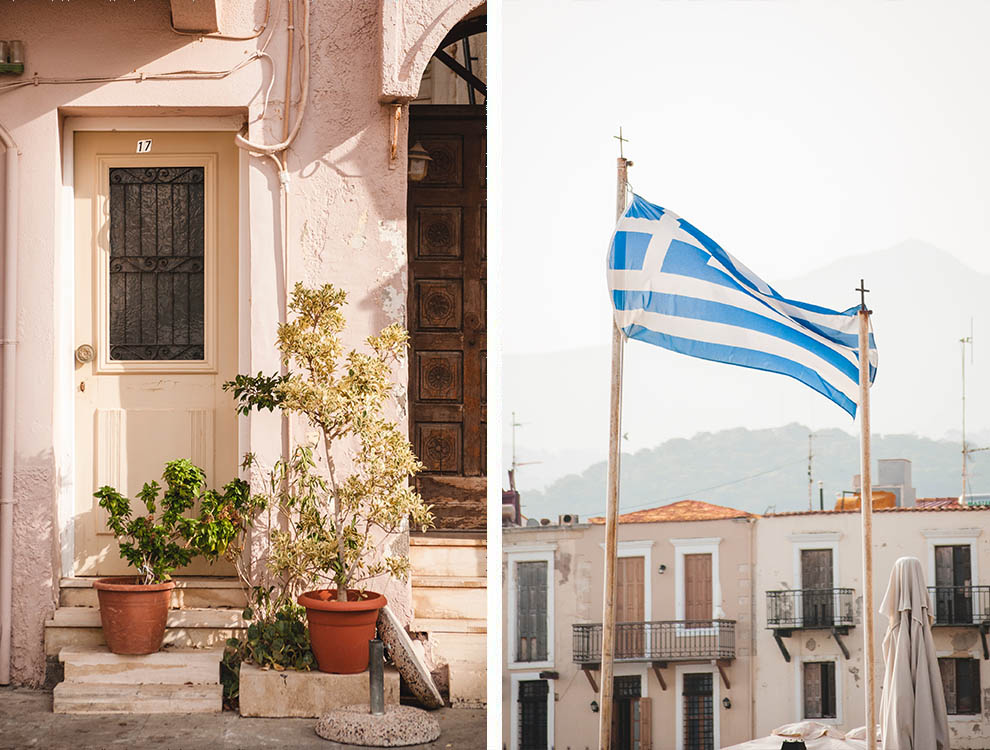 Any trip to the west of Crete should include Rethymno, which is just an hour’s drive from Chania along a scenic stretch of coast. This energetic city is ideal for wandering on foot with lots of inviting bars, cafés and shops, plus a must-visit Venetian fortress. Built in the 16th century, it was once an important citadel, designed to accommodate the city inhabitants. Although it was too small to house the entire city, today it’s home to a friendly population of local cats, as well as visiting day-trippers. Venetian influences aside, the minarets and domed mosques serve as a photogenic reminder of the former Turkish presence – you’ll find Neratze mosque, considered the city’s main minaret, on Venardou street. Next door to the Historical and Folklore Museum, a local baker is more than happy to show visitors how to make traditional phyllo pastry leaves, while Souliou Street is the perfect place to pick up some handmade jewellery and pottery. For soul-stirring views over Rethymno and its surroundings, head uphill following signs to Agia Irini.

SETTLE IN FOR THE NIGHT… 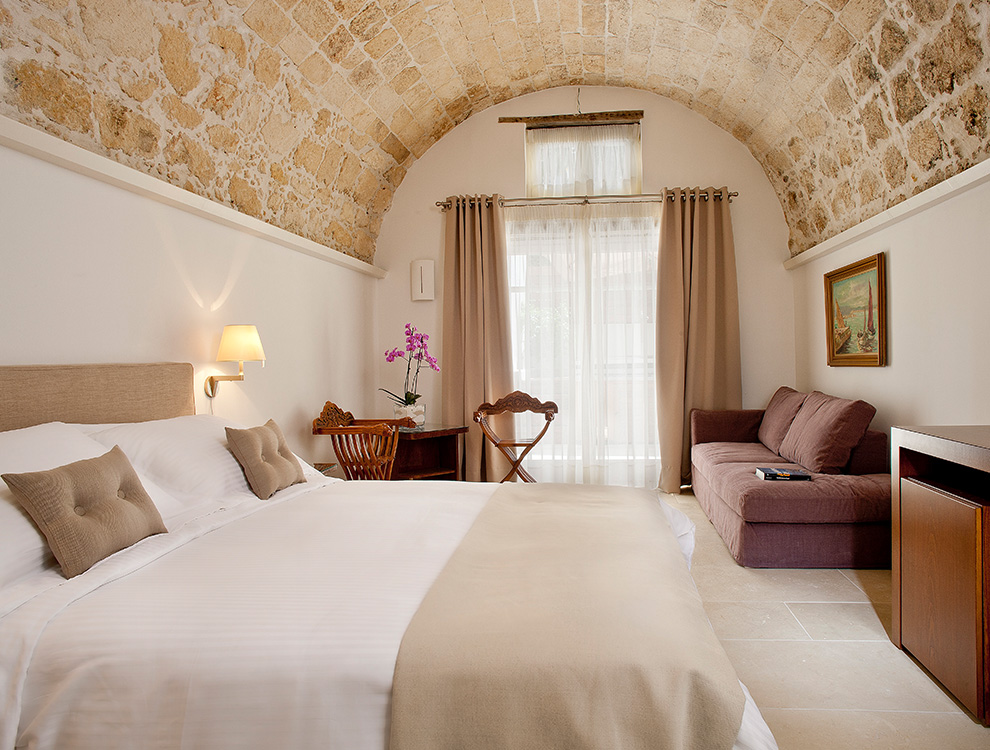 Set amidst the Renaissance Venetian architecture of Rethymno Old Town, Rimondi Boutique Hotel comprises Rimondi Estate and Palazzo Rimondi, two separate historic properties within close proximity to one another which are both all about laid-back luxury. Rimondi Estate offers a selection of suites including a spa suite and a large pool and jacuzzi in a tropical garden, while Palazzo Rimondi surrounds an enchanting cobblestone courtyard with a circular pool, outdoor jacuzzi and bar. Suggested stay 1 night minimum. 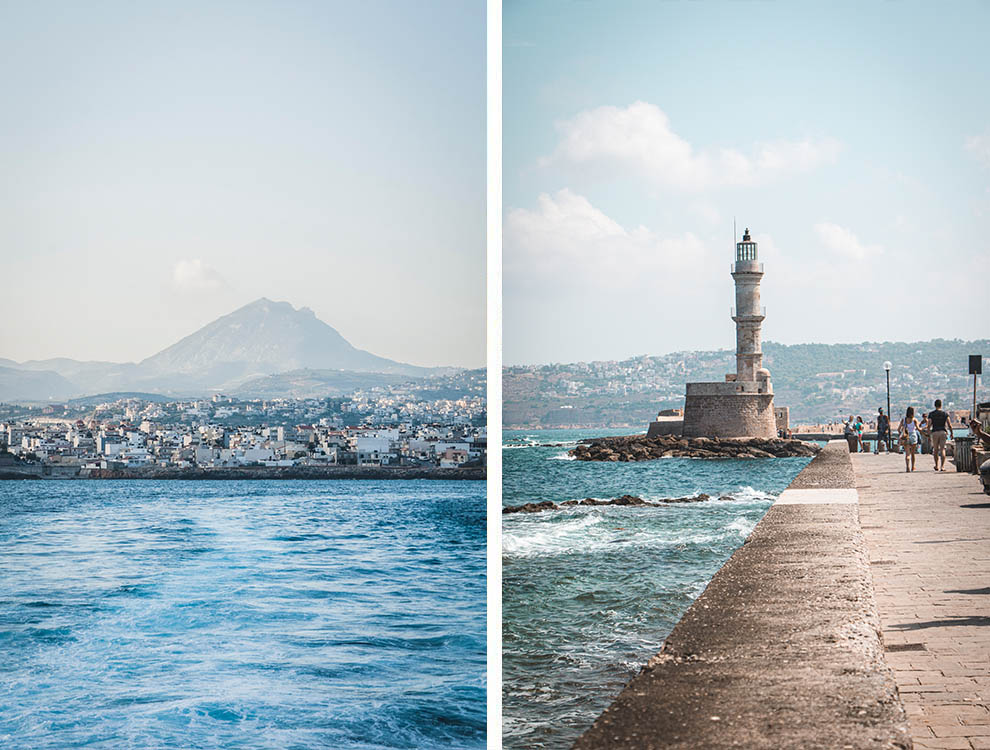 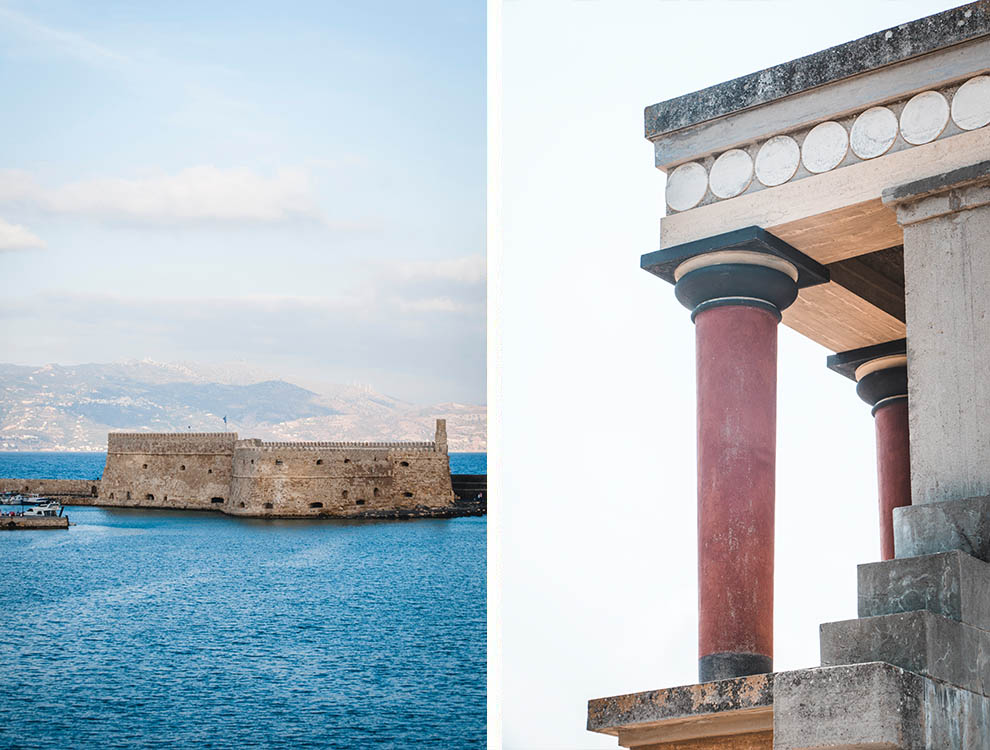 The historic city of Heraklion is an ideal midway point between Rethymno and the final stop on your Crete itinerary – Agios Nikolaos. If you are short on time, make a beeline for the Palace of Knossos, the most important archaeological site on the island, and the oldest palace in Europe – said to be the setting for the mythical Minotaur roaming the labyrinth here. Excavated and restored by a team led by British archaeologist Arthur Evans, the site is also home to the Archaeological Museum of Heraklion, where history lovers can admire an array of Minoan art and artefacts, from faded frescoes to life-like figurines. For panoramic views of the mountain-backed Cretan capital, make time to visit the small, hilltop town of Rogdia, or the near deserted village of Ahlada.

LAST BUT NOT LEAST: AGIOS NIKOLAOS 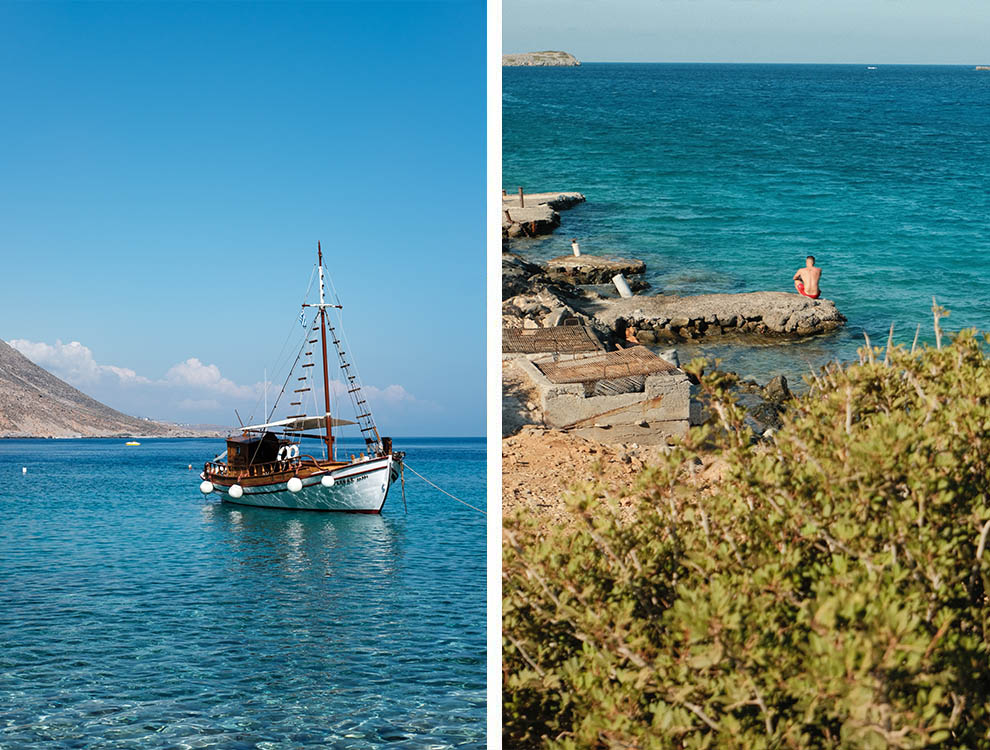 Once a sleepy fishing village, Agios Nikolaos has become a popular coastal destination for those in the know, while retaining its small town feel. With three waterfronts – the lake (known as “Voulismeni” to locals), Kitroplatia beach, and the marina – everything here centres around the sea. Legend has it that this is where the ancient Greek goddesses Athena and Artemis would come to bathe, so you know the waters are well worth a dip. Head into town in the early morning before the midday heat to browse the many small, independent shops for woven fabrics and rustic ceramics, then stroll along the waterfront to people watch as glamorous yachts bob in and out of the marina. The beach at Kitroplatia is one of the few on the island to provide a town-centre-by-the-sea location, while the tiny, pebble beach at Plaka just outside Agios Nikolaos feels a world away from everything (and everyone!) else. 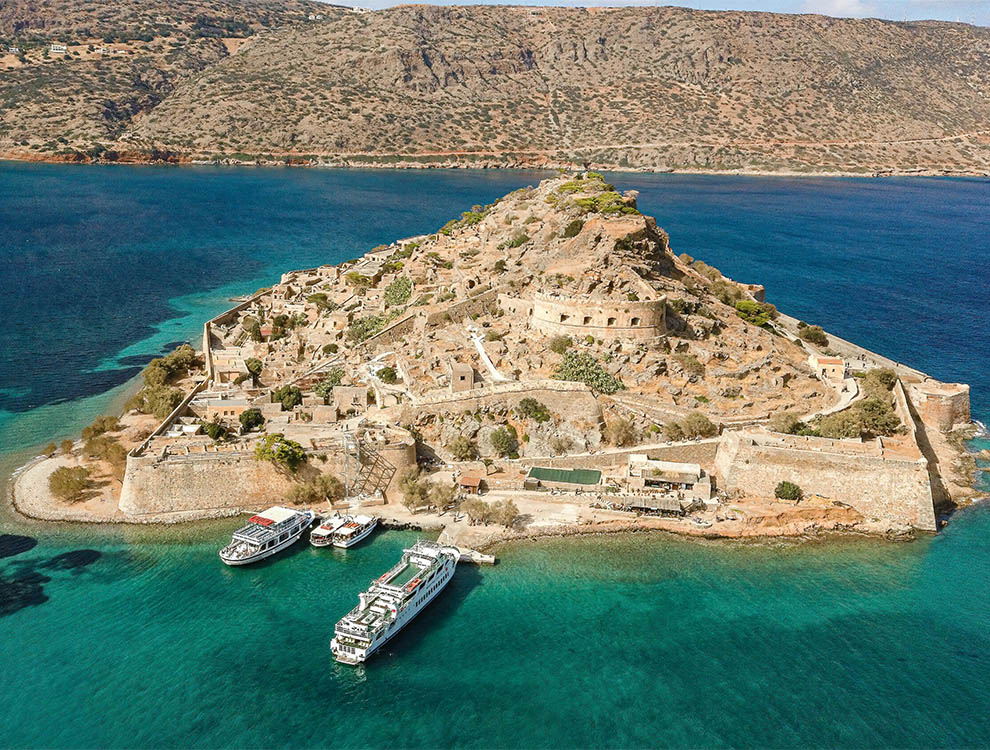 Regular boat trips run from Agios Nikolaos and Elounda to the eerily beautiful island of Spinalonga. The Venetians built a fortress here in 1579 and the island was used as a leper colony in the 20th century. The atmospheric island has inspired writers and artists for generations – and, more recently, was the setting for Victoria Hislop’s bestselling novel, The Island. Spend the day swimming in secluded coves and simply letting the beauty of Mirabello Bay wash over you. 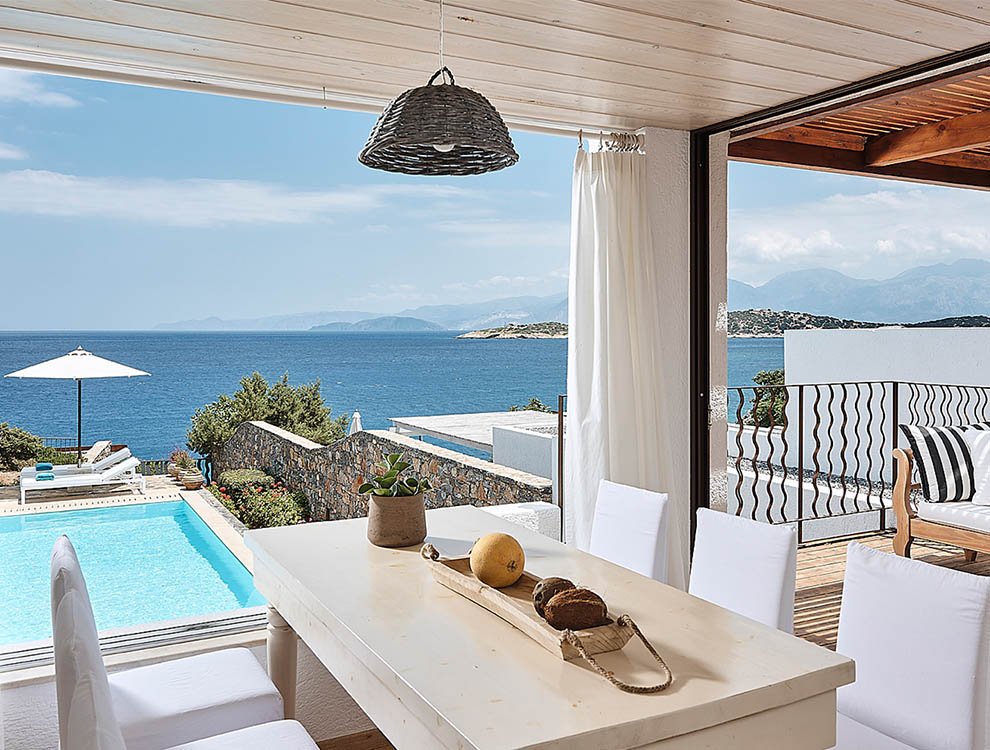 For quintessentially Cretan accommodation with stunning sea views from both suites and villas, St. Nicolas Bay Resort Hotel & Villas takes luxury island living up a notch. Recently adding eight Thalassa Villas which are named after Greek gods and goddesses and set just steps away from the water’s edge, with indoor-outdoor living spaces, large private pools, and open-plan fully-fitted kitchens, the resort is the perfect choice for families and larger groups looking to swim straight from their villa to the sea. Couples in search of extra privacy should opt for Rock 1 and Rock 2 Suites, which are closest to the seafront and come with their own private plunge pools. The ELEMIS-stocked Poseidon Spa is a haven of relaxation – book the Aphrodite treatment cave for a thalassotherapy session, before sinking into a seat at Astra Bar to watch the dusky pink sunset. Suggested stay 2 nights minimum. 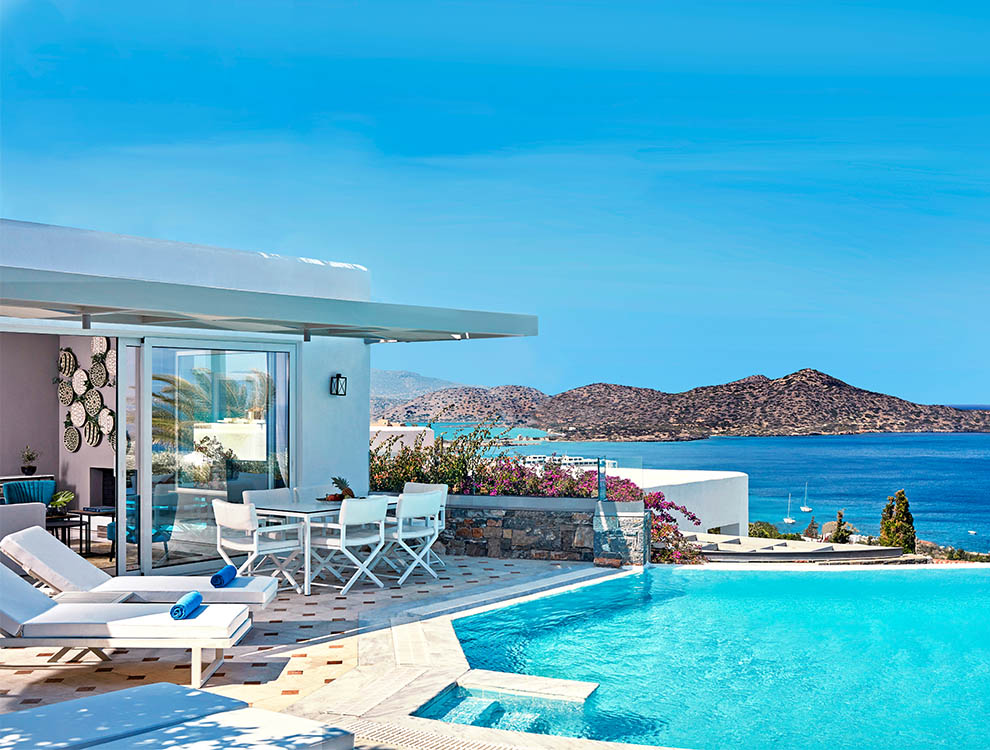 Meanwhile, Elounda Gulf Villas clings to the hillside overlooking the Aegean Sea and the Gulf of Mirabello with spectacular views towards Spinalonga Island. With just 18 private villas, each with its own private infinity pool and 15 stylish suites, this is a true haven of Cretan hospitality. Enjoy a massage in the privacy of your villa before savouring a selection of Cretan wine and a platter of cheese sourced from local farms, by the main pool. As evening approaches, reserve a table at Daphni Restaurant for gourmet Greek cuisine with a side of sea views. Suggested stay 2 nights minimum.

Seeing the most of Crete is best done driving, which makes a car the essential method of transport. If you’re in need of a rental or transport between hotels, as always, ask our Reservations Team for details. While Crete is a year-round destination, our favourite month to visit is September – the oppressive summer heat gives way to warm days and balmy nights, the sea is calmer, and the beaches less crowded.