Castaway to these lesser-known islands for a quieter European summer

Has lockdown given you a serious case of ‘islomania’ or have you always found islands indescribably irresistible? There’s no denying that Instagram favourites like Santorini and Capri are dream island pin-ups, but if you’re in search of something a little more secluded, these under-the-radar destinations offer alluring alternatives to the more popular crowd-drawers. 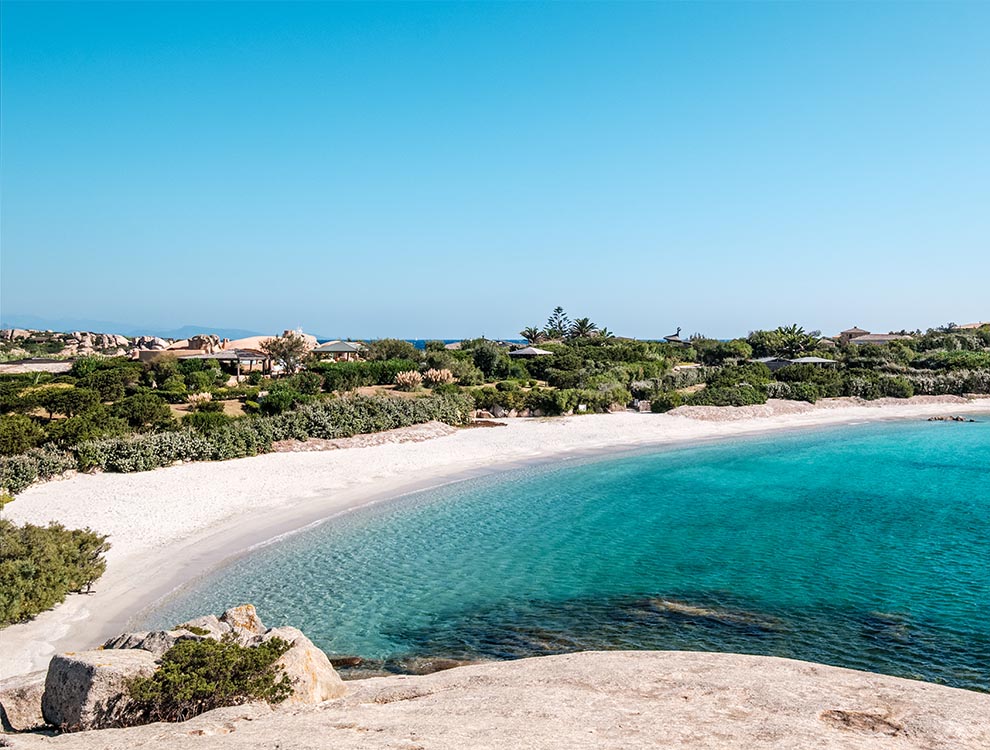 This jewel-like island came into its own in the sixties when film stars flocked to its pristine beaches scattered with Seychelles-style boulders, and has remained just as exclusive ever since. With its French soul and Italian style, Cavallo enchants all who visit its wild coast. Much of tiny Cavallo’s charm is to simply pause and soak up the tranquillity of your surroundings – with very few roads and next to no cars, you’ll only hear the sound of the waves lapping the shore as you stroll to secluded coves and deserted beaches. 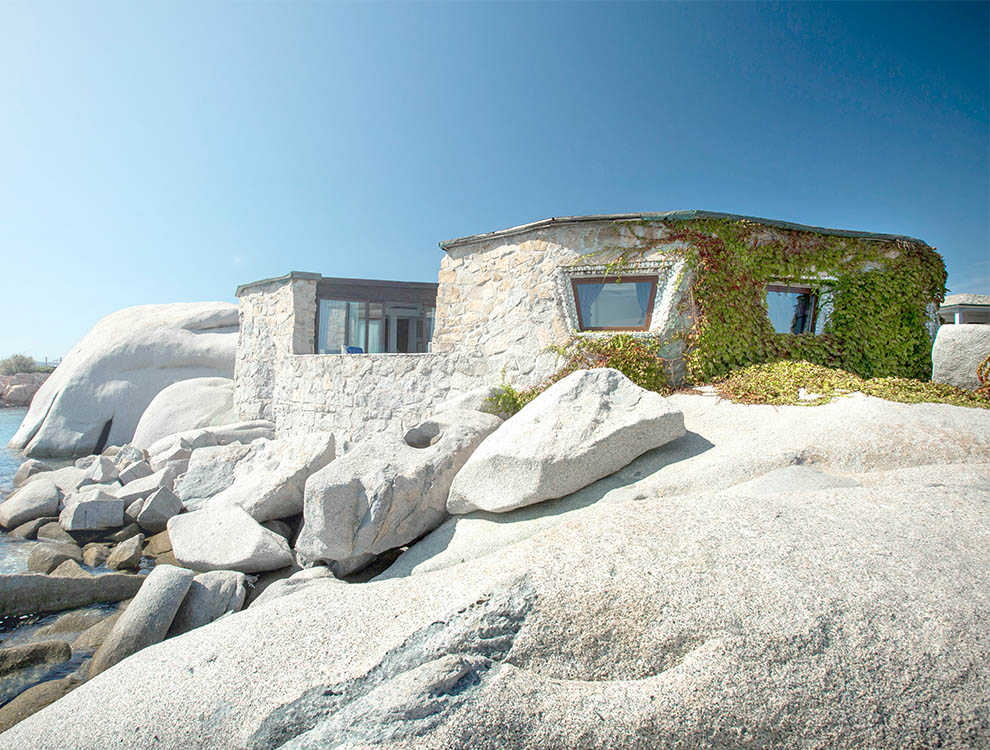 Where to stay: With a captivating setting just off the southern most tip of Corsica, Hotel and SPA des Pecheurs is a delightful hideaway sitting right on the water’s edge. Built in stone from the island, this serene sanctuary blends beautifully into its white rocky surrounds. Be sure to book one of the several rooms with a terrace or balcony from which to take in the glorious sea views. 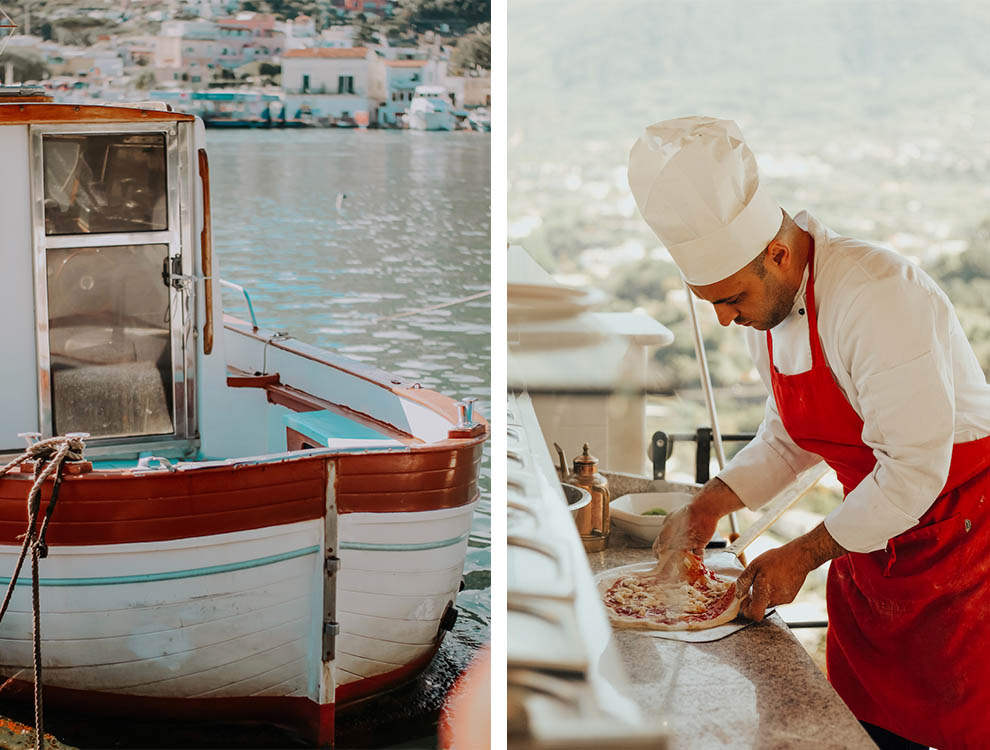 The tiny Tyrrhenian island of Ischia just off the Amalfi Coast has eclectic charm in buckets and spades, not to mention some of Italy’s best beaches. The less ostentatious neighbour to nearby Capri, the scenery on this volcanic island is a patchwork of vineyards, Roman ruins and fragrant woodland. Picture uncrowded beaches and food that blends mountain earthiness with the freshness of the sea, with natural hot springs enjoyed by the likes of Virgil and Pliny for the therapeutic powers of the thermal waters. 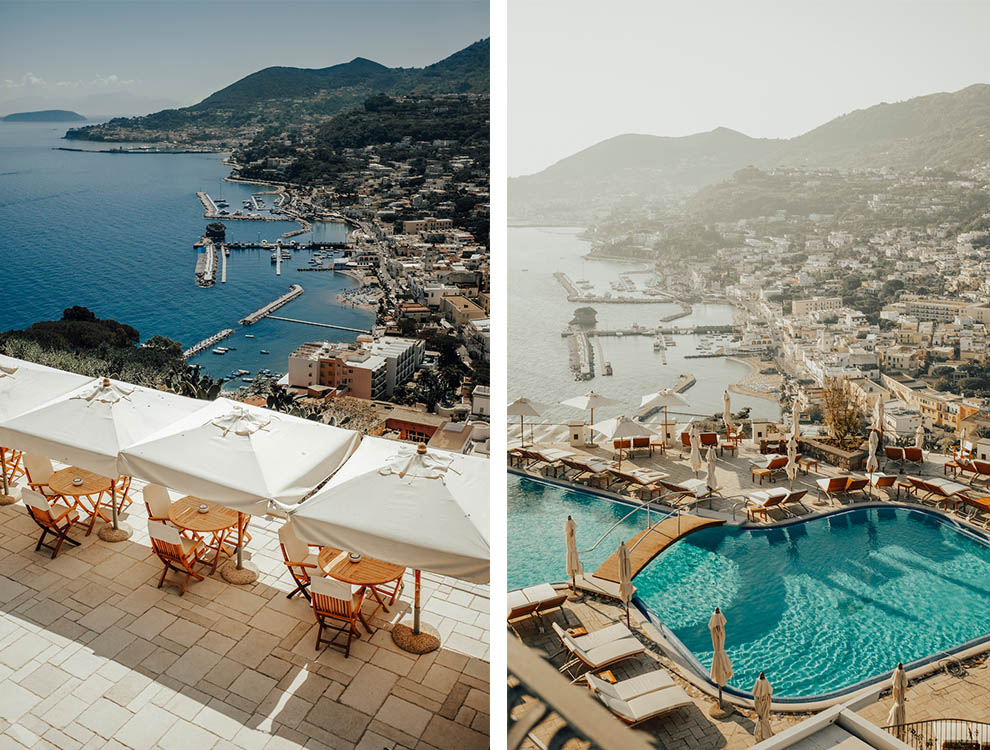 Where to stay: In a secluded part of a rugged outcrop overlooking the Neapolitan Coast, San Montano Resort & Spa has stunning Ischia and Naples views. Take them in from one of the six outdoor pools, while eating lunch alfresco, or from your very own room terrace. 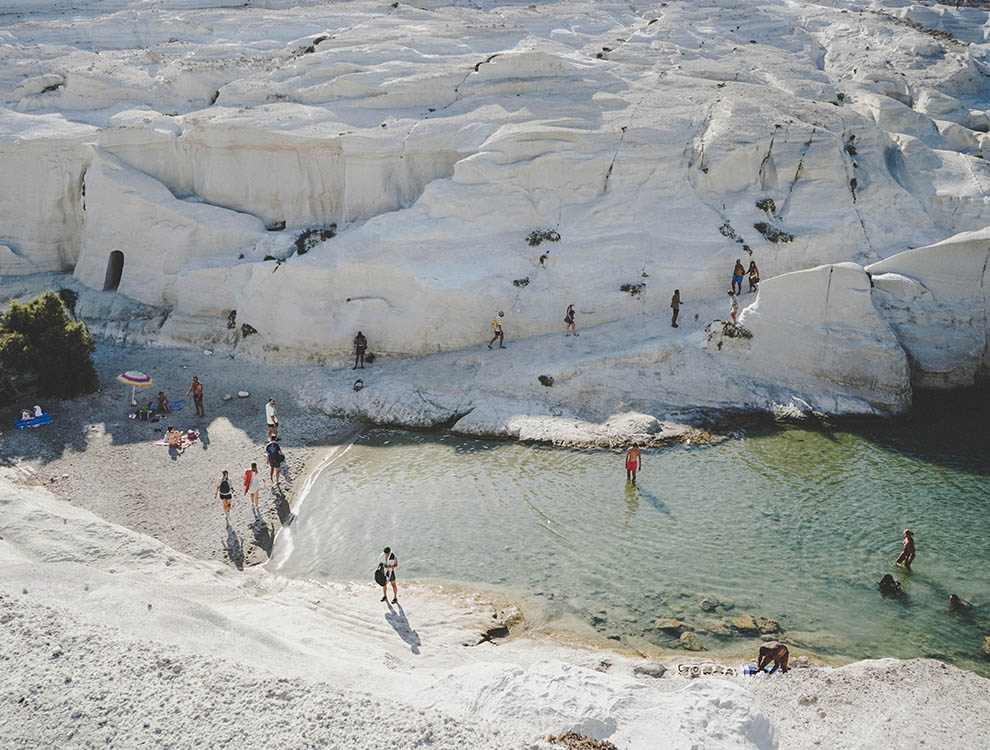 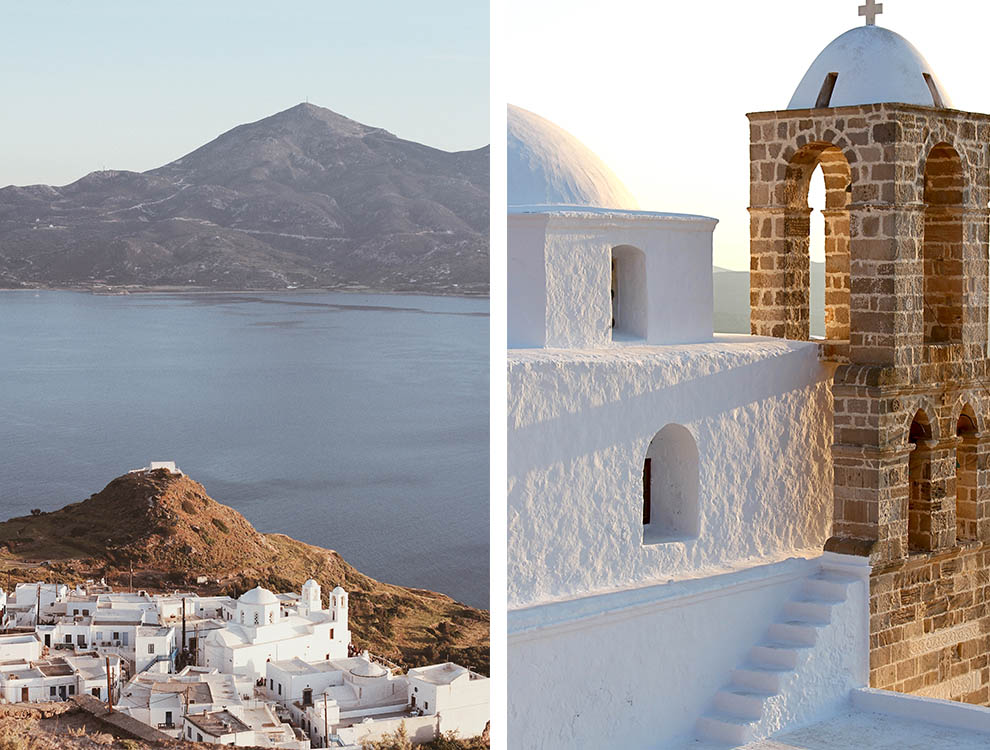 Greece’s charms are as many and varied as its islands, though the lunar-like landscape of Milos is truly something special. A quieter and less crowded alternative to Mykonos and Santorini, this Cycladic gem rivals both with its unique volcanic scenery and wraparound ocean views. Fringed by the Aegean Sea on all sides, there are over 75 breath-taking beaches to discover – ranging from stretches of golden sand to hidden coves only reachable by boat. On the northern coast, don’t miss the moon-like landscape of Sarakiniko, or the magical coves of Papafragas. 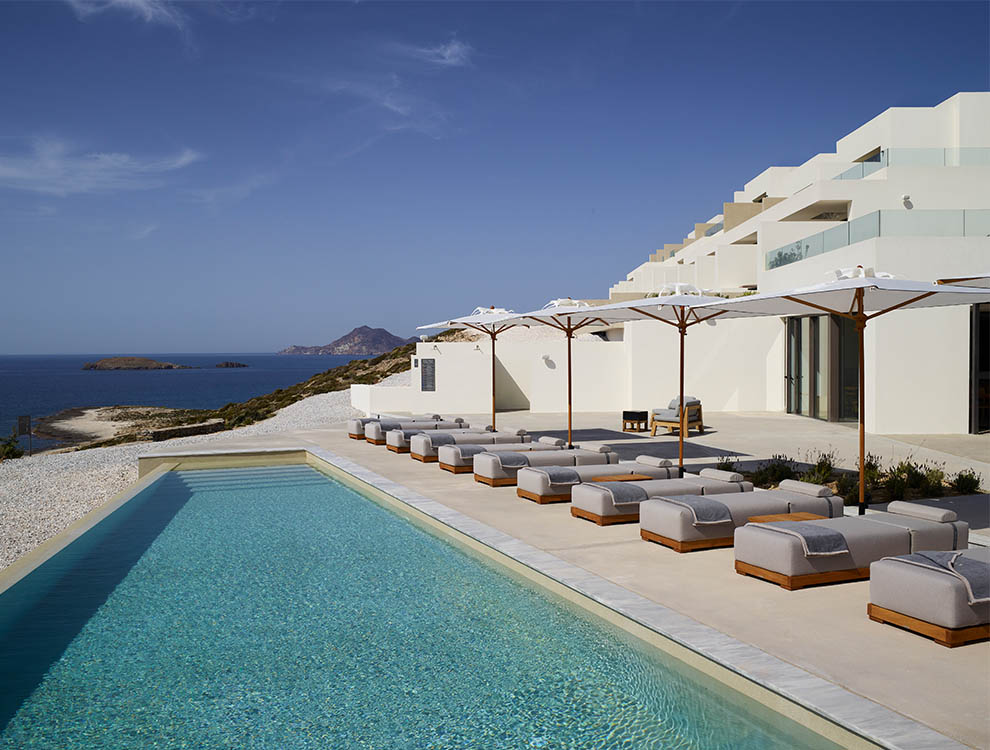 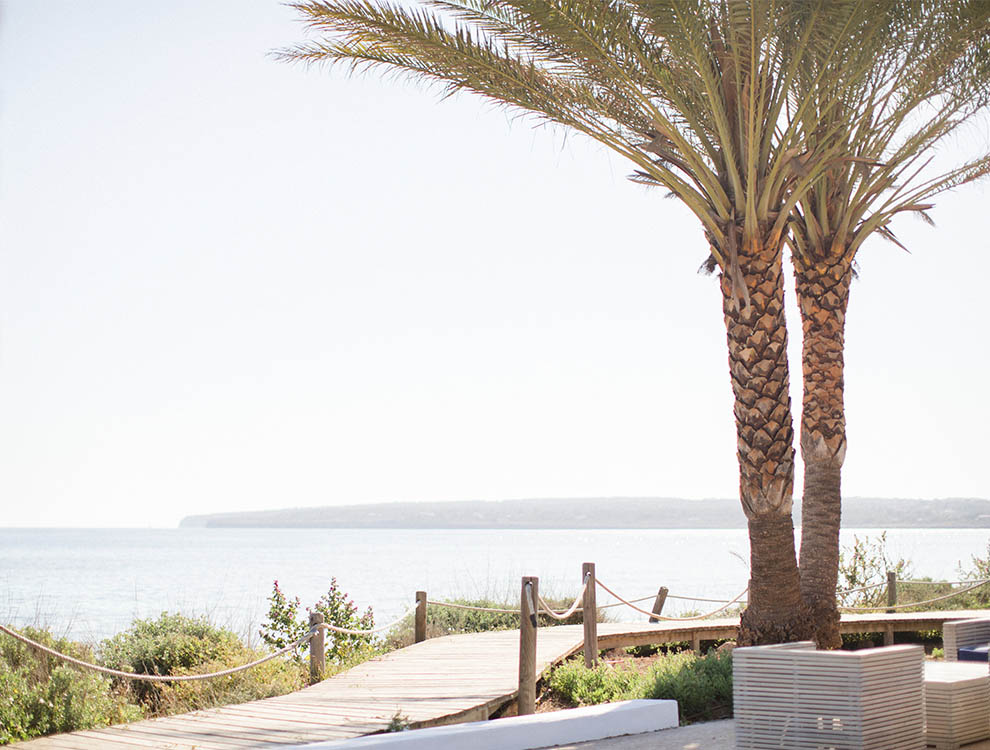 The laid-back little sister to upbeat Ibiza, Formentera is the smallest of Spain’s Balearic Islands. Wearing its eco-credentials proudly on its secluded sleeve, you won’t find high-rise buildings or clusters of hotels which gives the island a truly unspoilt feel. Much of Formentera’s lure is that there’s very little to see – leaving you free to appreciate its natural beauty. Picture icing sugar sand dunes and whitewashed villages punctuated with green pine forests and the brightest of turquoise seas you’ll see this side of the Indian Ocean, with a dash of bleached blonde beaches. Platja de Migjorn on the southern coast is true escapism territory, with little more than a handful of chiringuitos for company. 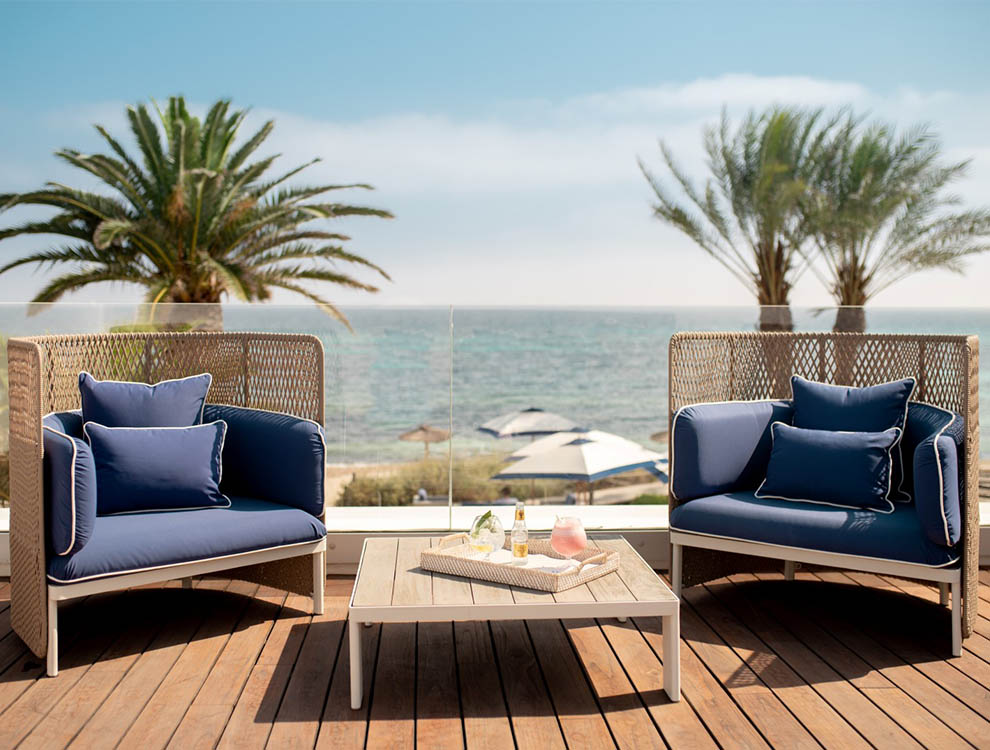 Where to stay: Go barefoot boho-chic at Gecko Hotel & Beach Club, a light-filled boutique retreat on one of the island’s best stretches of sand. Rooms overlook the blue Mediterranean or palm-filled gardens, while suites come with private plunge pools surrounded by hammocks and terraces with sink-into sofas. Little touches like beach bags and towels are all thought of, so all you have to do is decide how you’d like to relax. 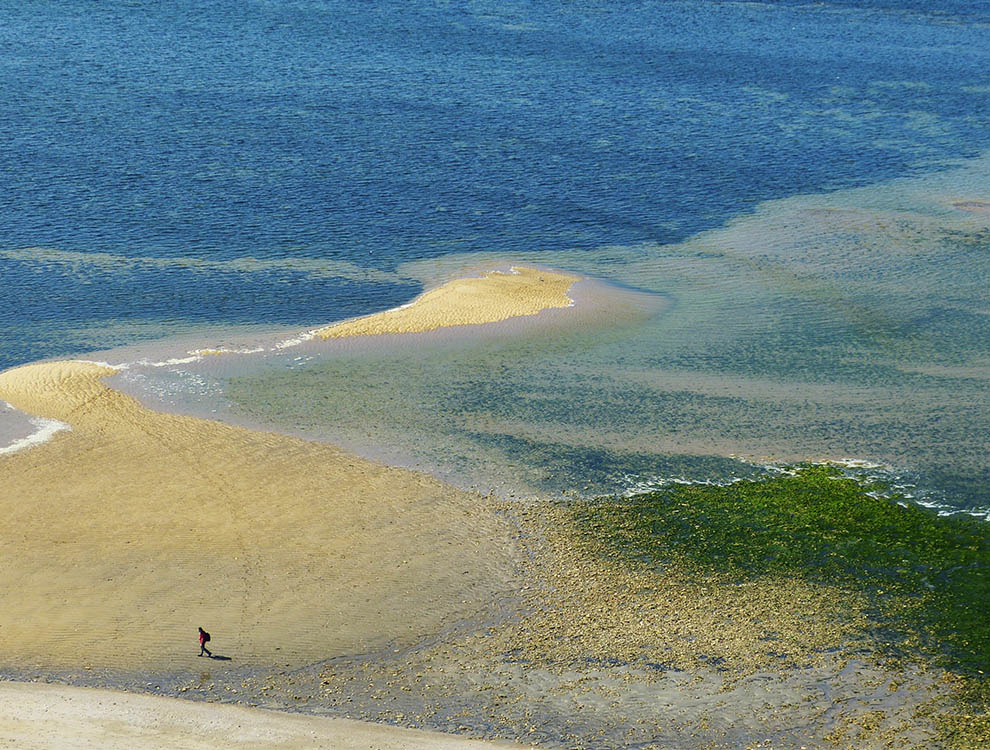 Hideaway coves, quaint streets lined with green-shuttered houses and traditional craft shops that rub shoulders with designer boutiques. It’s little wonder Île de Ré has long been a summertime playground for the Parisian in-crowd. While the secret may be out, this Atlantic coast getaway hasn’t lost its authentic charm. With cycle paths curving around sand dunes, salt pans, pine forests and oyster beds, the ‘White Island’ is an idyllic French escape. 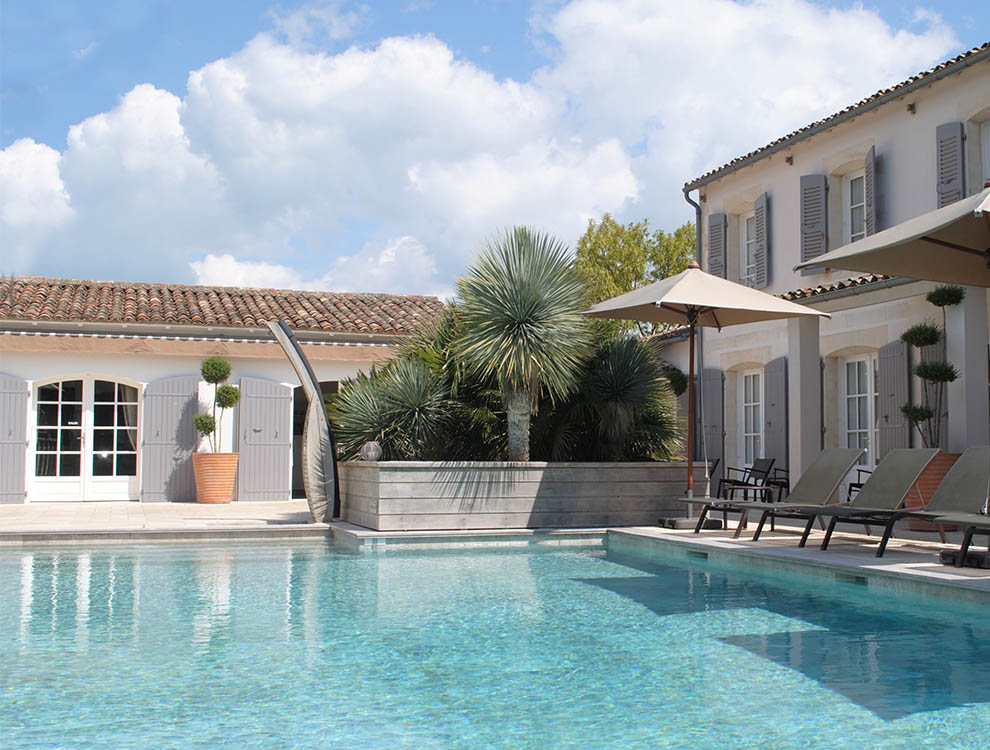 Where to stay: With its white walls, blue shutters and terracotta tiles, Le Clos Saint-Martin Hotel & Spa oozes classic Île de Ré style. At first sight it’s a quintessential 18th-century French villa, yet as you draw nearer, the quirky sculptures dotted across the manicured gardens hint at a contemporary haven within. 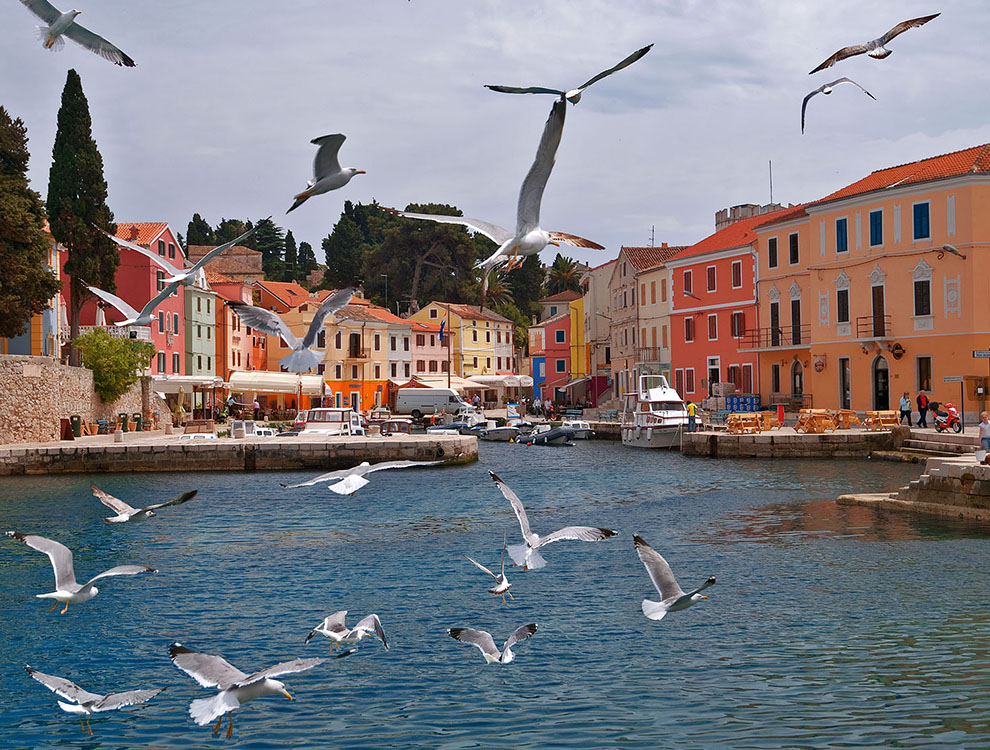 Hidden coves, lush woodland and clear turquoise waters – Lošinj has all the elements of a desert island hideaway. Take in the sea air – said to have restorative effects – as you trace the coast on a walking trail, looking out for dolphins as you go. Or set out to uncover the island’s peaceful beaches and claim your own curve of sand. Wander past the hotchpotch of colourful houses and bobbing boats along Mali’s picturesque harbour, seeking out a spot for supper to watch the sun set over the Adriatic Sea. 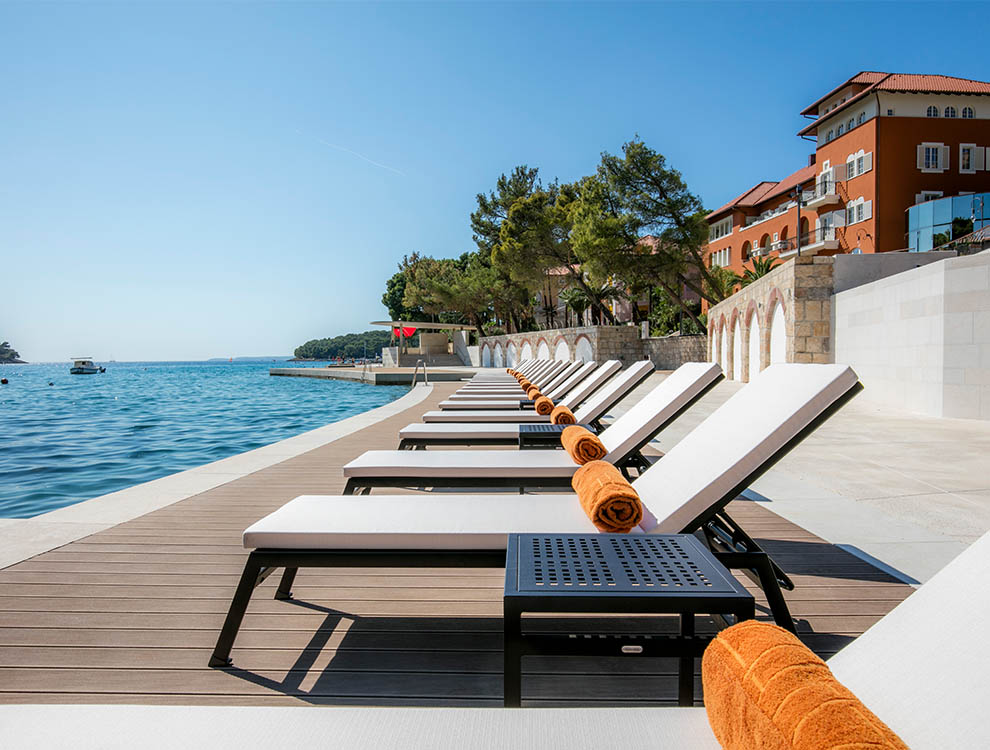 Where to stay: Set between the Čikat forest and the shimmering sea, Boutique Hotel Alhambra takes up prime position on Lošinj Island. A memorable gastronomic experience awaits in the restaurant where each course is accompanied by sommelier-selected wines from an extensive cellar. And just a few steps down from the promenade leads you to the hotel’s private beach, with stylish sun loungers and parasols. 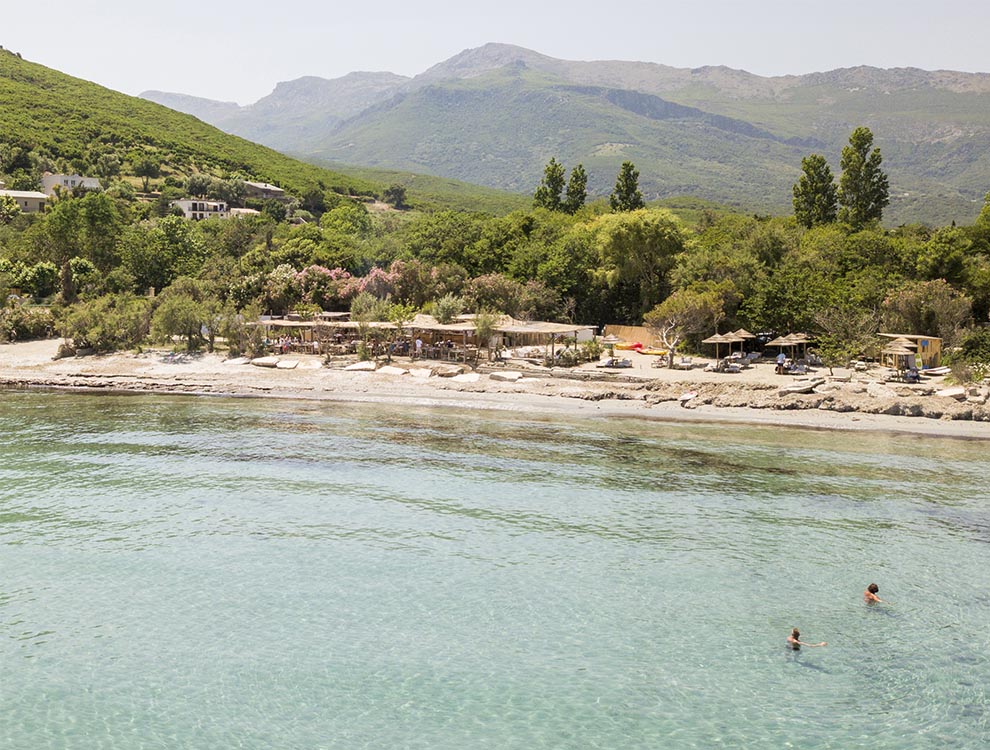 Though Corsica is far from secret, the Mediterranean’s fourth-biggest island still carries a dash of castaway charm where a quiet cove is never far away. There are canyons, cliffs and caves aplenty in Corsica. Charter a yacht to see the island from the Mediterranean Sea, or climb high for cliff-top views of coastal villages. Rent kayaks to paddle to hidden grottos, then relax on one of the island’s 200 white sandy beaches and gaze out at sailboats dotting turquoise harbours. 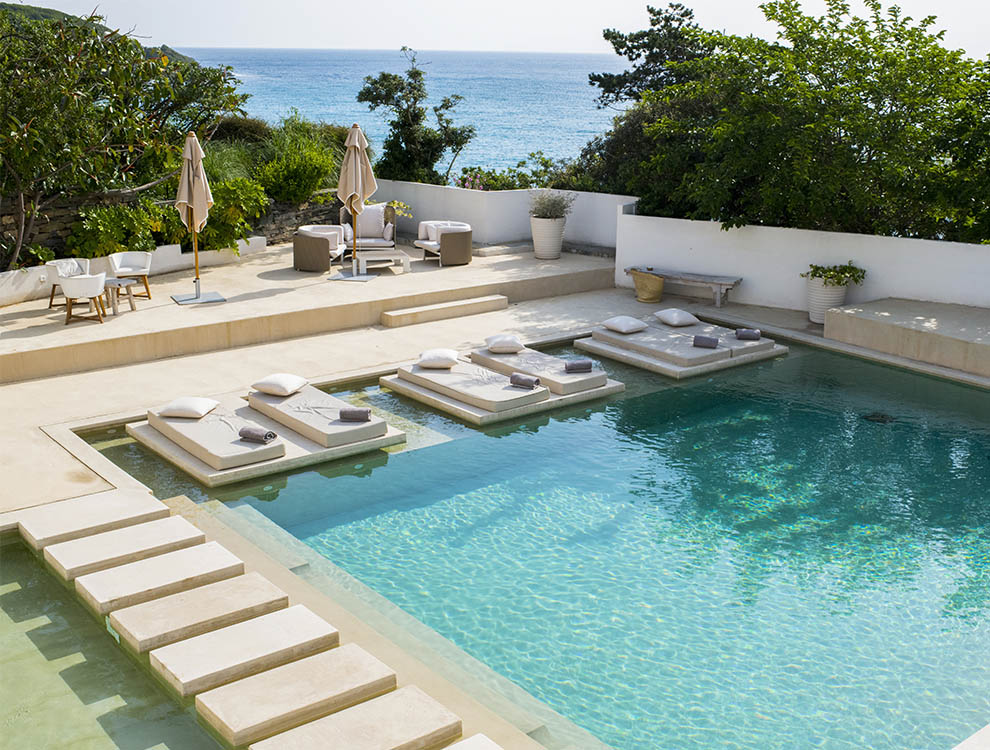 Your only difficulty at Domaine Misincu will be deciding whether to book a suite, pool or beach villa.

Where to stay: At the ‘wild’ tip of the island, Cap Corse, Domaine Misincu is an eco-luxury escape with its own river running through it – where outdoor yoga and Pilates take place on the banks. Meanwhile, the villa-styled Miramar Boutique Hôtel overlooks the Gulf of Valinco, where all the rooms and suites have private balconies or terraces with sparkling sea views. And for tucked-away luxury amidst the beautiful baroque streets of Bastia, Hotel Des Gouverneurs comes with terraces that hover above the Old Port and seascape beyond.