Inside an azulejos atelier: piecing together the past of Portugal’s iconic tiles

It is almost impossible to picture Portugal without imagining the colourfully-glazed, ceramic tiles which have decorated façades across the country since the 13th century. Azulejos tell a visual story of Portugal’s history and culture, an ancient artform which artisans Carlos Filipe and Georgina Carvalho are keeping alive in their authentic atelier, Azulejos S. Simão Arte, in the charming village of Vila Fresca de Azeitão.

Offering one-hour workshop sessions to visitors and guests of Hotel Casa Palmela, a vineyard-encircled country house in the verdant setting of the Arrábida Natural Park, Carlos and Georgina share their tile-making expertise throughout their step-by-step ceramics classes, which begin with moulding your own clay by hand. Using traditional tools and generations-old techniques, the make-from-scratch experience is accompanied by local storytelling which unearths some of the tales behind the tiles. After spending the night in a high temperature oven, the finished hand-painted tiles are delivered to guests the following day (or posted to your address of choice if you don’t have room in your suitcase). 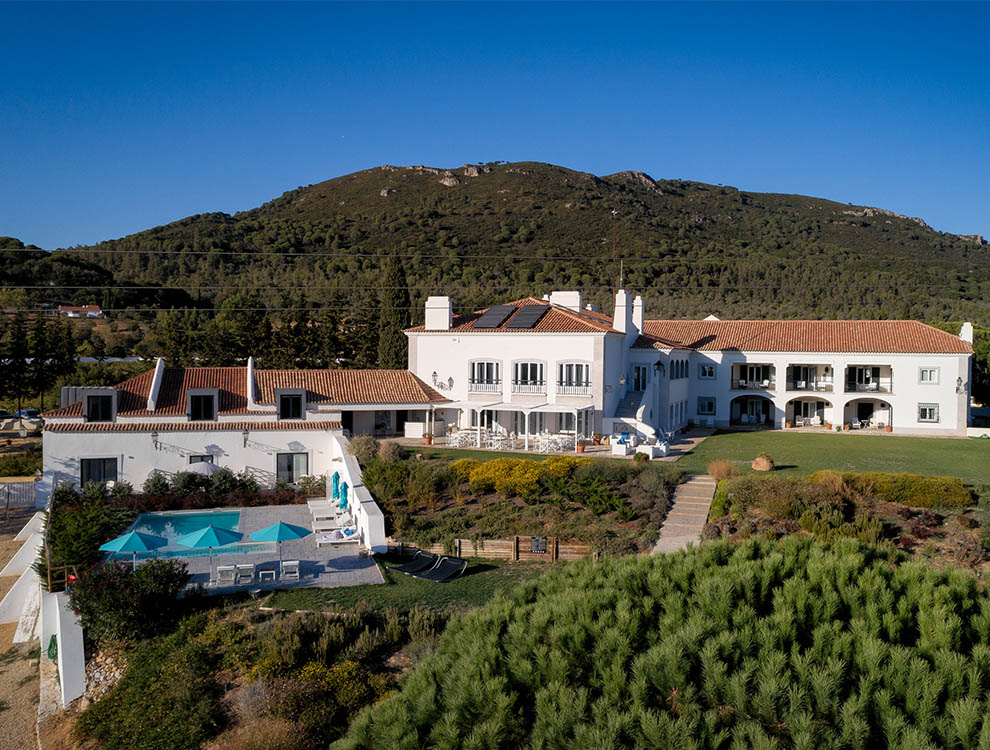 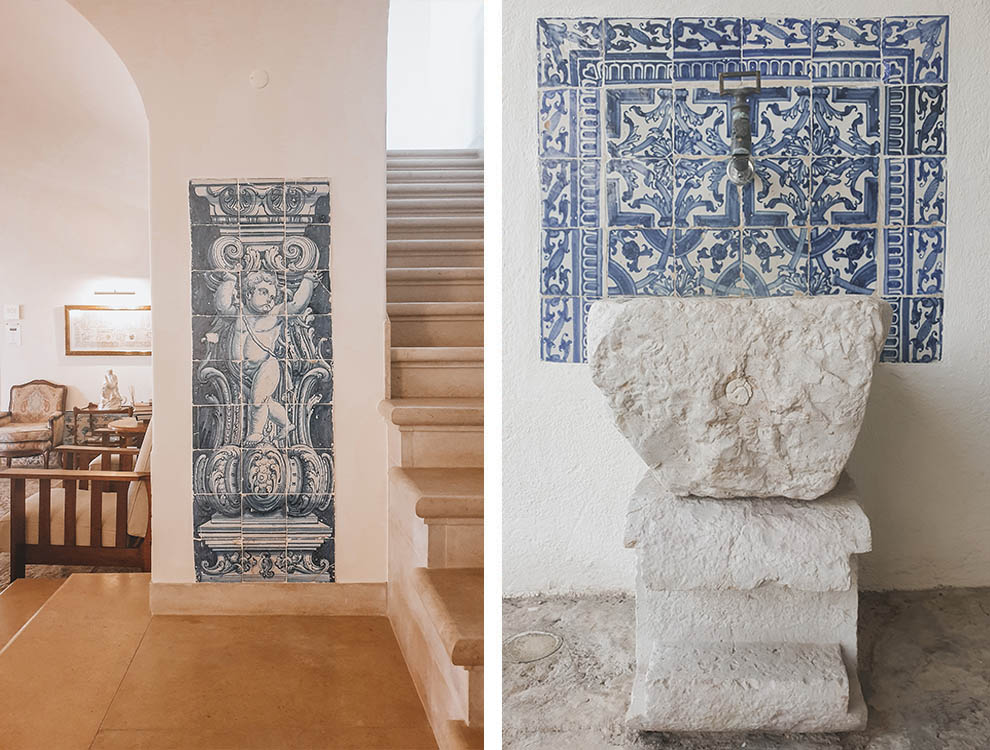 Can you tell us a bit about the history of azulejos?

The name Azulejo comes from Arabic, Azzellj which means ‘small polished stone’, and was used to designate the mosaic itself used in Byzantine art. It gained traditional status in Portuguese lands around the 16th century and became one of the most distinctive marks of Portuguese culture.

The art of tiles is rooted in the Iberian Peninsula under the influence of the Arabs, who brought the mosaics to the conquered lands to decorate the walls of their palaces, giving them brilliance and ostentation, through a complex geometric game. The style captivated the imaginations of the Spaniards and Portuguese. In the 16th century, King D. Manuel I hired Persian labourers (who had already mastered the art of mosaic) to produce tiles in Portugal.

The artisans used the Moorish technique, which took a long time, simplified it, and adapted the patterns to Western concepts. The first examples used in Portugal, the Hispanic Moors, came in the late 15th century from Seville and served to line the walls of palaces and churches. After about seventy years, in 1560, pottery workshops began to appear in Lisbon, producing tiles using the faience technique, imported from Italy. 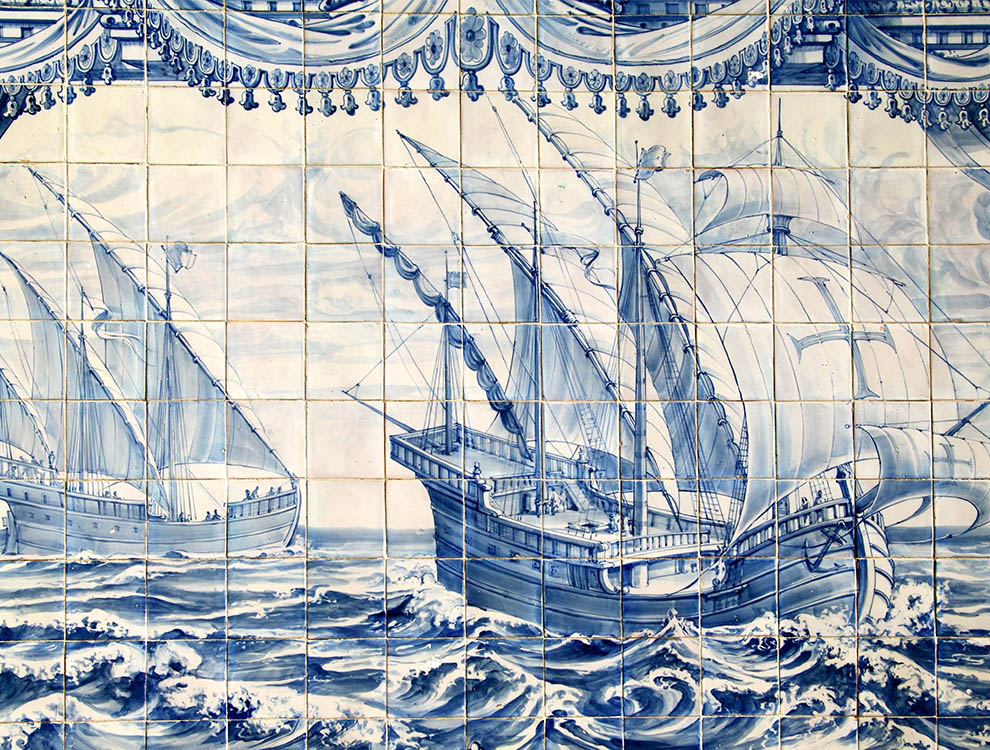 The new tile industry began to flourish with increasing orders from the nobility and clergy. Large panels were custom made to fill the walls of churches, convents, palaces, manors, and gardens. The inspiration comes from the decorative arts, textiles, jewellery, engravings, and travels of the Portuguese to the East. Large scenographic compositions appear, a striking characteristic of the Baroque, with geometric, figurative, and vegetal themes of exotic fauna and flora. When the patterned tile appeared, with emphasis on the altar fronts, this was one of the original ways of using the tile.

In Portuguese tiles, unusual scenes appear, surprising both for their originality and for the audacity of the artisan to substitute human beings for monkeys, jaguars, and hens, for example, constructing in this way fanciful, light hearted stories. The concern with bringing new themes to the decorative arts, is often based on a certain improvisation associated with this unique way of wanting to do things differently. The polychromies of yellows, greens, purplish browns, will give way to blue on a white background, two colours inherited by the Dutch influence and oriental porcelain. 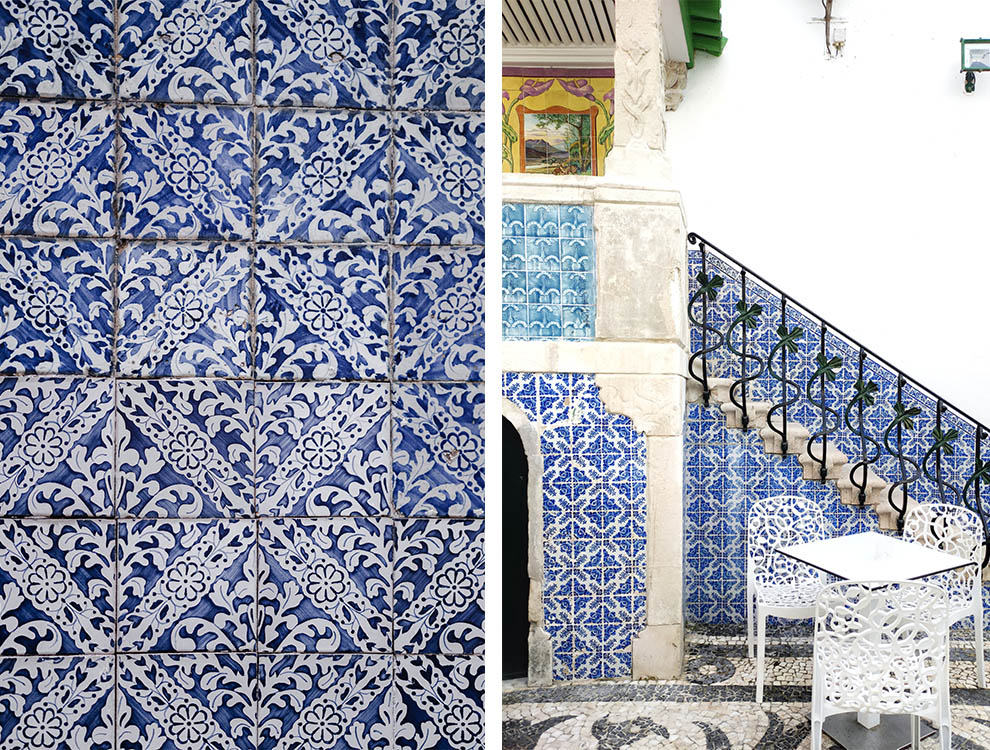 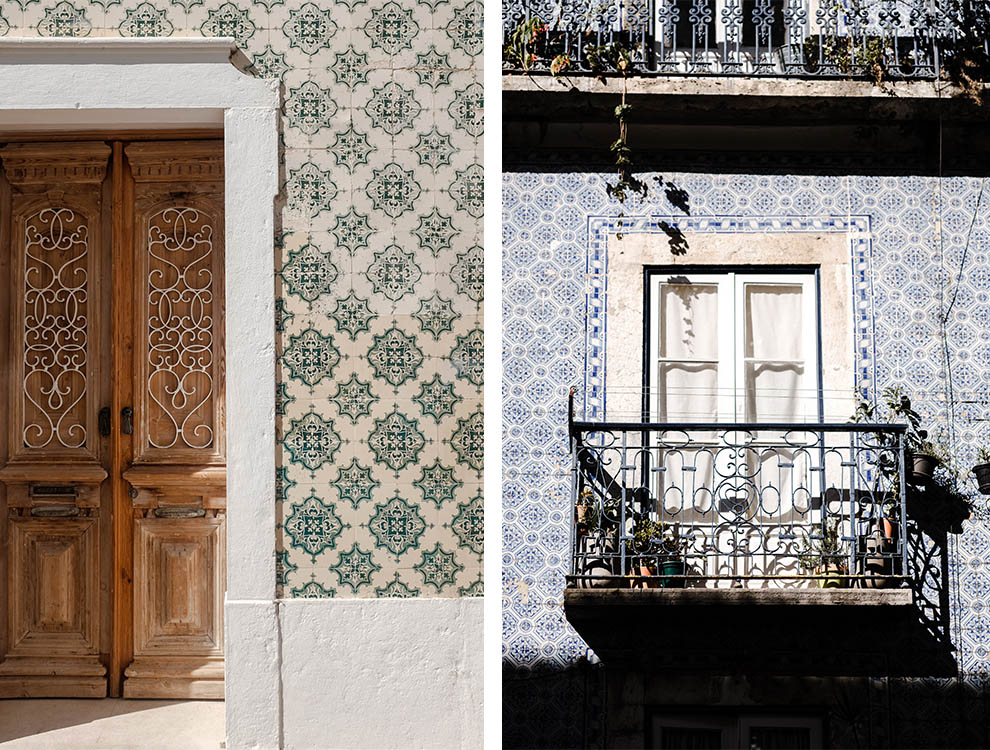 From the 19th century, the tile gained more visibility, leaving the palaces and churches for the façades of other buildings, in a close relationship with existing architecture. This hugely affected the urban landscape of major cities and villages in Portugal, giving it a very characteristic aesthetic which is now illuminated by the light reflected on the glazed surfaces.

The tile production became quite intense and new modern factories were created in Lisbon, Oporto and Aveiro. Later, by the middle of the 20th century, the tiles began to appear on railway and metro stations, some signed by renowned artists. The tradition has become even more popular, presenting itself as a decorative solution for kitchens and bathrooms, in a test of resistance, innovation and renovation of this small piece of ceramic.

Where can we see azulejos in Setúbal, and what is your favourite?

Renowned for its stalls of just-caught fish, the Livramento Market in the city of Setúbal was considered to be one of the best fish markets in the world according to the American newspaper, USA Today. Besides the fresh ingredients which can be found here, it has also made a name for itself thanks to its strikingly tiled walls. A Neo-Baroque tile panel, majolica style, in blue and white, with representations of agricultural and commercial activities, as well as a view of Setúbal from the beginning of the 20th century, contains approximately 5,700 pieces, in a total area of 117 square meters. 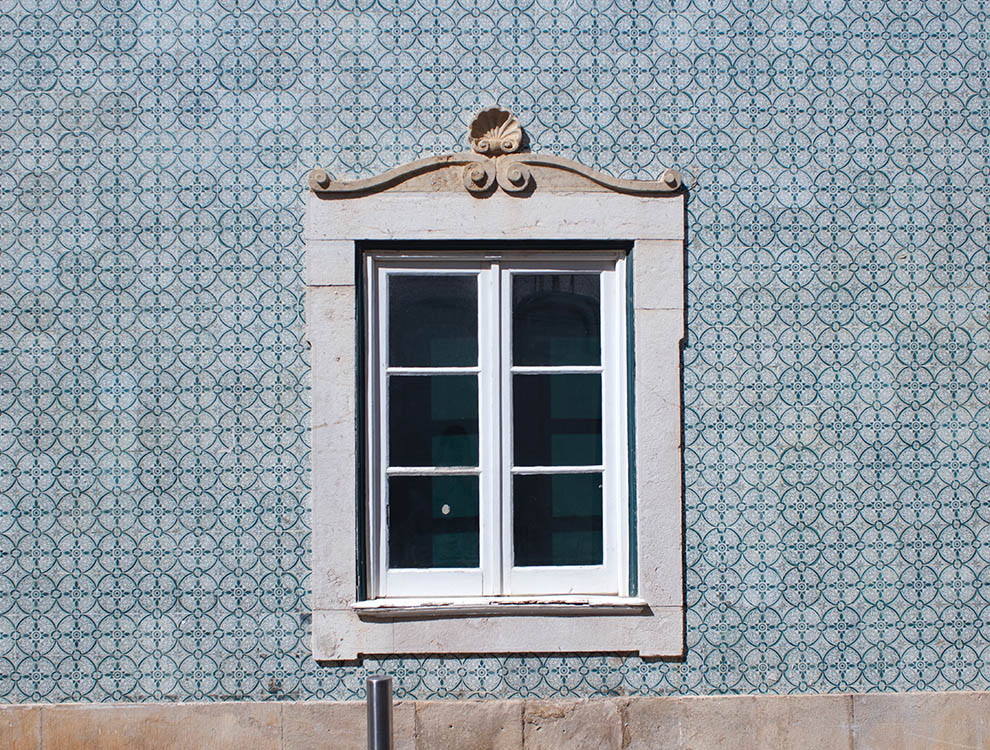 Azulejos can also be seen at Convento de Jesus with its crypt lined with Hispanic-Moorish tiles with geometric patterns, topped by a graffiti Gothic inscription “Y and F”, alluding to the Catholic Kings, Isabel and Fernando. This is the main Mudejar brand of the convent. In 2019, the Vatican distinguished the work of the Spanish researcher Carmen López Calderón with the prize of the Pontifical Academies on the tiles of the church of the Convento de Jesus, in Setúbal.

What are the traditional colours and patterns of the tiles, and do they have special significance?

The classic and most traditional tone is undoubtedly blue. This tone is achieved with a cobalt base, which at the time was already widely used by the Chinese in the production of ceramic tableware. With the popularisation of azulejo, yellow was introduced later – some say that this tone represents the wealth and social status of its owner. Green tones, achieved through copper oxide, appear in Portugal during the reign of D. Maria I, sec. XVIII, and was already widely used by the Romans to portray the emperor’s laurel wreaths. Later, the purple-brown tones were used to define contours, but also to fill areas of colour in the decorative motifs. It is believed that this shade was created in an attempt by the people of present-day Italy to reach a vivid red using a seaweed that gives it its wine-coloured tone. 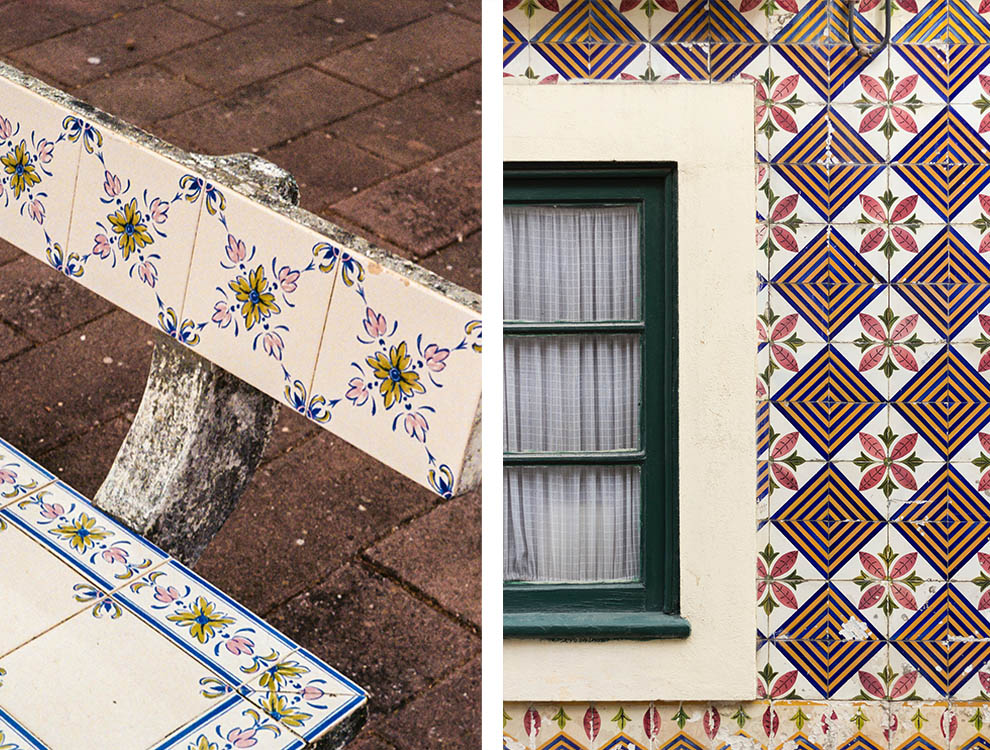 Tell us about a place only locals know about?

Built in the sec. XV, Quinta de Alcube is a popular local hangout, for those who like to enjoy moments of tranquility, gastronomy, and dolce fare niente. With experiences for all ages, your visit is always sure to be lively. In a space dedicated to little ones, there are traditional farm animals, including chickens, pigs, donkeys, and rabbits as well as some more exotic species such as rheas and peacocks. This farm is also a renowned wine producer in the region, with 100% of the production sold on-site, so it is not possible to find it elsewhere. 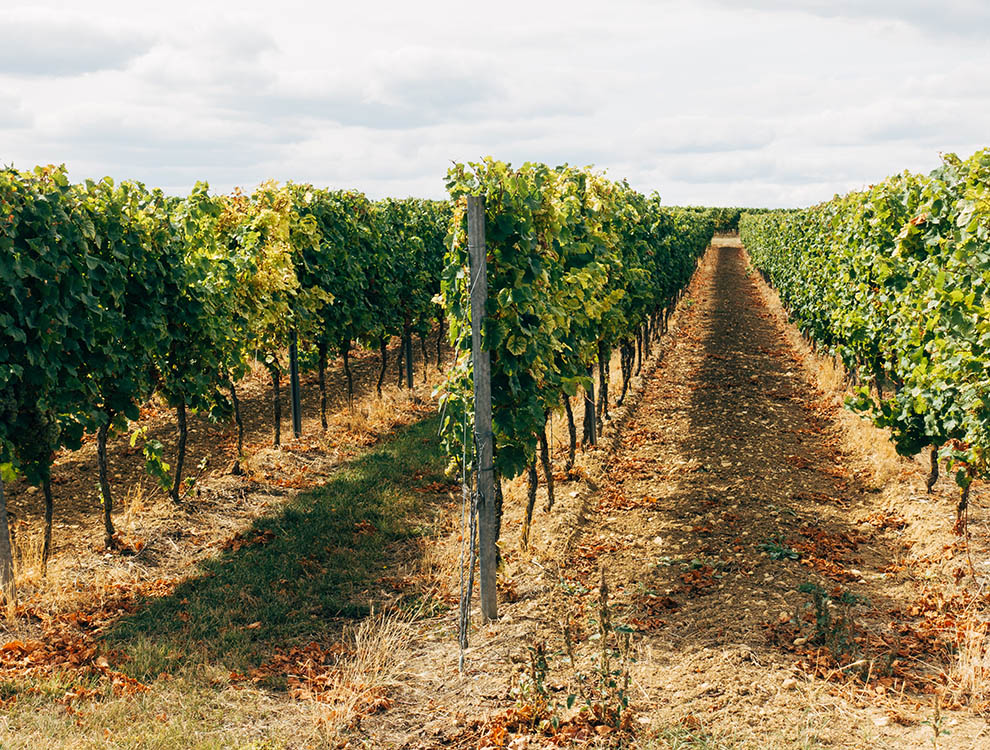 In addition to the winery and animal spaces, there are more than 200 hectares filled with vineyards, a waterfall, and two chapels brimming with history to be explored when visiting Quinta de Alcube, which is located about 2km from Hotel Casa Palmela. Right in front of the hotel, at the peak of Serra de S. Luís, lies the Park Rangers shelter. This is another special local spot thanks to the 360-degree view from where you can see Lisbon, Sintra, Sesimbra, the Alentejo plain, the Atlantic and the River Sado. The hike to this summit is well worth every minute when you’re greeted with a spectacular sunrise or sunset. With varying levels of difficulty, the summit can be reached on foot or by bicycle. Along the way it is possible to go through some disused quarries where we can still find Brecha da Arrábida (commonly known as Marble of Arrábida) that can only be found in this region and its extraction is now prohibited.

Setúbal is also known for its seafood – which local dishes do you recommend, and where are the best places to eat?

The fish auction that takes place during the night in the Setúbal fish market is a local secret. Docapesca, an organisation under the responsibility of the Ministry of the Sea, is responsible for the first sale of fish. This makes it possible to visit the auction during the night when the fish reaches the land by the hand of local fishermen. A must-do experience for night owls, as the auctions take place between 9pm and 2am. 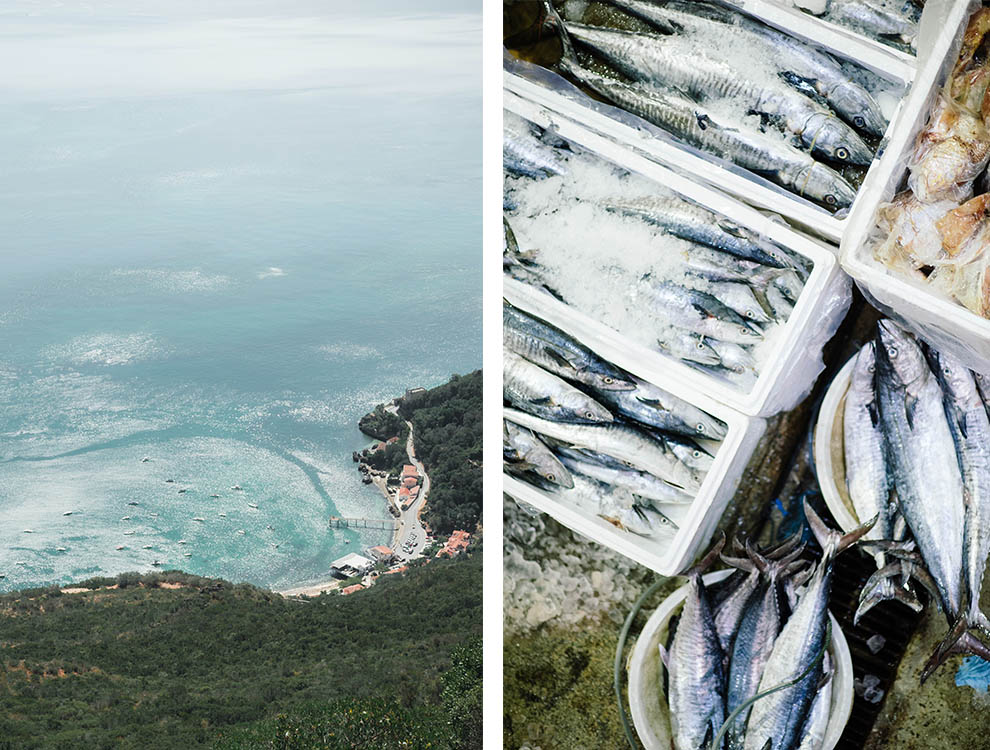 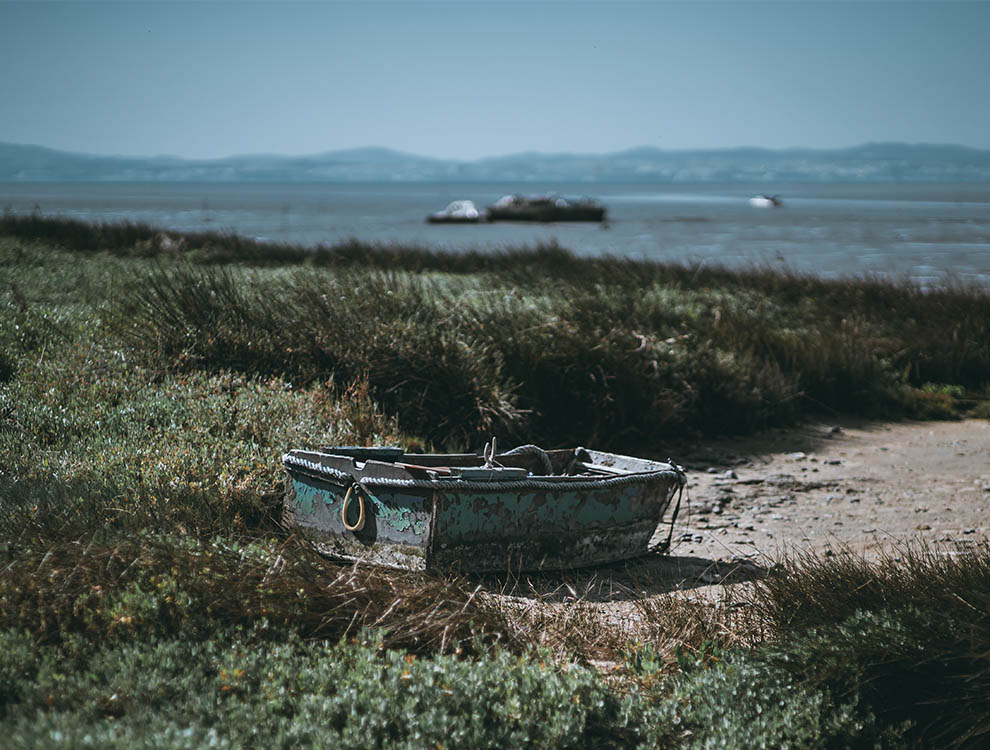 Any fish or seafood from “our Atlantic” is always welcome, including sardines on bread and choco frito (fried cuttlefish), two of our favourite local delicacies. Casa Janeiro, Ramila or the typical Portuguese tasca in Setúbal are all great spots to try our seafood.

A closer look at the tile-making process…